The first step is to take apart the pallet. There are a number of ways to do this. The first is to use a crowbar to pry the boards apart. We talked about this technique in our last pallet project. Today we’re going to talk about a different method: using a reciprocating saw (also called a Sawzall) to cut through the nails holding the pallet together. This takes a little more confidence in using power tools, but it does make it really easy to keep the boards in one piece. Our friend Jon helped us prep for this pallet project by showing us the technique and cutting the pallet board for our project. Thanks, Jon! 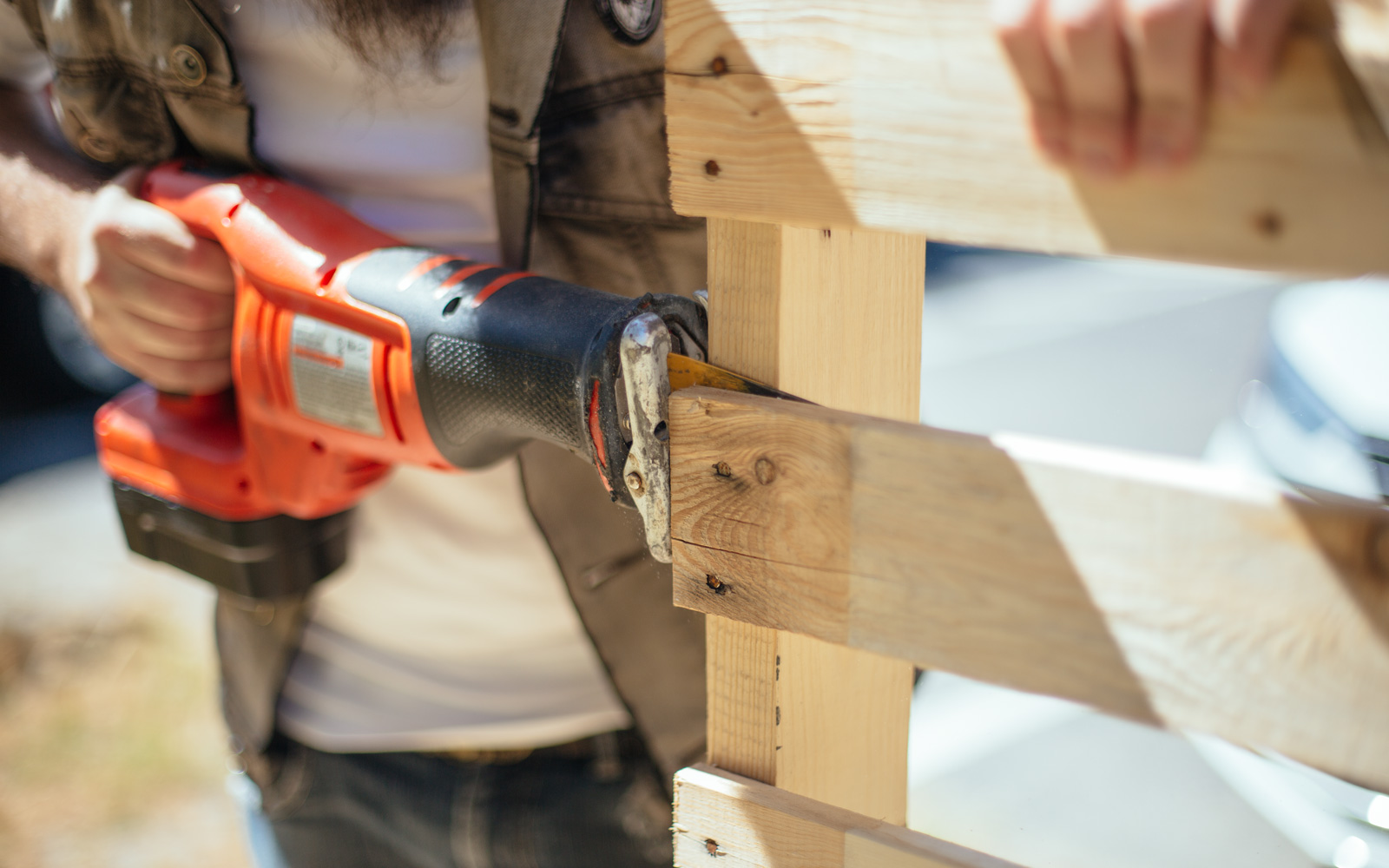 Hold your pallet vertically. You may need to grab a friend to help you hold the pallet in place. Next, attach a 5" or larger blade to your Sawzall. You can use a metal or universal blade. Wedge the blade in between the pallet slats and the two-by-four supports and cut straight down. Do this on each of the four areas where the cross beams are attached.

For this project, we used a double pallet that measured about 5 1/2' feet long. This gave us the right proportions to use 13 boards: one for each of the stripes on the flag. The official ratio dimensions of the American flag are 1:1.9; ours turned out closer to 1:1.5, but the ratio is close enough to distort the look of the end product.

Lay out a large plastic tarp in preparation for painting. Before you start, be aware that dealing with old pallet wood means that your results will vary. It’s fun because you never quite know what you’ll get in the end. So keep your mind open, and be happy with your one-of-a-kind piece.

Shake up the can of primer and following the steps on the label, apply the primer to the boards. An easy way to get an even coat is to spray each board individually, using short sweeping motions across the width of the board and moving down the length of the board. We had to use two cans to get good coverage (though the wind may have played a hand in this). Remember that it’s better to apply several light coats to build up that coverage than one thick coat. Allow the primer to dry for the allotted time—most manufacturers suggest you apply your additional coats of paint within an hour.

Since we’re going for an older, weathered look we picked an ivory color for the stripes and stars as opposed to a bright white. We’re using this as a base for even the red and blue to create the effect we want. If you have any interest in creating a more weathered look, you can do some sanding later. You can get a three-dimensional look with the topcoat color, the white underneath, and then the bare wood. Allow the paint to dry. 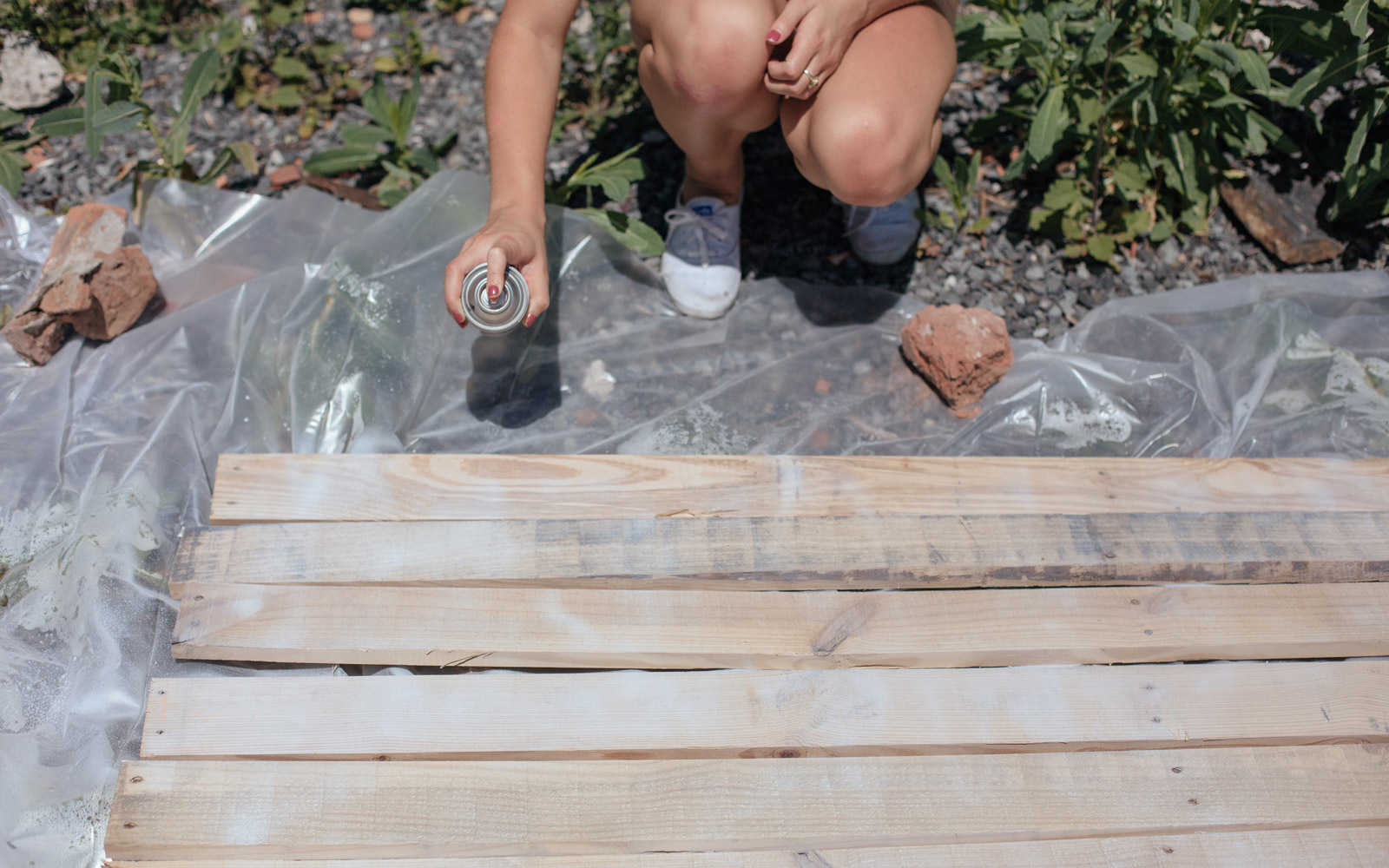 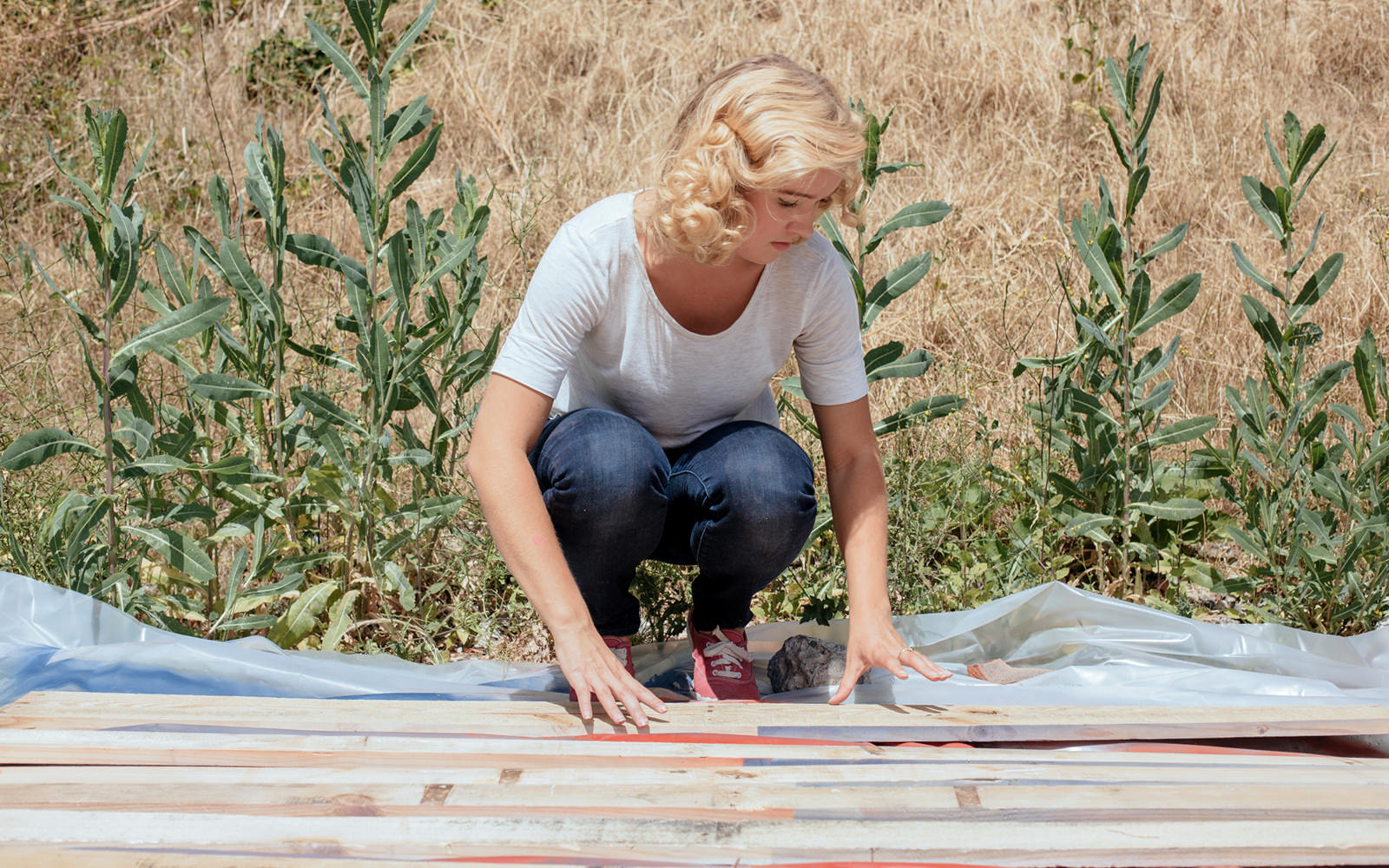 Once you allow the ivory or white paint to dry, lay your boards out again. At this point compare the different ways the boards accepted the paint. Because they’re rough boards, some will likely turn out darker and others lighter. This isn’t a problem. Just make sure that you spread them out so that the darker and lighter are intermingled. This will make it less noticeable and, once again, add to the character of the final product. Pick which boards you want to paint red; this is a great chance to recoat the boards that ended up at either extreme. 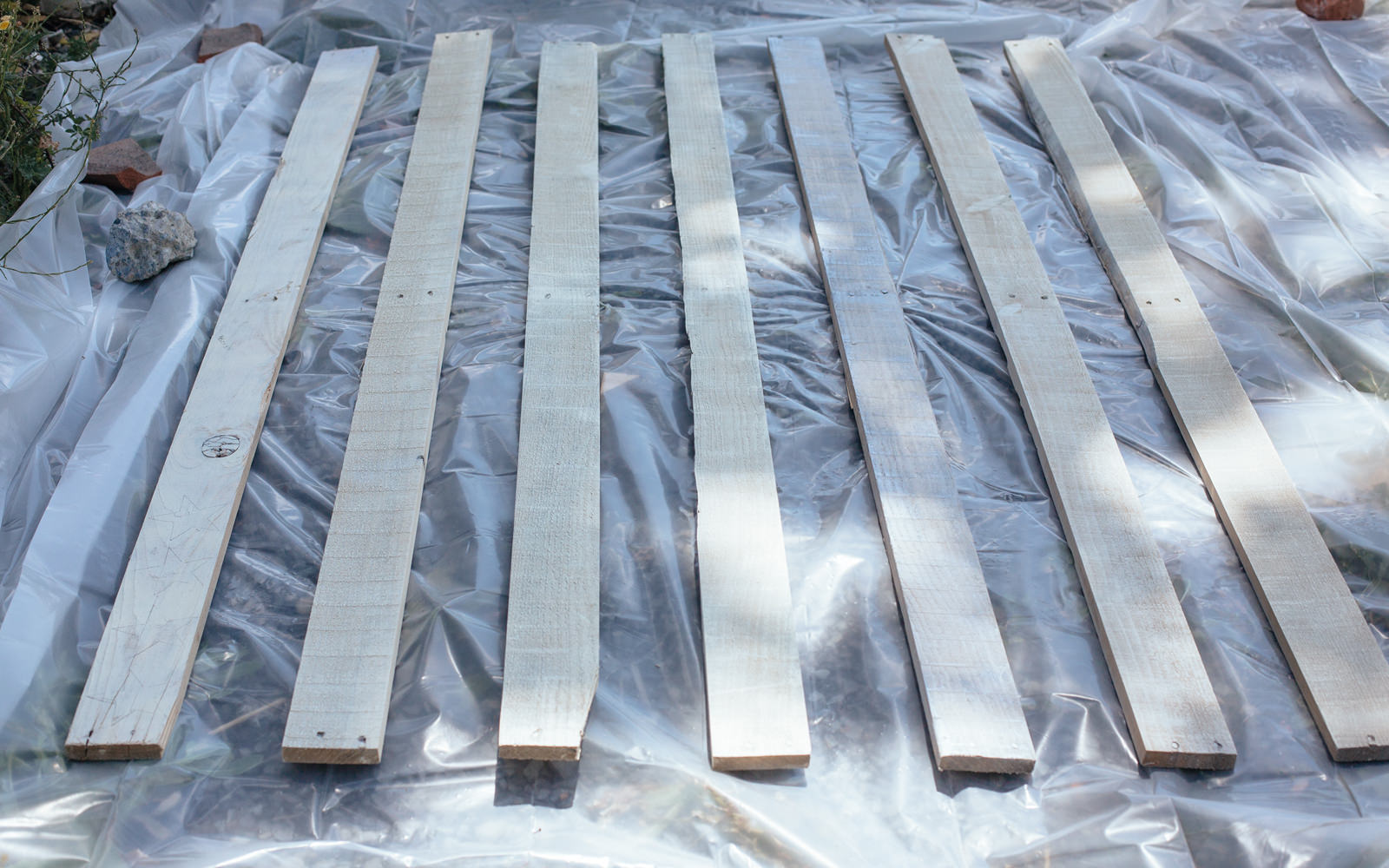 Before you begin with the red stripes, tape off the corner for the blue paint. If you’re using your own template for the stars, you’ll need to calculate the size yourself. We made a star template that was 3 1/4” wide. We put a 1/2" gap in between each star in the row and we made six rows of eight—each row on its own board. This makes two adjustments to the official US flag: First, there are only 48 stars. Thus, this is the design of the flag from 1912 to 1959. Secondly, the stars only take up six rows of stripes, opposed to in the actual flag where they take up seven. We liked the way it looked better when each row of stars was taking up a board and not bridged between two. So you’re welcome to make changes, but the area we taped off was 31 1/2” long and six boards wide. We started by taping off the boards that would be painted red, and later added the white boards and made those measurements.

Once the blue is taped off you can apply several light coats of red. You may find that some boards require more coats than others. Adjust to the wood that you’re dealing with and do your best. Allow the paint to dry. 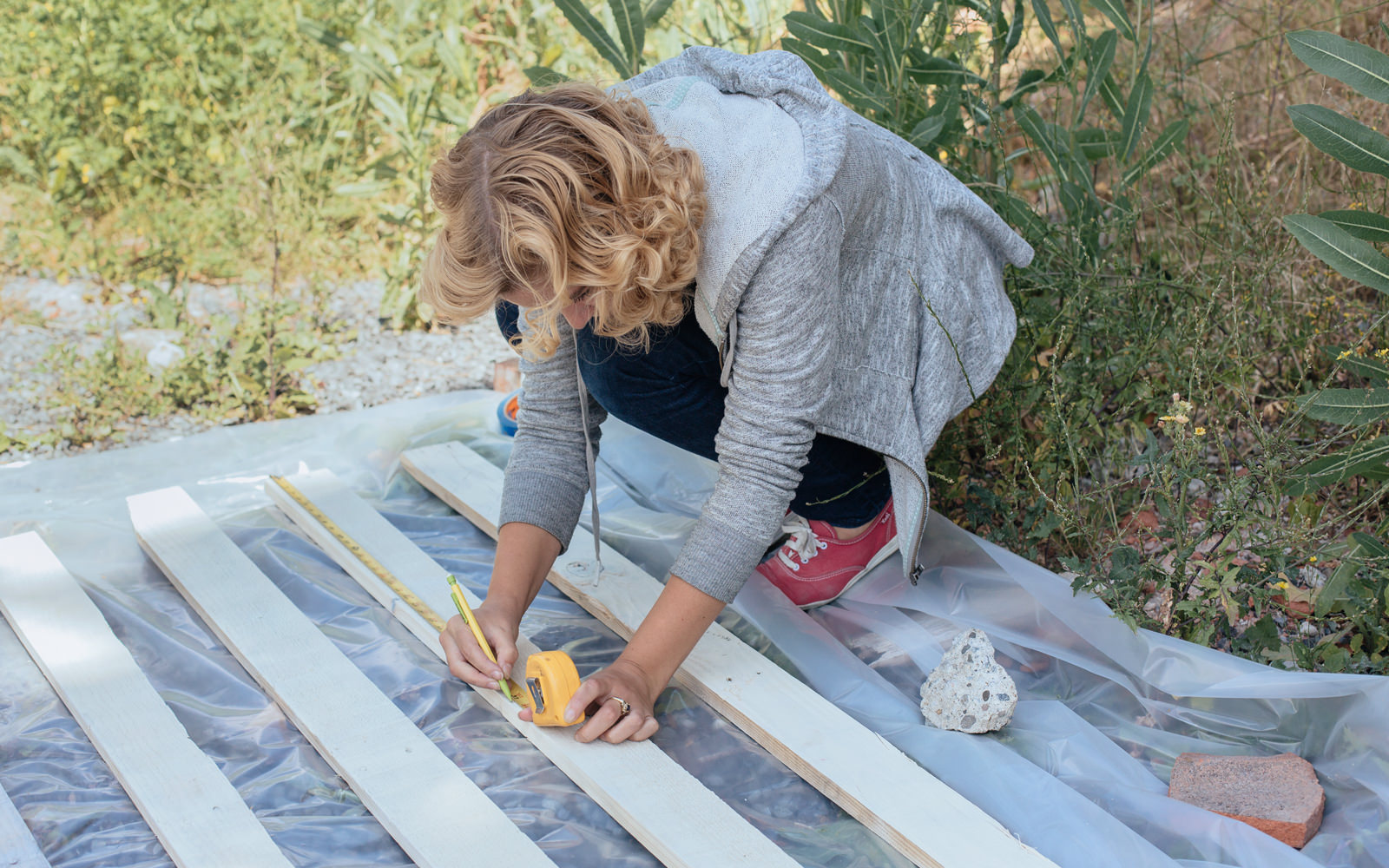 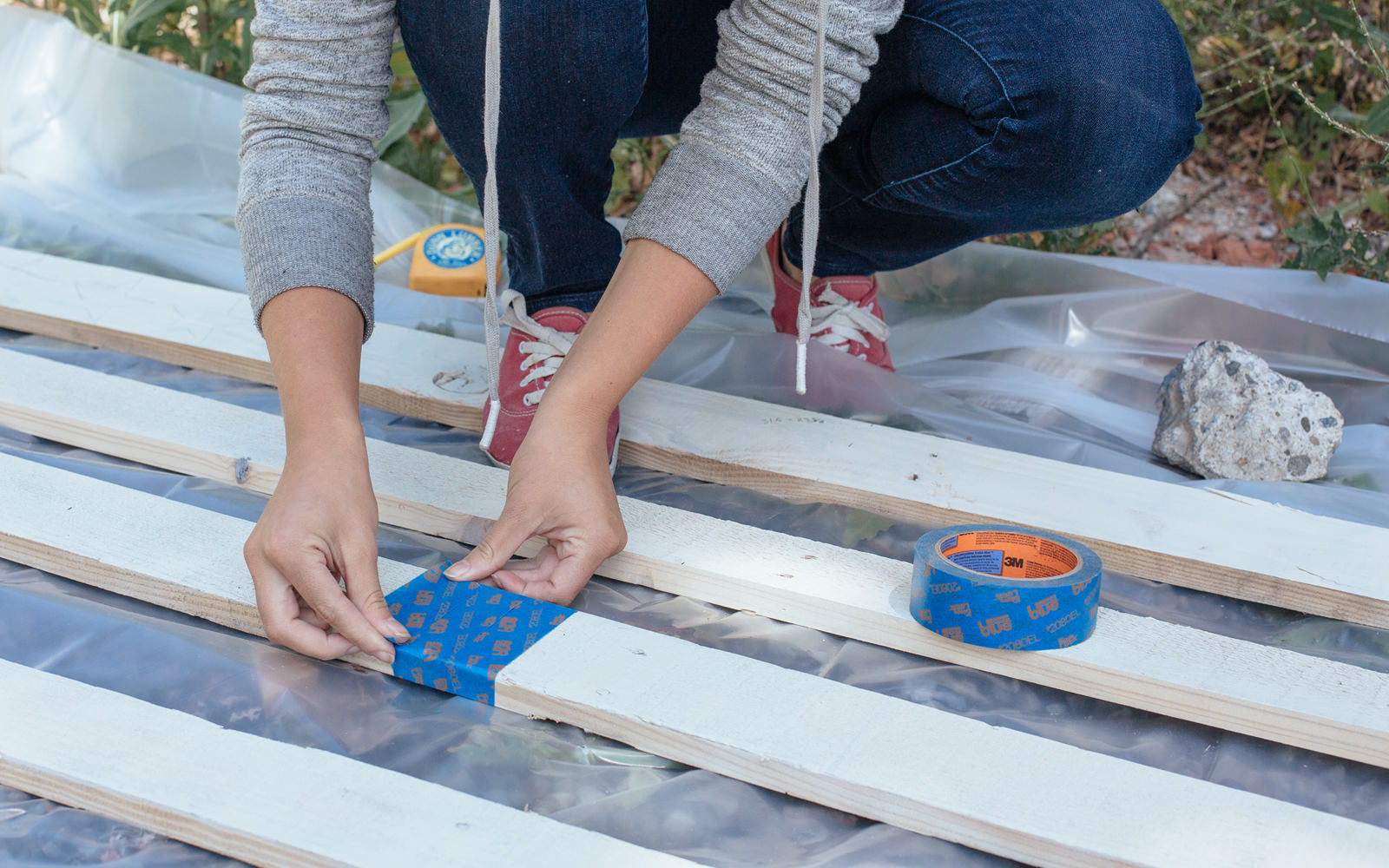 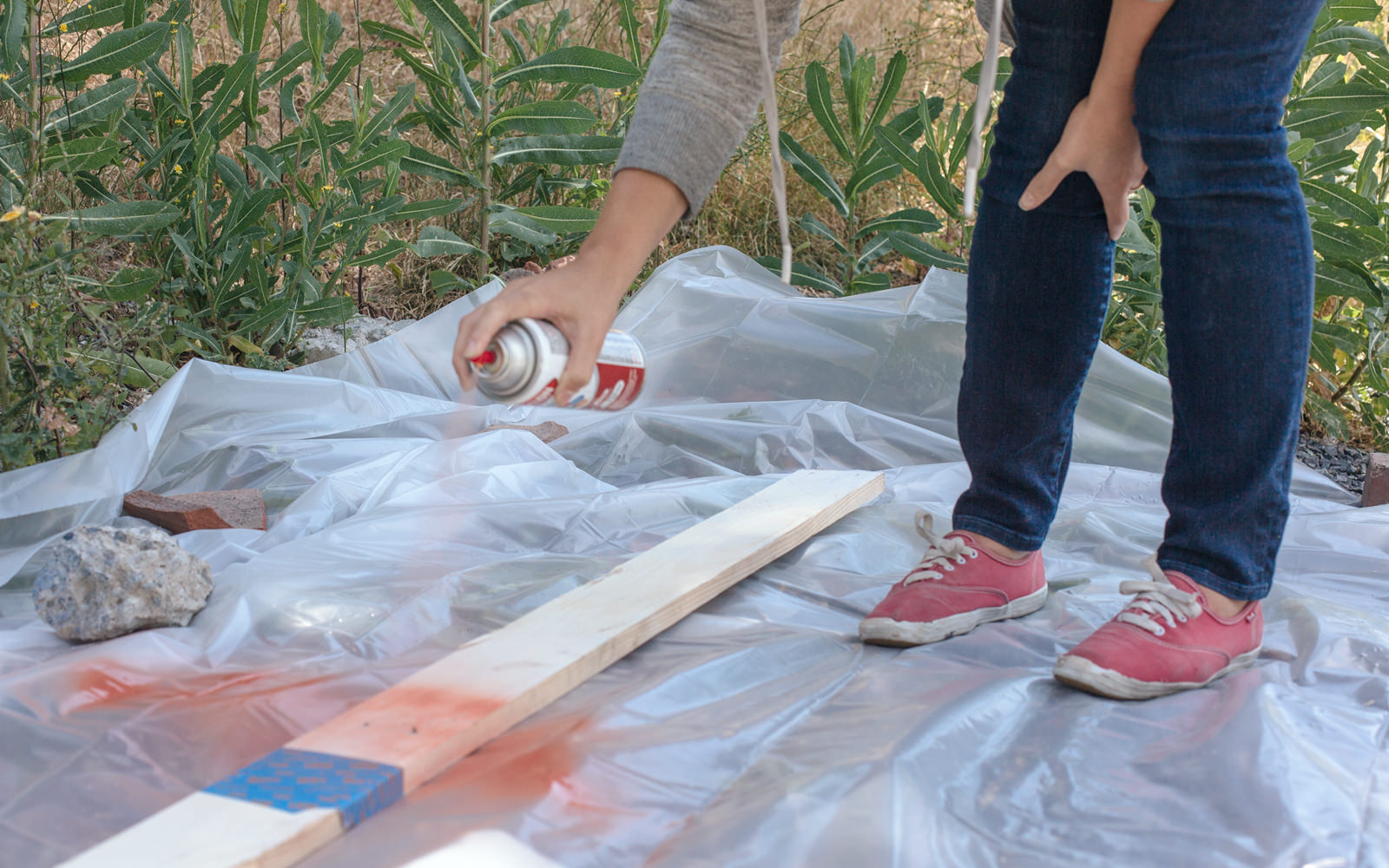 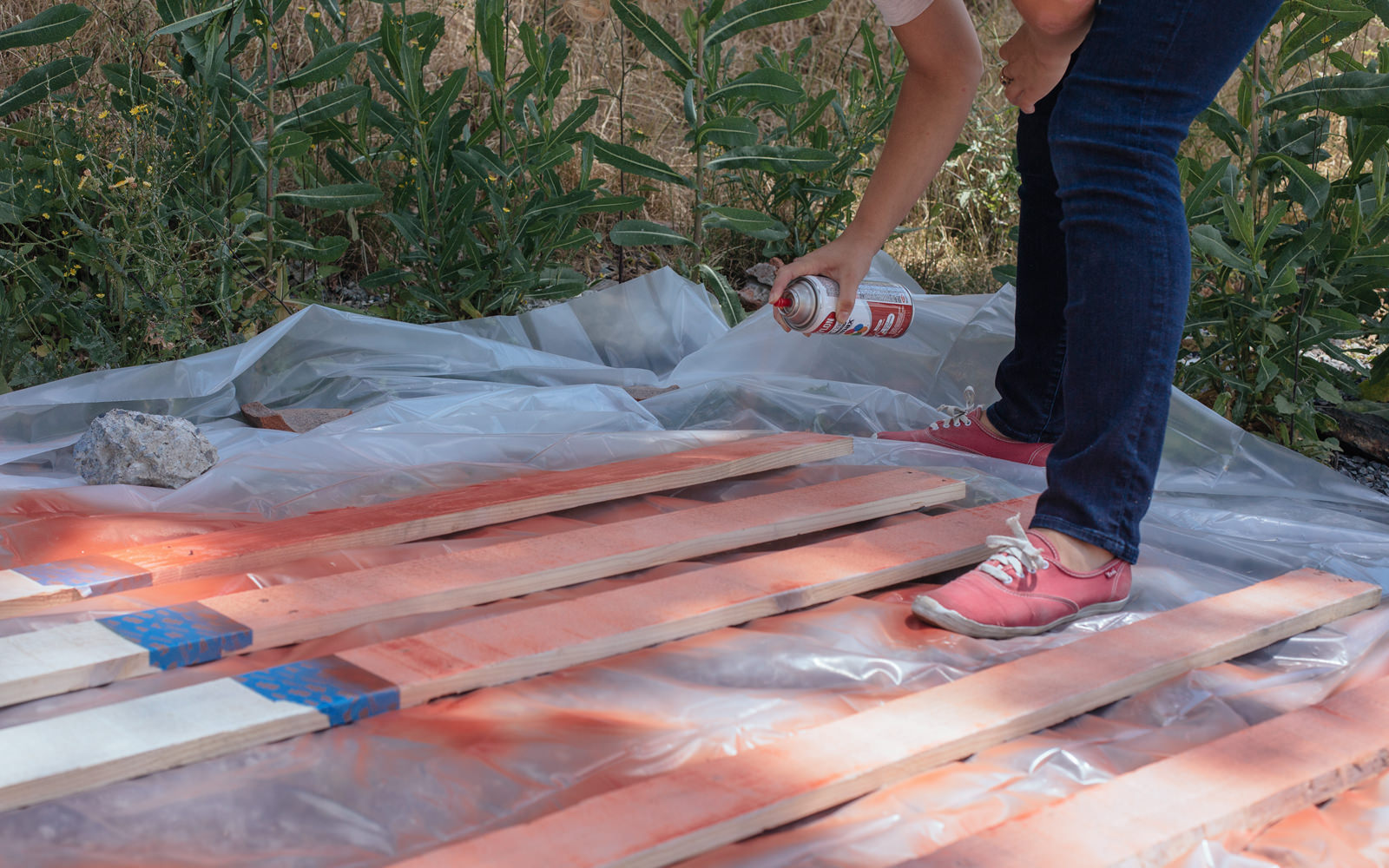 Bring the white stripes back in place and measure and tape off the area that will be painted blue. The area we taped off was 31 1/2” long and six boards wide. 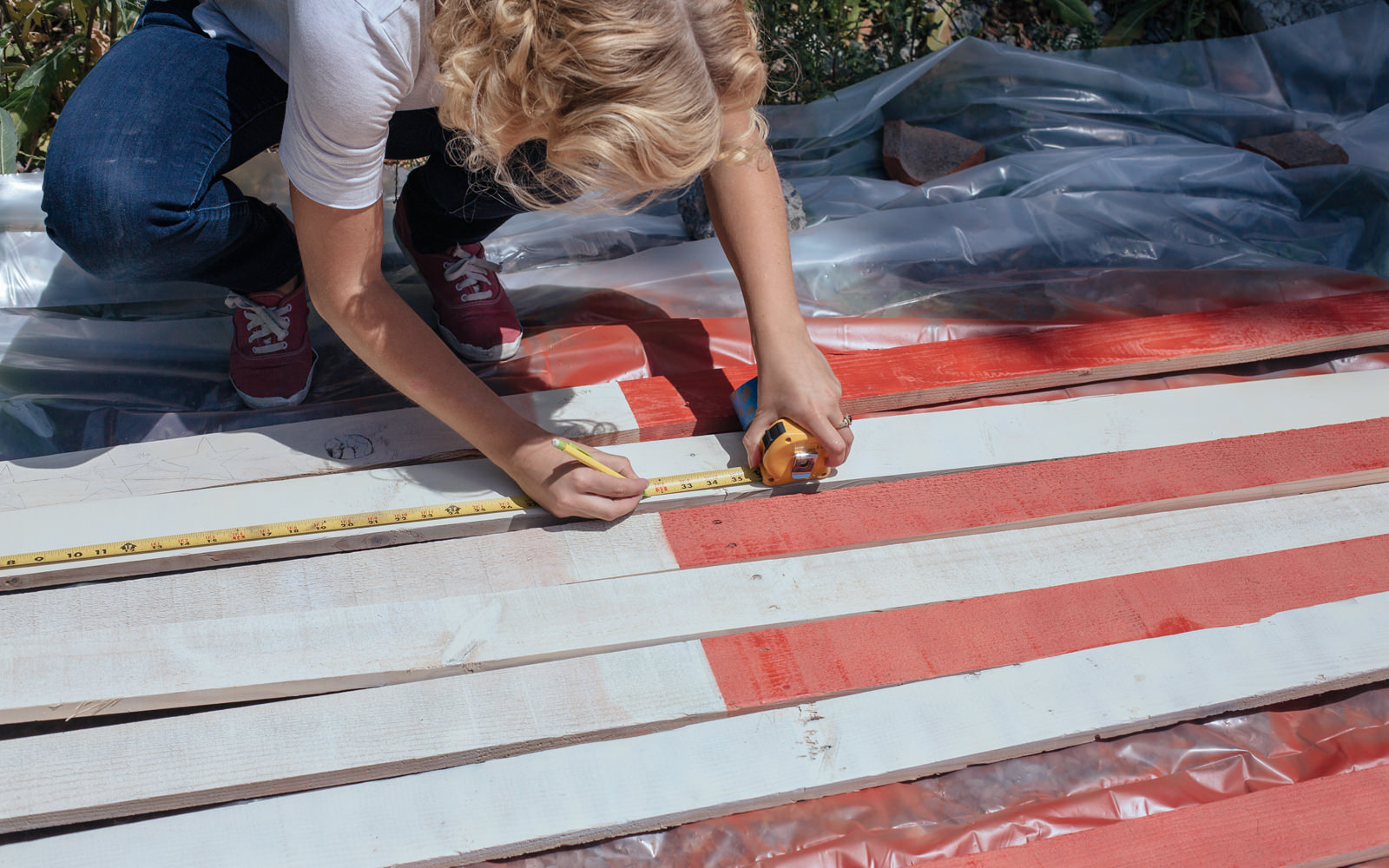 Make sure that the red paint has time to dry since we’ll be taping over it to apply the blue paint. Use newspapers or masking paper to cover up the red and white stripes. Don’t forget to shake the can and apply the blue paint according to the manufacturer's instructions. Allow to dry well. 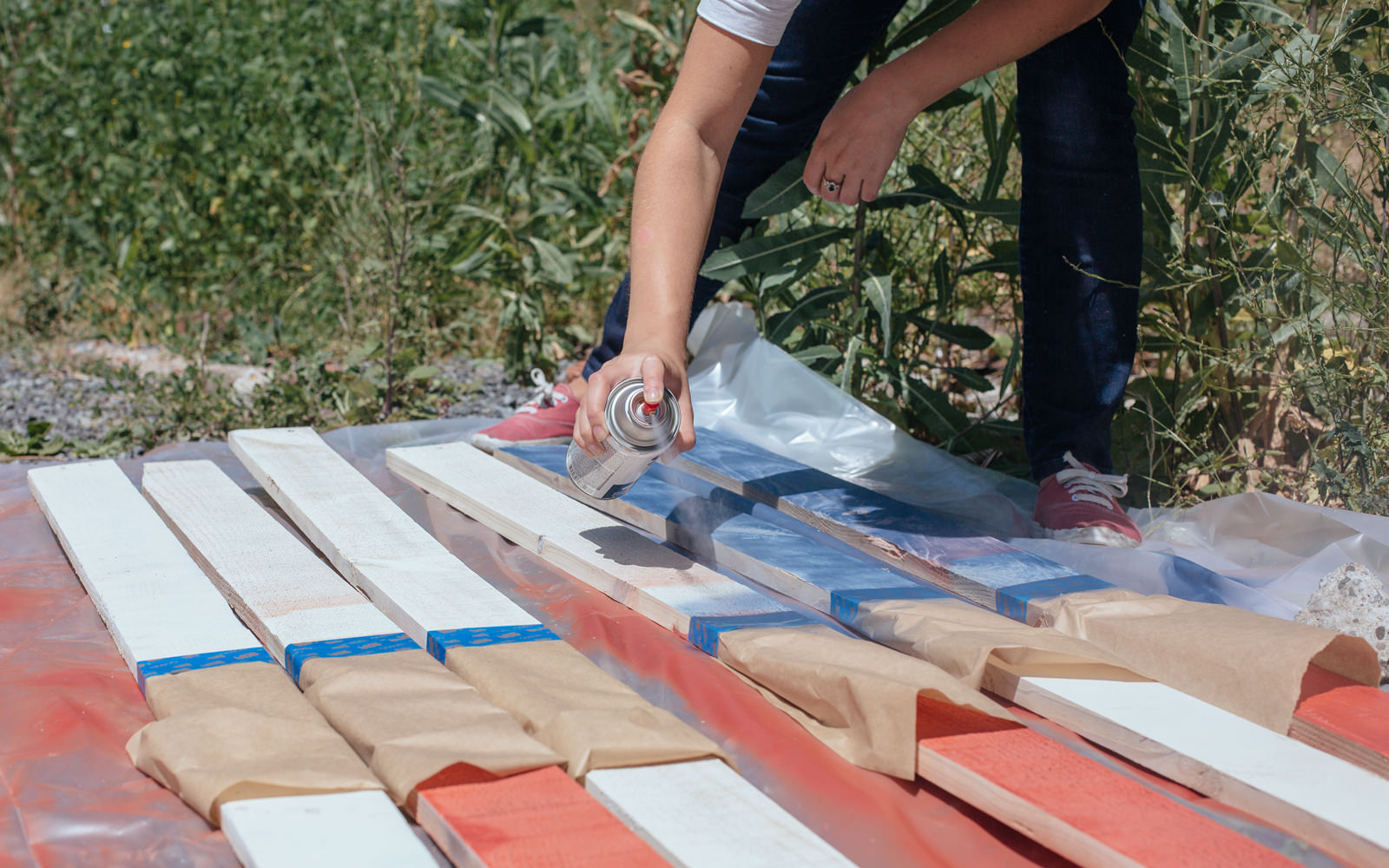 Next, it’s time for assembly. You will need two 44 1/2” lengths for the supporting beams. You can either cut these out of an 8' two-by-four, or you can use some of the two-by-four pieces from the pallet. Be warned though that these boards are full of nails and will require some strategic cutting and drilling. We used the pallet boards, but for the low cost of a two-by-four, it didn’t really seem worth the effort. Measure and cut the two-by-fours to the correct length. Turn the pallet boards face down and line up the supports on either end several inches in from the edge. When you lay the boards face down make sure that the blue is on the correct side. This means flipping the boards lengthwise so that the blue is underneath the upper right-hand section. 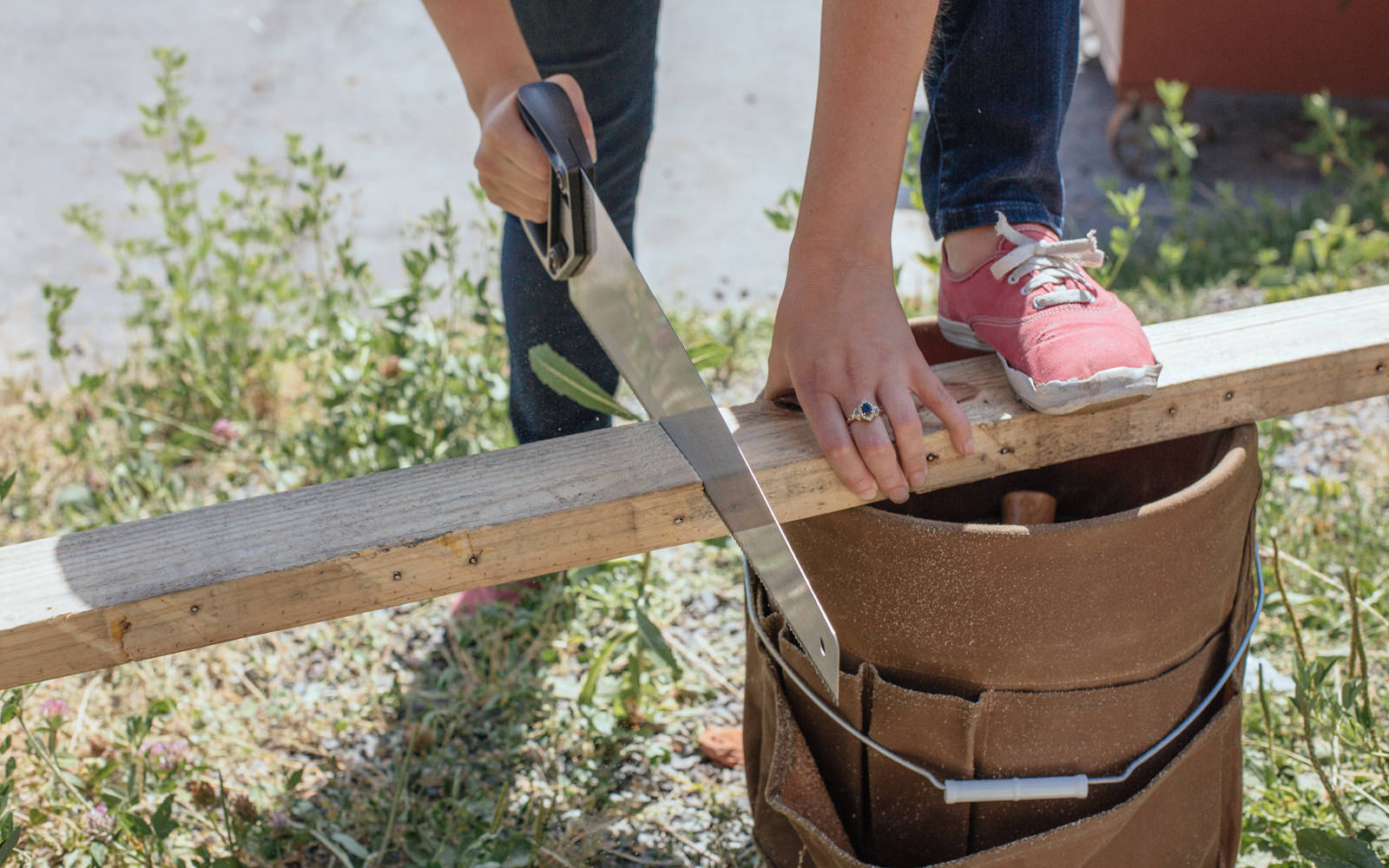 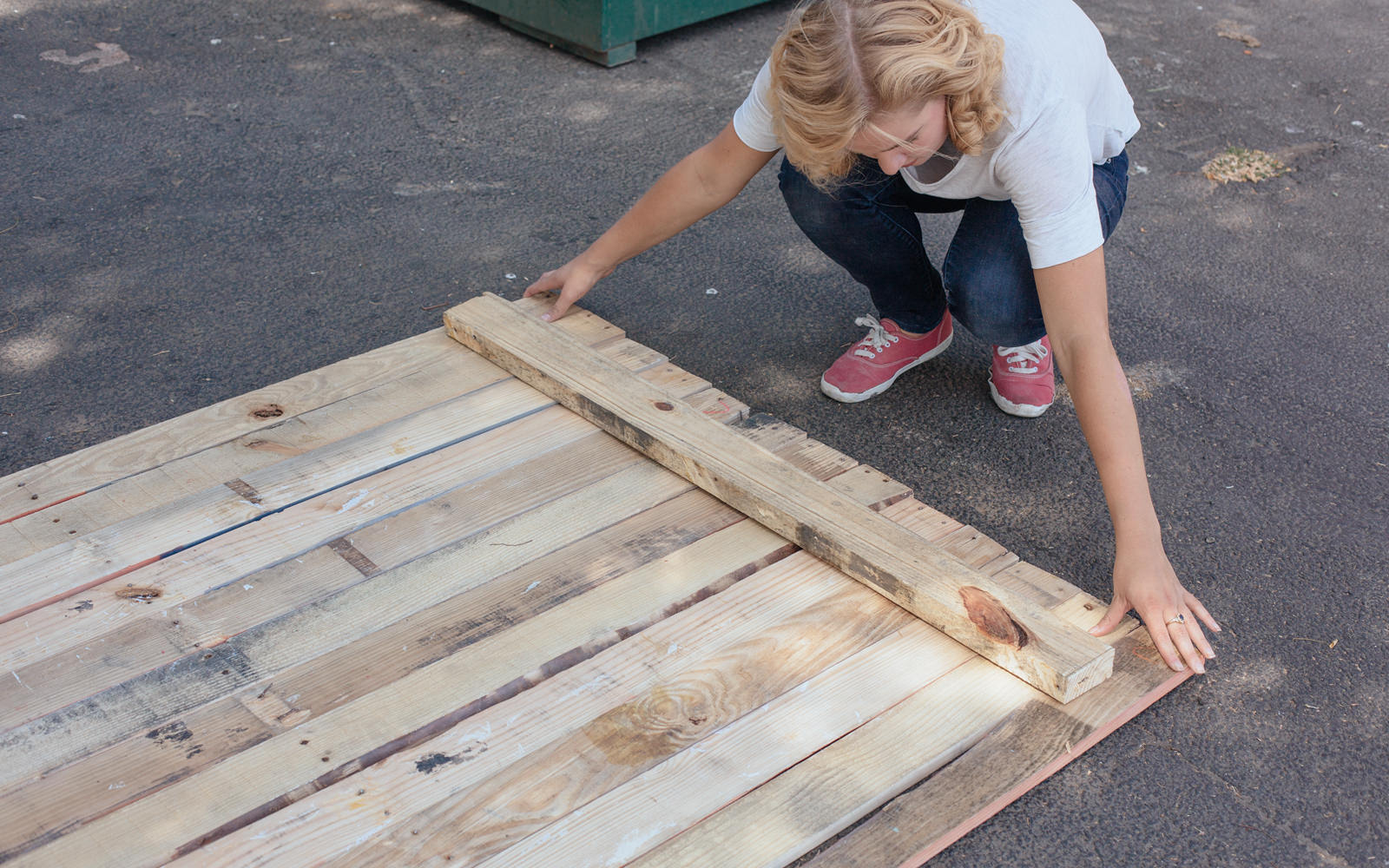 With the supports in place, pre-drill 26 holes into each two-by-four: two holes into each front-facing piece. Use a drill bit slightly smaller than the screw and make sure it’s shorter than two inches or tape it off. Apply pressure to the two-by-four for a tight fit with the facing and secure with screws.

For added support and strength you can add a third middle support. This is entirely up to you. 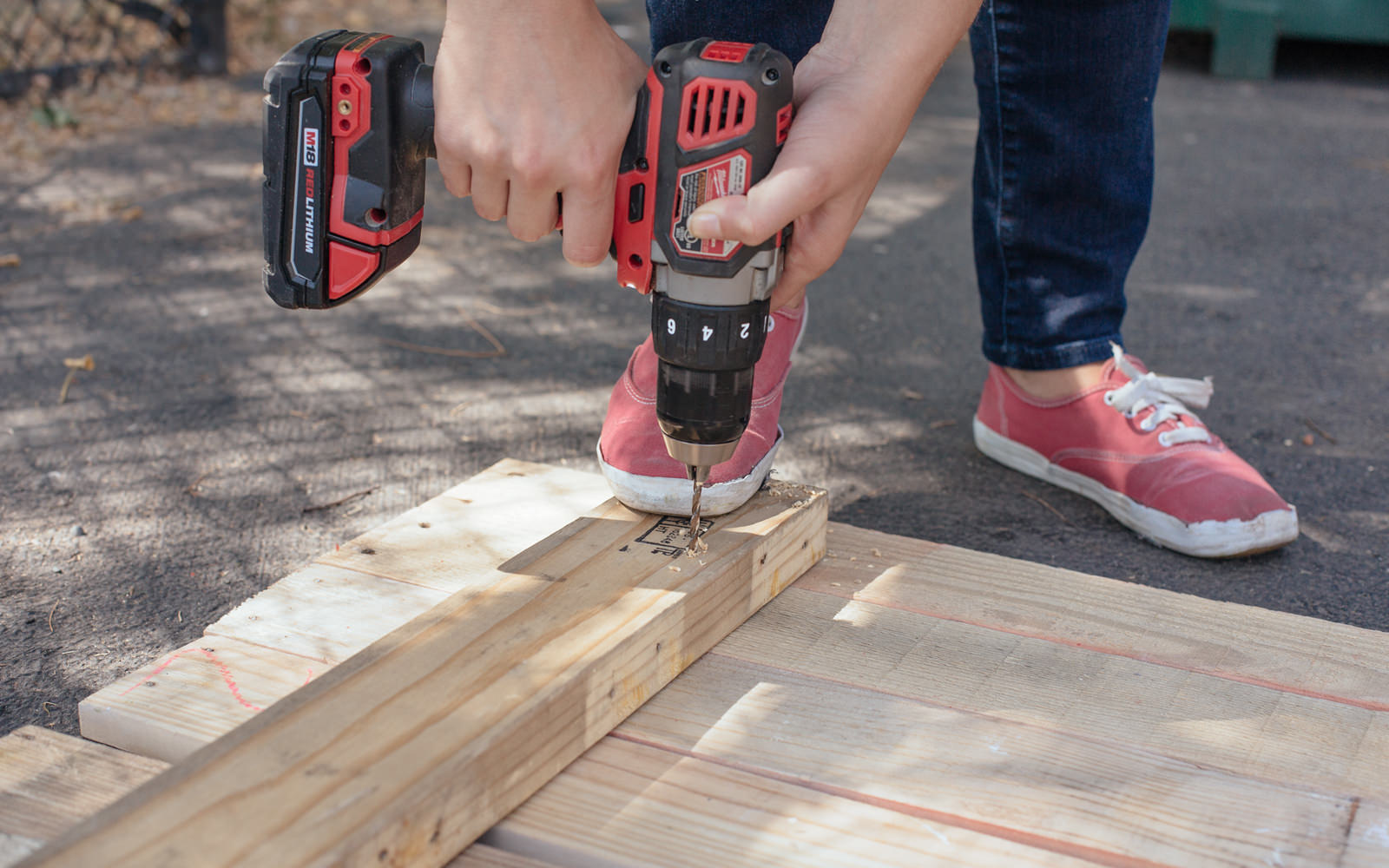 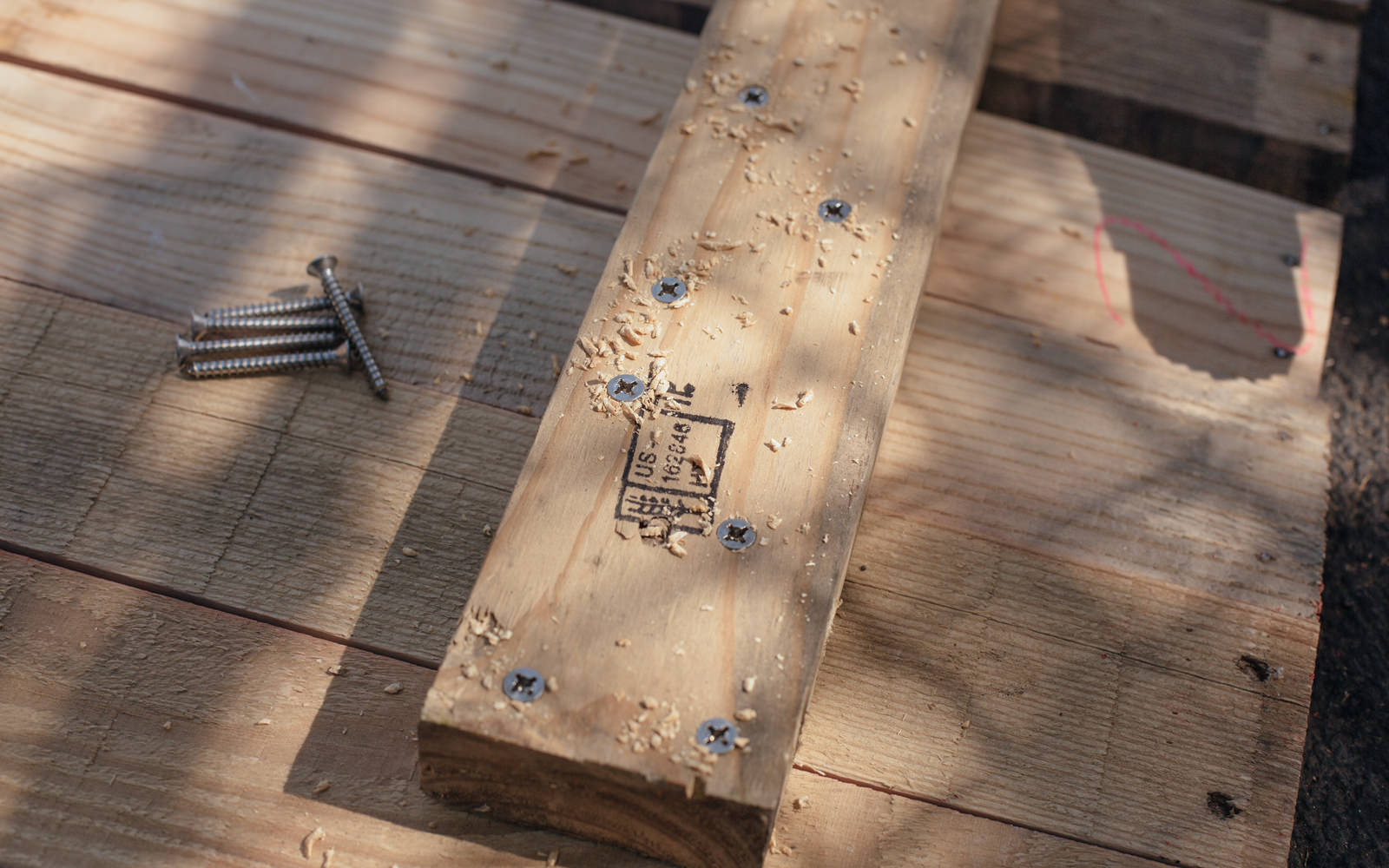 The last step is the stars. Use newspapers or masking paper and painter's tape to tape off around the blue section. If you find that painter’s tape doesn’t stick you can use a stronger blue tape. Cut out the stencil and line it up in the upper left-hand corner. Shake up a can of ivory spray paint and put on some work gloves. Cover up the surrounding area near the star stencil with paper or newspaper. Use your gloved hand to hold down the stencil. If you can’t hold down all the corners at once, spray the paint away from the lifted corner not towards it. This will help keep a clean line. If you don’t spray too heavily you should be able to move along each row pretty systematically, gently laying paper over the last star without applying pressure.

We found that after a row or two, the glove and stencil adhered to each other. This actually made the process a lot quicker. Close to halfway through the stars, the stencil got very goopy and started leaking paint. At this point you have a couple of options: you either can cut out a new stencil or you can wipe off the original one and leave it to dry for a few minutes. Either way, you’ll probably need to switch out your glove at least once and the surrounding protective paper several times. 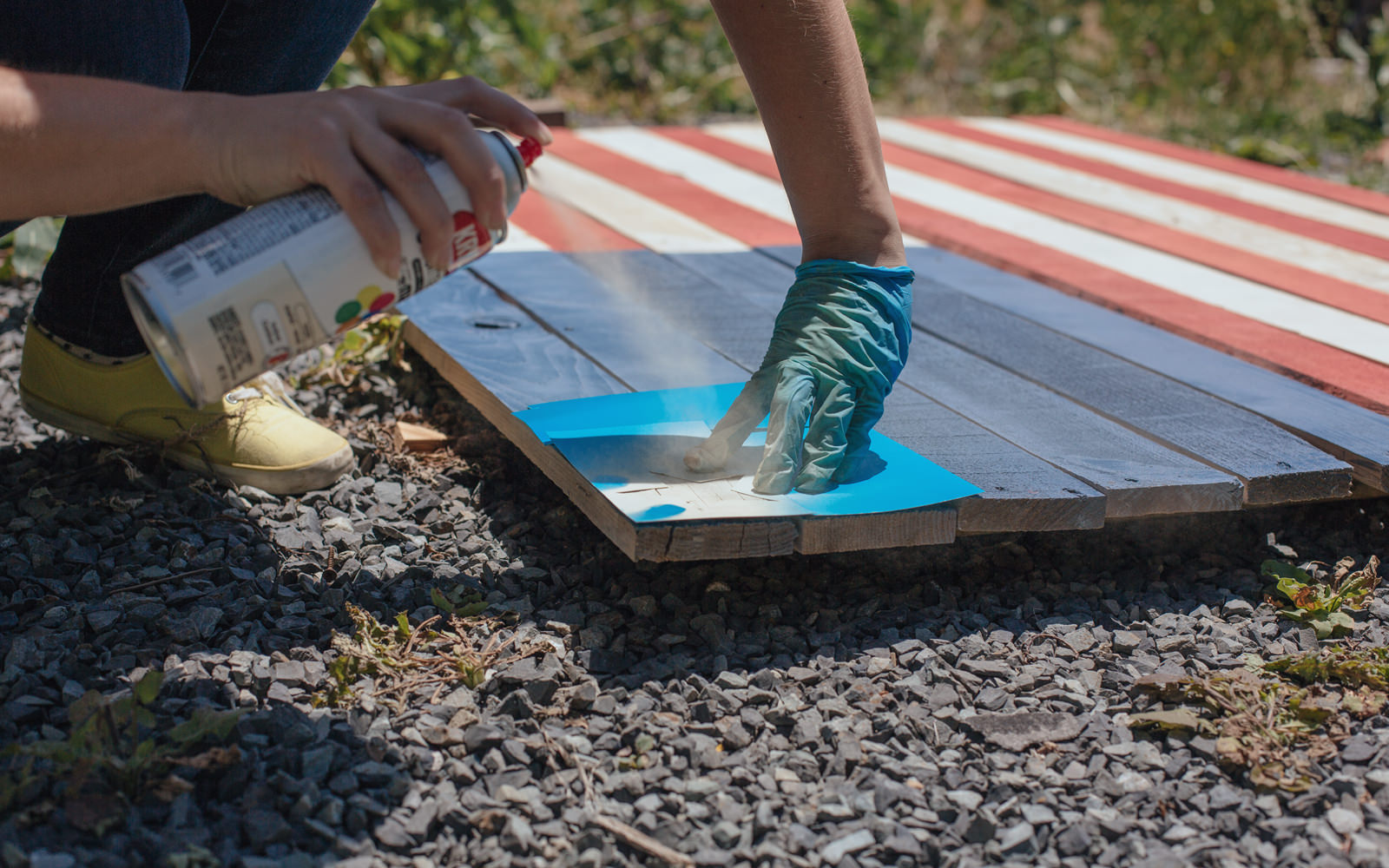 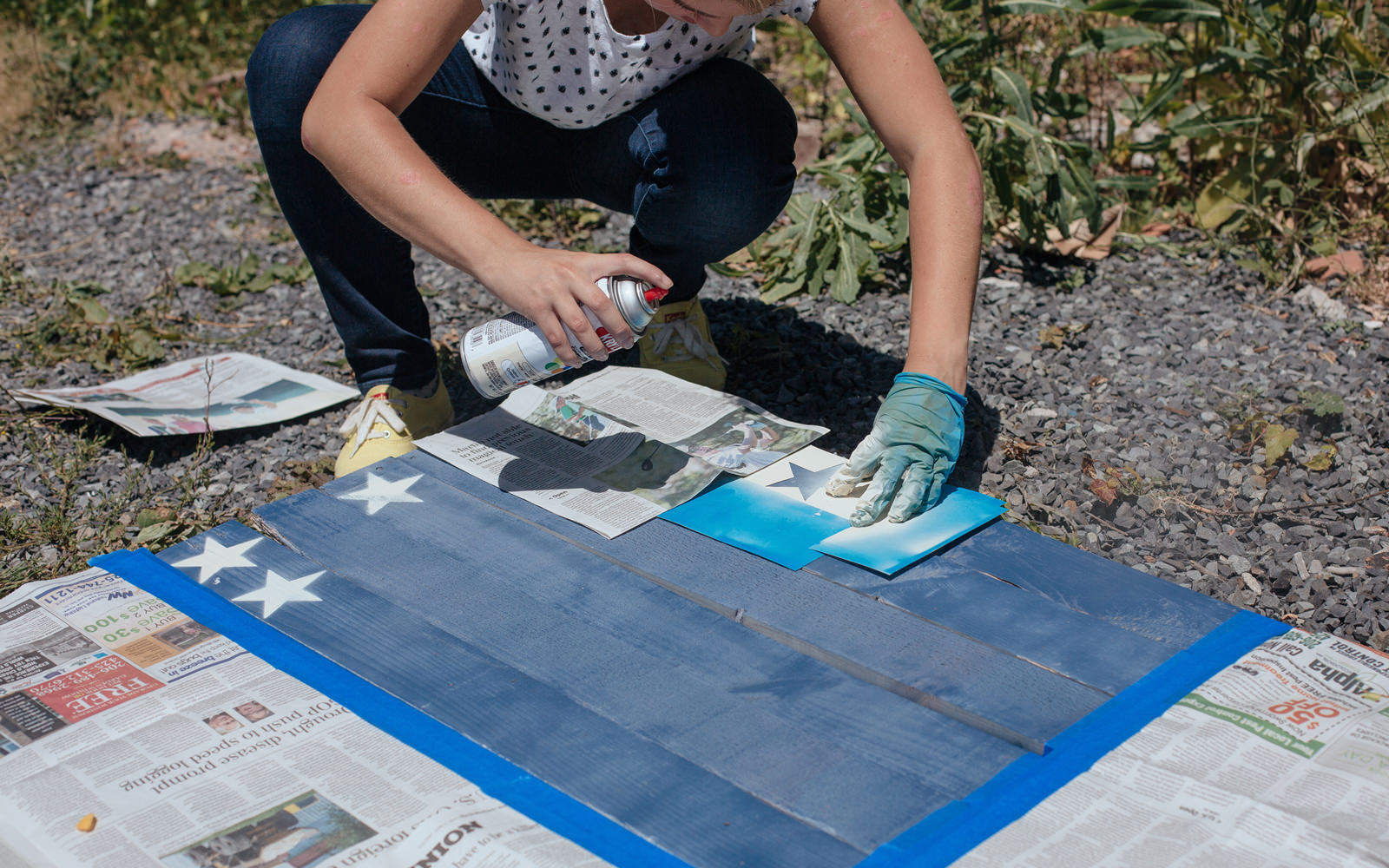 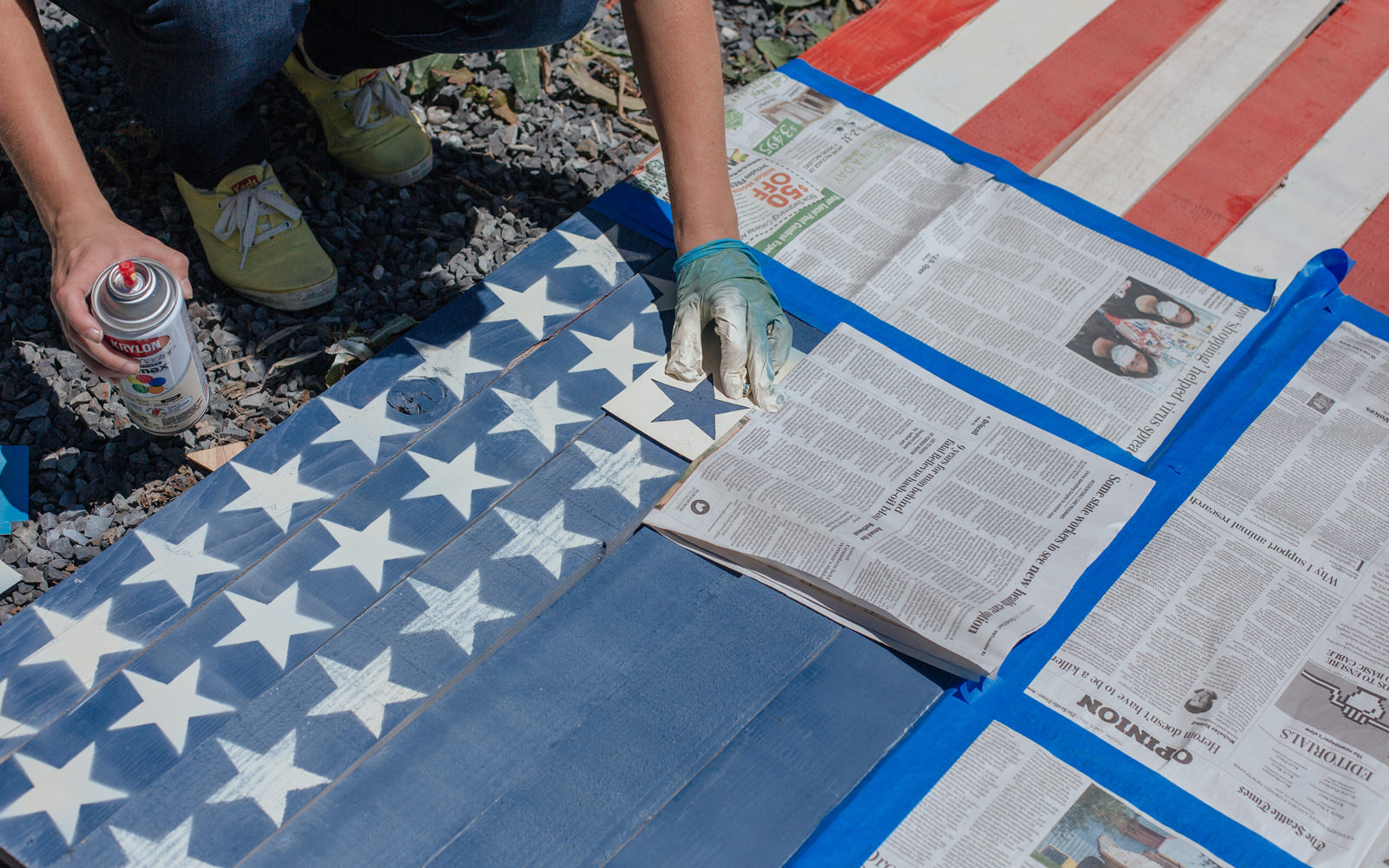 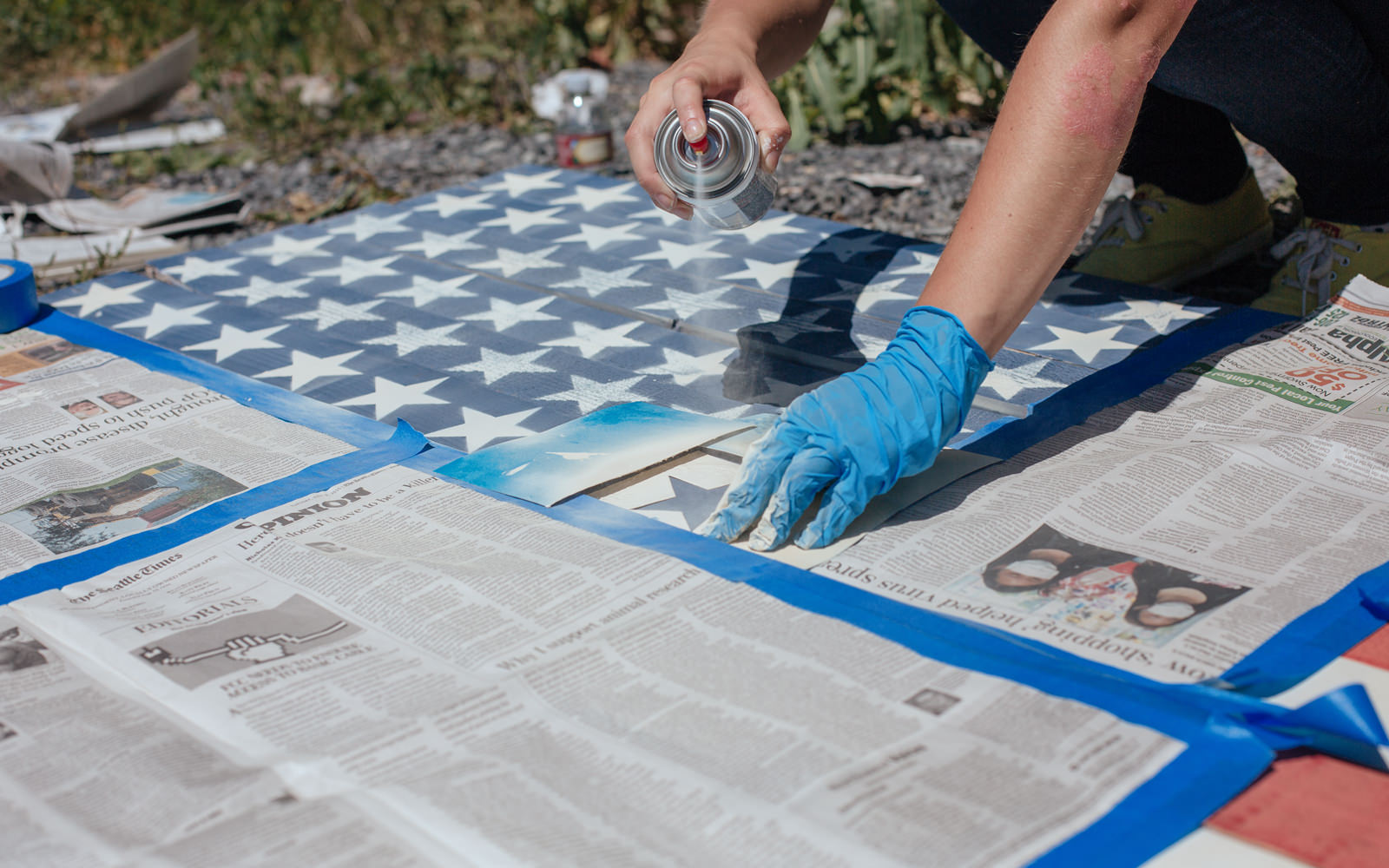 When you’ve painted the last star, wait for it to dry and you’re pretty much done! The last step is optional: Use a clear acrylic spray as a protective coating. 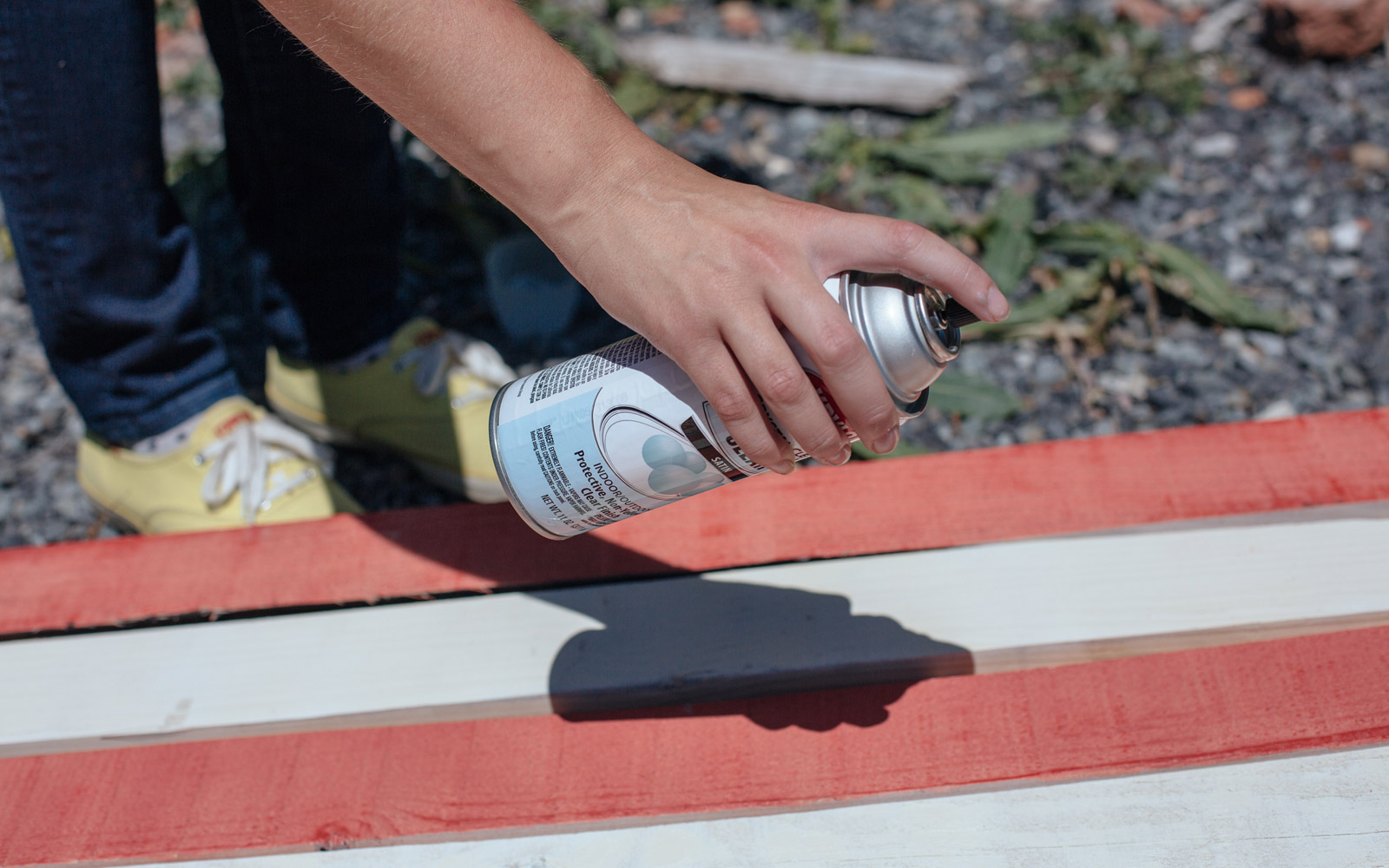 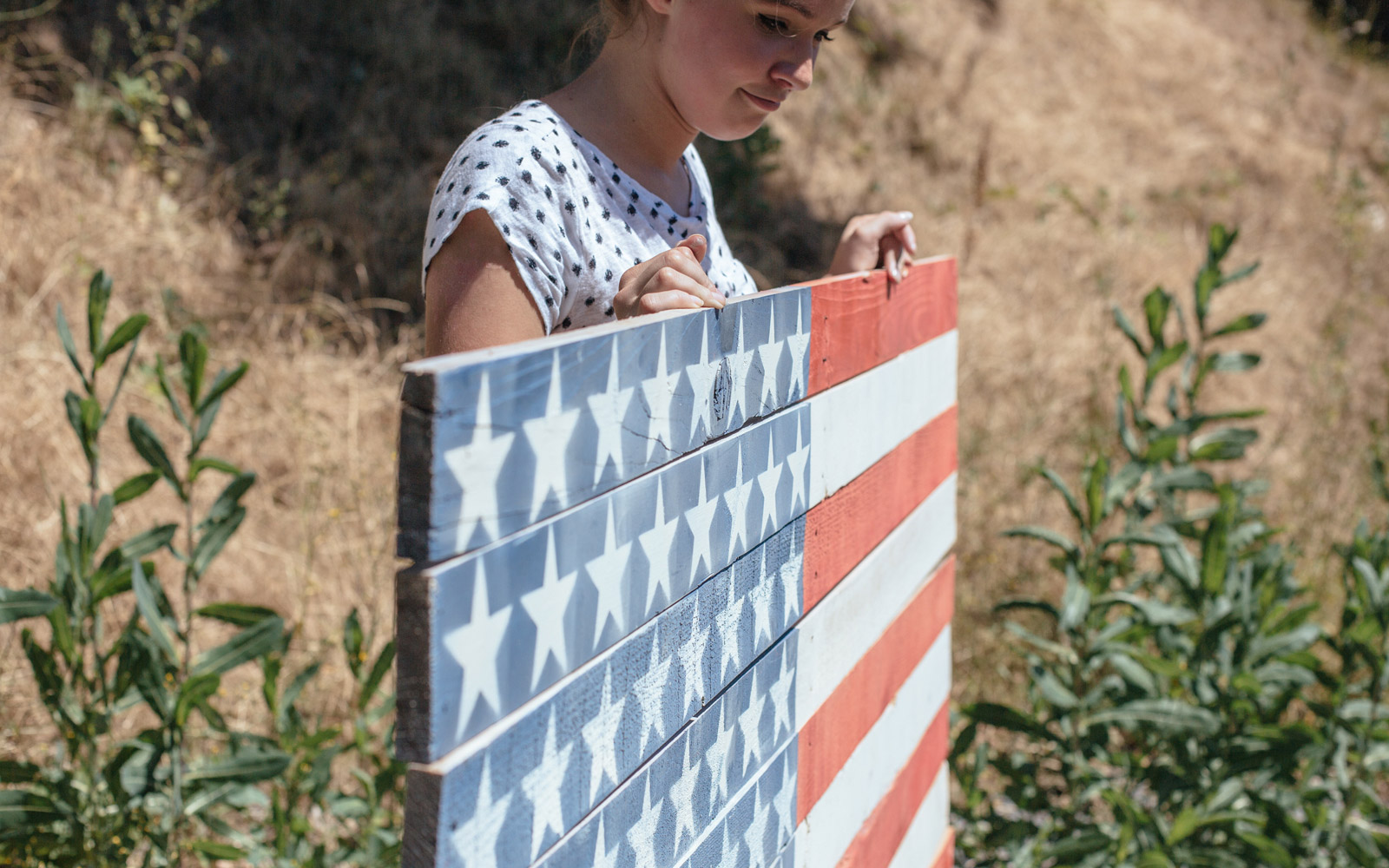 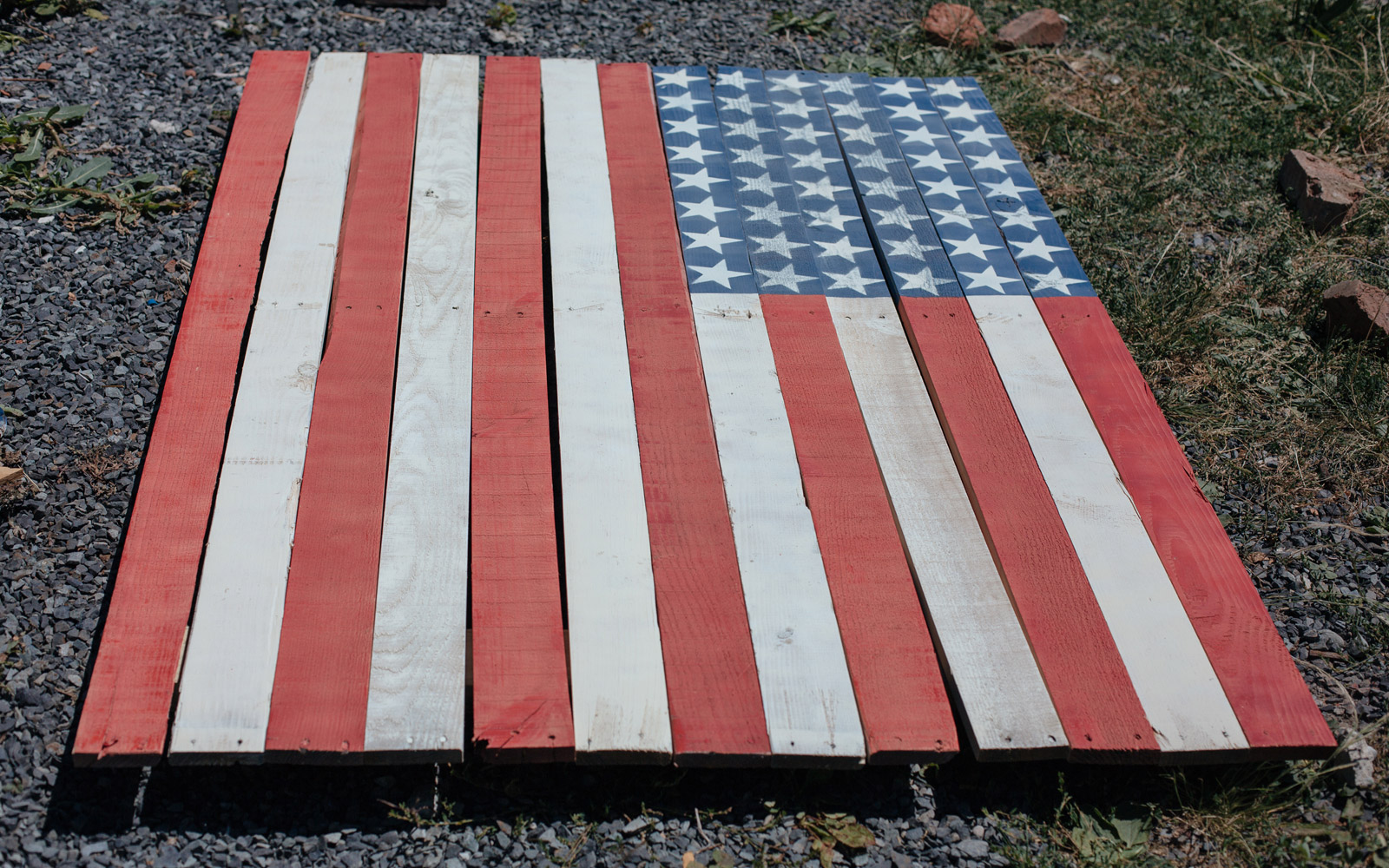 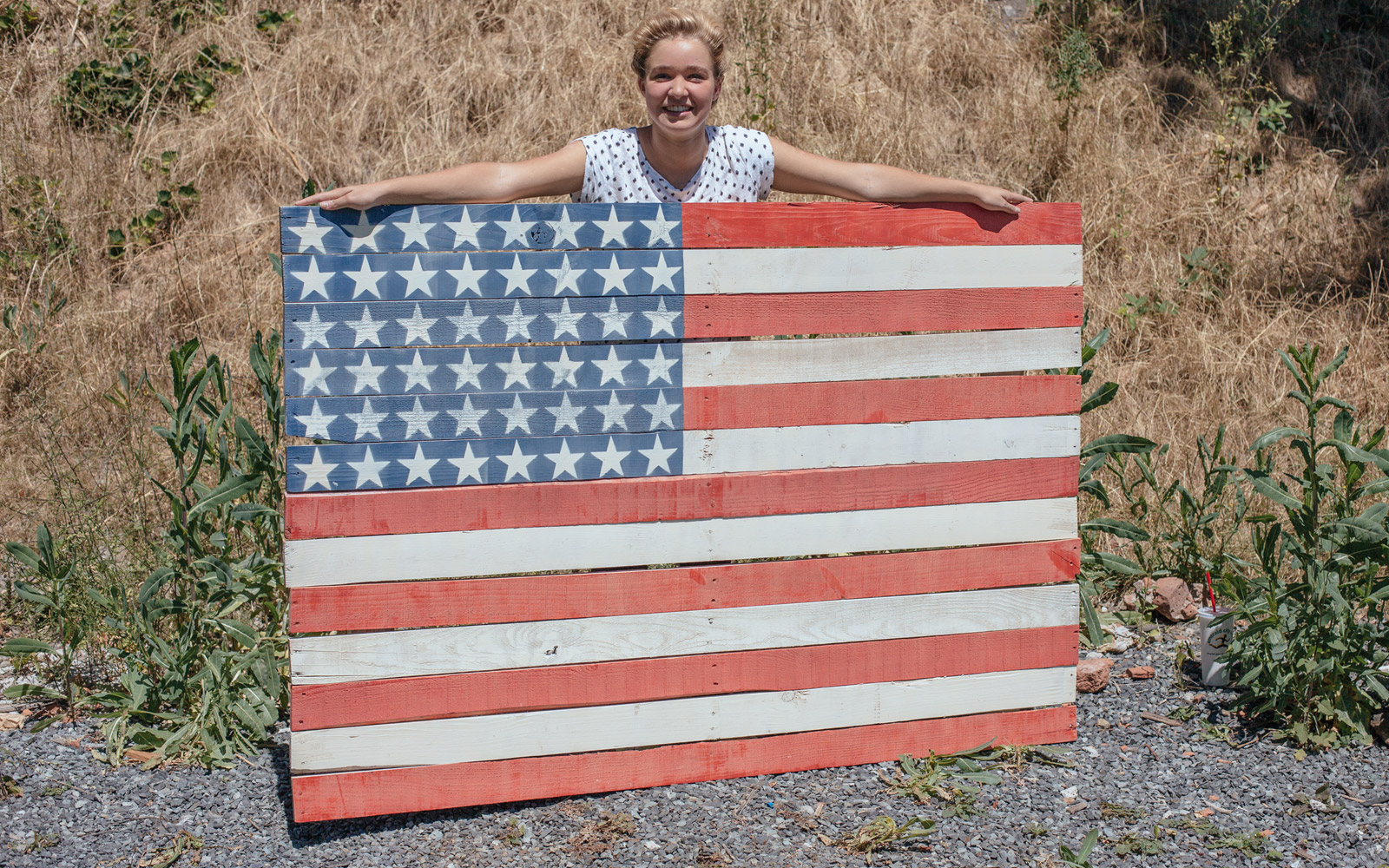 Congratulations on building your very own pallet flag! For more summer projects, check out how to build a backyard ring-toss game and how to make an outdoor lantern.

A new year is almost here! In honor of '16, Here's a list of our 16 favorite DIY project from the past year—enough do-it-yourself to start your 2016 with a totally made-over house.

How To Build an Adirondack Chair

To celebrate two years of Dunn DIY, we made our take on a classic—the Adirondack chair.