Spring is on its way and the days are getting warmer and longer, so our thoughts are headed outside. Today, Kirsten and I are building a beverage cart, but not just any cart—an all-terrain beverage cart that can roll across the lawn as easily as it can roll across a nice, even indoor surface. We tried something new with this project and scorched construction-grade lumber with a blow torch—giving the beverage cart a rustic, charred look. Let’s get started.

We used a propane weed burner to scorch the lumber. If you try this yourself, I recommend getting the feel of it using extra lumber before scorching the lumber you’ll actually use on the beverage cart.

Scorching the lumber is kind of like toasting bread. Some will want it dark, while others prefer it golden brown. The key is to keep the flame moving across the surface—the longer you spend on it, the darker it will be. It’s really fun to see some of the grain highlighted with the scorching. For a uniform look, scorch all four sides of your boards. And remember: Be safe, and have a fire extinguisher handy just in case things get out of control. 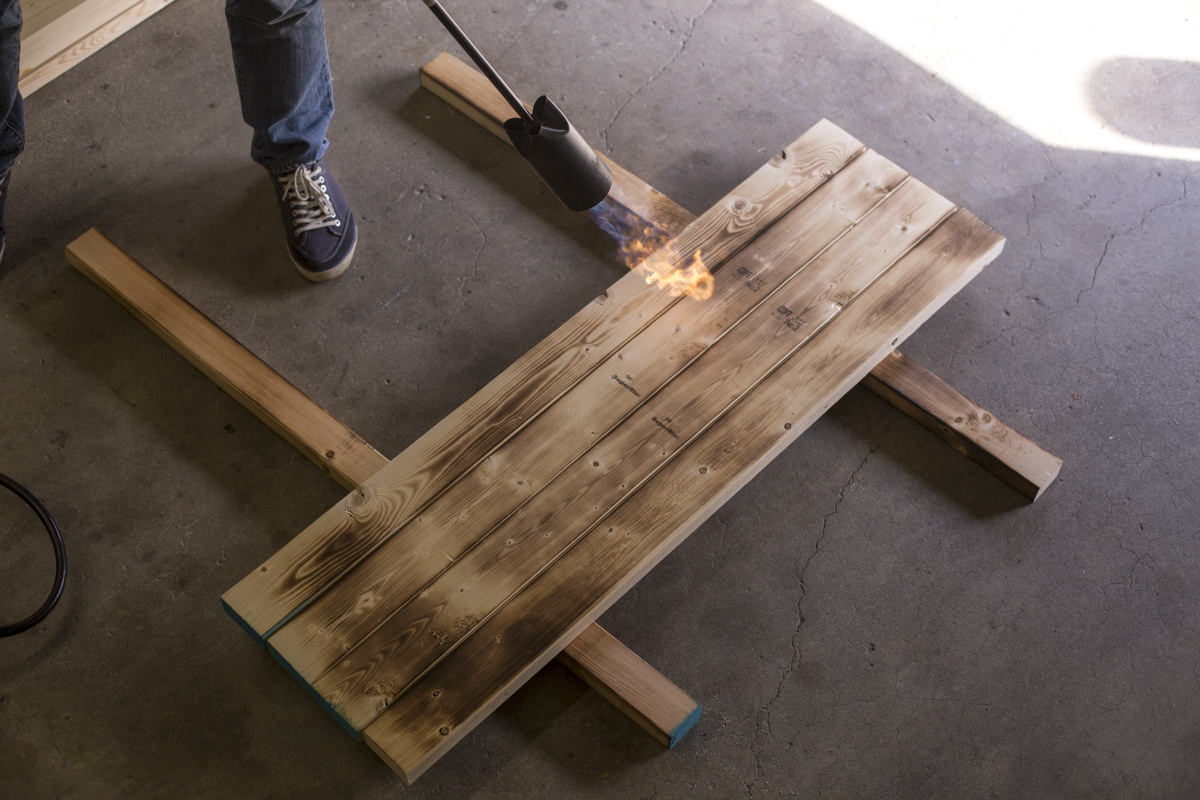 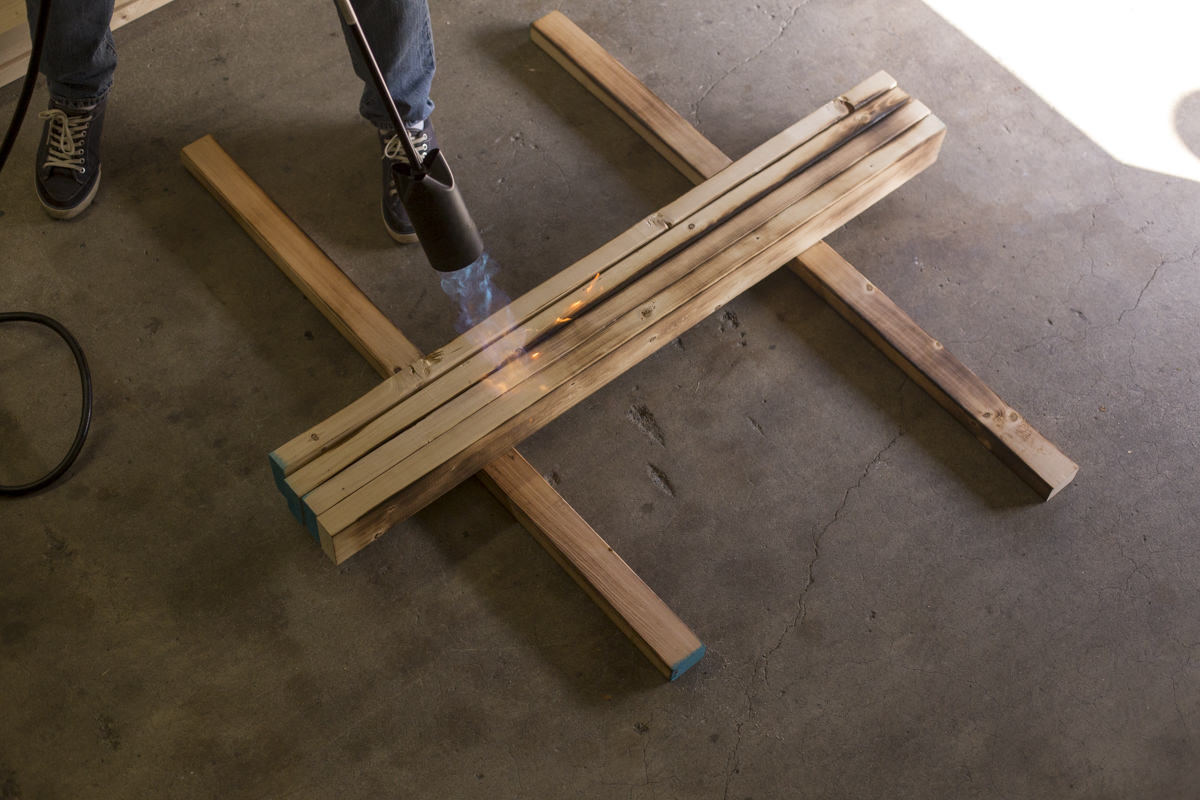 Step 2: Assemble the Base

Once your boards are scorched to your liking, start assembling your cart. Start at the bottom and work upward, cutting boards to length as needed. Don’t worry about a cut end not being scorched and looking different—we’ll cover that later.

You can make your cart any size you like but ours measures about 22” wide, 30” long, and 35” tall.  The measurements listed here are for a cart that size. 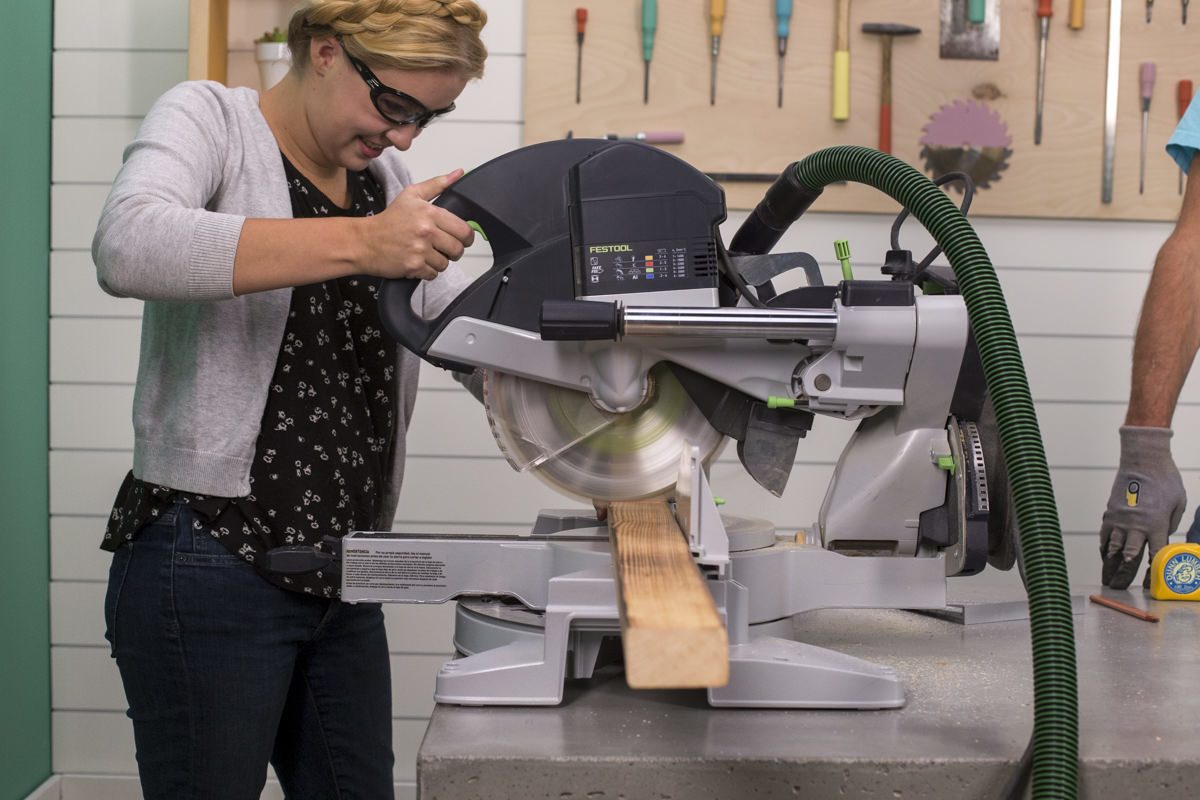 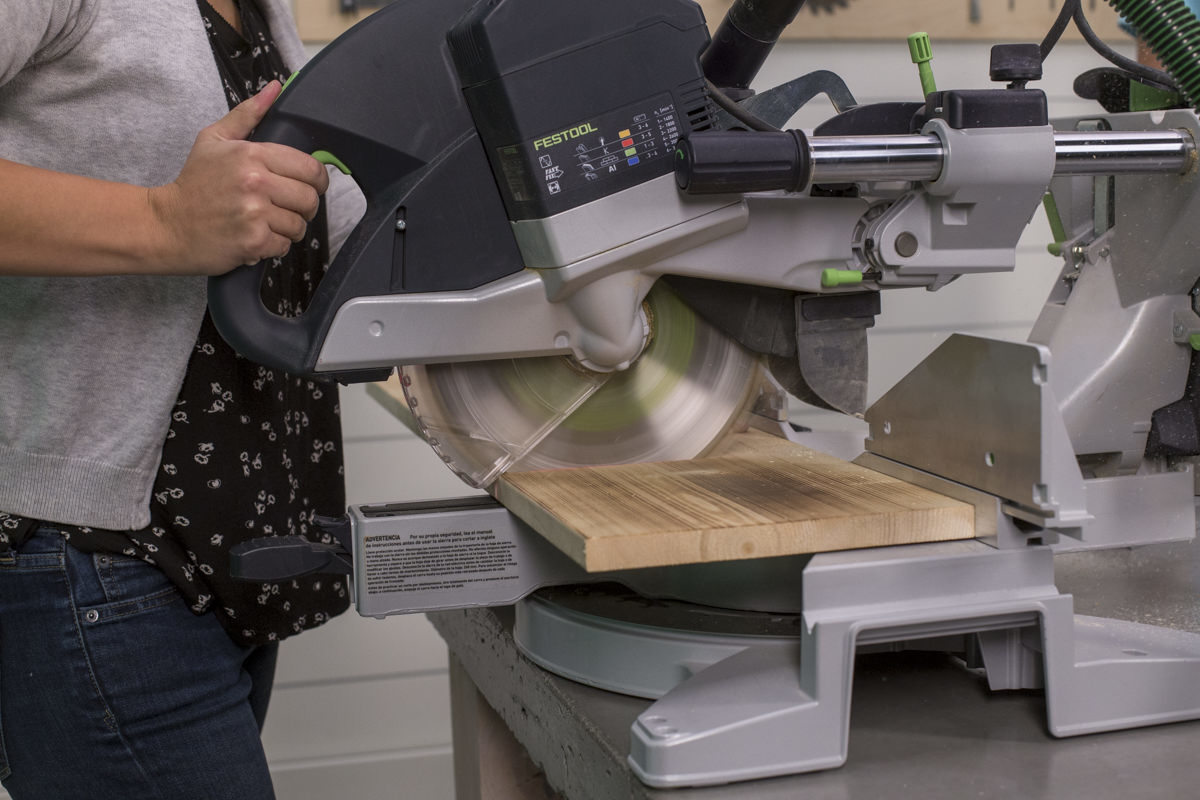 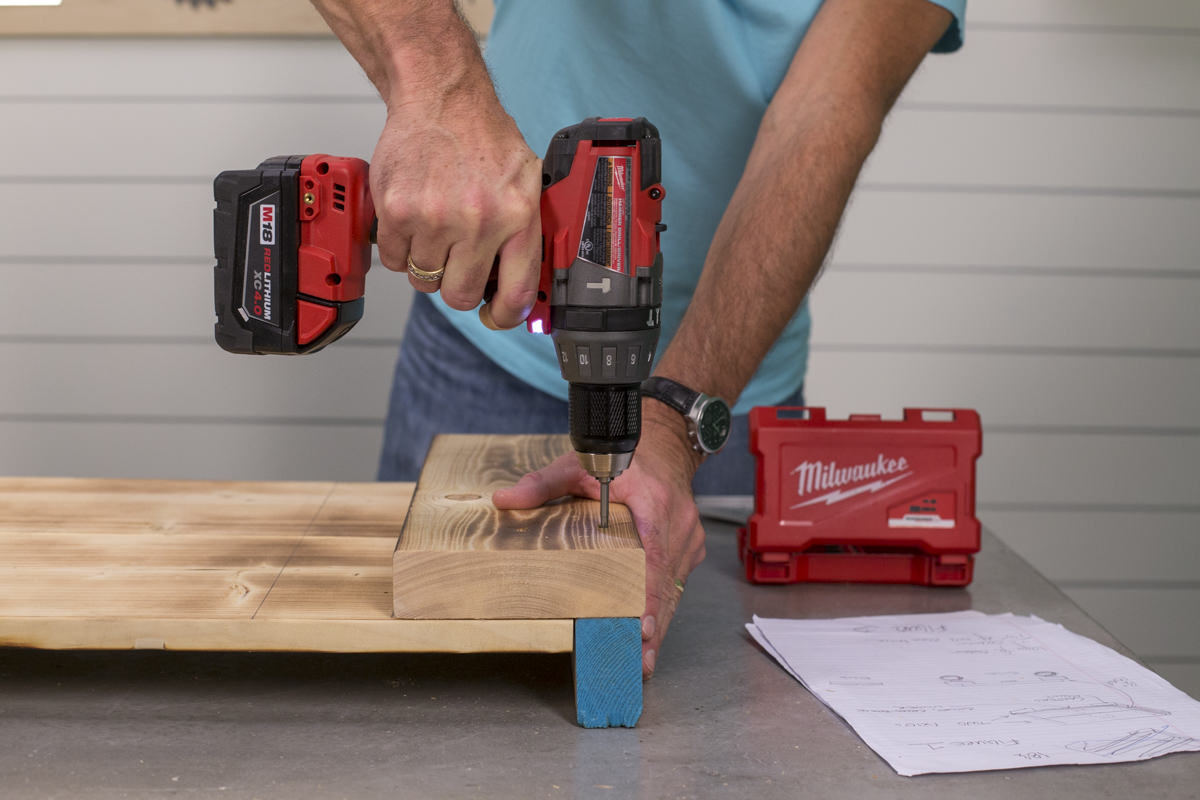 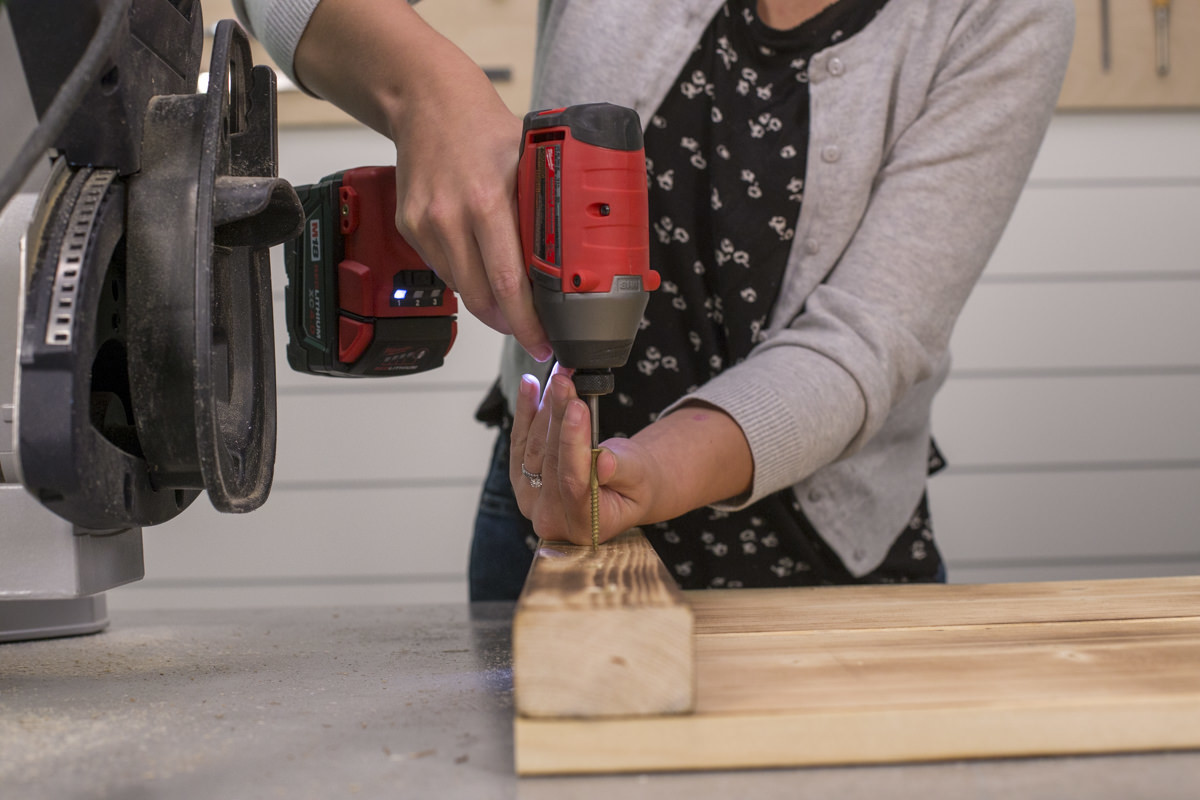 Step 3: Attach the Front & Back Legs

Cut two two-by-four boards to 25 1/2", two to 31”, and two to 18 1/2". The legs are different heights because our cart is taller on one end—like a bed’s headboard is taller than its footboard. Attach the bottoms of the legs to the four corners of the base, using the diagram as a guide. We drove 4” TimberLOK screws through the legs into the two-by-six cross braces. Other screws will work fine, but these drive in easily with an impact driver (or high-torque drill) and give a strong and secure joint. Once that’s finished, attach the two-by-fours between the two legs on each side. We drove 2 7/8” HeadLOK screws through the ends into the two-by-six behind. 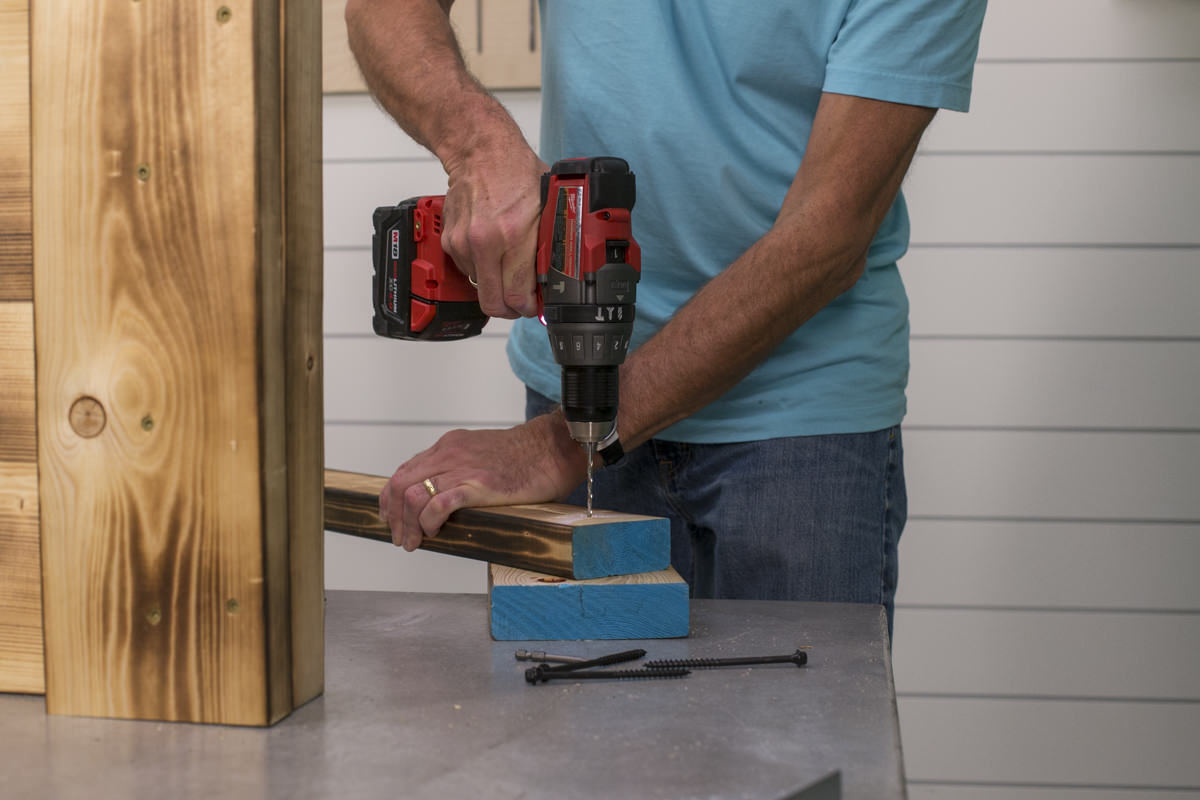 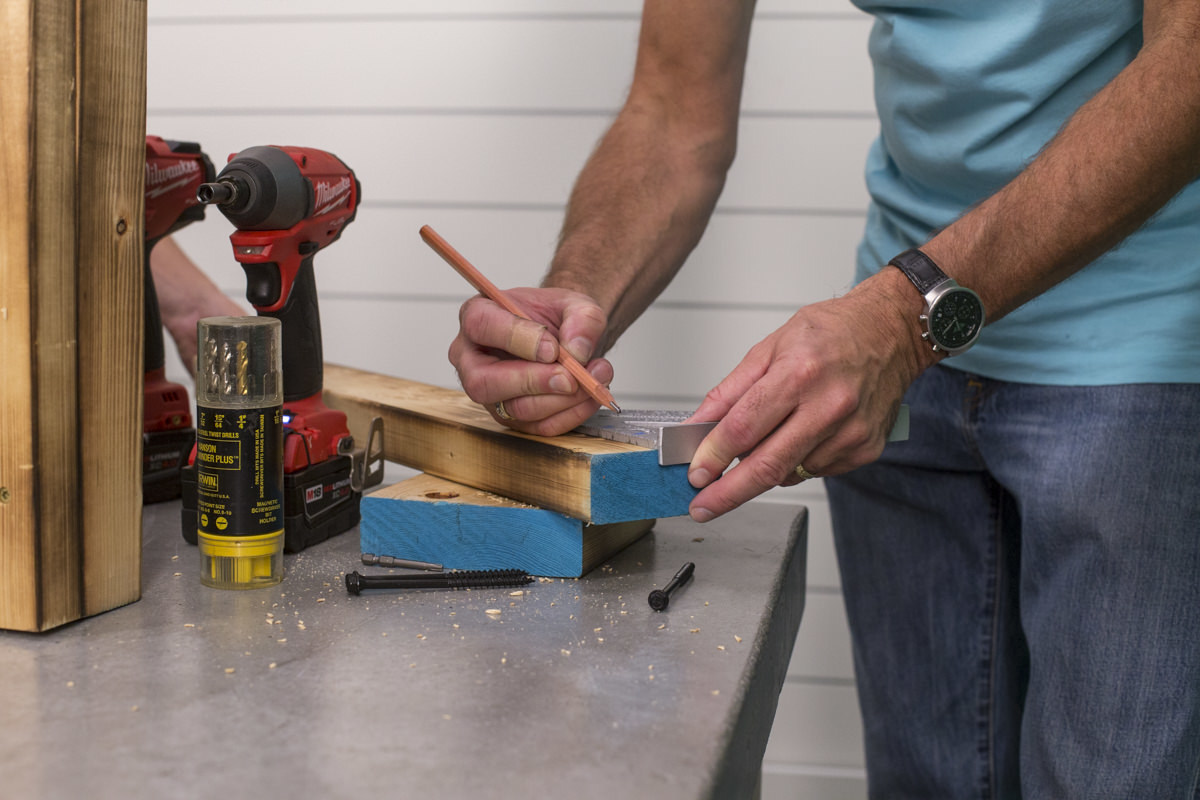 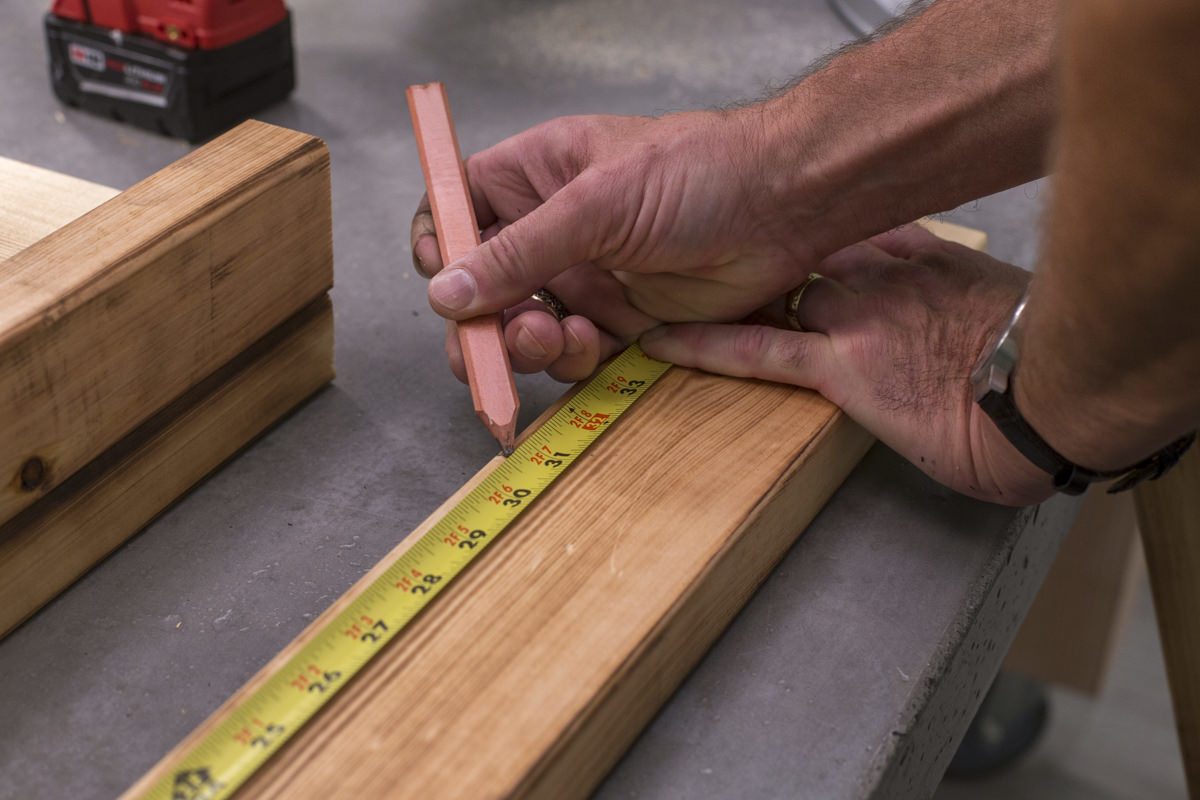 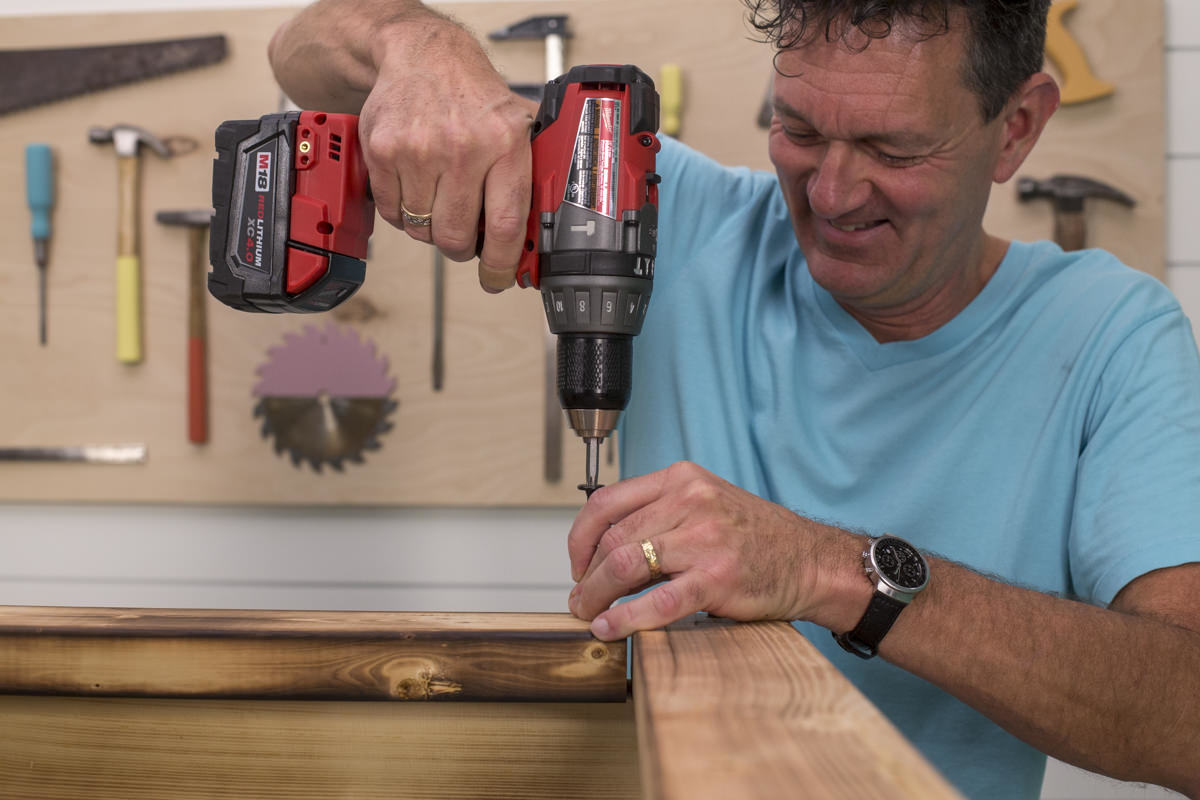 Next, screw the two vertical ends into place. We used HeadLOK screws again, screwing through the face of the vertical boards into the cross brace under the shelf. 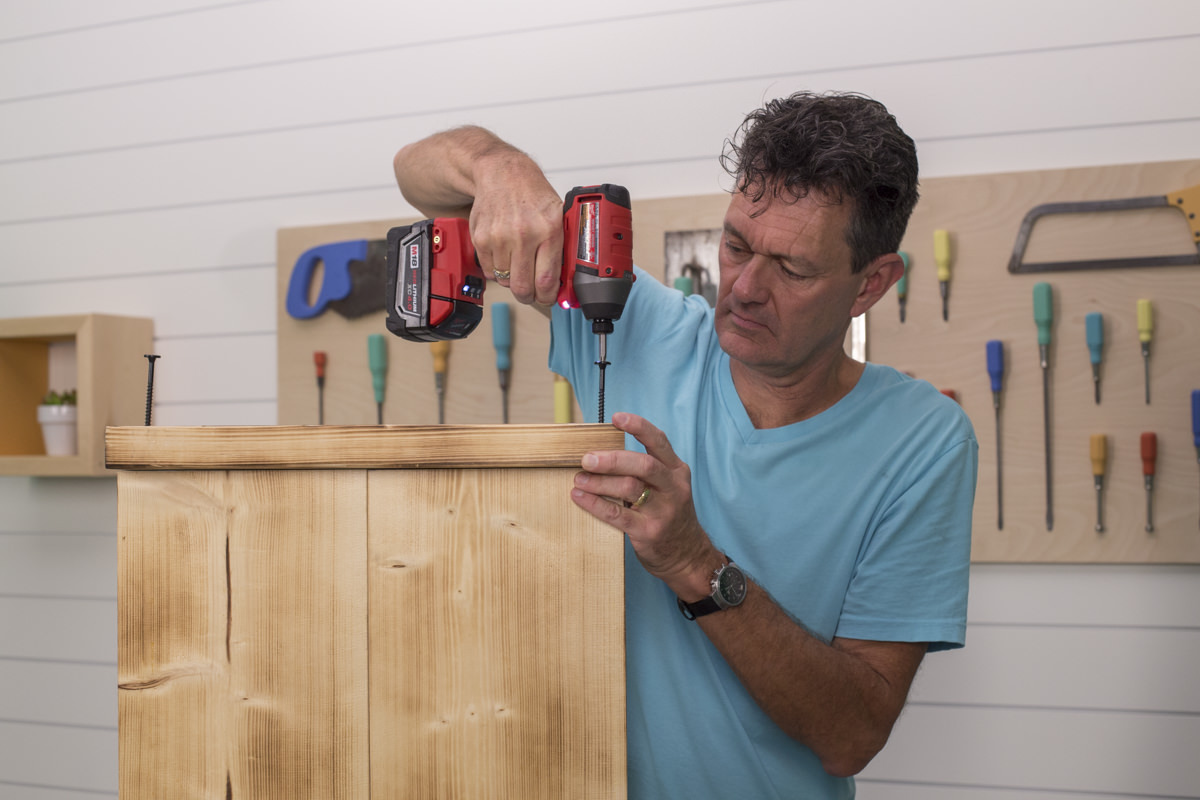 Position the upper shelf unit so that the tops of the legs line up with the top of the top shelf, then screw into place. As with the lower shelf, drive 4” TimberLOK screws through the legs into the ends of the top shelf. 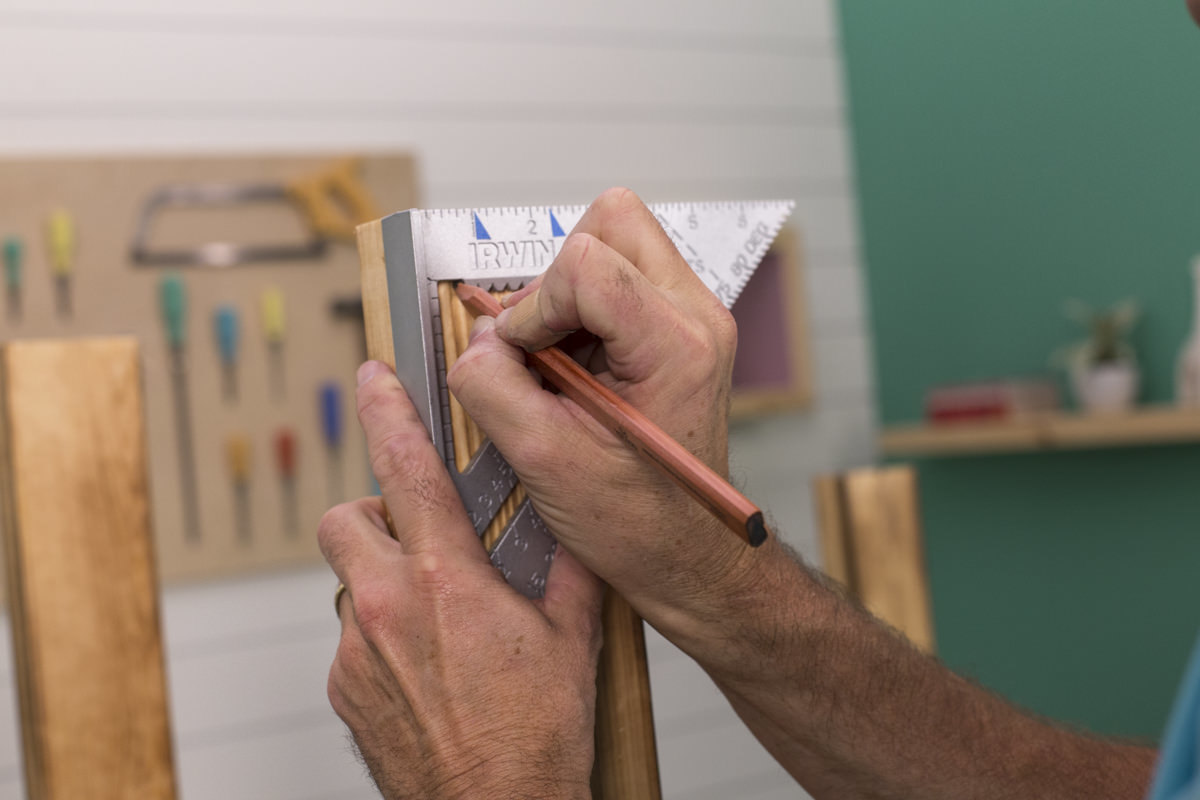 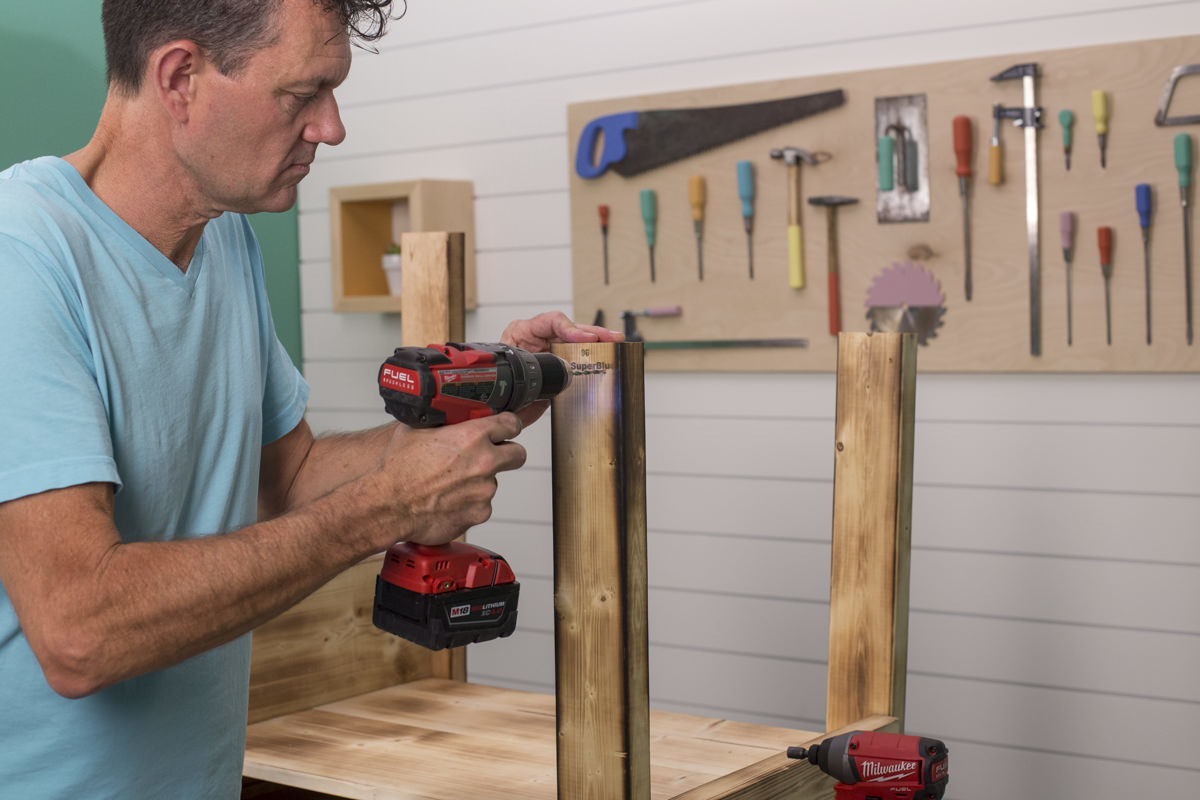 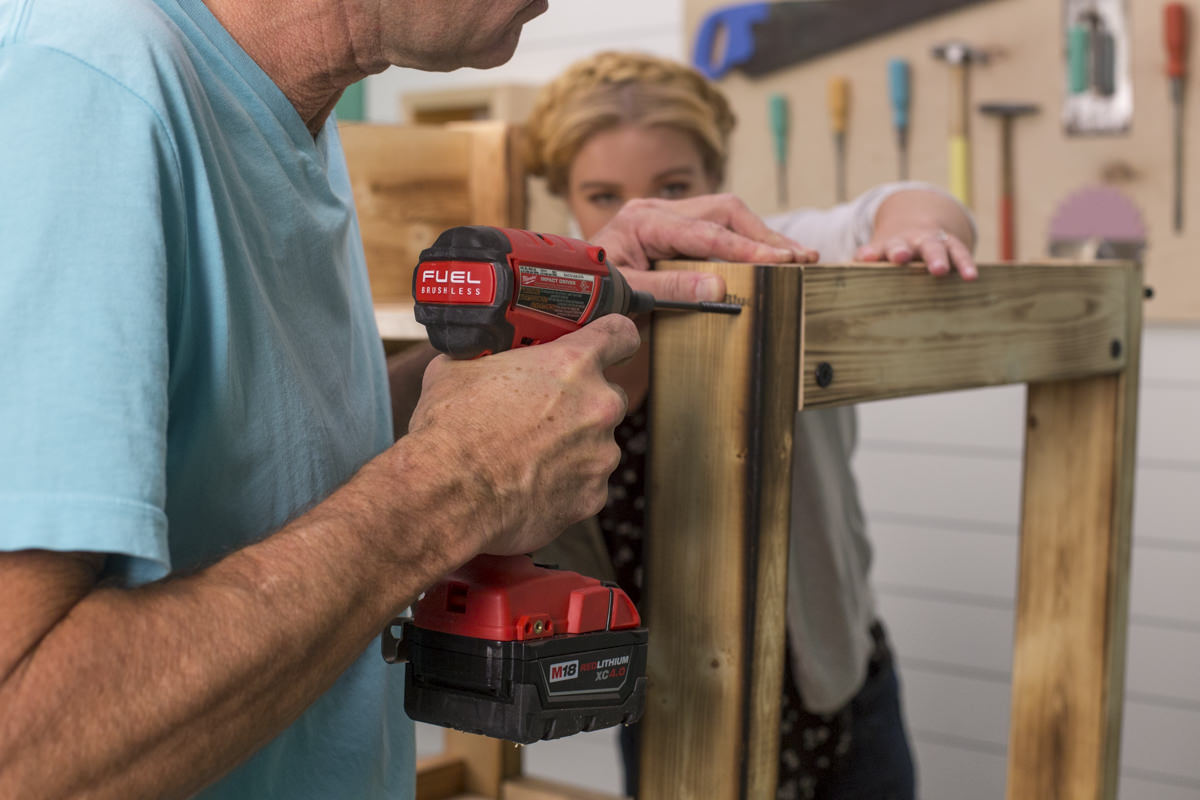 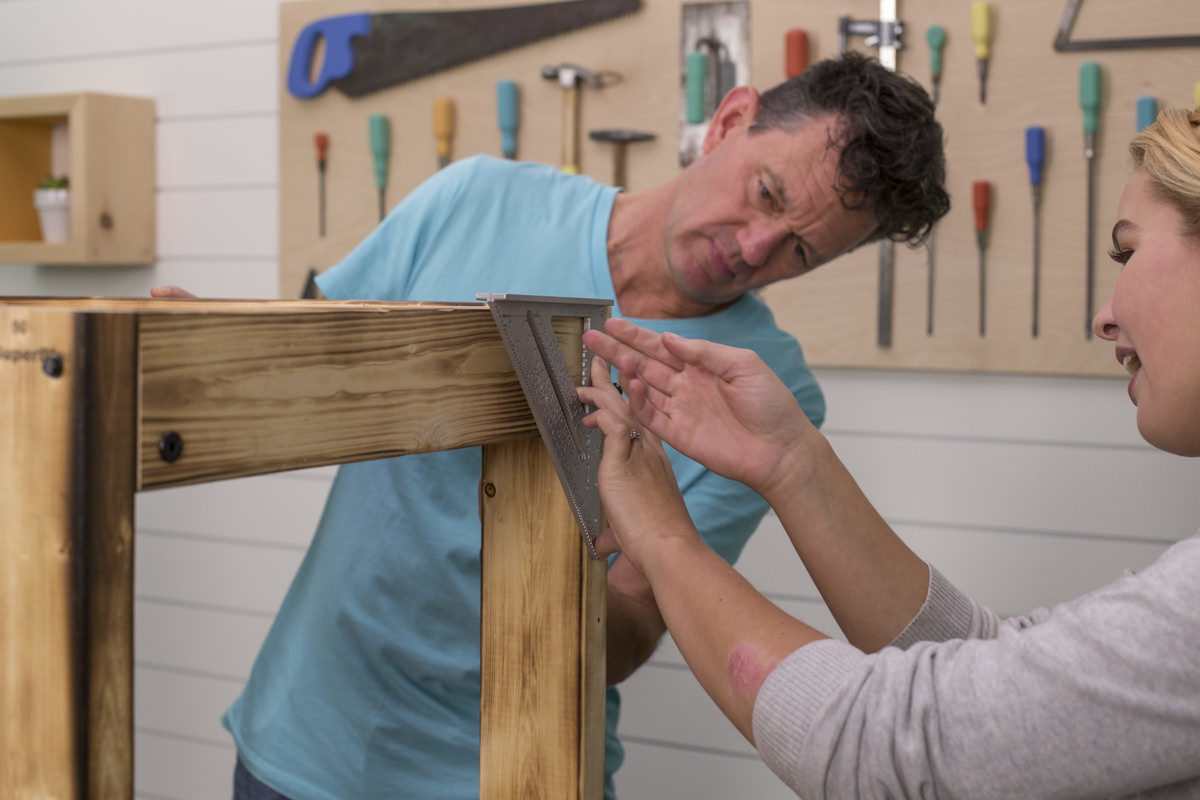 Cut two two-by-fours to 23” and mount them horizontally between the legs, even with the top of the shorter end (see diagram). For this step, we drove 6” TimberLOK screws through the edge of the legs into the sides. 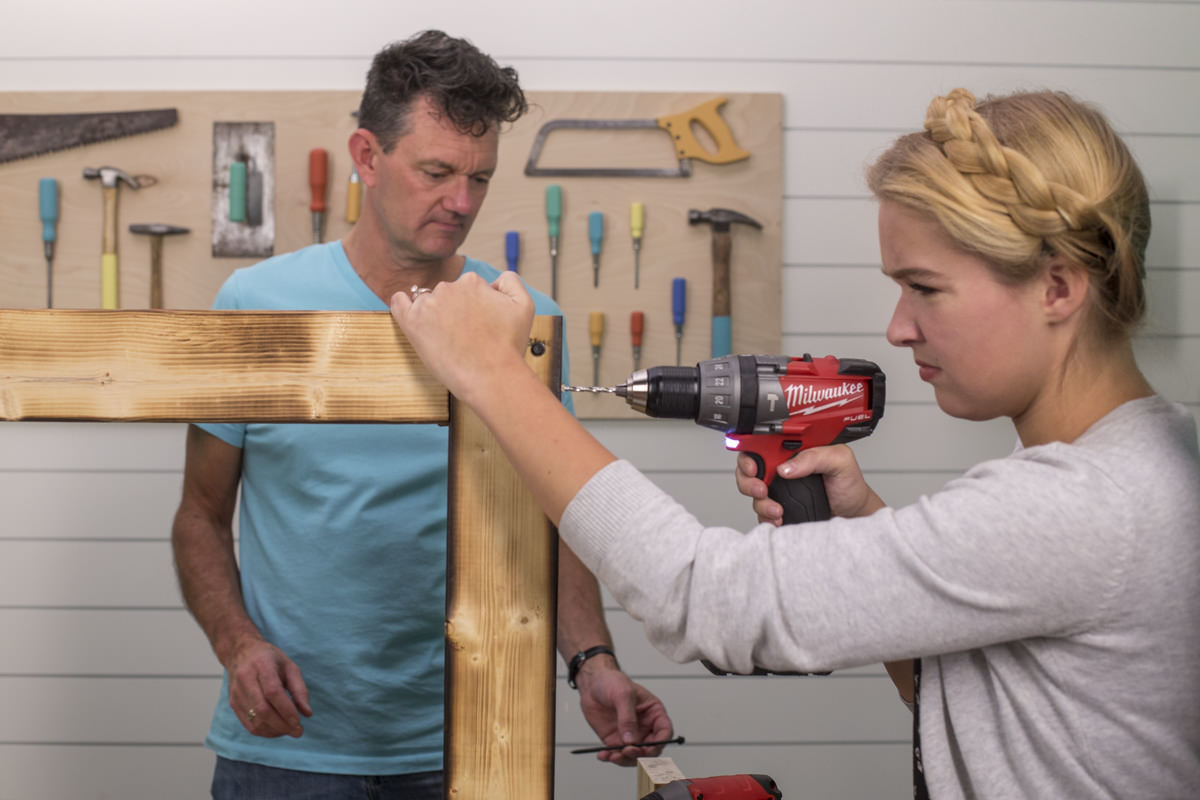 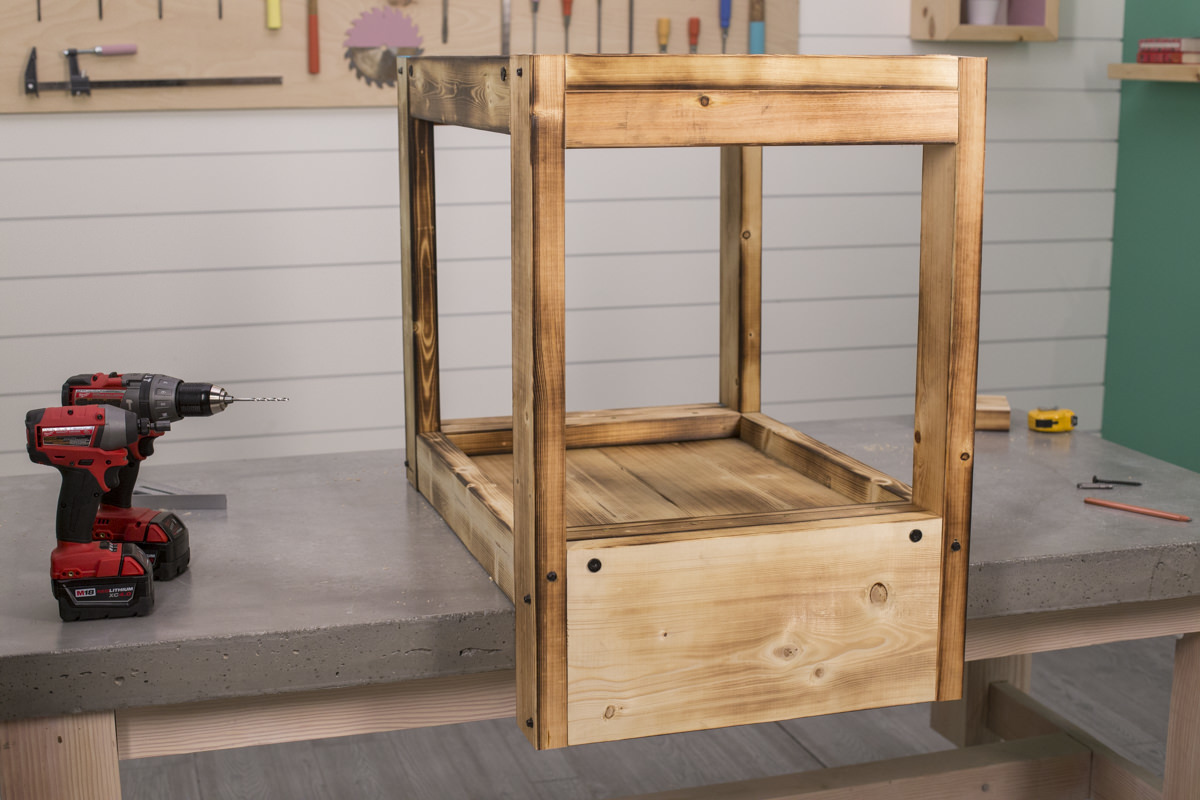 Because we wanted our cart to be all-terrain (we have to be backyard BBQ-ready) we chose large 10” casters with pneumatic tires. You can find them at a local hardware store or online at Harbor Freight Tools. We used two fixed casters and two that swivel—mounting the swivel casters underneath the short legs of the cart, and the fixed casters under the taller legs. Later on (in Step 9) we’ll be mounting a push bar to the shorter end of the cart. Mounting the swivel casters on the same end as the push bar will make the cart easy to maneuver.

With the cart upside down, mark the mounting spots for the casters on the two-by-six cross braces, pre-drill the holes, then secure with lag screws and washers. 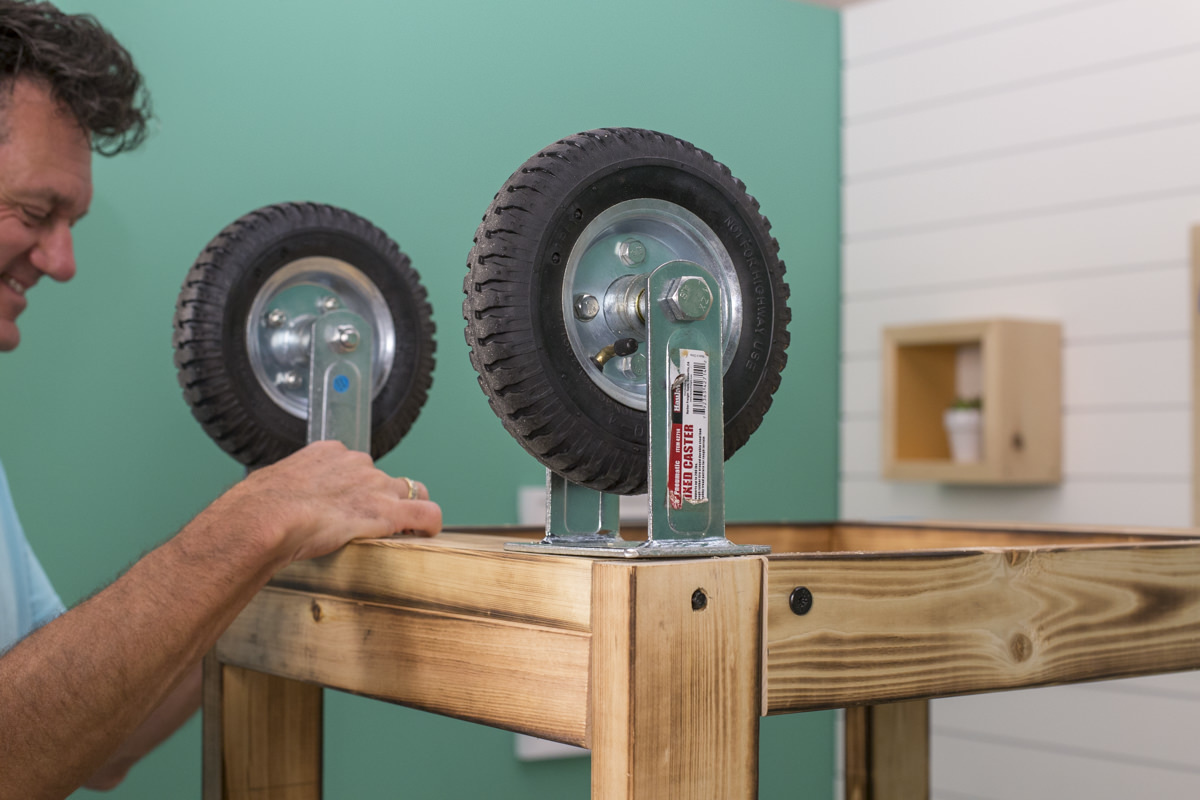 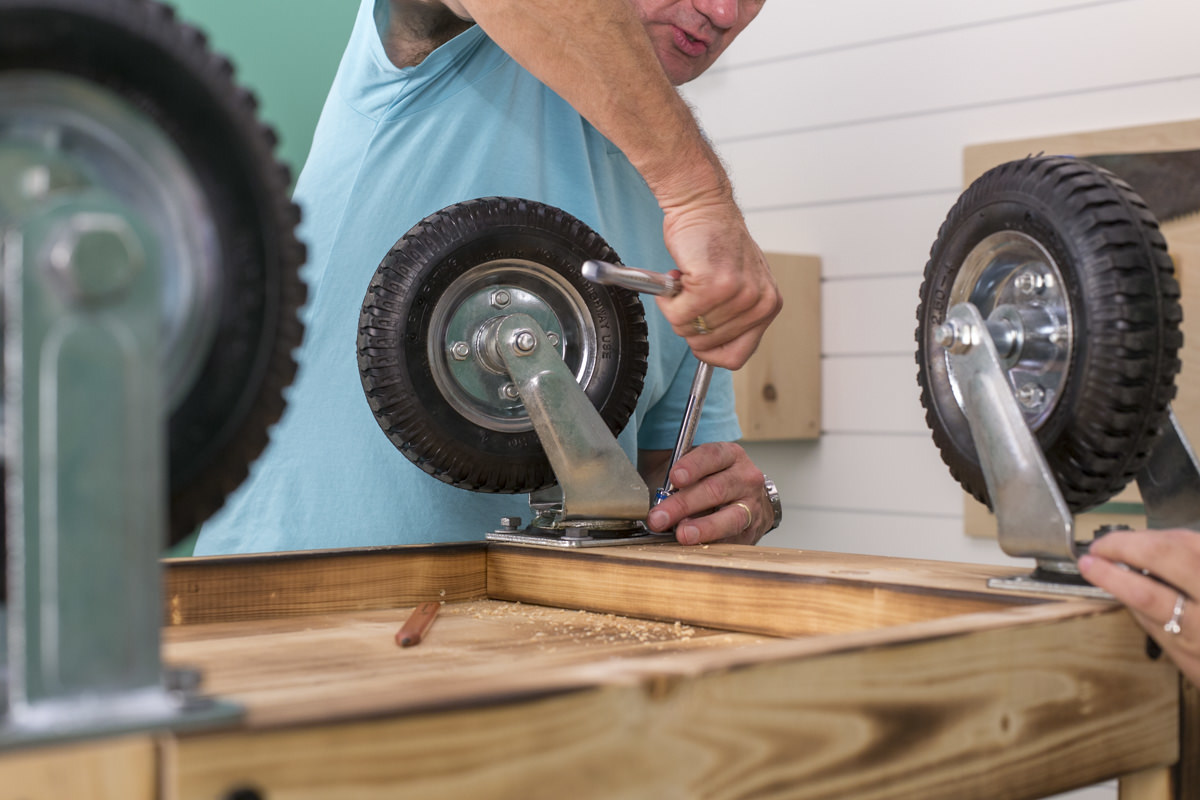 Using a propane torch again, char any cut ends of lumber to match the rest of the cart. (You can do this before or after Step 9, depending on how you're accessorizing.) 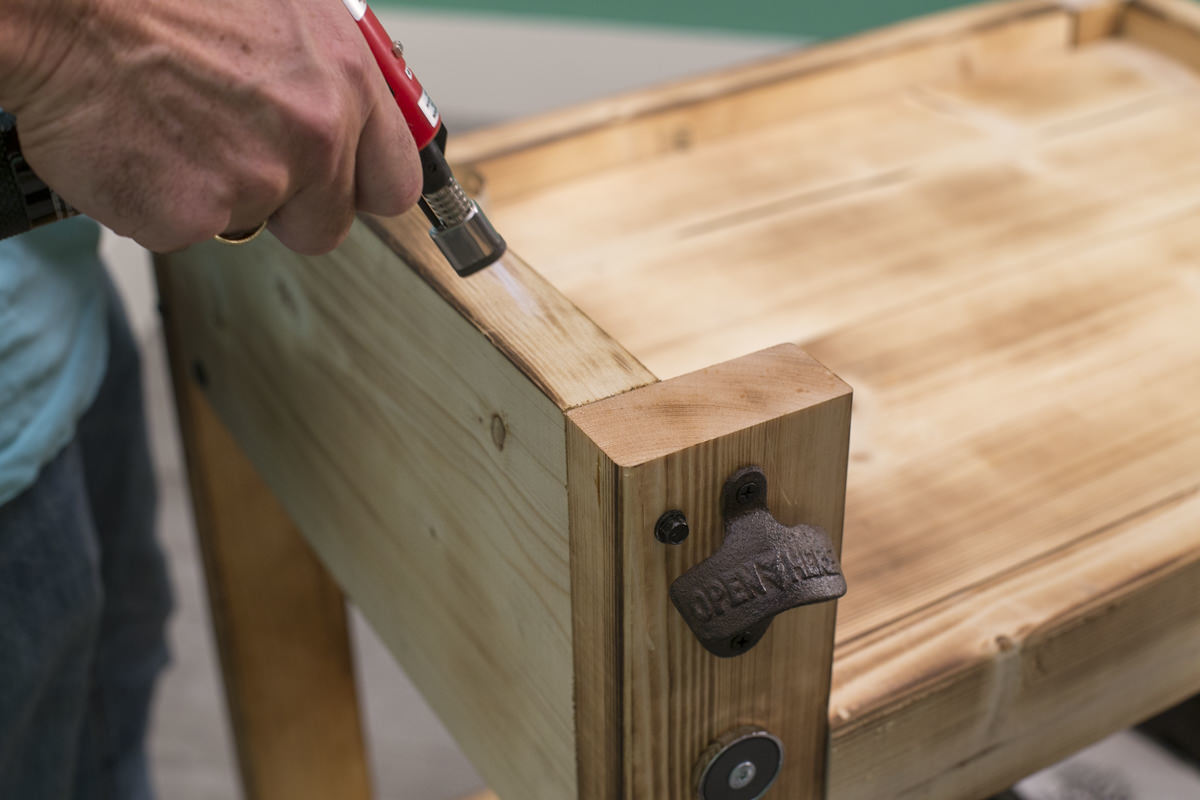 We dressed up our beverage cart by mounting a bottle opener to one upright (and a magnet below it to catch caps), a hook for a towel (golf towels work great here), a solar-powered accent light, and straps to hold glasses or bottles in place. We also added a push bar made from a 12" length of 1/2" galvanized pipe and fittings. You probably have some other great ideas on ways to accessorize and make it yours—we’d love to see them! 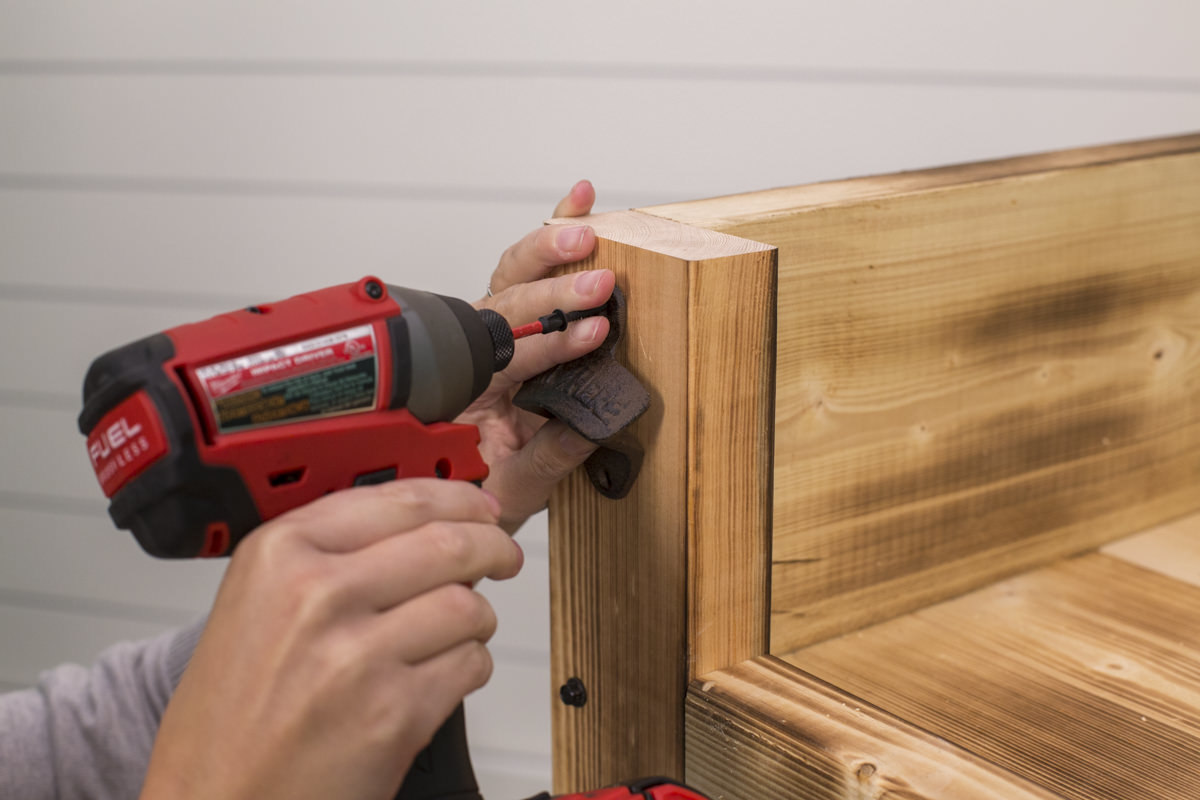 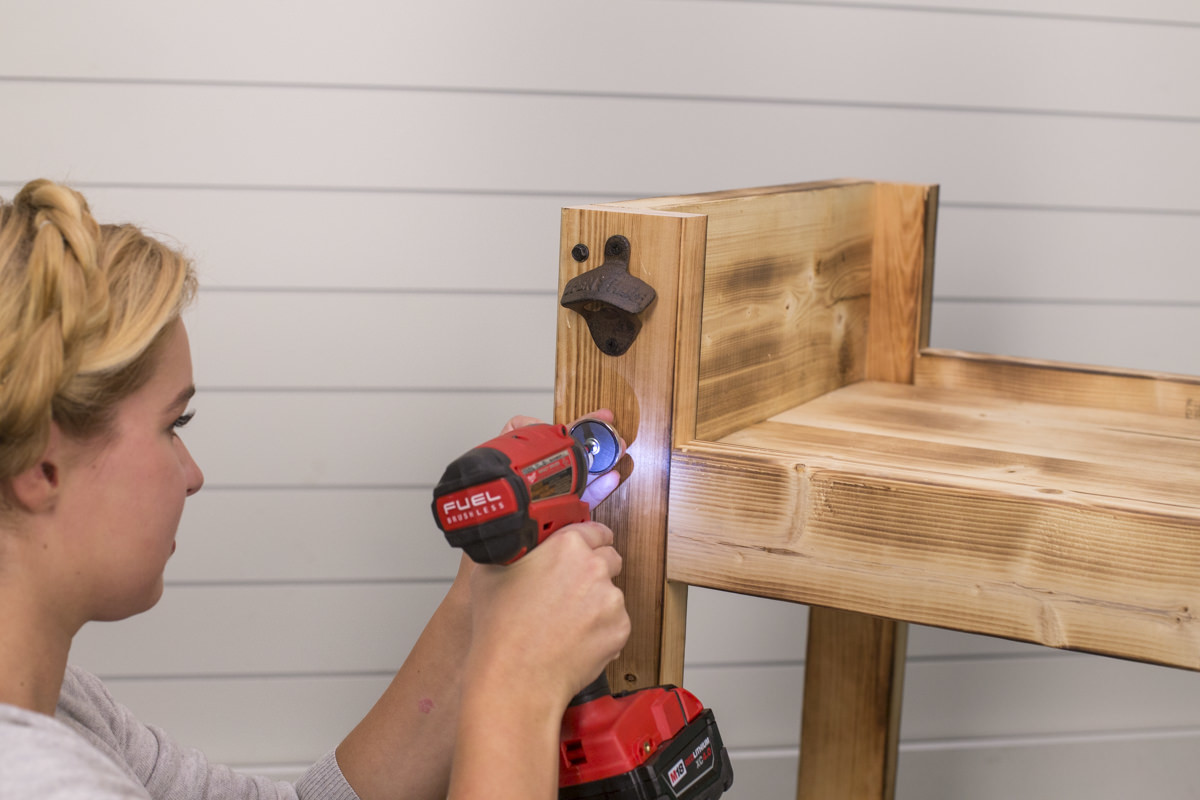 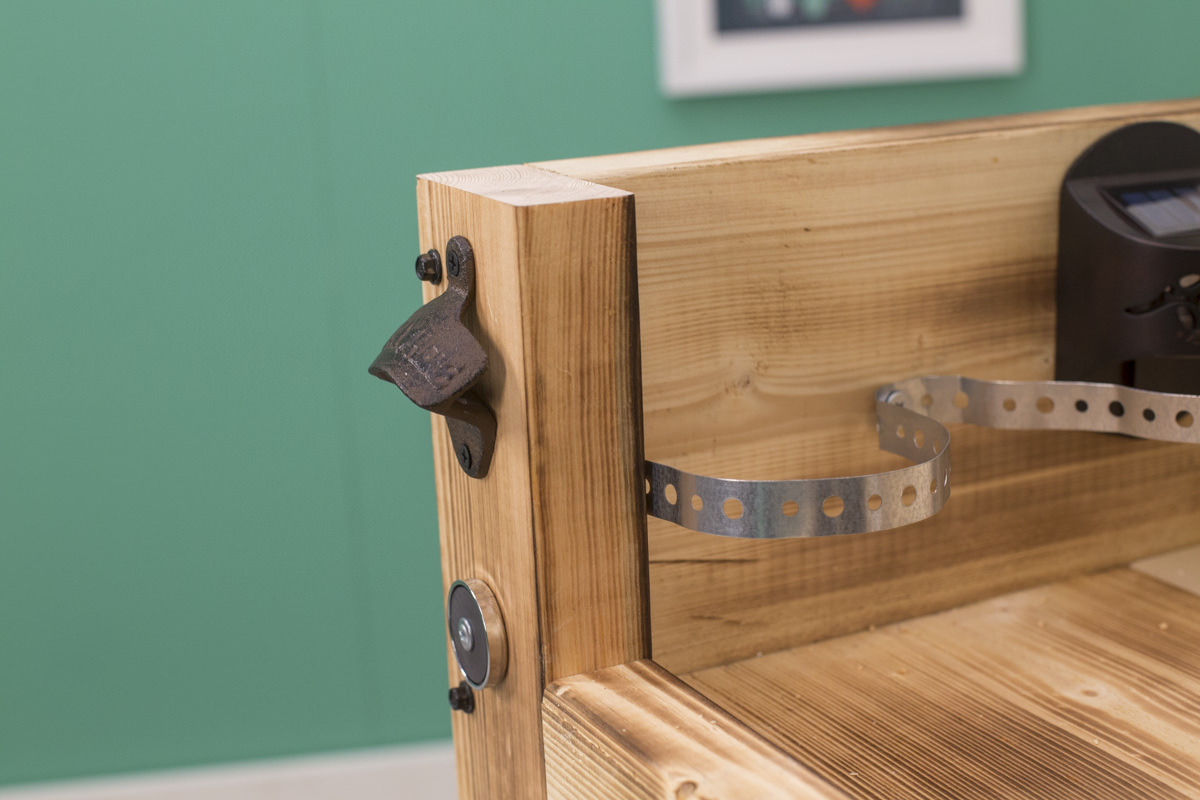 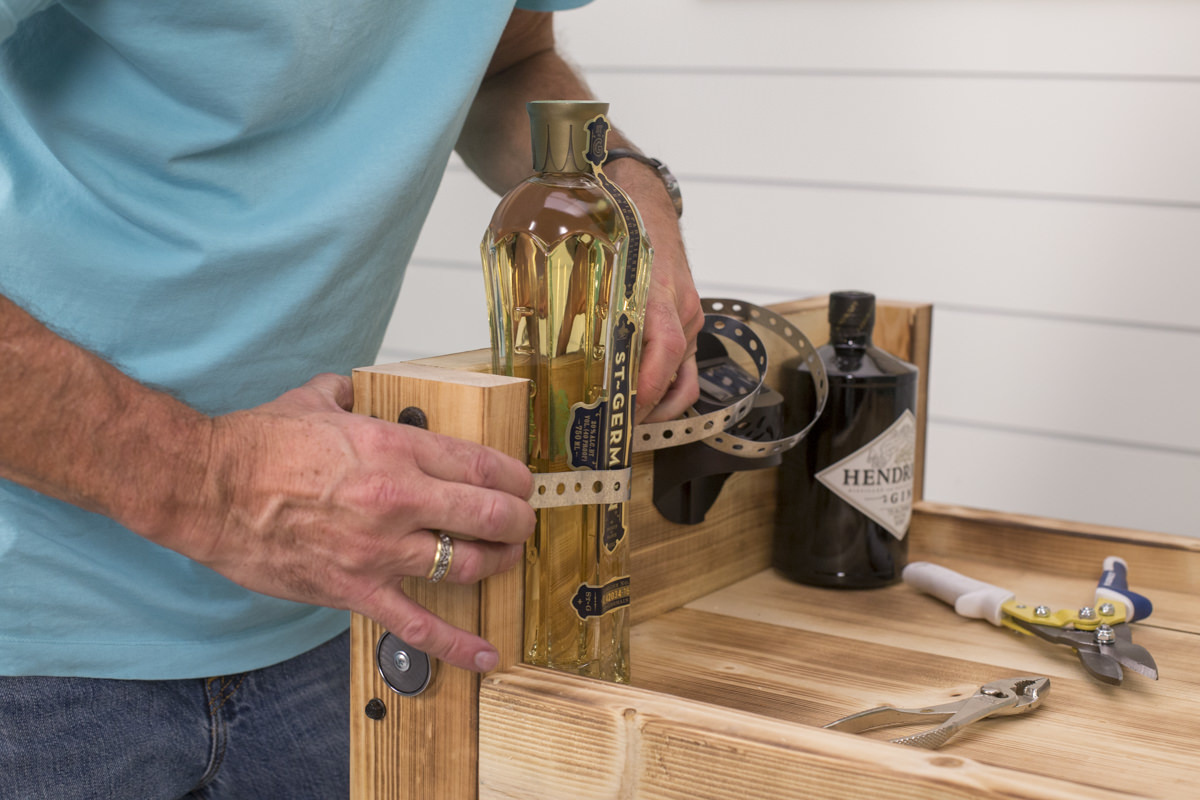 We had fun building this cart (and a lot of fun charring the wood). The shelves are big enough to hold a tub full of iced drinks, and the cart will roll easily on decks, patios, lawns, paths, and more. Enjoy! 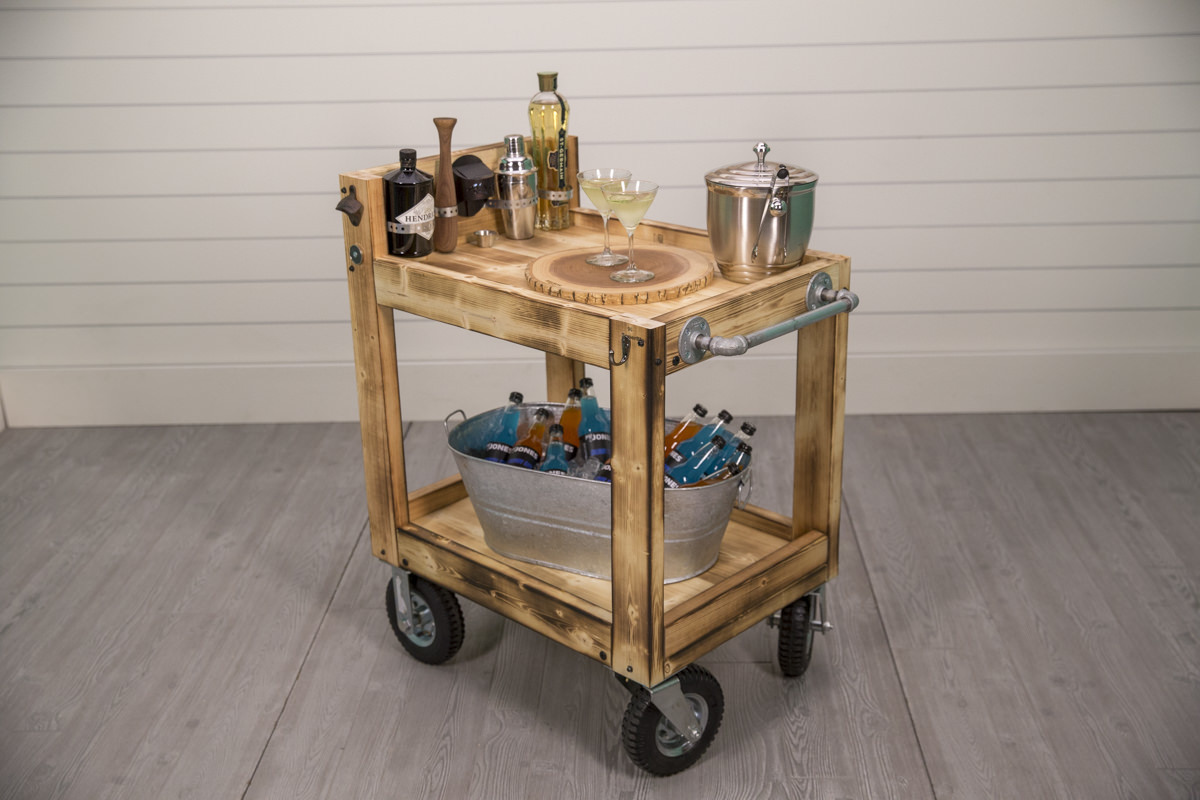 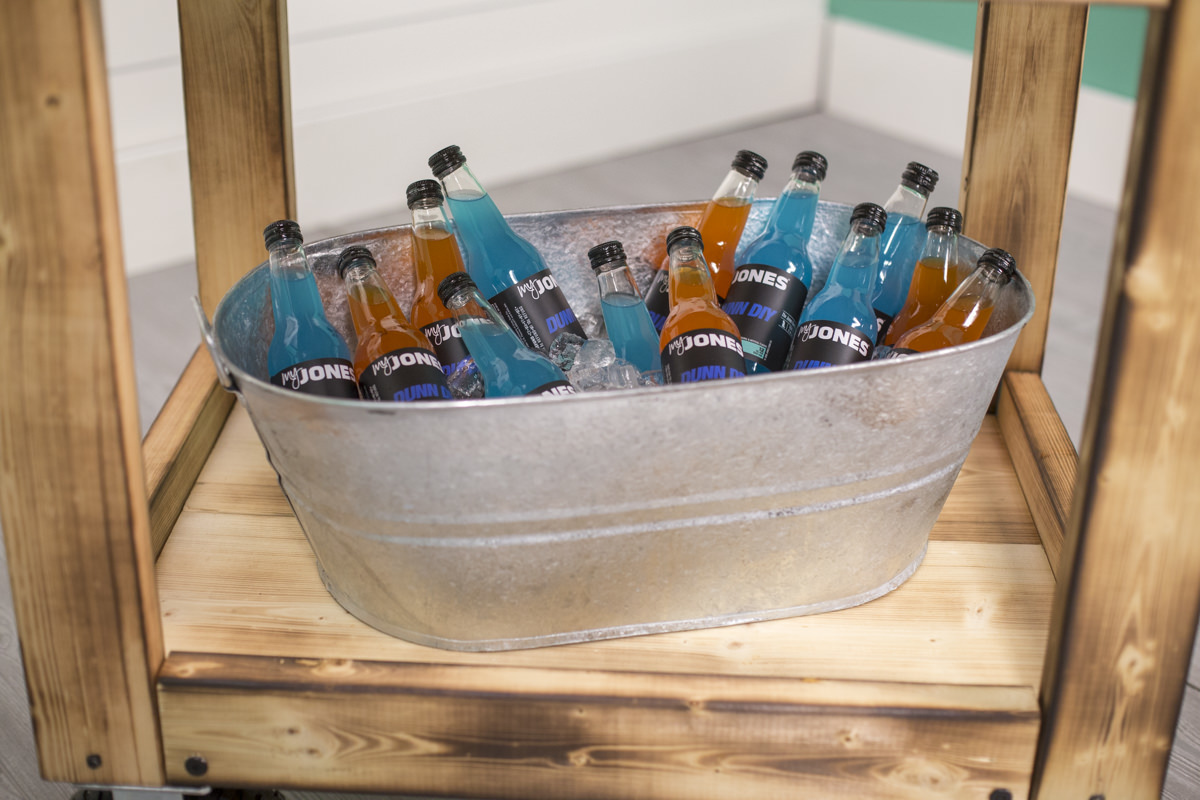 These wood trivets are equal parts beauty and function, and they are a lovely addition to any tablescape.

How to Sew a Bench Cushion

This is a fun way to refresh a tired bench!

Board and Batten Wall DIY

A board and batten wall is a classic architectural feature from the Craftsman style, a very common building style in our native Pacific Northwest. With a plan and some elbow grease, you can add architectural interest to any wall in your home!