Note from Kirsten: DIY is always a mixed bag. Sometimes a project goes just how you want it to go, and sometimes it seems like every step goes horribly wrong. I find, often times there’s no one to blame but myself: I didn’t think through the design all the way, or I cut the same board to the wrong dimension three times in a row. But I notice that this all changes when I’m DIYing in a home. Because suddenly I’m not just dealing with all of my mistakes (or the way I’ve cut corners)—now I’m also dealing with the mysteries of what’s hidden inside a wall, or the reality that walls are rarely perfectly straight. It adds a whole other dynamic.

Understanding this added component, and anticipating I'm going to find something that wasn't built the “traditional” way (your floor may not be level, your wall may not be plumb, and all your joists might not be exactly 16” apart), this is the best way to prepare yourself for the time and effort it’s going to take to set yourself up for success.

This project was no exception to this rule, and provided us with many twists and turns that forced us to get creative in our problem solving. But Todd was the real mastermind behind it all, so I’ll pass this over to him:

Today we’re going to install a sliding barn door using Leatherneck Hardware Flat Track hardware. Leatherneck offers videos and installation guides on their website, which we recommend before you start your project. Reviewing Leatherneck's helpful information will give you a better handle on what’s ahead.

The most important thing to verify before you get going is that you have something solid to mount your new barn door track to. More on this later! For many homes, this means making sure there are wall studs or other framing behind the wallboard. An electronic stud finder can help a lot here.

Start by opening up your package of Flat Track hardware, and familiarize yourself with the parts and instructions. The track is the key element of barn door hardware, and it’s important to place it in the right spot both vertically and horizontally. 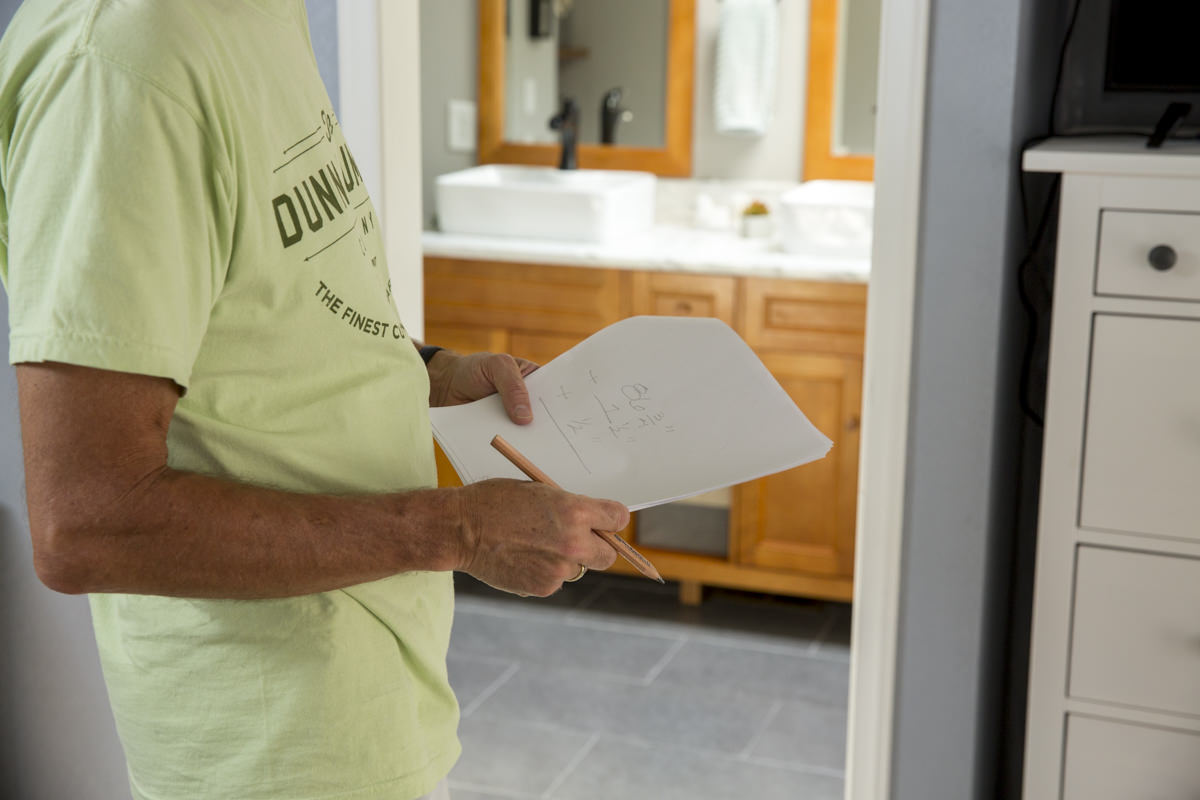 Following the instructions, locate the spot for your first hole by following a formula of door height + 1 3/4”, then measure that distance up from the floor. That’s where you’ll drill your first hole.

After you’ve marked the spot, drill a small hole through the wallboard. You want to hit wood behind the wallboard, so verify there is something to sink your bolts into. We like to keep a small vacuum on hand for sucking up post-drill dust.

As with many DIY projects, things don’t always go as planned—and this is where we hit a snag (or more accurately, hit air instead of wood). Time to improvise! Because we found dead air instead of wood directly behind the wallboard, we had to find a way to “see” what we were dealing with.

So, using an insulation stay (a straight piece of wire), we probed into our small hole and found solid wood about an inch back from the wallboard.

Having a space between the drywall and the framing meant adjusting our plan in two ways:

The backer board will keep the track spacers from popping through the drywall when we tighten them later on. For our backer board, we choose a 1x3 primed spruce board. The track will cover most of the 1x3. Since it’s already painted with primer, we can just use wall paint later to make it blend in. 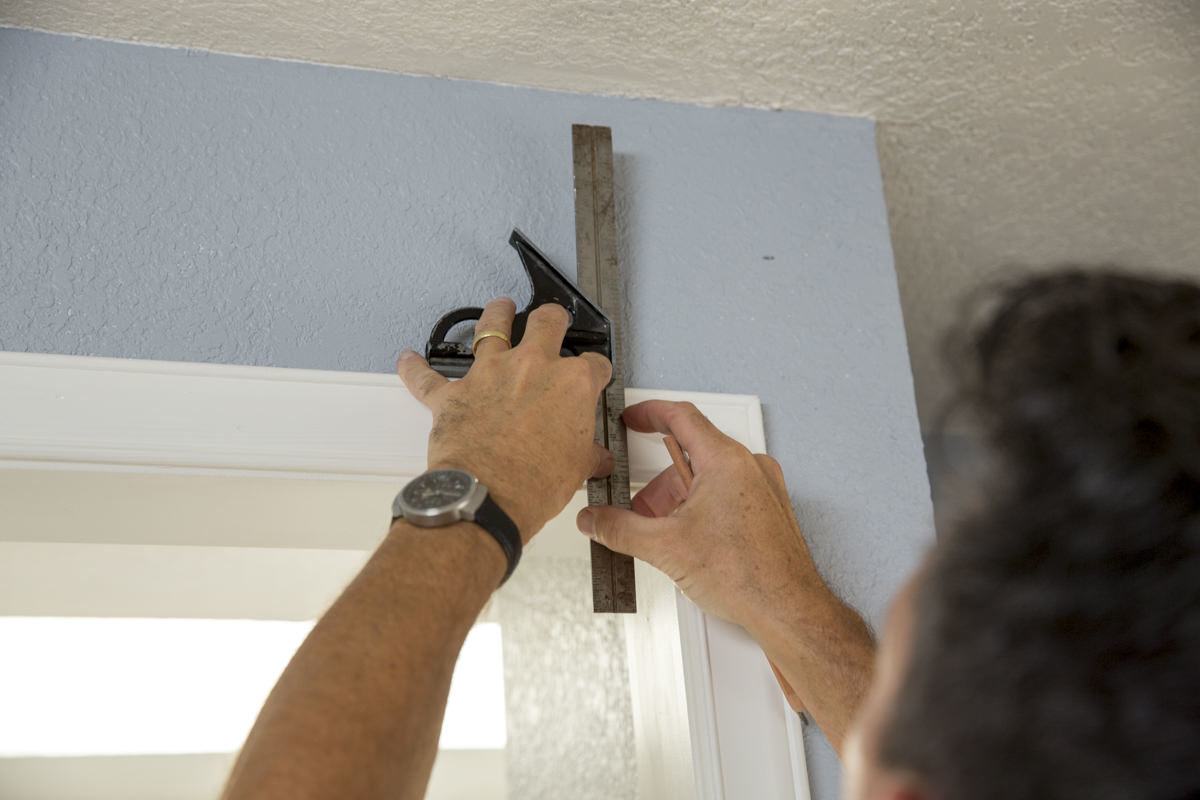 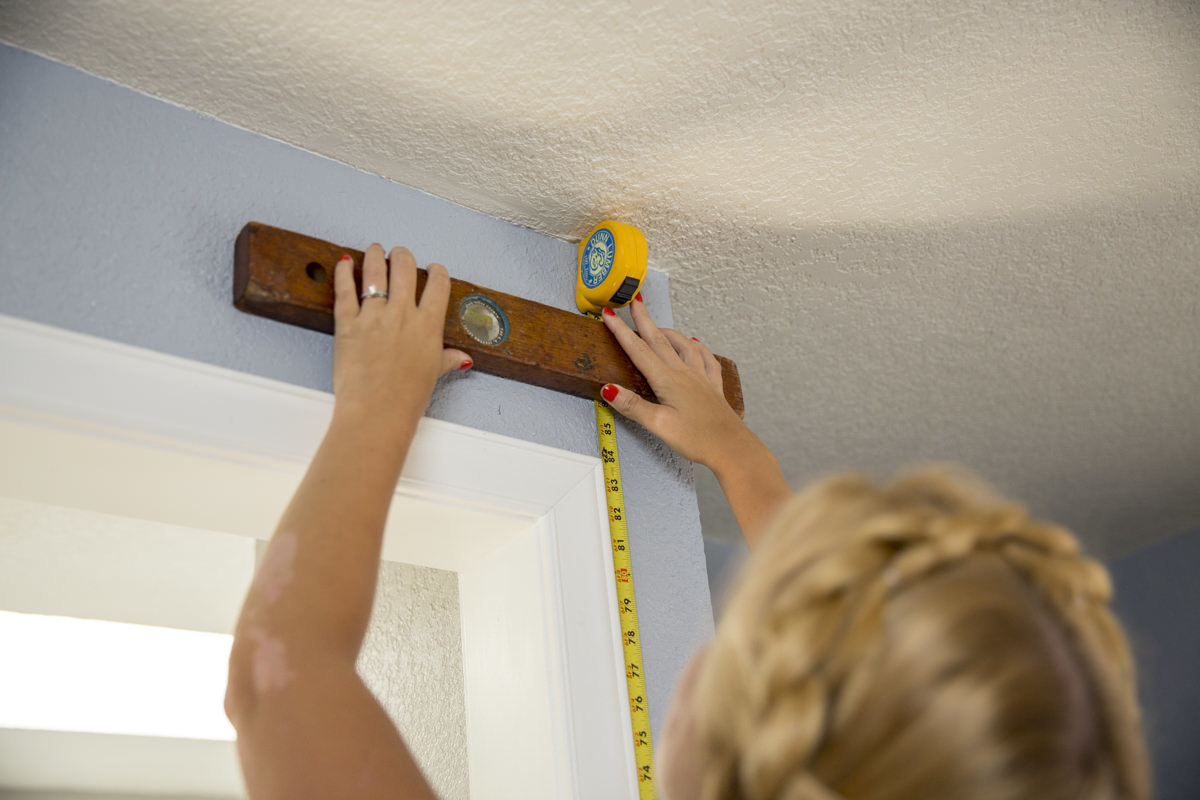 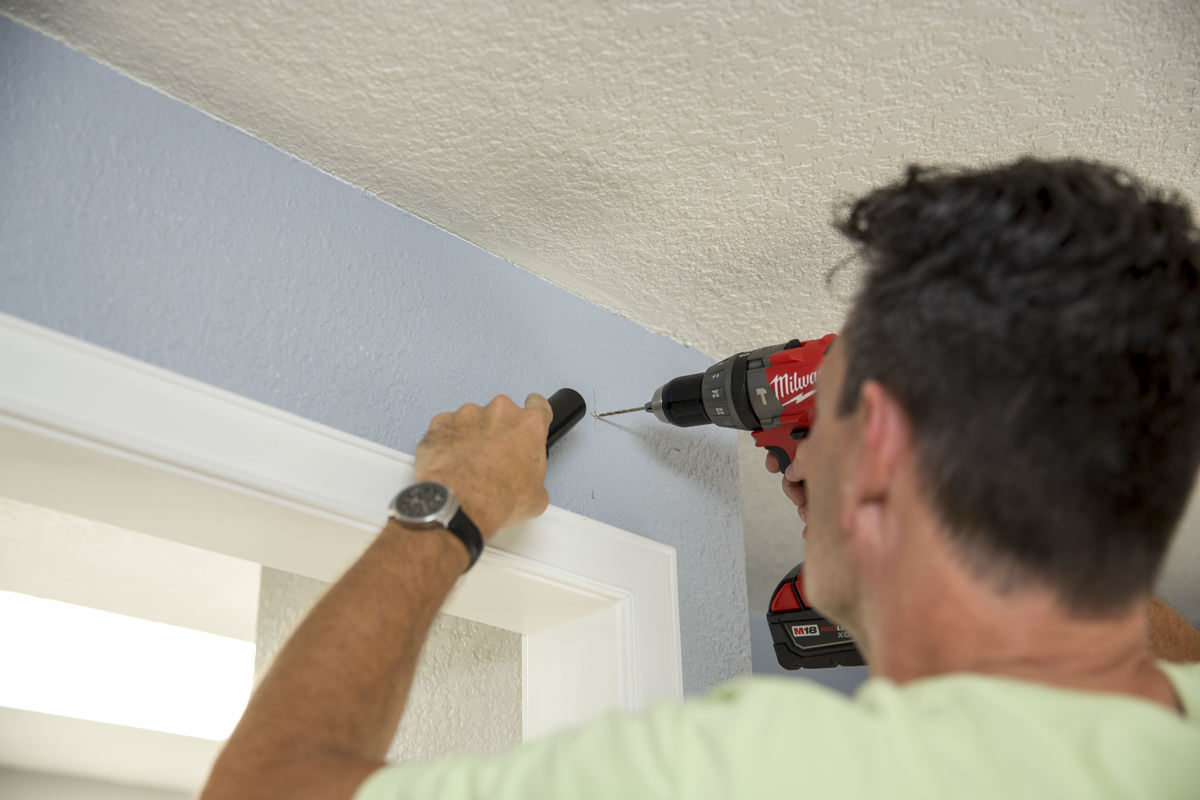 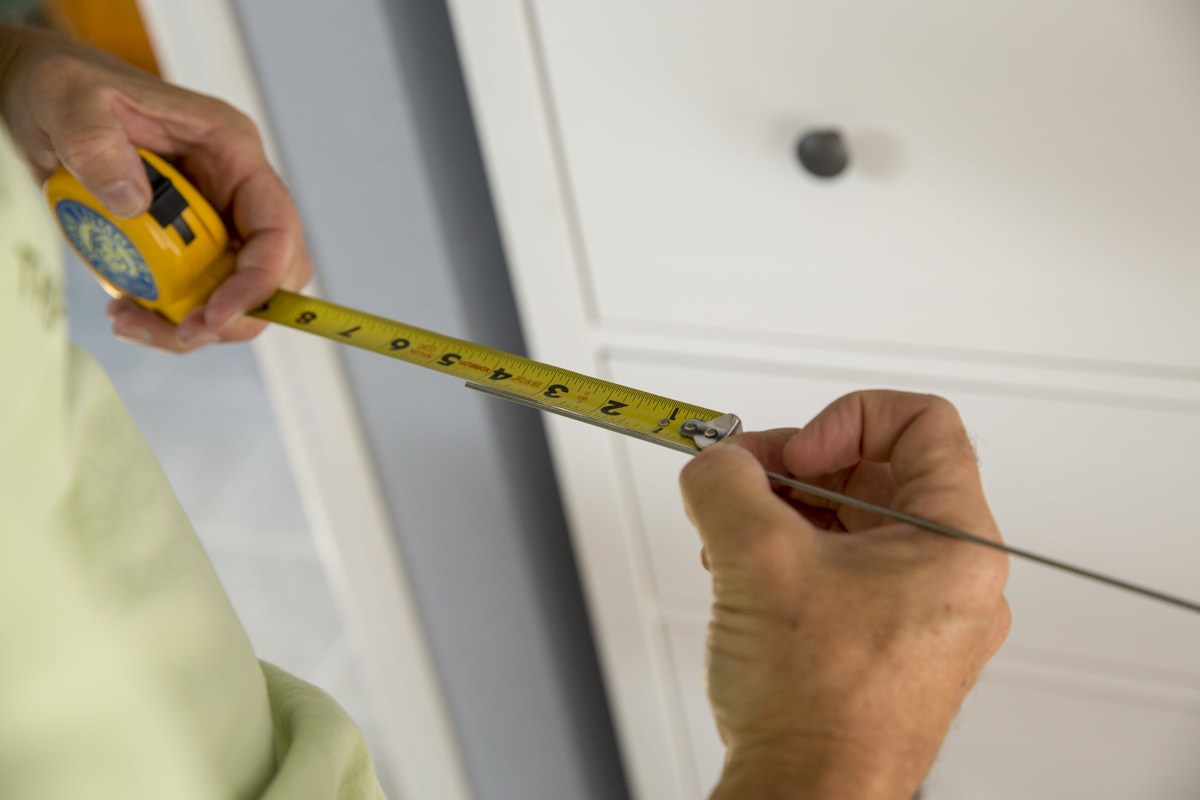 Measure the distance between the end holes of the track, then mark the spot for the next hole. It’s important to ensure the first and second holes are level with each other, otherwise your track won’t be. Drill another small hole at the end of the track, and make sure there’s wood to anchor into.

After careful measuring and “test holes,” it’s time to drill real holes. We drilled the first hole through the drywall into the framing behind. Then we lined up the track on top of the backer board and pre-drilled through all the holes.

Next, we screwed in our first lag most (but not all) of the way, making sure to thread it through all the proper pieces—which include a door stop, a track, a spacer, and the backer board.

After the lag screw is in, swing the backer board and track into place for the second hole. This is a great time to stop and triple check that your track is level. After verifying that it is, drill the hole at the other end of the track, pushing through the backer board and track and into the framing lumber, then securing the second end with a lag screw just like the first. Don't forget the stop on this second end.

Drill the remainder of the holes using the Flat Track spacers as a guide between the track and the backer board. Once they’re drilled, install the remaining lag screws. Then, tighten all the screws. Now your track is installed! 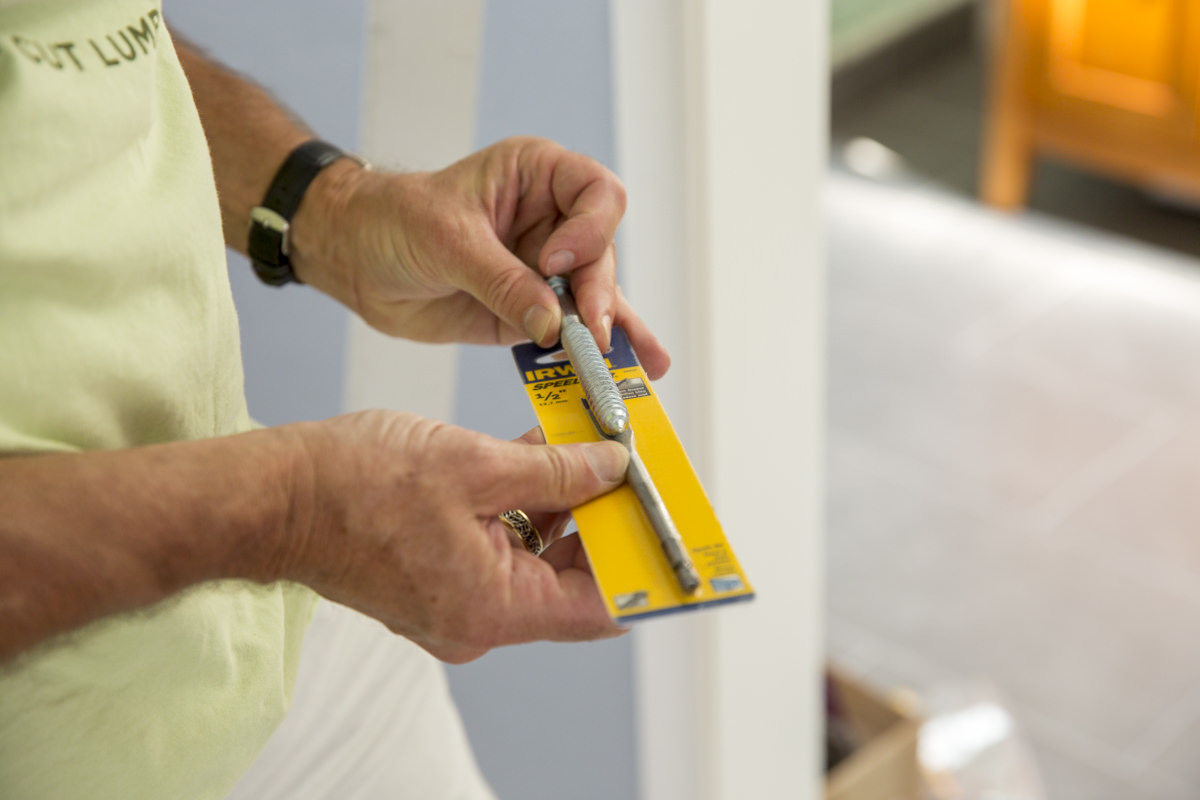 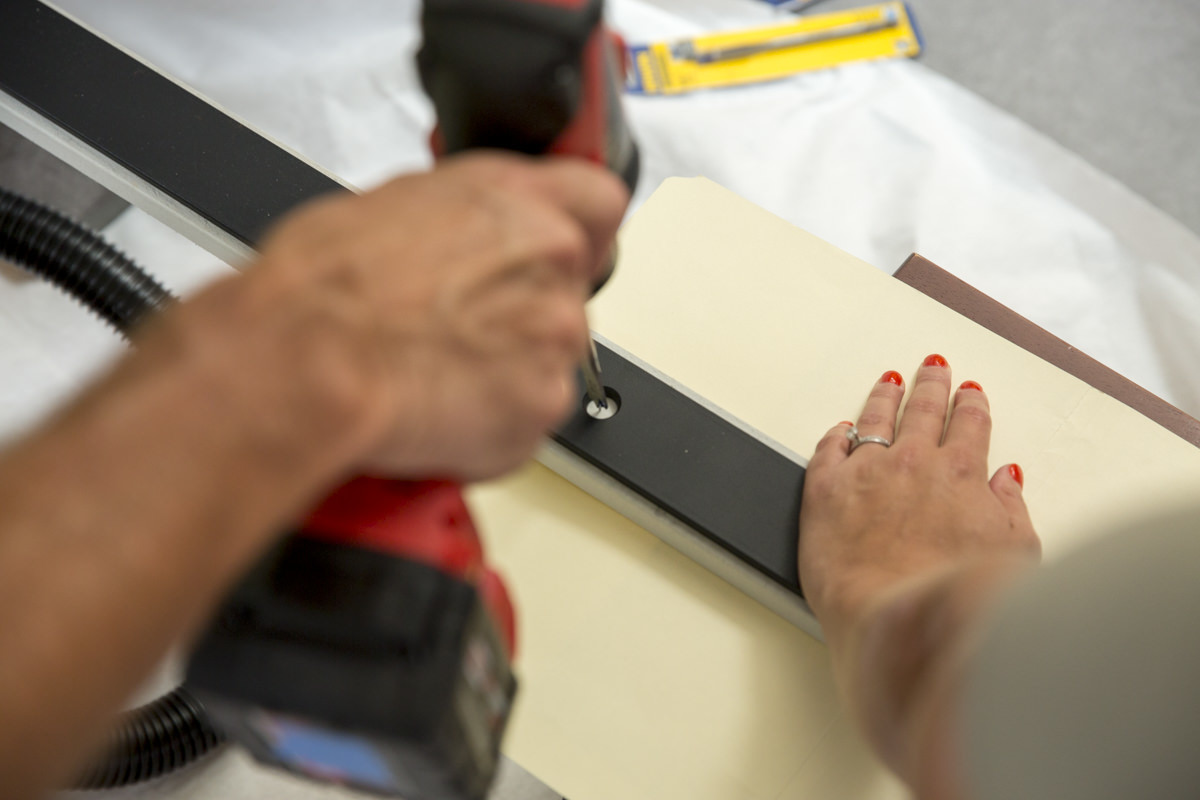 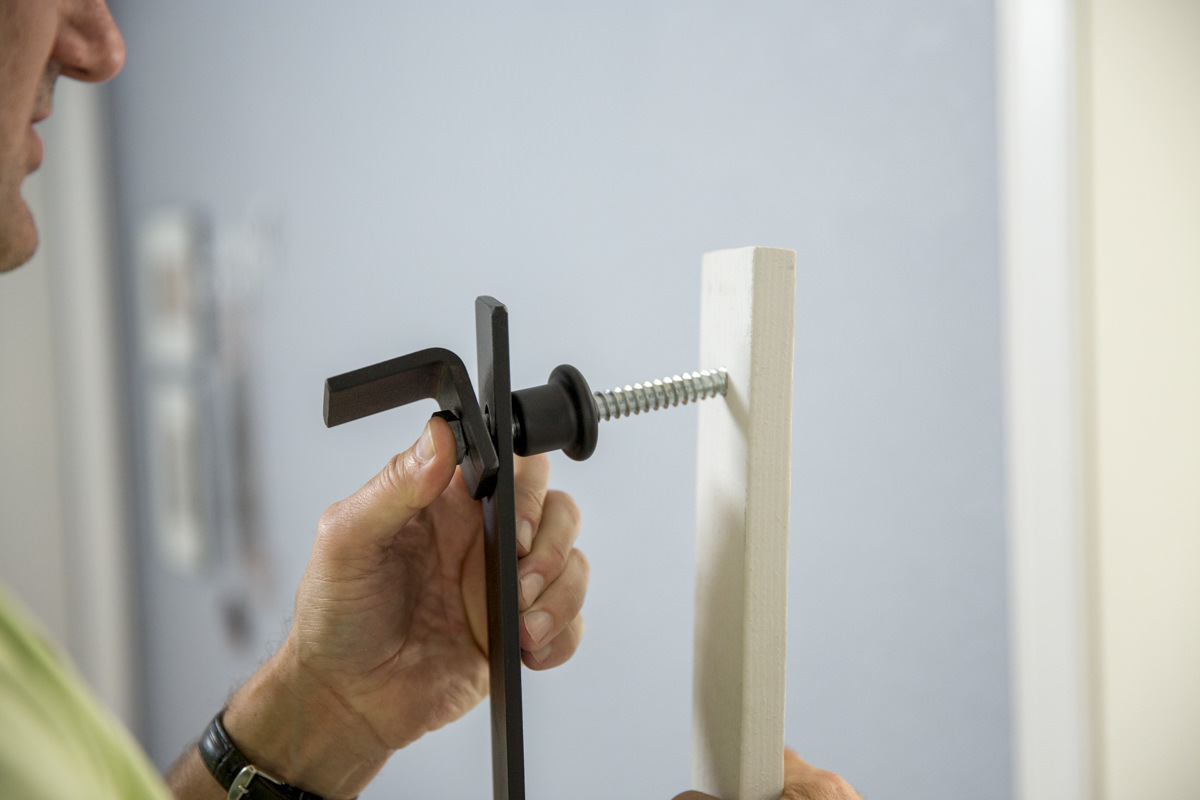 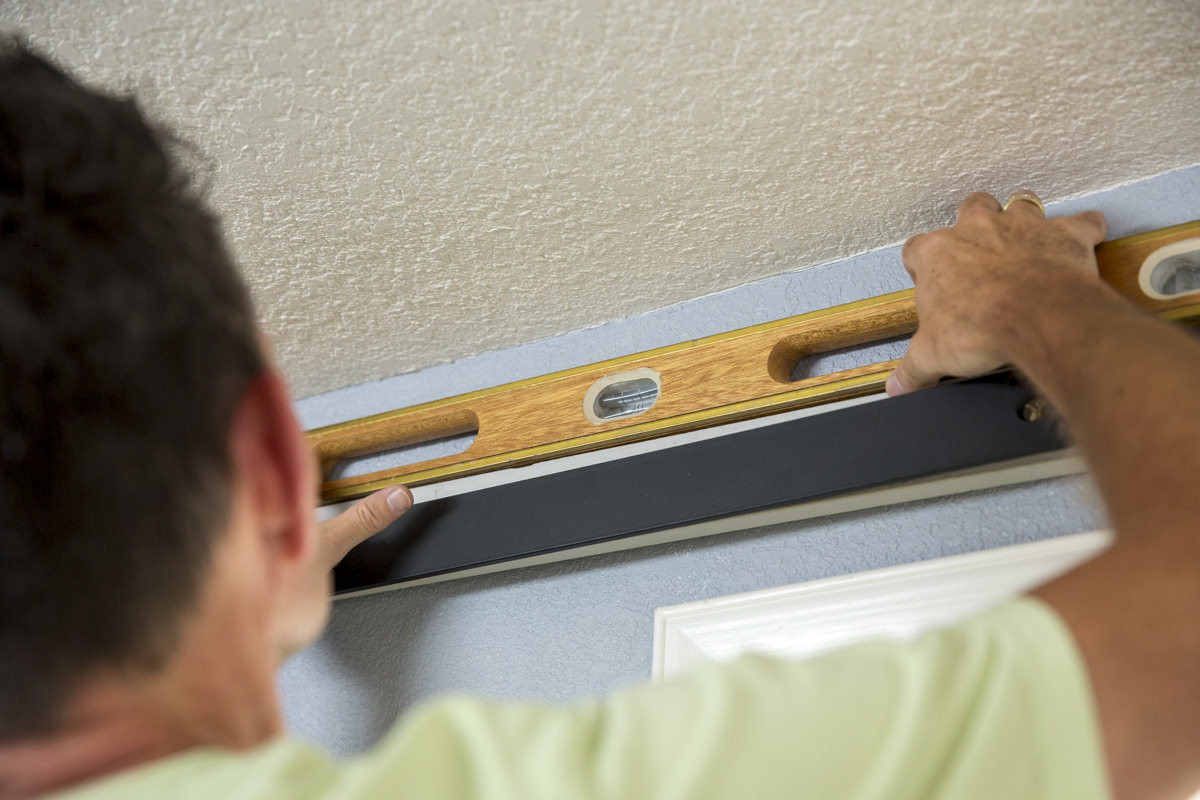 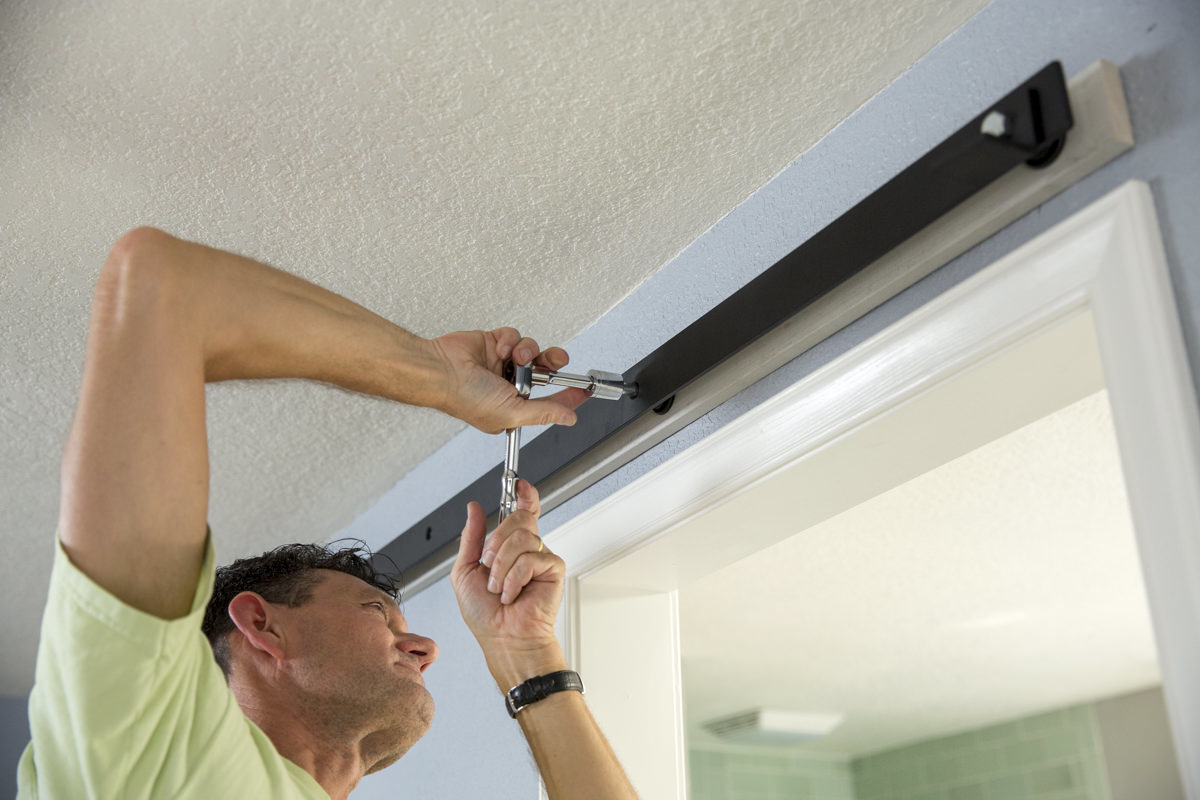 Step 4: Groove the Bottom of the Door

The door will glide along the track above with the help of a “fin guide” mounted to the floor. This guide requires a groove to be cut down the center of the bottom of the door that is 3/8” wide and 1/2” deep. The best way to do this is with a router,  but since we didn’t have one on hand, we made multiple passes with a circular saw using a guide. A word to the wise: a router would have been much easier. 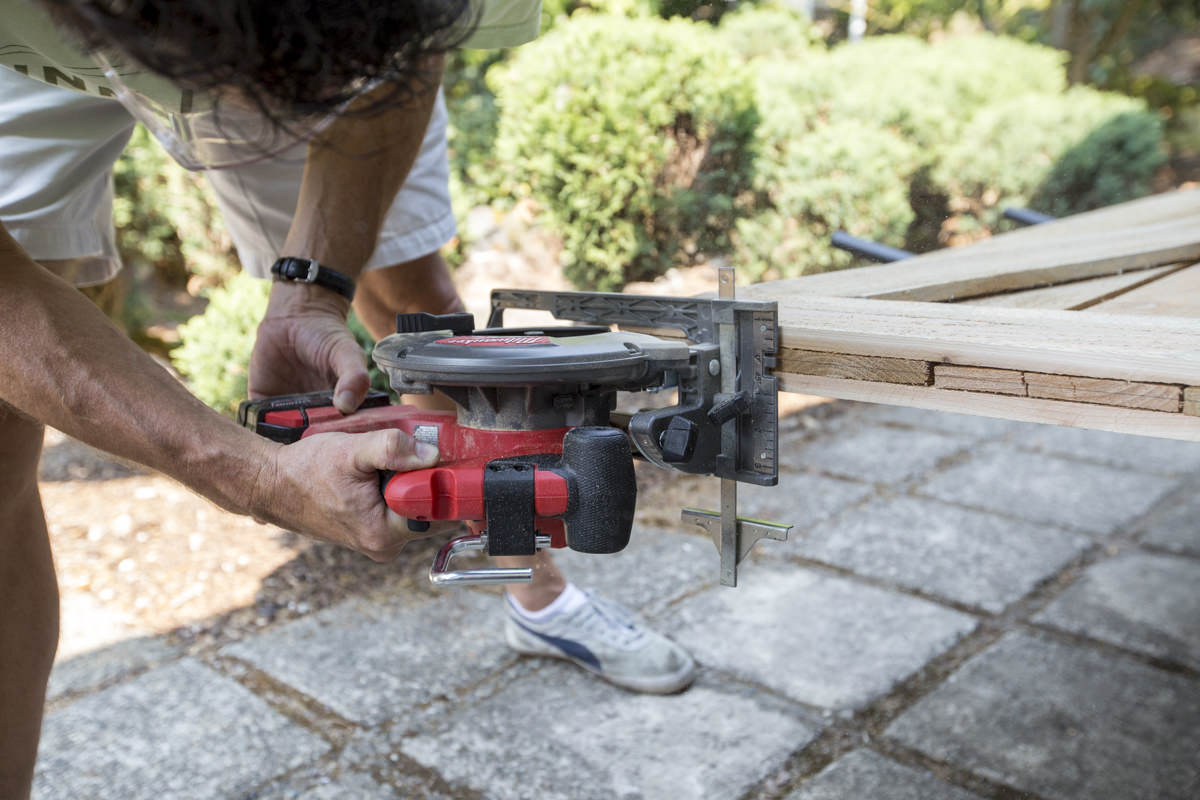 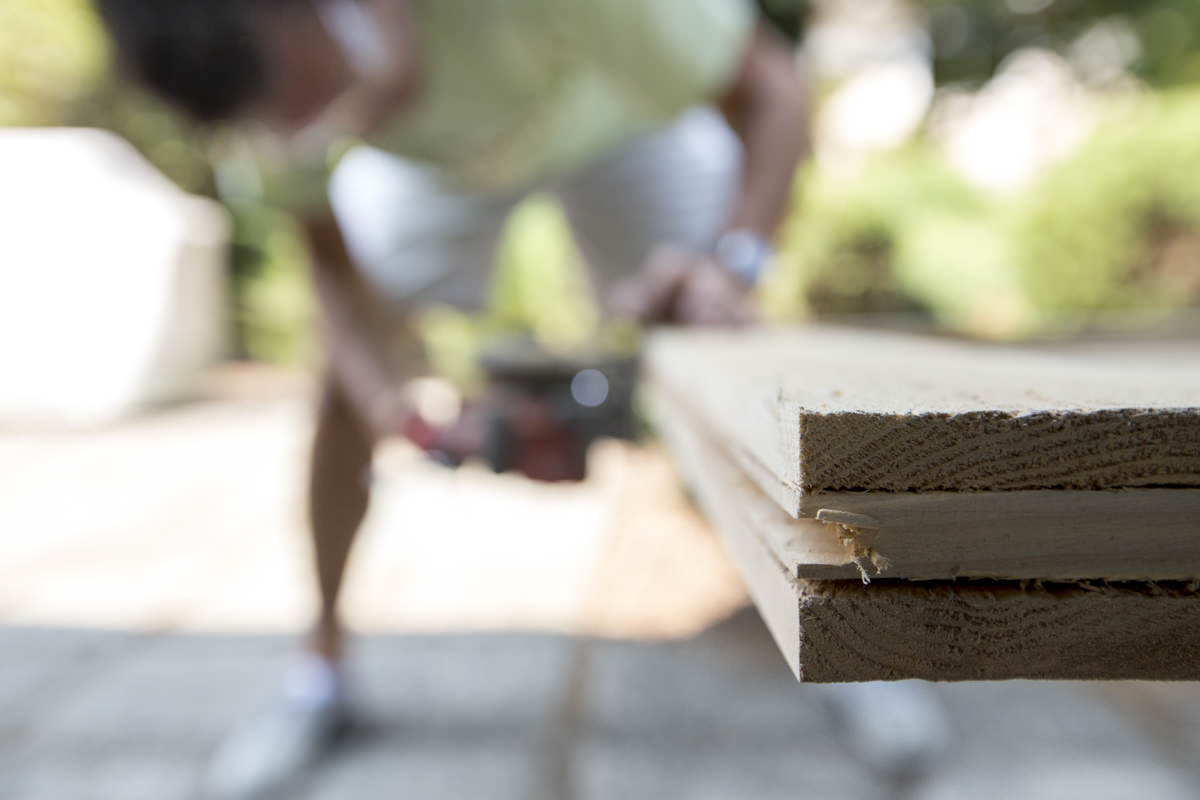 Now it’s time to mount the wheeled hangers on the door.

We held the hangers against the door in the recommended positions, marked the spots, and drilled the holes. To avoid splitting the wood, we drilled through one side just until the tip of the spade bit pierced the bottom side of the door. Then, we flipped the door over and finished drilling the four holes from that side.

This step is also where we pre-drilled holes on the top of the door for the anti-jump blocks. They’ll be installed later behind the hangers, but pre-drilling now makes installation much easier later on. 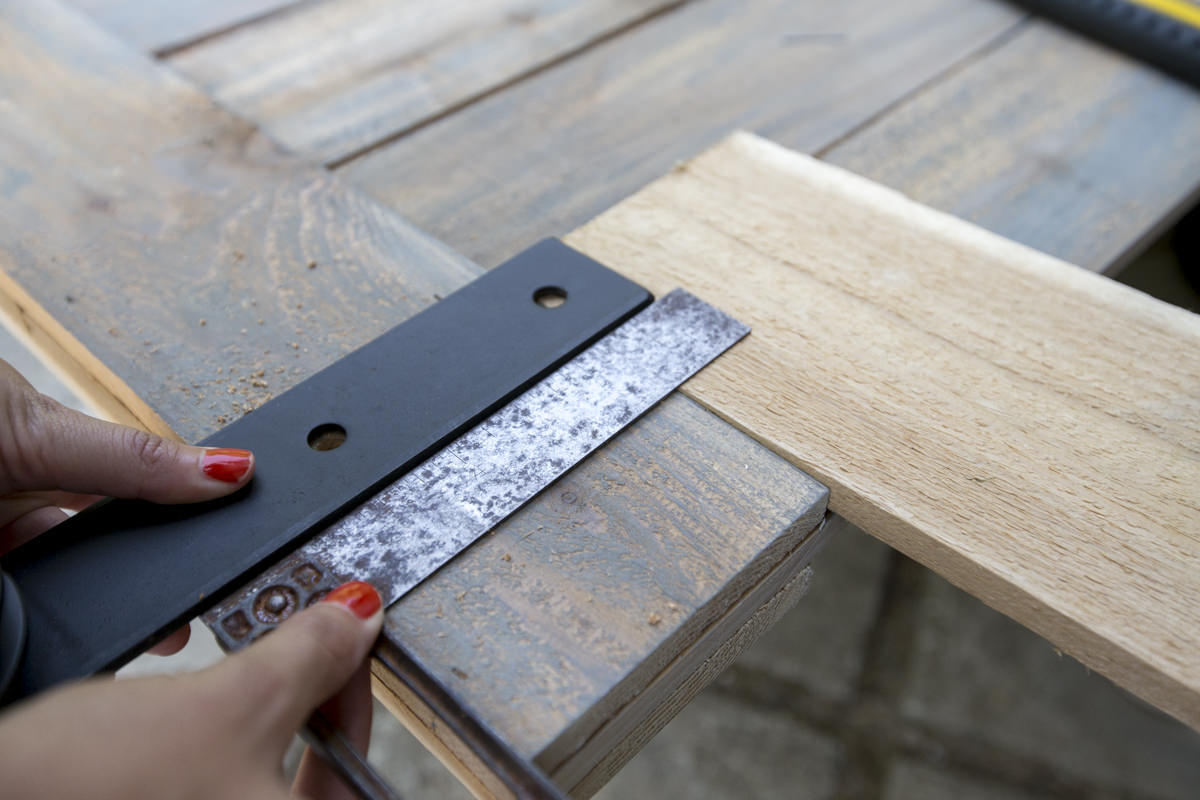 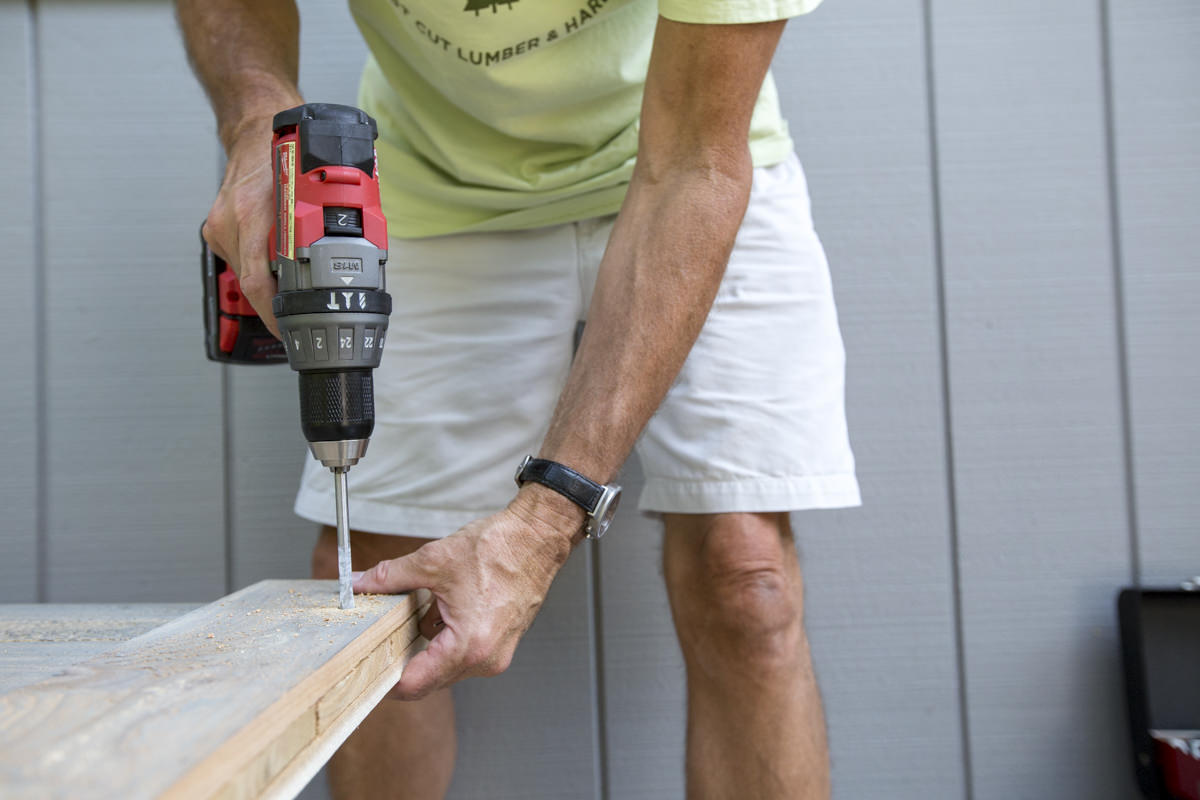 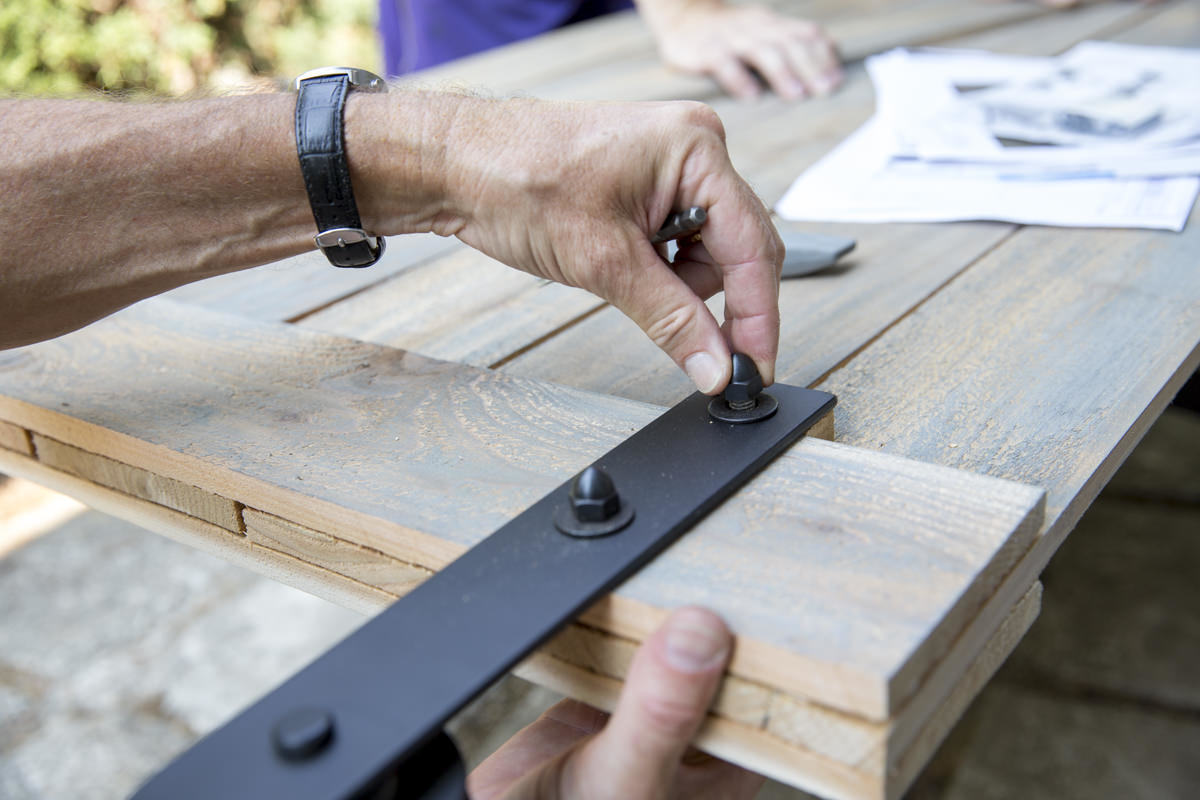 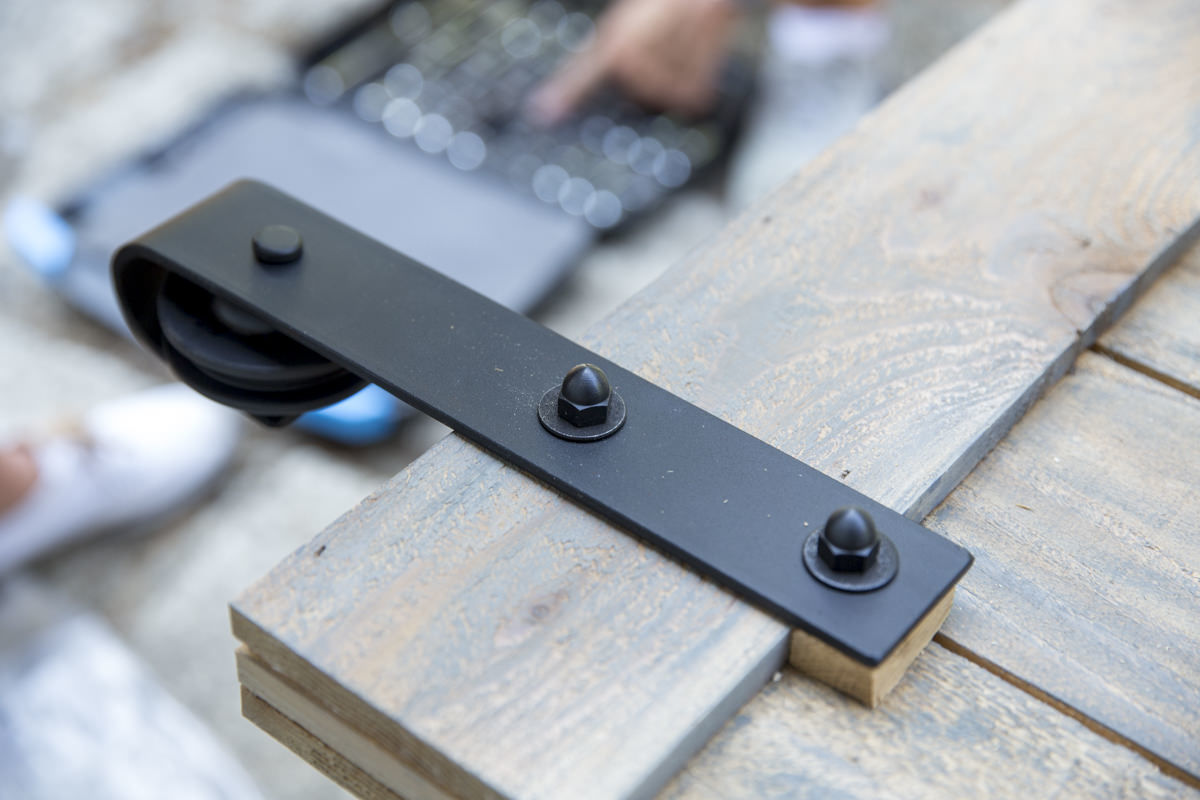 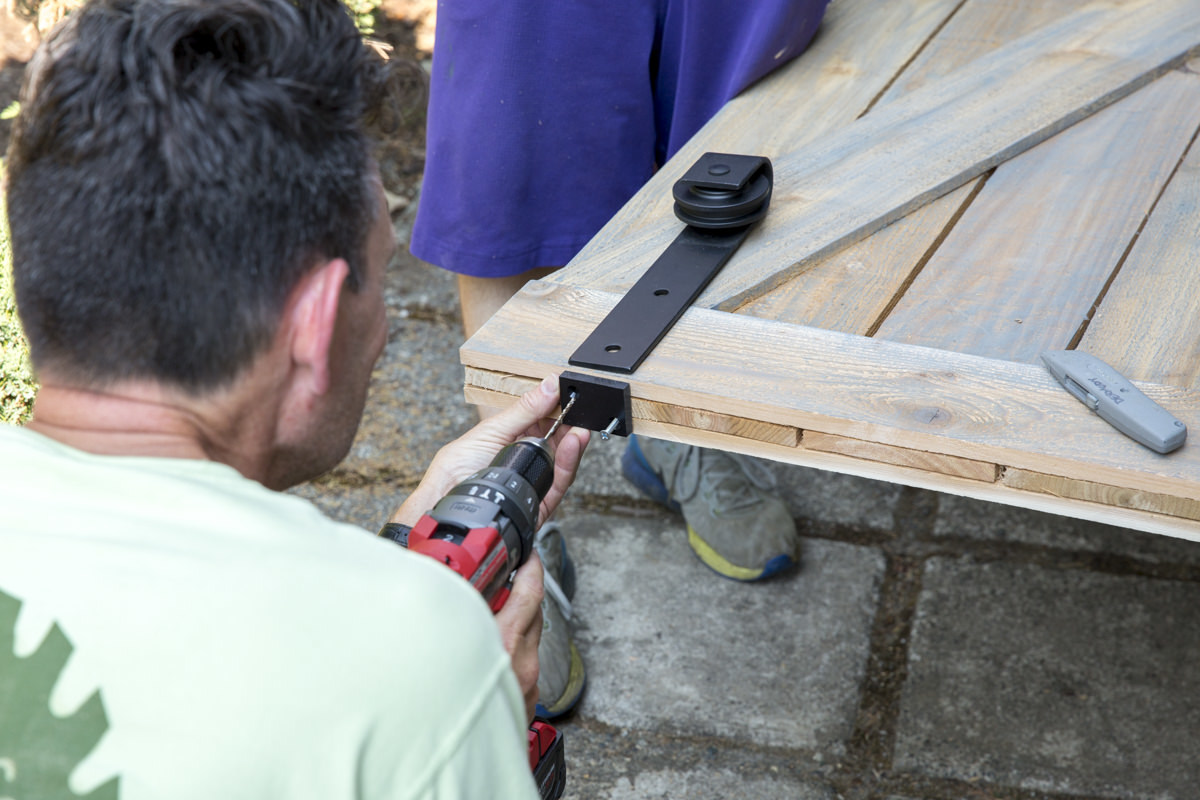 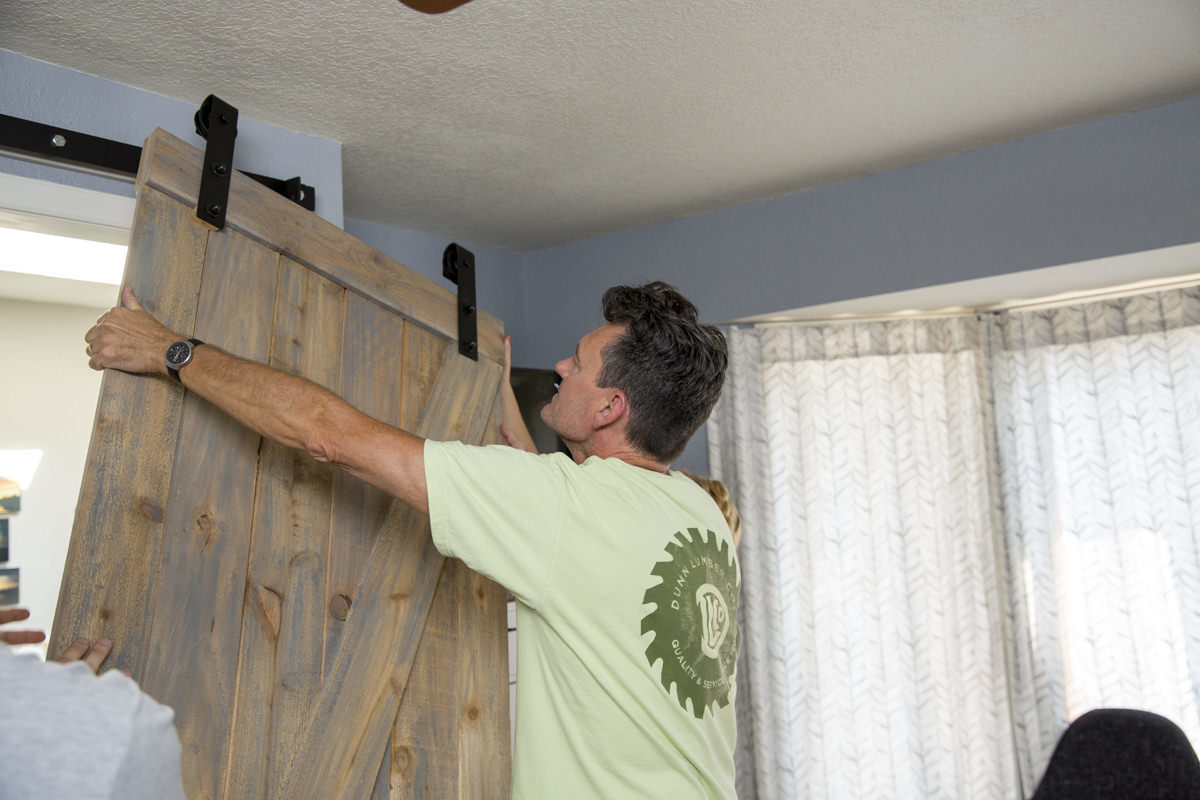 Now’s the time to place the fin guide and screw it to the floor. We installed it in the standard position, which is just to the side of the door opening and in a spot where it will remain engaged in the door’s groove when the door is open, closing, and closed. Hardly any walls are perfectly straight, so slide the door back and forth a few times and position the Fin Guide far enough out from the wall (so the door won’t rub against the wall or baseboard).

We marked the spot, removed the door, mounted the fin guide, and rehung the door. 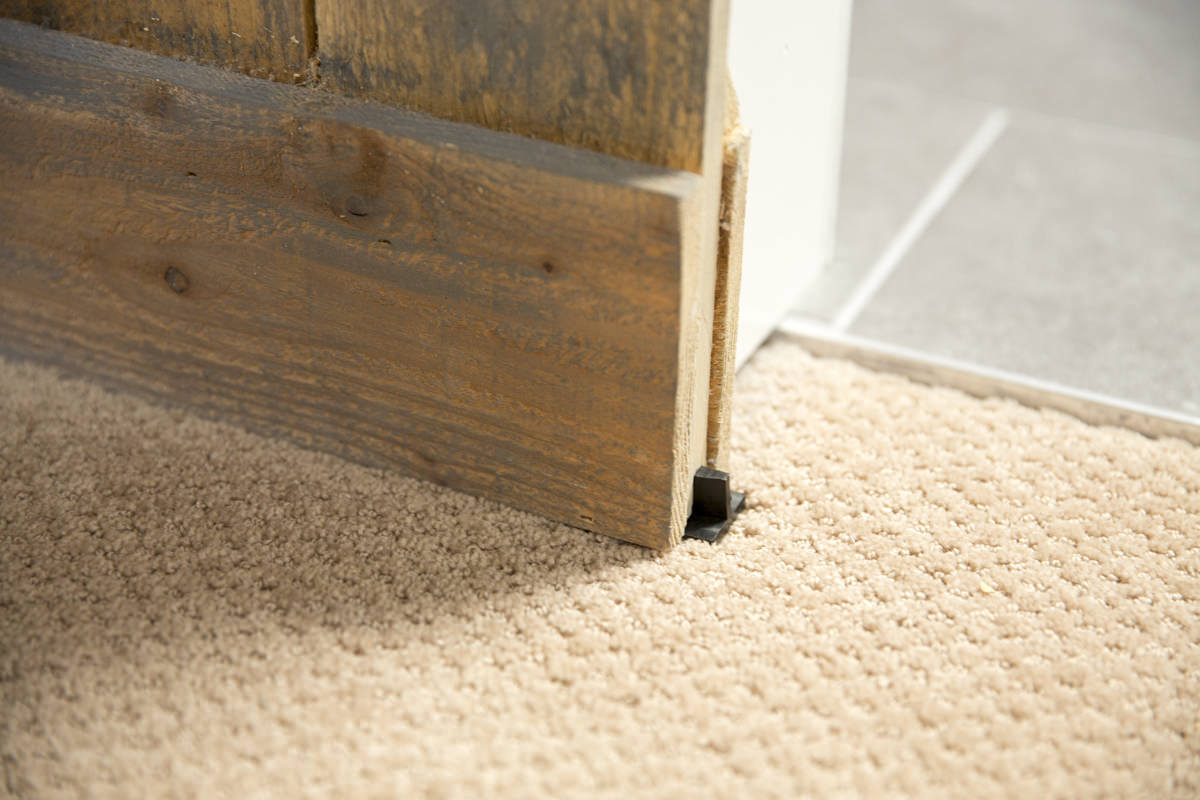 Now that the door is hung and the fin guide is engaged, screw the two anti-jump blocks to the top of the door. These keep the door from rocking and the wheels from jumping off the track. 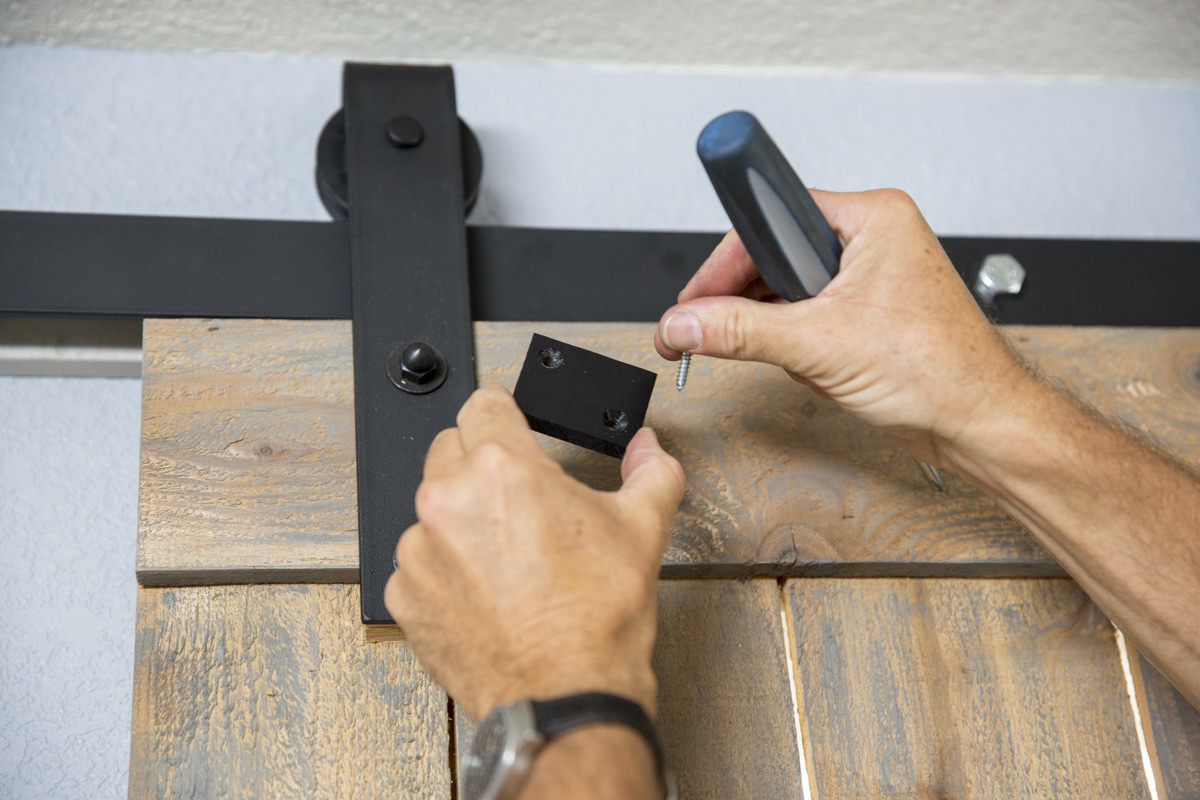 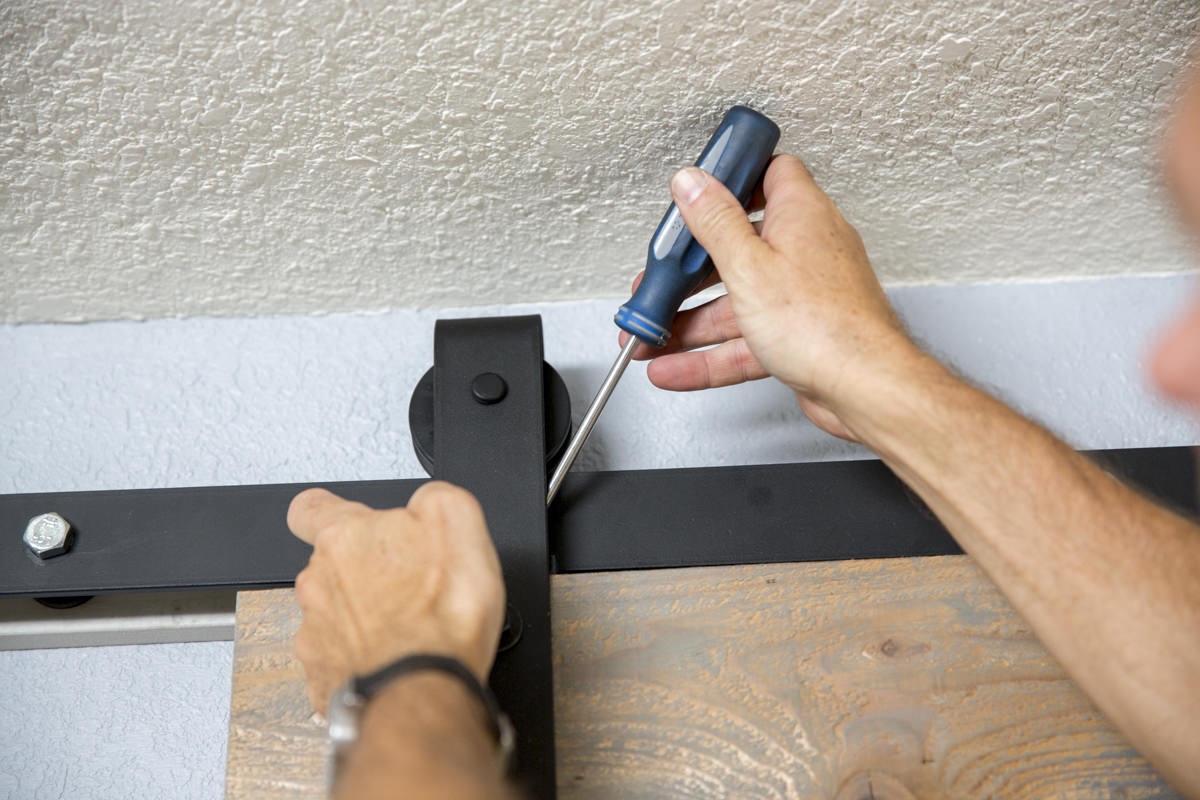 Finally, install the self-adhesive pads to the door stops. These will keep the door from slamming hard against the metal stops of the track. 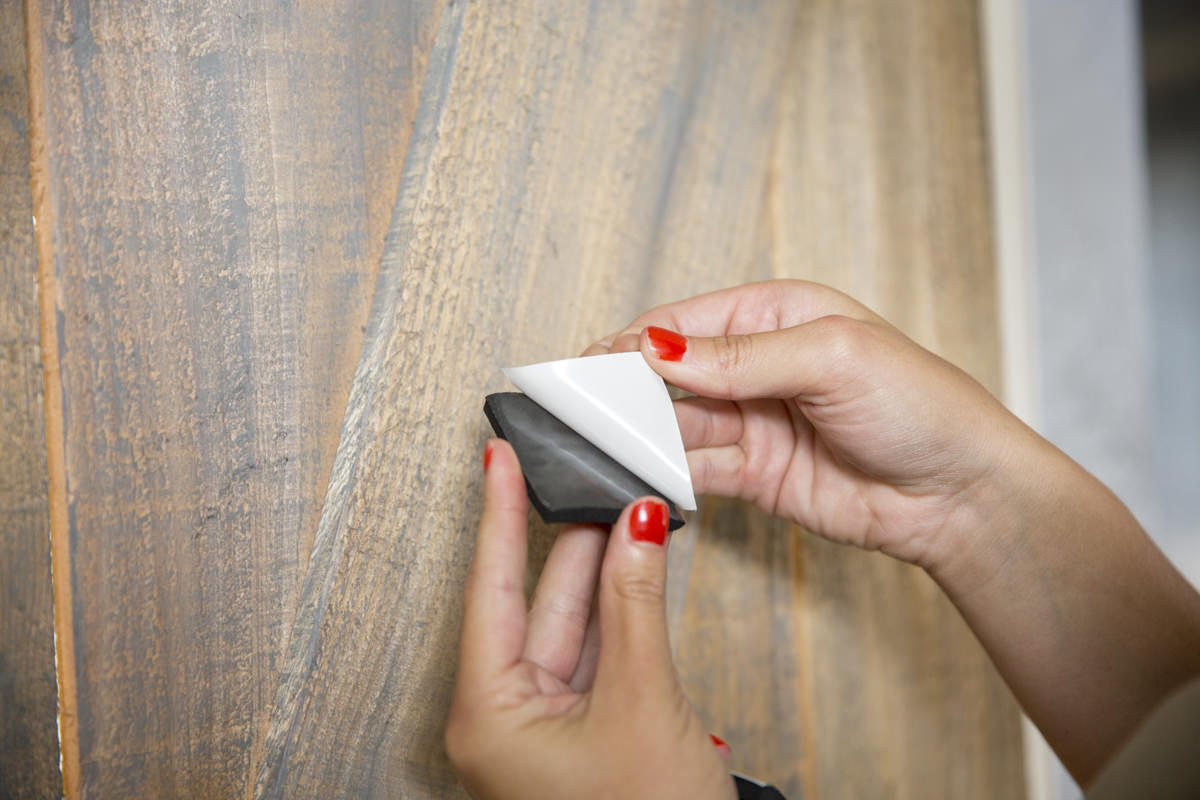 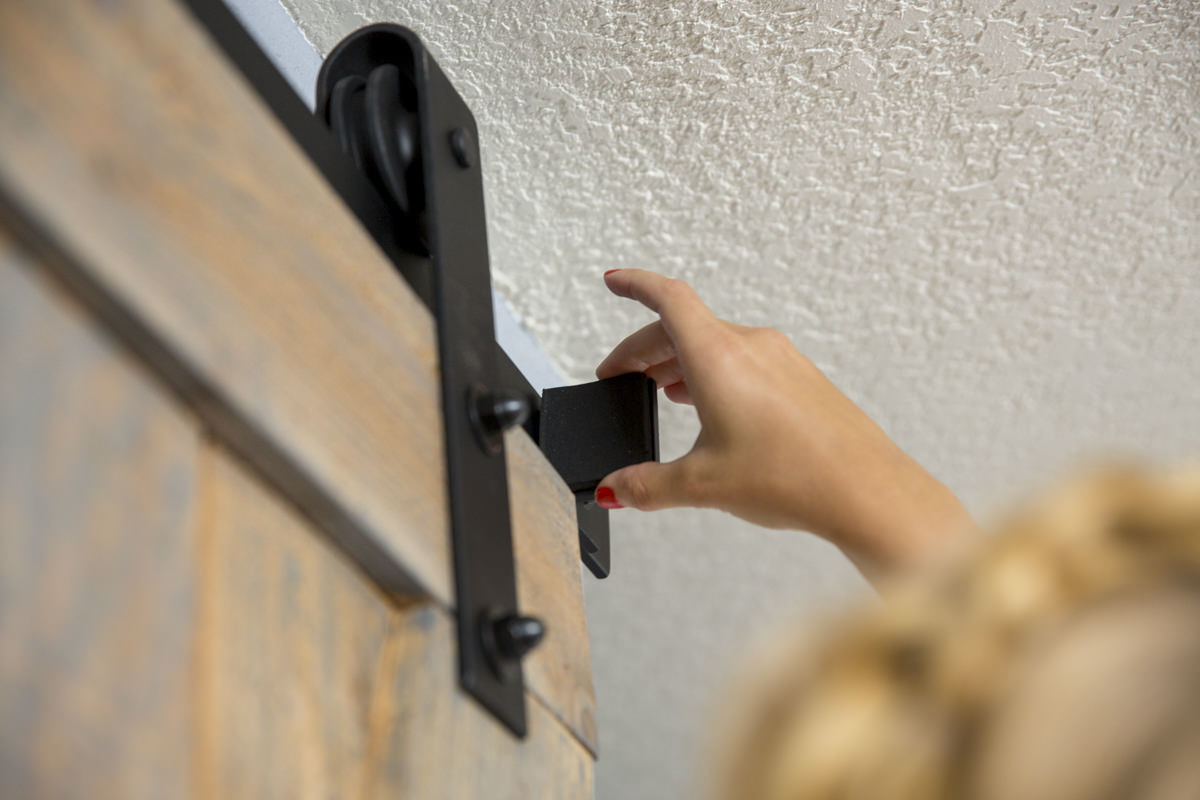 A sliding barn door is a great way to add a little privacy to an open space, or add rustic character to an existing door frame. 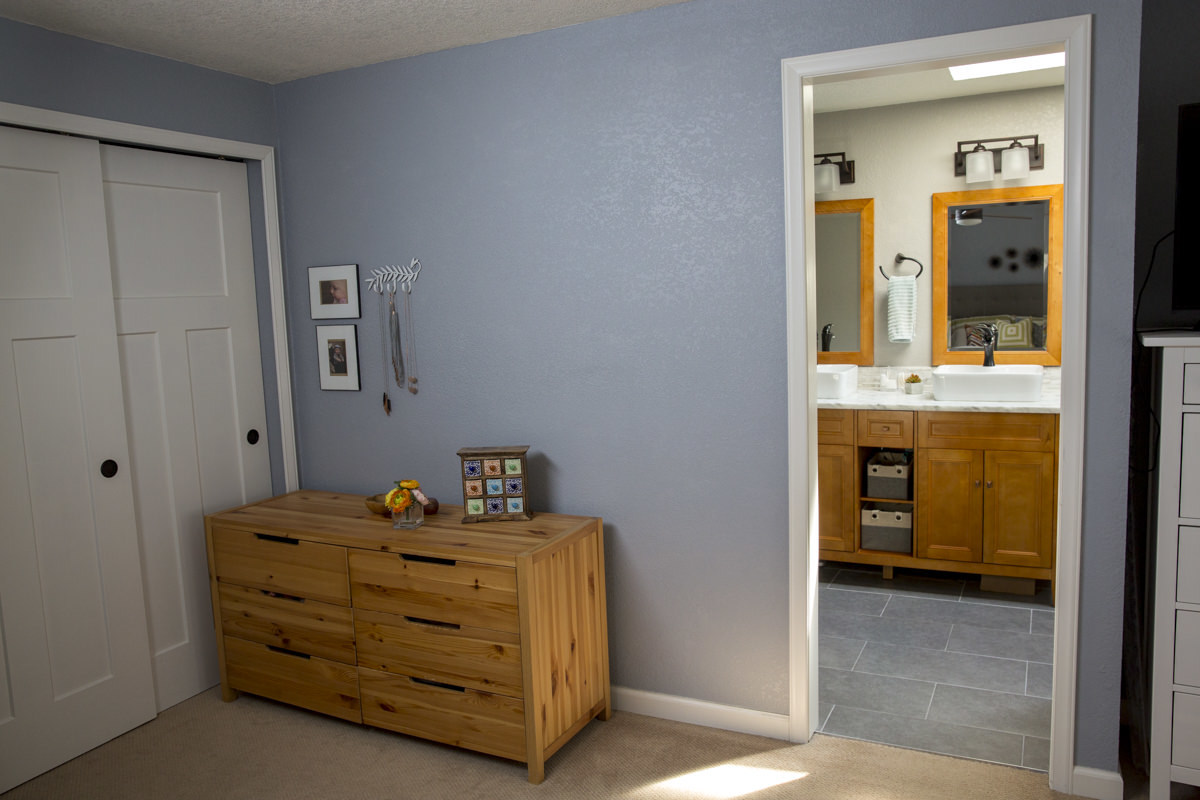 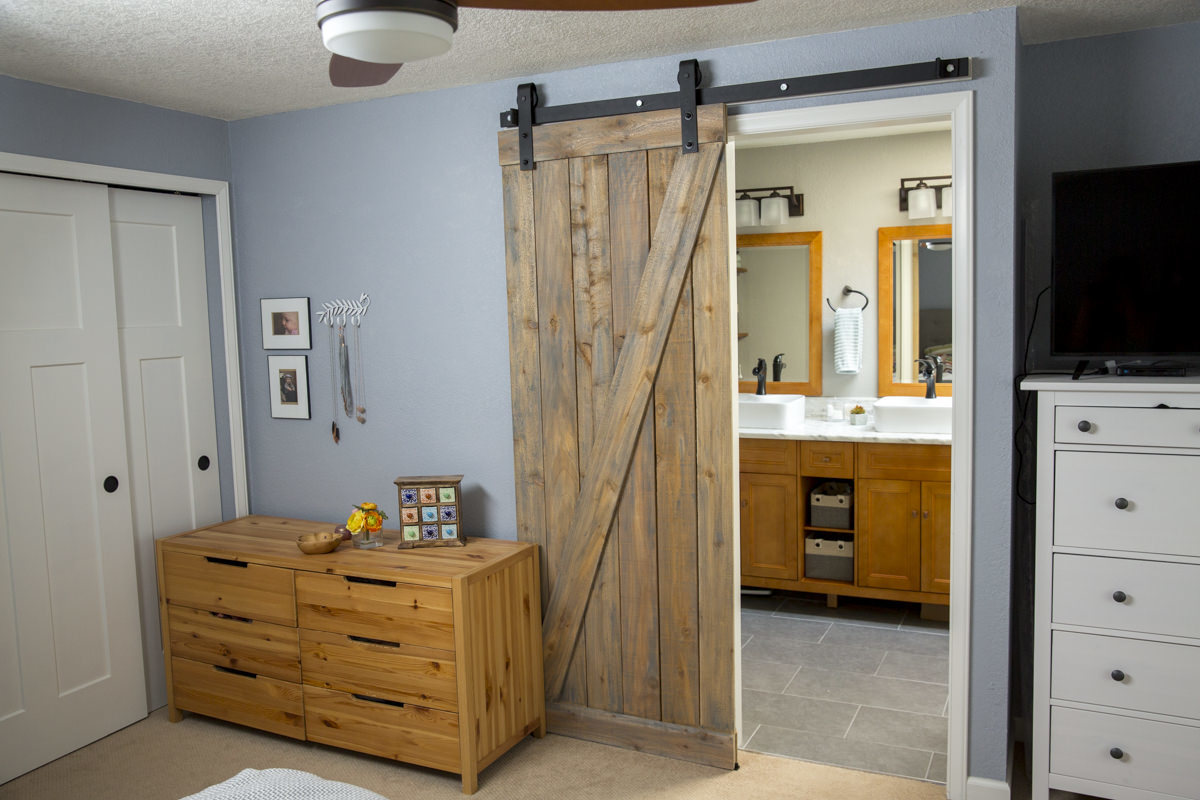 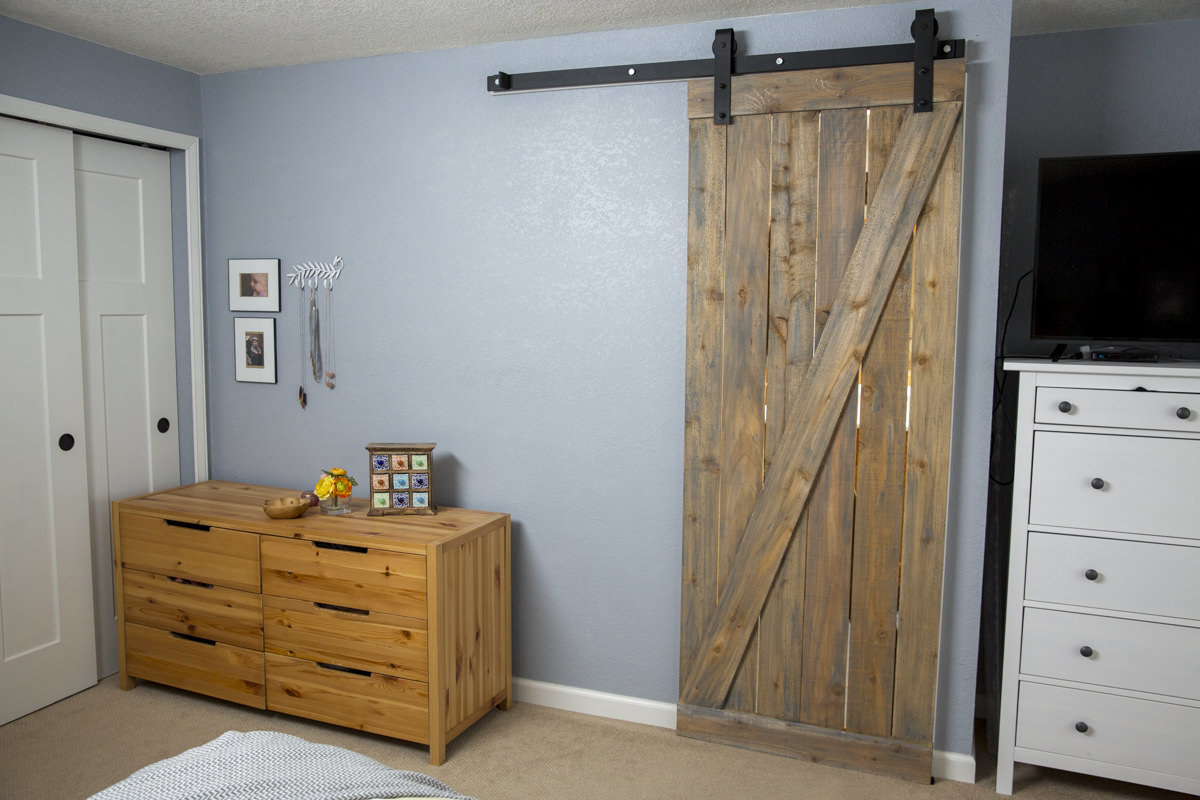 If you have a house full of guests, make this the night before, throw it in the oven in the morning, and hang out with people while it bakes, without being stressed out.

How to Make a DIY Kid's Scooter

Gather a few simple materials to build this fun, colorful, and customized ride.

Five Fun DIY Projects to Do at Home with Your Kids

No school? No problem! Keep your little ones busy with these five kid-friendly crafts.