Growing up, we had a scarecrow that came out from the garage around this time of year. He wore a very colorful plaid shirt and was a happy-looking scarecrow. But he had one flaw: he wasn’t stuffed with hay. He was just a pair of clothes hanging on a wood frame, and I found it very disappointing. After taking on this project, it suddenly all makes sense. I had no concept of what a messy thing hay is. There was no way my parents could have ever brought a hay-stuffed scarecrow into our home! I started working on this scarecrow, and within 20 minutes there was hay everywhere—I was breathing in hay dust, and the whole place smelled like a barn (it was very exciting for my cat). Hay-stuffed scarecrows are so classic and are a marker of the season, but they should definitely be made and kept outside at all times.

This project required a few different trips to a few different stores. The lumber, of course, came from Dunn Lumber. The hay was bought in two small bales from a local craft store. The bales looked too small to stuff an entire scarecrow, but they were packed tight and I had plenty left over at the end. For the clothing, I went to a thrift store and aimed to get medium-sized men’s clothing for a medium-sized scarecrow. I also tried to find clothes that didn’t look like a city boy trying to be a country boy—I wanted my scarecrow to look authentic. My one overlook was not paying enough attention to the length of the pants. They were a good width, but ended up being on the shorter side, which really stood out once the bottoms were tied together. Learn from my lesson and make sure the clothes you buy are proportional to each other unless you're going for a high-water look. With that in mind, let's get to it.

I realized partway through this step that you can’t put on the shirt after the crosspiece and the vertical piece are attached, because that would be like trying to put on your clothes in the morning with your arms fully extended out from your body. (Not easy.)

So, first, slide the shirt sleeves onto the crosspiece. Then, position the crosspiece 10” down from the vertical piece. Secure with 3” nails or screws.

Tie the bottoms of each pant leg together with some jute, then stuff each leg with straw up to the top of the leg (but not past the crotch). For people who have about as much farm knowledge as I do, here’s a heads up: hay is messy and pretty dirty. This is definitely a project to do in the garage or outside. I recommend wearing work gloves to make the experience more enjoyable and a mask if you’re susceptible to allergies.

Cut a hole in the crotch of the pants and slide them over the vertical post of the frame. Button the shirt and tuck it into the pants.

Now it’s time to secure the pants to the shirt so they stay on the scarecrow. Arrange the shirt how you like and start by sewing the shirt to the pants at the center front, center back, and both sides with a few quick stitches. This will help keep everything where you want it as you finish sewing. Sew the shirt to the pants all the way around with large whipstitches. I used a light-colored thread, which makes it easier for you to see what I’m doing, but I’d recommend using a dark blue thread that matches the jeans.

Unbutton the front of the shirt and stuff the top of the pants with hay. Stuff the shirt with hay, buttoning as you go.

I added some extra hay poking out at the end of the sleeves. At this point, I realized it’s difficult to keep the sleeves exactly where you want them. So, position your sleeves until you like how they look, then staple them in place with a staple gun.

I used canvas fabric I had left over, but you can also pick up fabric from the thrift store for this this.

Lay your fabric folded in half. Trace out a circle approximately 11 3/4”, using a bowl or plate as a guide. Add a neck 7” wide at the base of the head. Cut out and sew the two pieces together (you can do this by hand or with a sewing machine). Trace out a face using our template and use paint to make eyes, a nose, and a mouth. I used acrylic paint markers because I prefer markers to paintbrushes, but do whatever makes most sense to you. 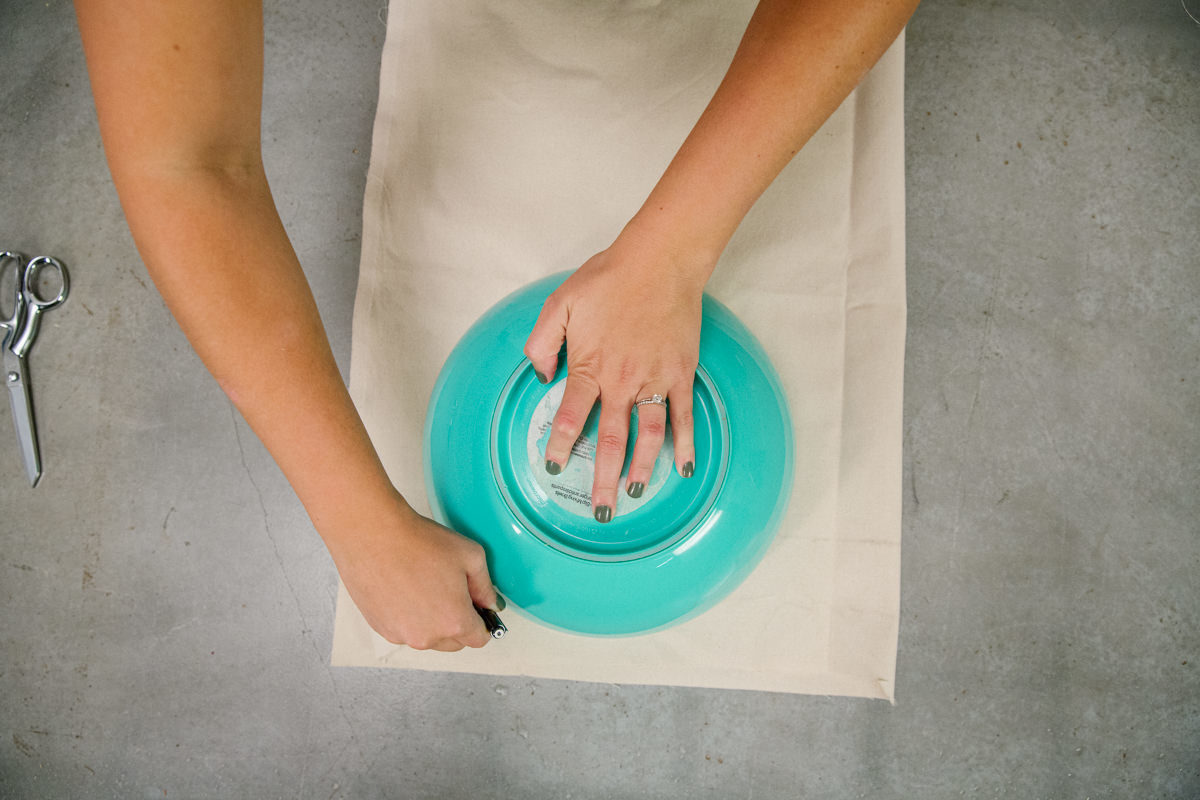 If your scarecrow is going to live in your garden, you’ll want to put him in the ground now, before he has a head. Position him in the soil and pound on the top of the post with a rubber mallet or block of wood and a hammer.

Stuff the scarecrow’s head with hay. Fit it onto the top of the vertical post and position it until you’re satisfied with how it looks.

Lastly, you can add a rope belt, gloves, boots, or extra hay that will stick out of the collar of the shirt or the pant legs.

You now have a friendly scarecrow to keep in your garden for the remainder of fall. Have fun picking out its clothes and accessorizing—while we kept Bob pretty traditional (yes, we gave him a name), why not give your scarecrow a little personality? Once your scarecrow has found its home, try out a garden DIY like our handmade garden trellis, or check out our guide to growing your own vegetables. We even have a DIY for a log carrier you’re sure to use throughout the fall season—it's perfect for harvest party bonfires.

How to Build an Outdoor Fire Pit

An outdoor fire makes a great gathering spot for deep fireside chats, stargazing, and of course—s’mores and marshmallows!

Are there some younger members of your Christmas shopping list? We have just the thing! These blocks are simple enough for a small child to enjoy. You can also personalize them to suit the taste of each individual child.

How to Color Easter Eggs with Natural Dyes