A hammock stand needs a hammock to complete itself, and we've got just the thing—a DIY hammock tutorial.

Through the process of building this DIY hammock stand, I discovered that hammock stands are all about physics, and when you launch your body into the hammock to start swaying, the two opposite posts will want to lean toward each other. I learned this the hard way, when my friend took it for its inaugural swing and the two vertical posts were suddenly bent horizontally and lifted off the ground in a very scary way—not what we were going for. Making this DIY hammock stand sturdy enough was quite the challenge, but after some trial and error, and more trial, it turned out to be a huge success!

Unsurprisingly, this was a multi-phased project. The design we’re working through today is version 3.0. The original design had a two-by-four spanning between the two posts. We swapped this for a four-by-four in version 2.0—which helped tremendously—but we wanted maximum stability, so we added longer braces on either side of the posts. Now the stand is staying on solid ground like it should!

In related news, this also happens to be Dunn DIY’s fourth anniversary (!) post, and it’s so fitting. This hammock stand DIY completely represents the journey I’ve taken since the inception of Dunn DIY. I started at a point where I’d run into a problem and have no idea how to fix it and had to lean on a bunch of different people to answer all my questions (thanks, guys!), to being at a place now where, if something goes wrong, I know immediately what needs to be changed. Granted, it’s still a process, but it’s a process that actually ends with a finished project—not with something that gets tossed aside for something easier. Now, DIYing is an integral part of my life and has become such a natural way to solve a problem. Can’t find it? Oh, I’ll build it. It’s really empowering, and makes such a difference in the way I approach everything—I hope as you’ve made these projects yours, you’ve found the same sense of empowerment and ownership, too.

OK, enough sentimentality—let’s get to the hammock stand. 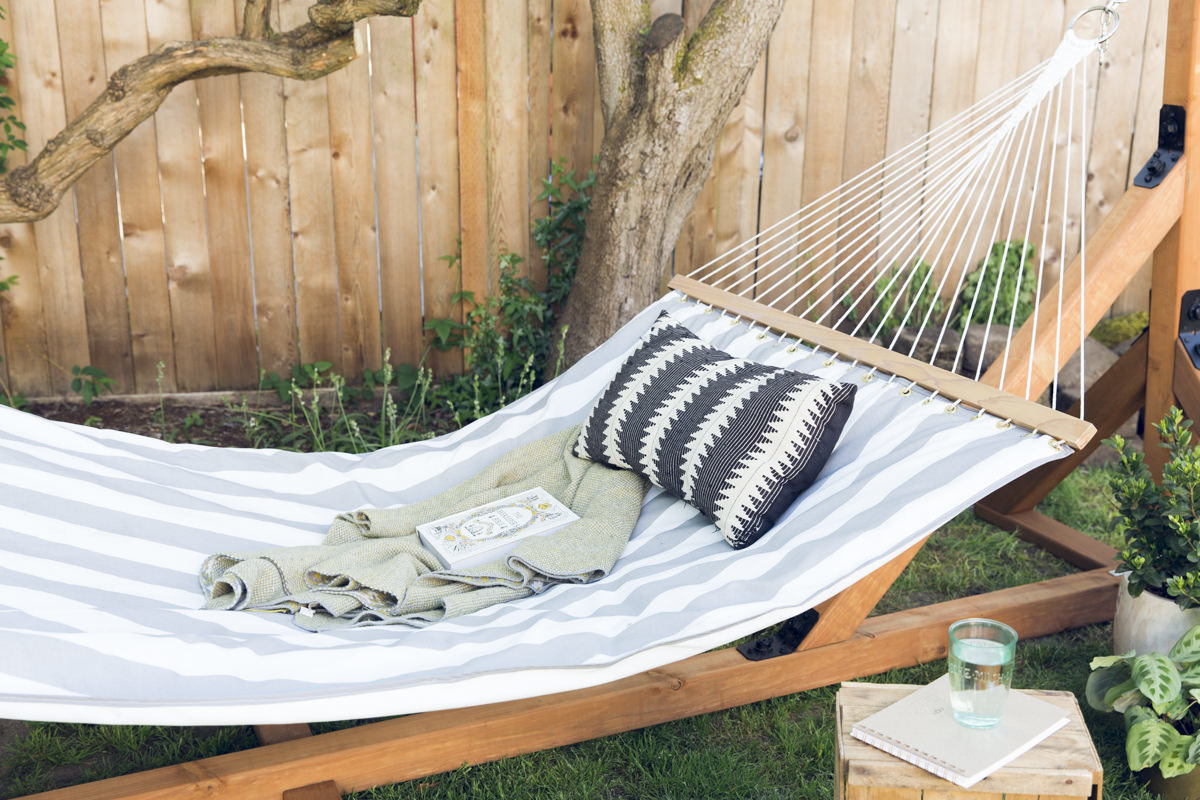 The four-by-four pressure-treated crossbeam that rests on the ground and connects the two posts is 12’ long. That worked for us, but remember that hammocks stretch out over time. We added a chain to adjust the height as this happens, but if you want to be extra cautious, you can extend the base beam. If you do this, know that Dunn Lumber doesn’t carry a non-incised pressure-treated board longer than 12’, so you’ll either have mismatched lumber or need to switch up your lumber choice from the start. Just a heads up. And if your car isn't big enough to carry that length of lumber, remember Dunn Dumber delivers locally for just $60!

Bracket-wise, it’s totally a matter of appearance. I picked the OZCO brackets because I love the way they look. They give an architectural appeal to your project, and the galvanized steel is powder-coated black so they're durable and attractive. (You can special order these through Dunn Lumber.) Another great option is the Simpson bracket, which is a little less expensive. If you want to go with the more affordable option while improving the appearance, you can always give it a coat or two of spray paint.

One final material-related note: with a lot of DIY projects, if something calls for a 3” screw, you can get away with using a 2 1/2" screw. This is not one of those projects! Each dimension and material choice is important for keeping this thing secure, and nothing should be scrimped on.

Start by cutting your materials. It's easiest to use a miter saw for the angled four-by-four cuts, but in a pinch you can also use a hand saw or take a second pass with the circular saw. Remember: measure twice, cut once.

Applying an end cut solution isn’t just for looks—it’s to maintain the integrity of the treated lumber. Apply according to the can, and don’t worry if the end cut solution bleeds down the sides of the lumber. I did worry, and desperately tried to stop it from happening, only to find out it fades away after a month in the sun anyway. (A good reminder to read the label thoroughly before using a product.) Use a sanding sponge to smooth out any rough edges as you go. This will be outside, so you can skip this step if you’d like. 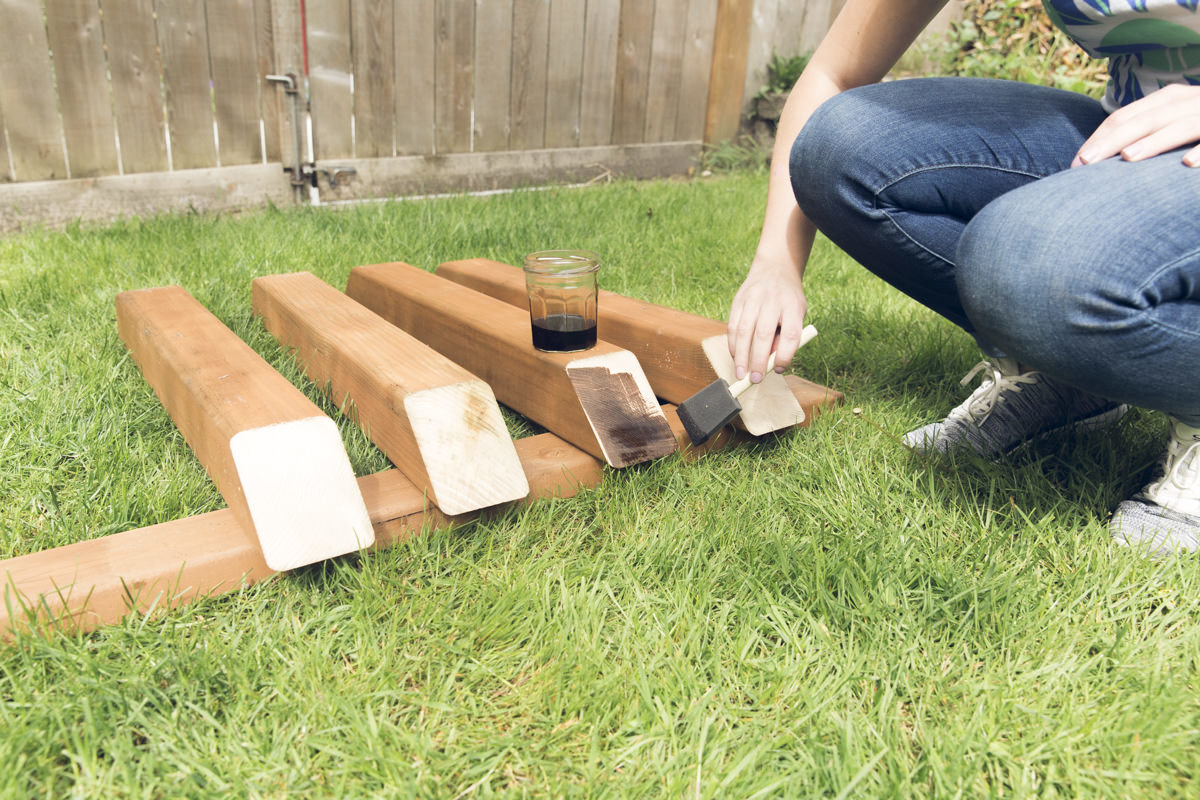 This type of lumber is shipped to Dunn Lumber locations and stored outside. To protect it from the weather, it's covered with plastic sheathing which is sometimes stapled in place. You may find some staples in your lumber regardless of where you buy it. Remove any staples with a pair of pliers. 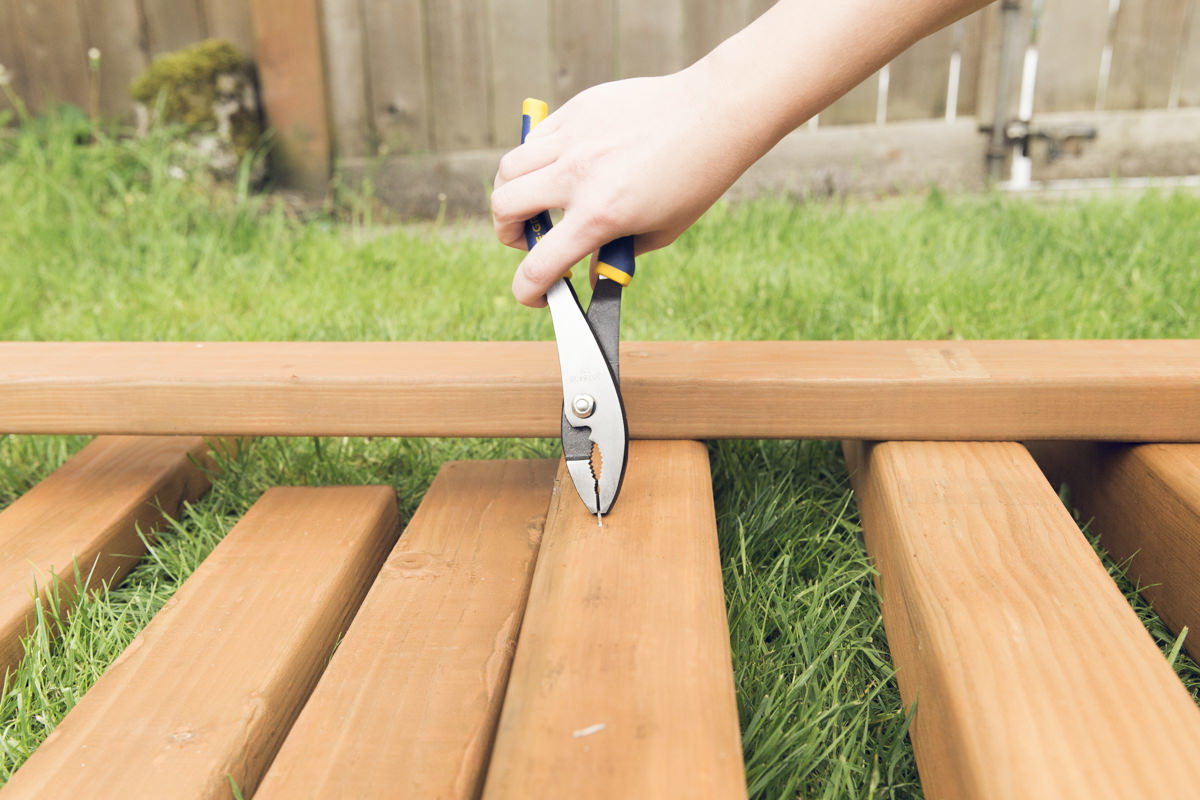 We’re starting with the “feet” of the hammock stand. These lay flat on the ground at the base of the posts, perpendicular to the crossbeam. 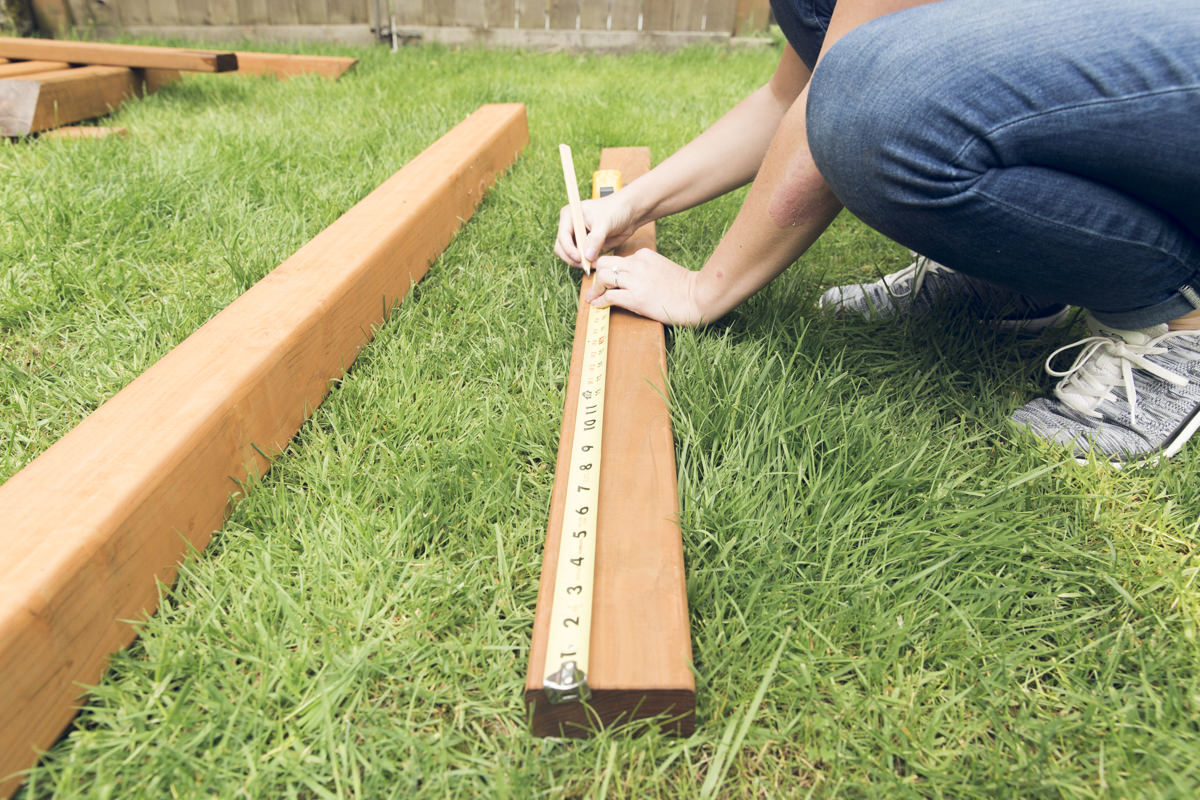 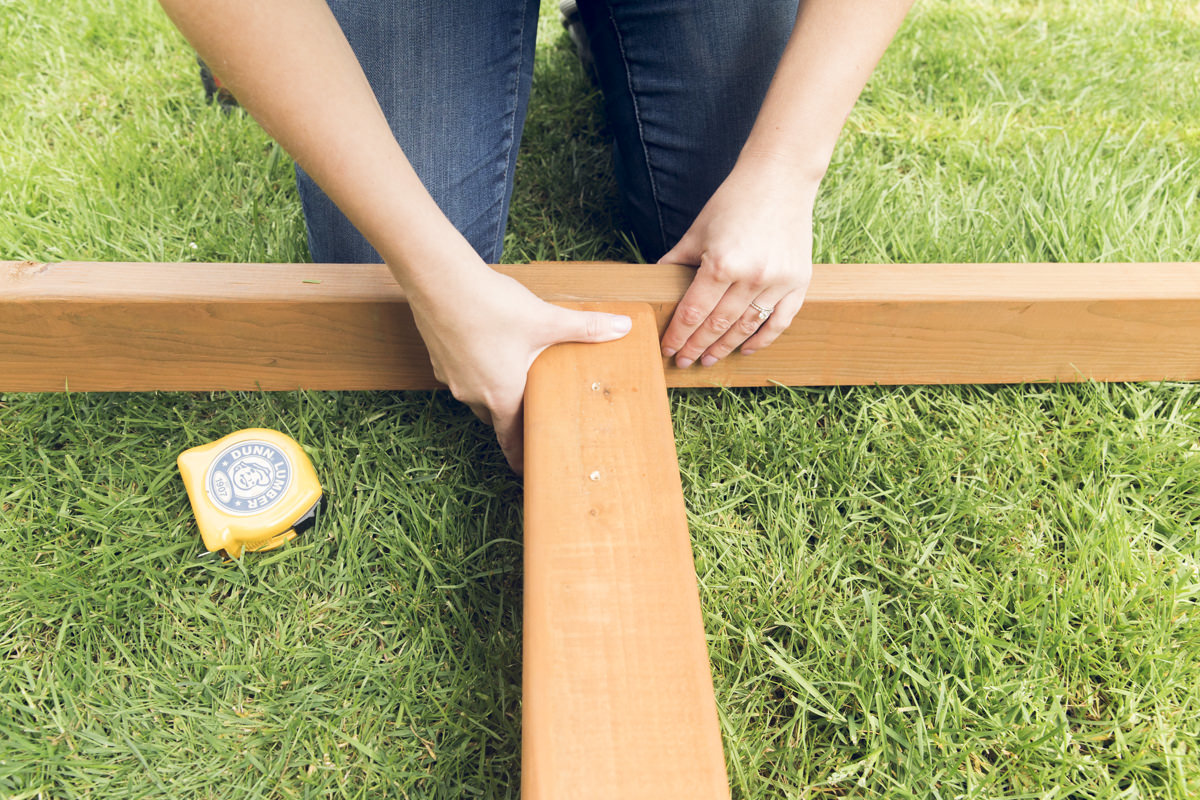 First, attach the tie plate to the foot with 2” screws. We used a pretty large metal tie plate, and yes, you really do want something that big and that sturdy (we learned the hard way).

Then, with an extra set of hands, have a friend hold the 12’ four-by-four crossbeam in place while you secure the foot to the four-by-four with 2” screws. If you’re working solo, you can prop the four-by-four up on something, but it’s best to have a buddy.

For added support, we also attached an “L” bracket in between the post and the crossbeam.

Repeat on the opposite end. 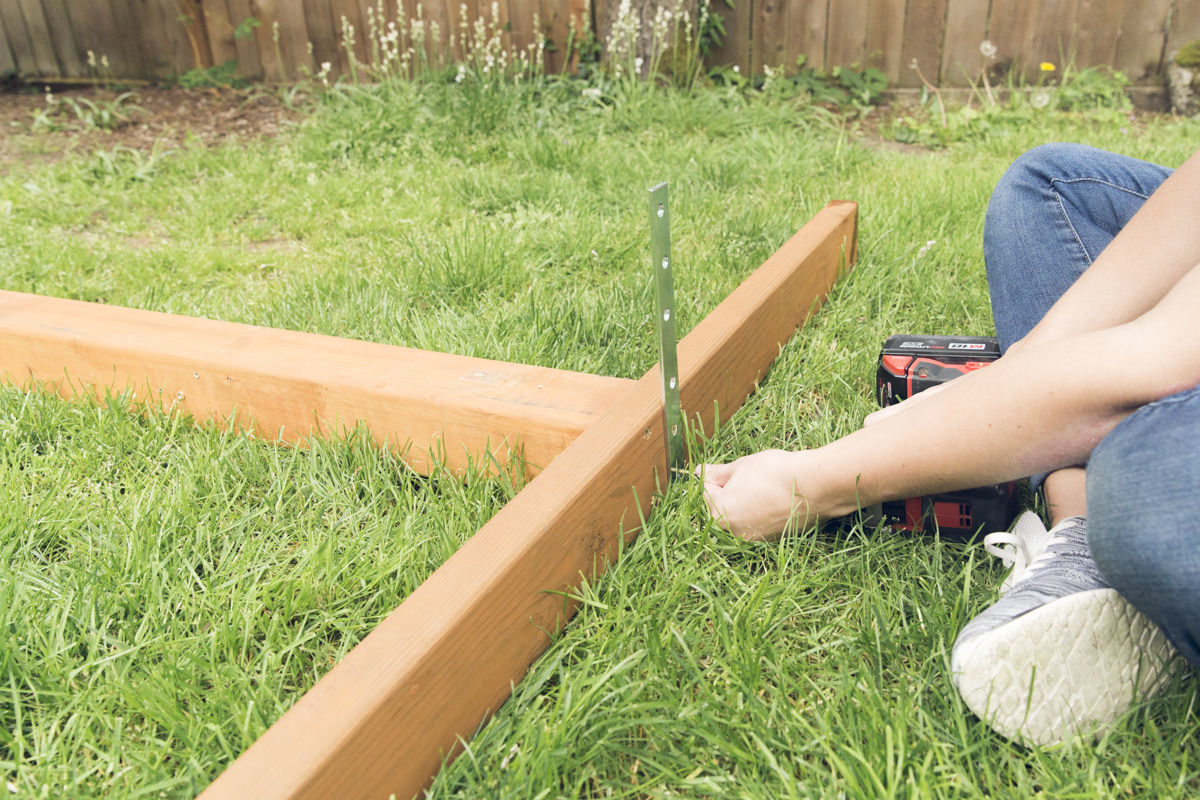 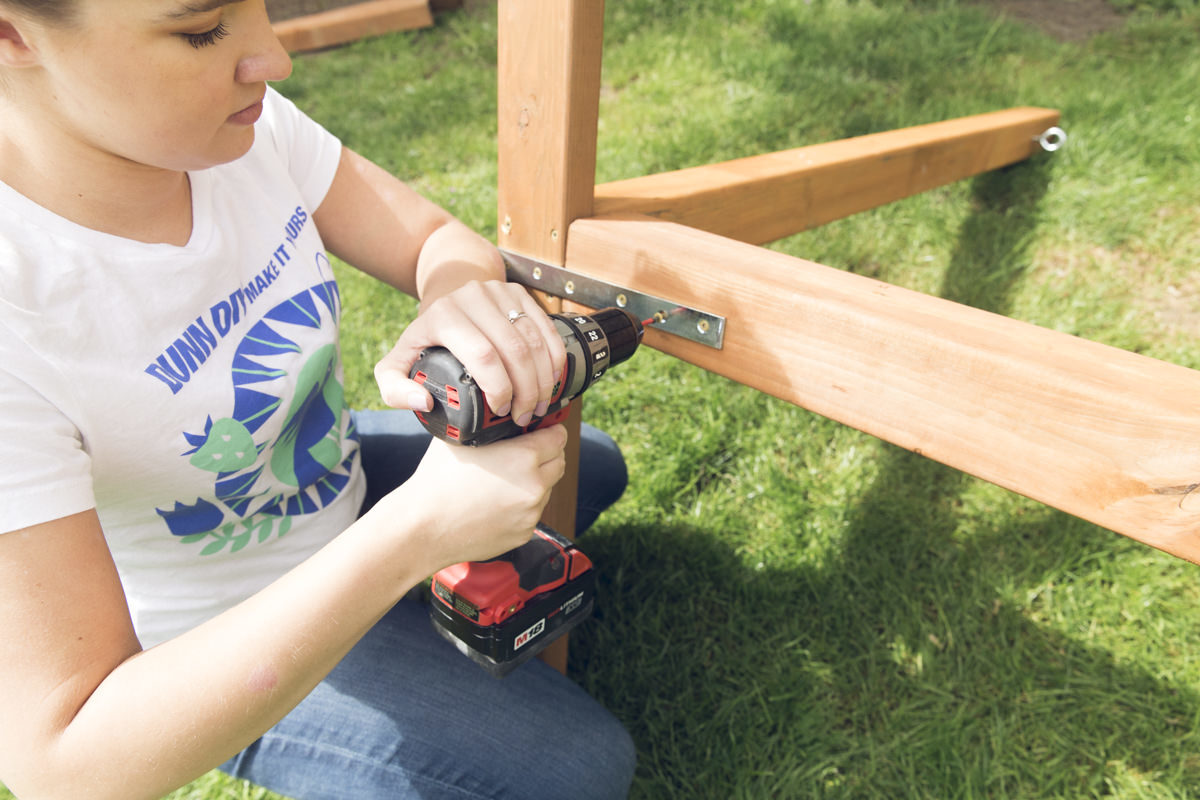 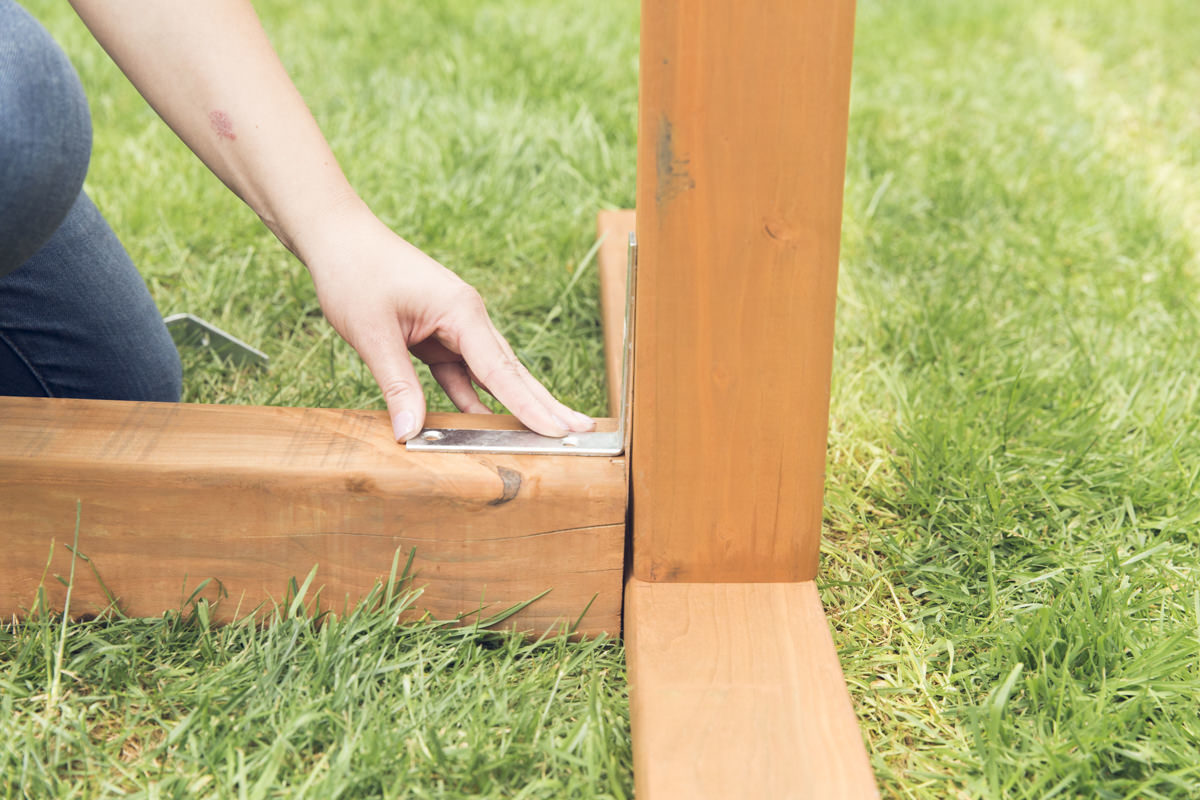 For even more support, we’re adding an additional “foot” in the middle of the crossbeam.

Just like we did before, attach tie plates to the ends of the two remaining two-by-four pieces. They’ll fit on either side of the crossbeam to essentially create one longer piece, so make sure you attach the tie plates to opposite sides so they don't run into each other.. 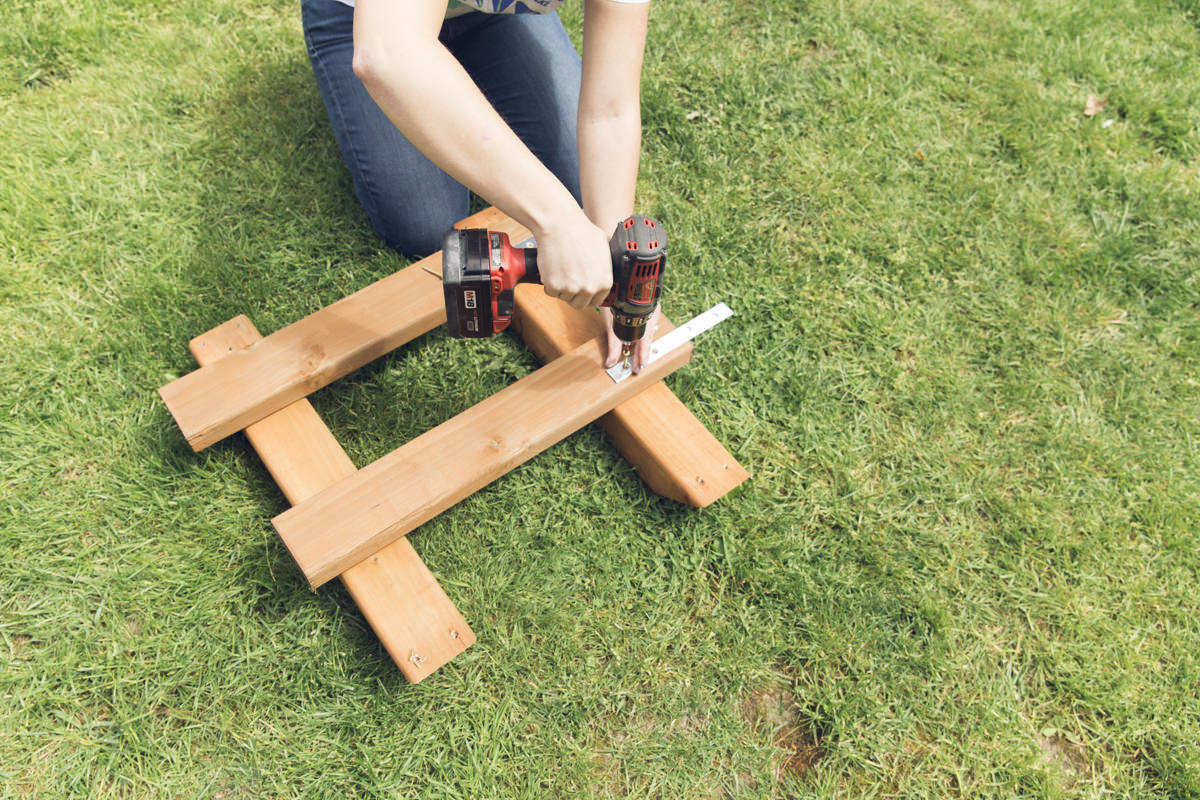 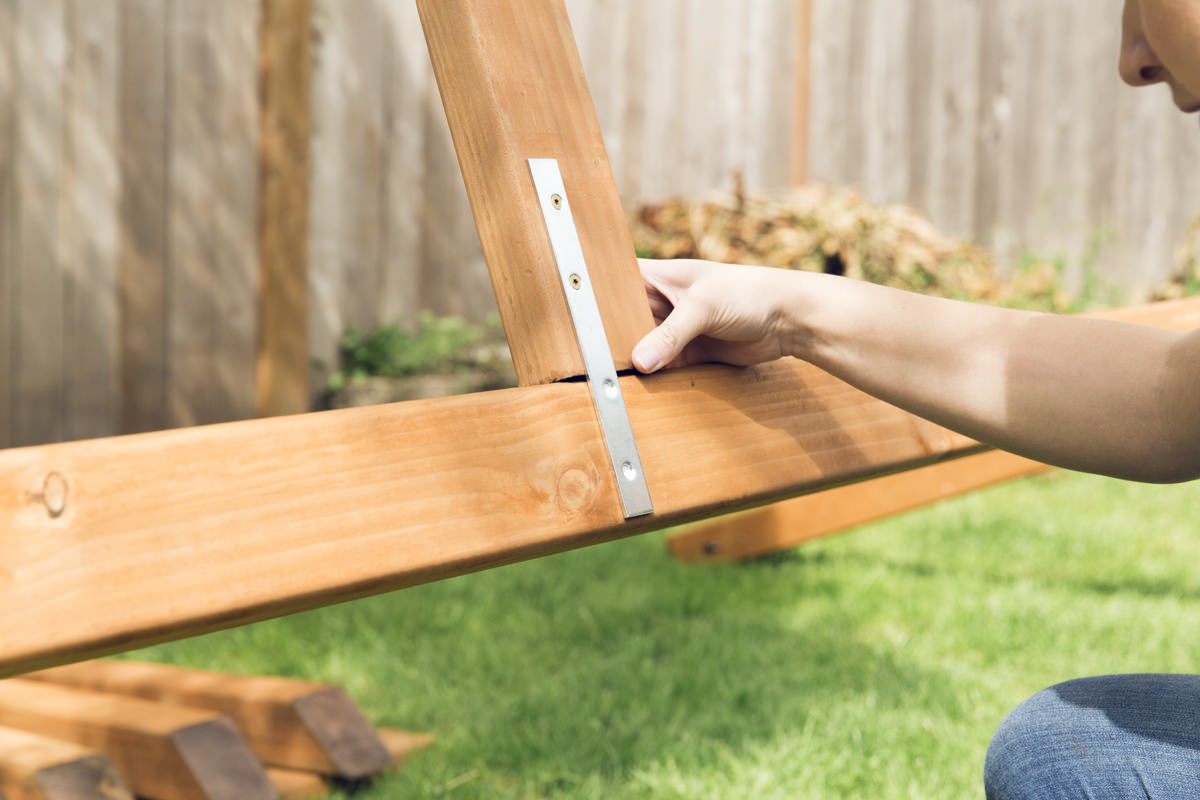 To give the posts some stability, we’re adding a 49”-long four-by-four diagonal brace that’ll attach to both the post and the crossbeam.

Because the diagonal brace piece is cut at a 45° angle, it’ll fit perfectly—in theory. Situate the piece until it’s flat against both the post and the crossbeam, or until it's as flat as you can get it. If it's not perfect, don't fret. It’s a bit heavy and awkward, so grab a friend to help you with this part if you can. Pre-drill holes, then secure the diagonal piece in place with the OZCO angled brackets. Repeat on the other side.

Now that we’ve added two long braces to support the posts and the crossbeam, we’re adding four smaller 31 1/4" four-by-four braces to support the posts and the feet. Each one will fit into place just like the longer ones did. To attach them to the post and the feet, use a bracket at the top and two 2” screws toe-nailed in at the bottom. (Toe-nailed just means the nails are going in at an angle.) When you’re finished, you should have two short braces on each end.

The hammock will hang from eye bolts. To add these, measure 6 3/4” down from the top of the posts and make a mark at the center. Drill all the way through with a 3/8" drill bit. On the outside of the posts, drill back through with a 1” spade bit, creating a shallow hole. This will create a pocket for the end of the bolt. For the best life, you'll want to protect this exposed wood with end-cut solution as well. Push the eye bolt through the hole. Once it pops through on the other end, attach a flat washer on the backside and screw on the nut.

I added post caps for a finished look. I also added Decorator’s solar-powered post lights for some nighttime ambiance. The lights have little plastic hangers on the back; the top of the hanger should be centered 3 1/4" from the top of the post. The post caps just rest on the top of the post; you can use glue or nails to secure them if you’d like.

The moral of this story is that it always, always pays to build a prototype when you're designing something complex. I tried skipping a step and it cost a lot of time and effort in the design process and resulted in several rebuilds. But thankfully, it ended with a dialed-in design that you can easily complete in a few hours.

At this point, the only thing I have energy for is dragging the hammock stand into the sun for maximum relaxation time. Enjoy! 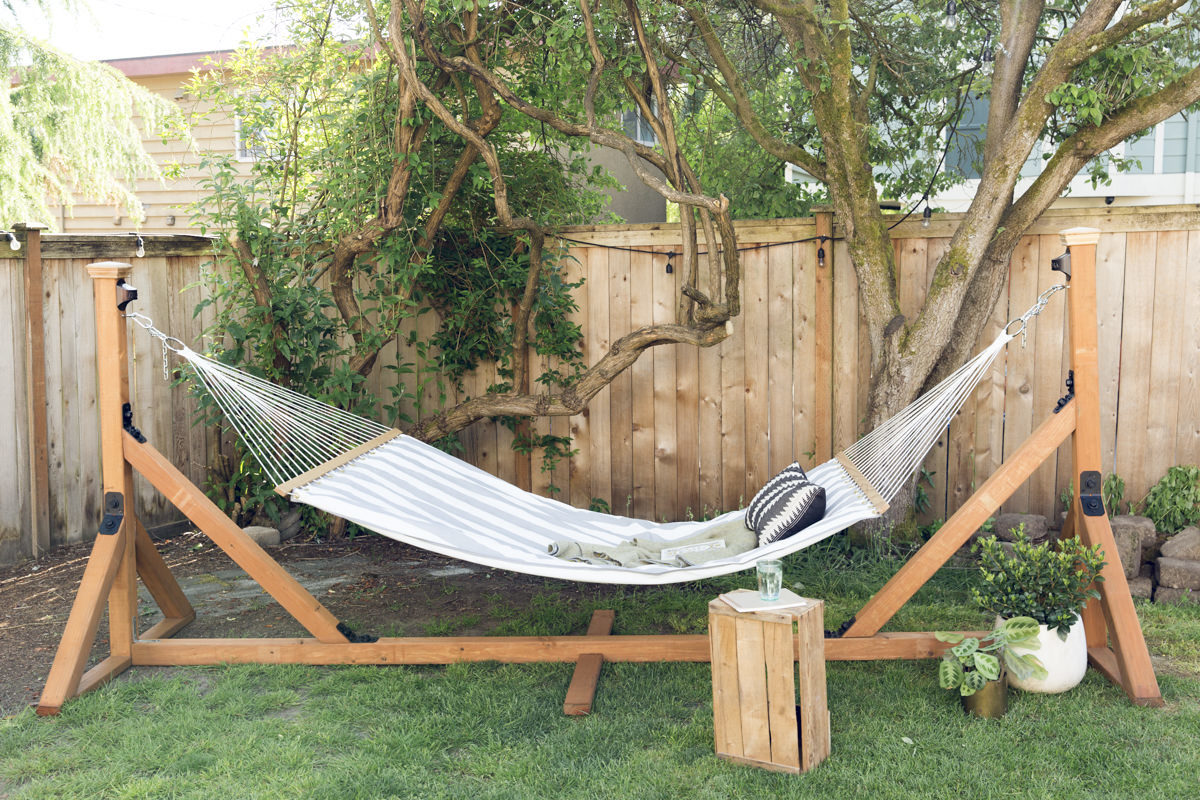 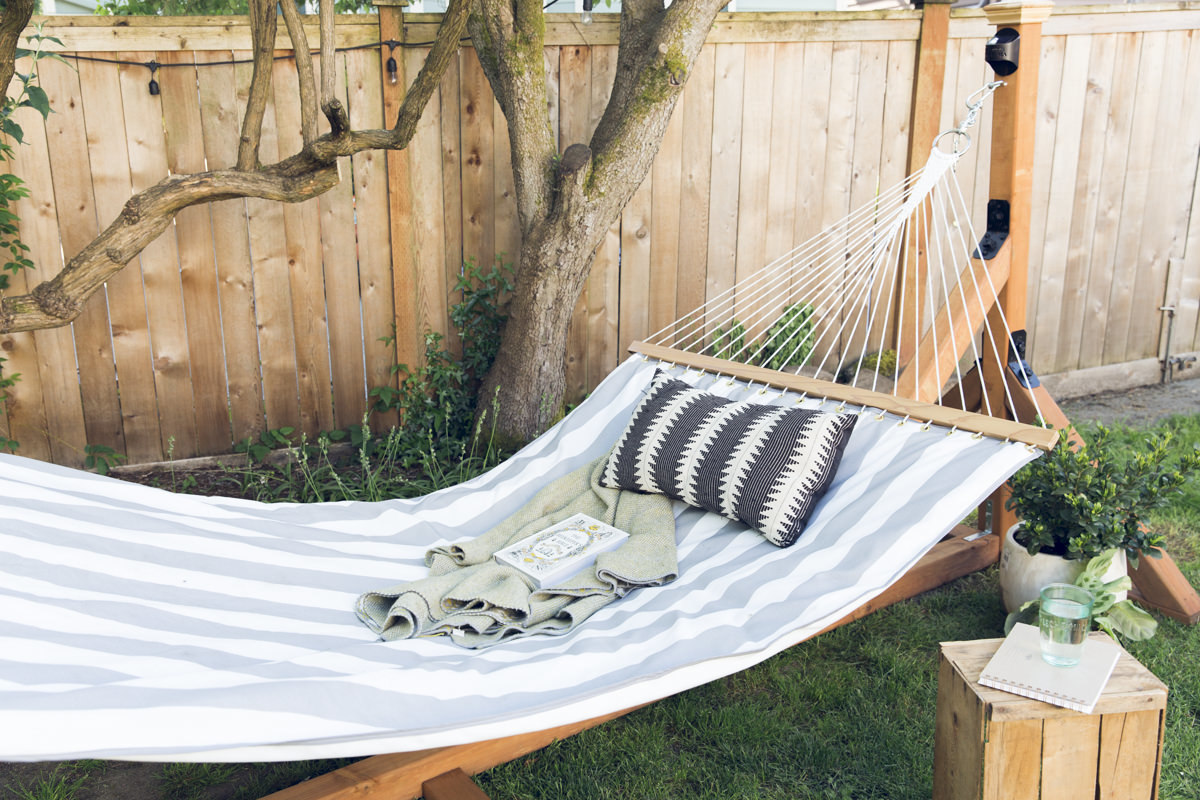 How To Build a Simple Headboard

Here's a simple headboard you can customize to fit a single, double, queen, or king mattress. It's easy to make and adds a great accent to any bedroom.

Do you remember when we built a kid's tent a couple summers ago? Check out this post if you don't —it's a great rainy day project! We decided to take the concept of this tent and turn it into a cold frame, just in time for spring.

Every so often we're fortunate enough to partner with local initiatives. Advent Lutheran Church in Mill Creek grows produce for a local food kitchen. Seeing how we're in the lumber business, we saw it as an opportunity to help build the planter boxes!