Kubb is a lesser-known lawn game that’s gaining popularity in which players throw wooden batons at wood blocks in order to knock the blocks over. Part of the appeal of kubb comes from its simplicity—it’s an easy game to understand and play—combined with the surprising challenge of mastering it.

The game involves four different wooden elements. There’s a “king” that stands in the middle of the field, dividing it between the two teams; 10 kubb blocks (five for each team) that are knocked down by the opposing team using wooden batons; six wooden batons used alternately by each team; and four wooden stakes used to mark the corners of the playing field. The goal is to knock down the opposing team’s blocks, then the king, before they do.

Before we get started, let’s address the elephant in the room: How do you say "kubb?" To be honest, I don't really know. The arguments about it on the internet are heated and completely mixed. Although there’s no evidence of this, kubb has been rumored to have its roots in Scandinavian history—and if there’s one thing I learned from the summer my mom spent in Norway with her Norwegian-speaking grandparents, it’s this: the “oo” sound in Scandinavian languages lies somewhere between the vowel sounds in “doom” and “dunk.” In other words, it’s not “koob,” and it’s not “kub”—it’s somewhere in between, a vowel sound we don’t use in English. So pick your favorite way of saying it, because there’s no scenario in which everyone will agree with you. Now, let’s get to the tutorial.

For the batons, we’re using 1 5/16” round hemlock moulding. Cut the moulding into six 11 7/8” lengths. This specific length (slightly shorter than 12") allows us to get six pieces out of six feet of moulding, but feel free to change the dimensions to 12" depending on the moulding you’re using. Mark the lengths with a pencil, line up your markings using a miter box, and clamp in place. Cut with a hand saw.

Alternately, you can make these cuts with a chop saw or a circular saw.

Now it’s time to make the blocks to be knocked down. Regulation kubb blocks are 2” wide, but we’re sacrificing regulation for the sake of simplicity. Cut the four-by-four into ten 6” lengths, using clamps and a hand saw (the four-by-four is too thick for the miter box).

The larger diameter will make these blocks harder to knock down, so we used cedar (a light density wood) for the blocks and hemlock (a heavier wood) for the throwing batons. This should help compensate for the discrepancy in size, without having to plane the lumber down to 2".

You can also use the method we came up with for the knights in our DIY outdoor chess set.

Now it’s time to sand all of the pieces: the batons, the blocks, the king, and the corner markers (the lawn stakes). This is an outdoor game that involves a fair amount of impact, so you don’t need to be too thorough with your sanding since the pieces will get beat up as you play. That said, since you’ll be handling the batons, take special care to remove any splinters—I've found hemlock is especially prone to splinters if it’s not sanded.

The wooden stakes are pretty rough, too, because they’re not designed for this kind of use. I took a sander to them to smooth out the top part and make sure no one ends up with a sliver in their hand.

The last piece of the game involves adding string to the corner markers so you can easily measure out the playing field. First, drill a hole about halfway down one stake with a drill bit large enough for the string you’re using. Thread the string through the hole (you can use the drill bit to encourage the thread to go through), and tie it in a knot.

Next, we’ll measure out the lengths of each of the four sides of the kubb field and tie knots to mark the measurements. First, measure out 16’ of string and tie a knot. From that knot, measure out 13’ and tie another knot, then another 13’ and another knot. Repeat this pattern, measuring and tying knots at another 16’, 13’, and 13’. When you set up your game, use these knots as the measures to place your stakes. The short sides of the playing field should measure 16’, and the long sides should measure 26’. The knots in the middle of the 26’ sides indicate where you should place your king (in the center of the field).

When you’re done, cut the string and wrap it around the first stake for storage.

Alternatively, you can drill holes in all of the stakes and thread them onto the measuring string, tying knots on both sides of the stakes to keep them in place. If you go this route, make sure you make your measurements from the knot on the outside of the stake to ensure your playing field is the proper size.

You can leave the pieces as they are, stain them, paint them, and/or finish them with a clear protective coating. We took inspiration from croquet and painted on some simple stripes in black and white with acrylic paint. Half of the Kubb blocks were painted with a white stripe, and half were painted with a black. Because all of the batons will thrown by each team in turn (rather than each team throwing half) we made the batons team neutral by painting a white and a black stripe on both. To avoid the pain of measuring, we used varying widths of painter's tape to come up with the position and width of the stripes. Then, once the paint was dry, we covered them with a spray-on polyurethane finish. 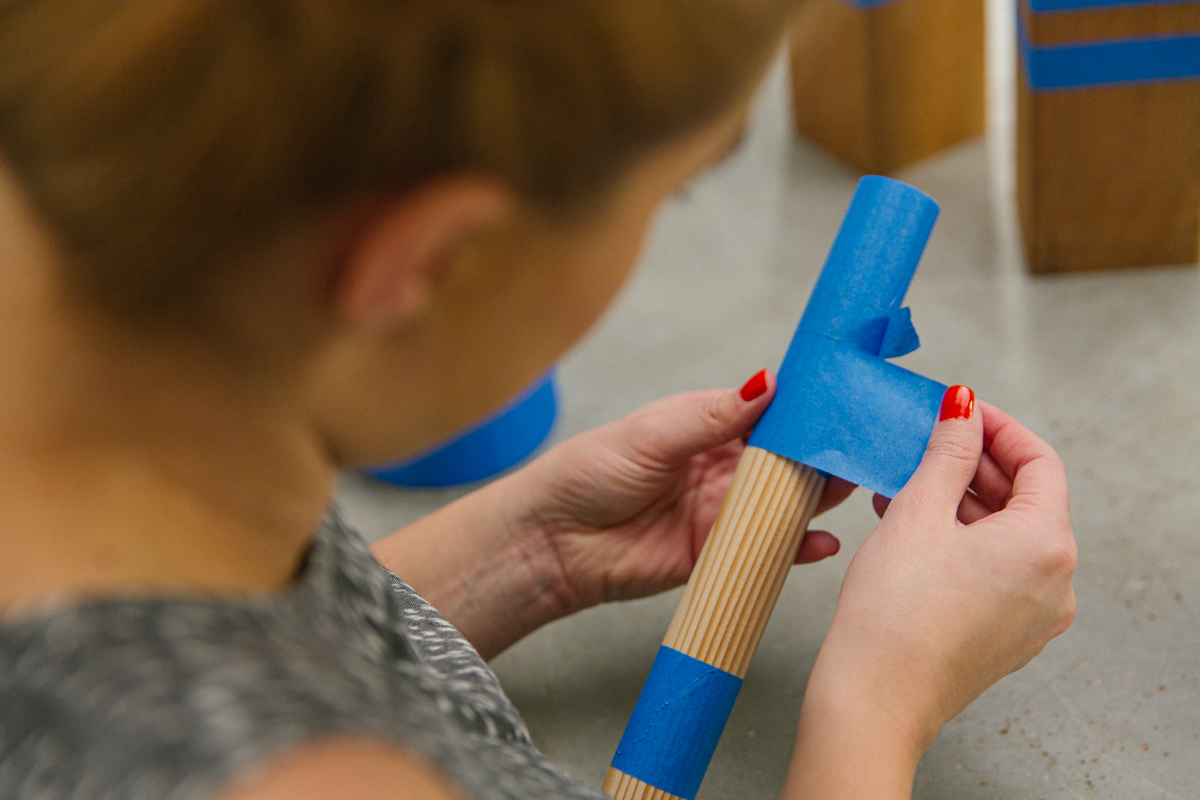 Now you’re all ready to play kubb! We hope you enjoy learning how to play this game as much as we did. For more DIY lawn games, check out our tutorials on how to make a Plinko game board, a cornhole set, and outdoor Jenga.

How to Turn Coasters Into a Holiday Banner

Despite its slim size, this entryway hall tree makes space to stash all the necessities—keys, dog leashes, coats, hats, wallets, and the like.

Tools 101: How To Pick the Right Nail or Screw

In this episode of Tools 101, we’re covering the basics of nails and screws, and how to discern where and when to use each.