For as long as I can remember, my family's tree was always topped with the same gold star. There was even one year we procrastinated on putting up the ornaments and ended up never getting around to it, but even then we still had the lights on the tree and the star on top. My dad would always put the lights on the tree (because he was the best at it) and then he would secure the gold star on top. For some mysterious reason it seemed that my dad was only one in our family who could successfully top the tree with the star. Even if we tried doing it ourselves it always ended up with us calling in dad to fix it from being crooked.

For me, that star has always been the only tree topper. I've never liked another as much. I feel that way about so many holiday traditions with my family, and now being married and started my own traditions, there's some part of me that doesn't want to try to live up to those sweet childhood memories. It makes me want to go in a completely different direction so that instead of it feeling like an imitation of something past, instead it can be something fun and new that will make me think to future years and creating those memories for my children.

So instead of a traditional tree topper this year, I thought it’d be fun to try something new: a pom-pom tree topper, inspired by the candy-like colors of the season. And perfectly in sync with my personal color palette! 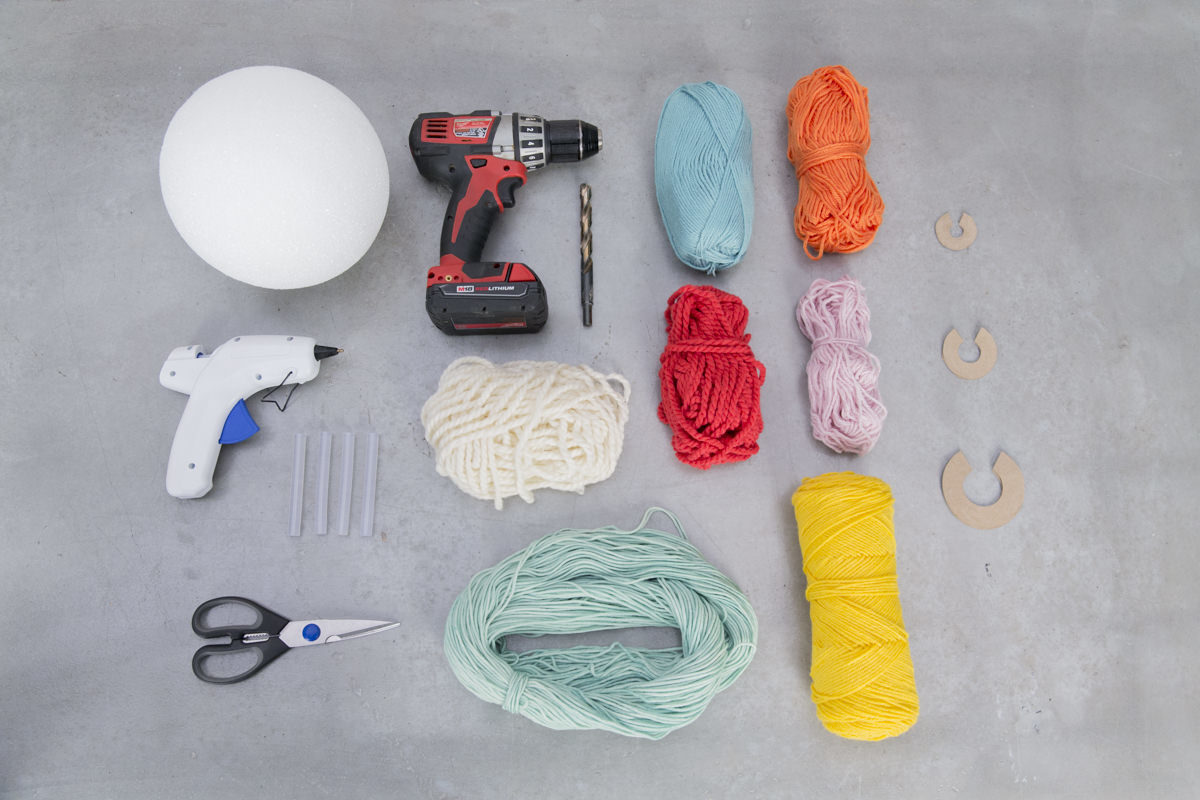 The first step to getting a perfectly fluffy pom-pom is choosing the right yarn. I found that cotton yarn tended to look a little sad and stringy, and the thinner the strand, the longer it took to make. So I chose a soft, medium-weight yarn, which gave the pom-pom a nice, full look. But this is DIY, so the choice is always yours—you can even vary the weights for an interesting contrast between pom-poms.

To make each pom-pom, first start by cutting a “C” shape out of cardboard to wrap the yarn around. You can print out the provided diagram as a guide, or you can play around with different sizes yourself—the outside circle determines the size of the pom-pom, and the inside circle determines the thickness and fluffiness. Cut two Cs of matching size, then stack them on top of each other—it should look like a donut with a bite taken out of it. 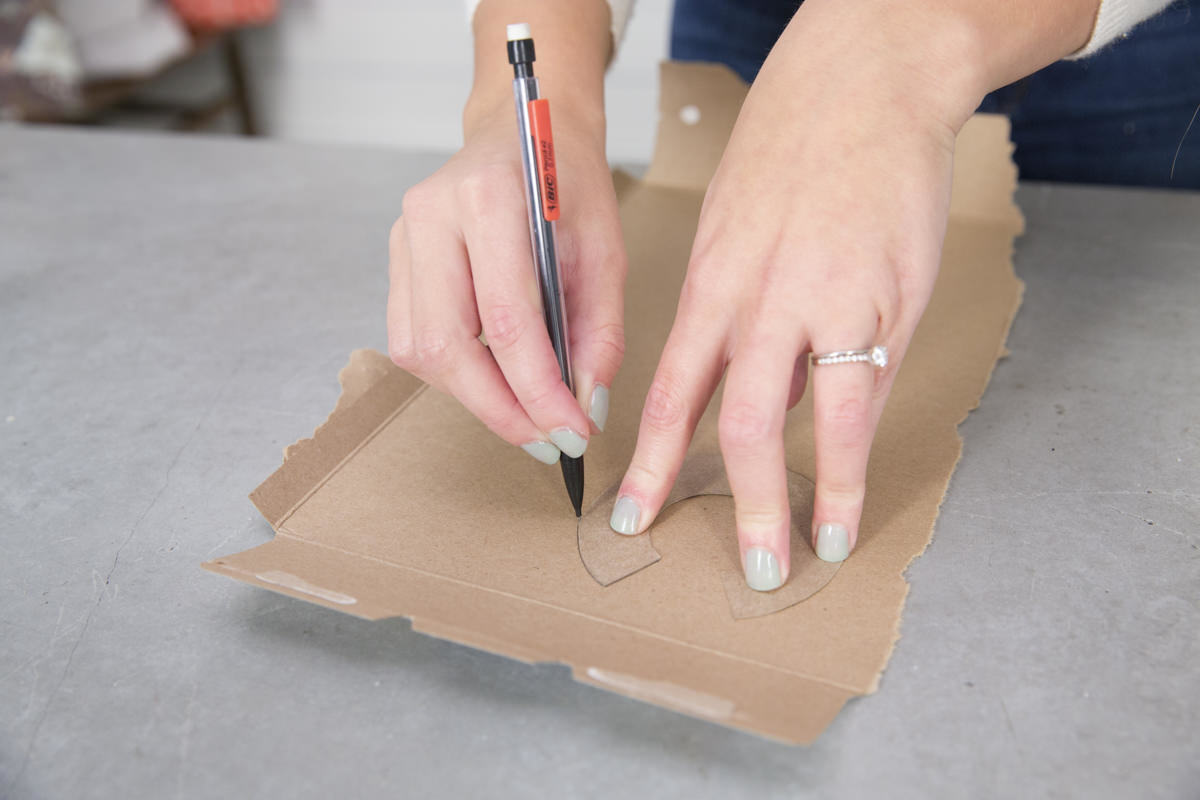 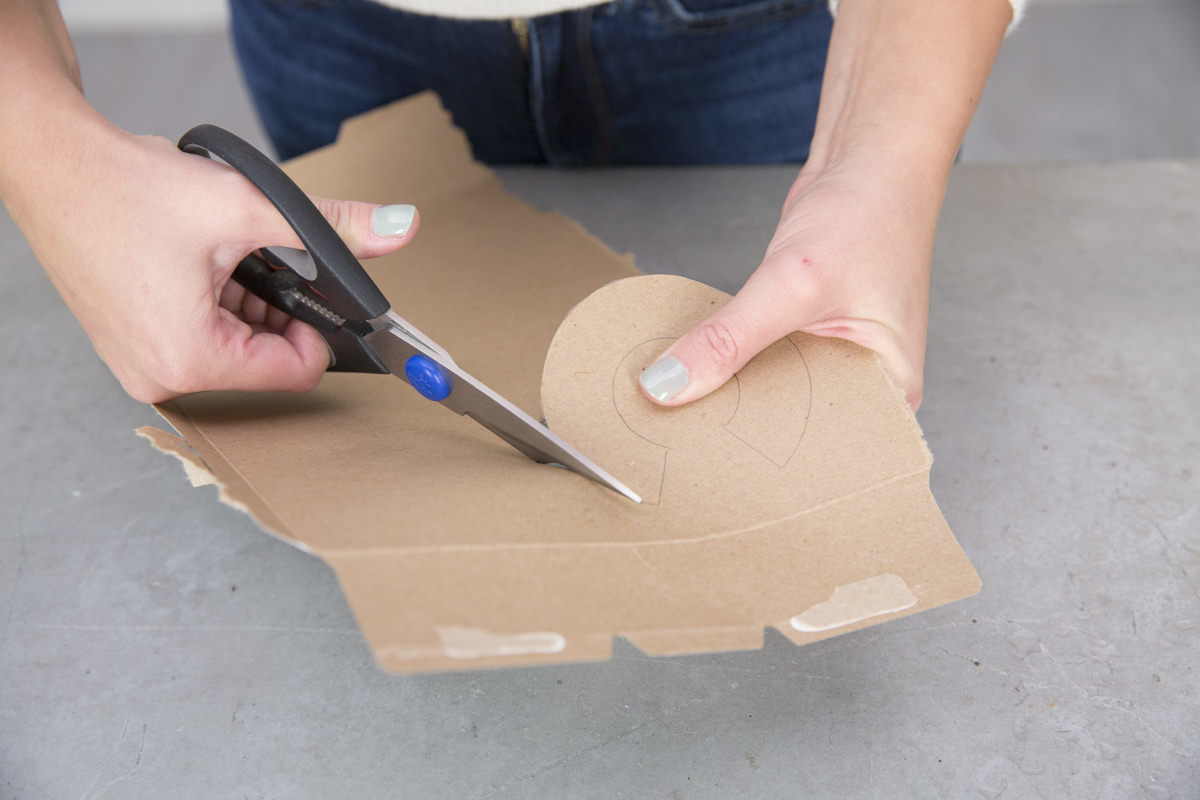 Start by cutting a length of yarn—this will form your pom-pom tail. We’re creating a tree topper, so the length doesn't need to be longer than a foot or so, but if you’re using the pom-poms for something else, you'll want to adjust it accordingly. Slip the length of yarn between the two cardboard Cs stacked on top of each other. The length of the yarn should follow the shape of the C, so that a little tail is sticking out from both ends.

Next, take the skein of yarn and wrap it around the cardboard—from one end of the C to the other (this will trap the "tail" between the two Cs). Wrap the yarn back and forth along the cardboard C until you run out of room in the center of the C. Don’t wrap too tightly, or you’ll make the next step more difficult. Once you’re done wrapping, cut the tail end attached to the skein. 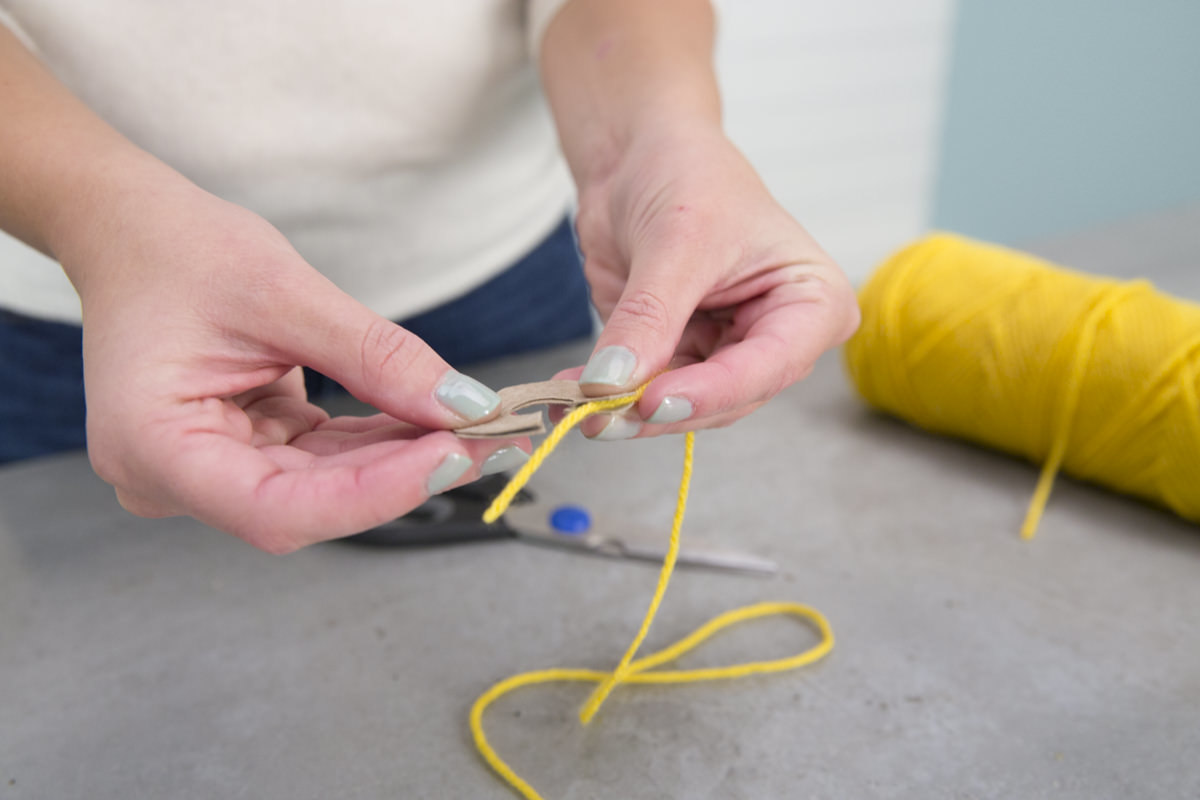 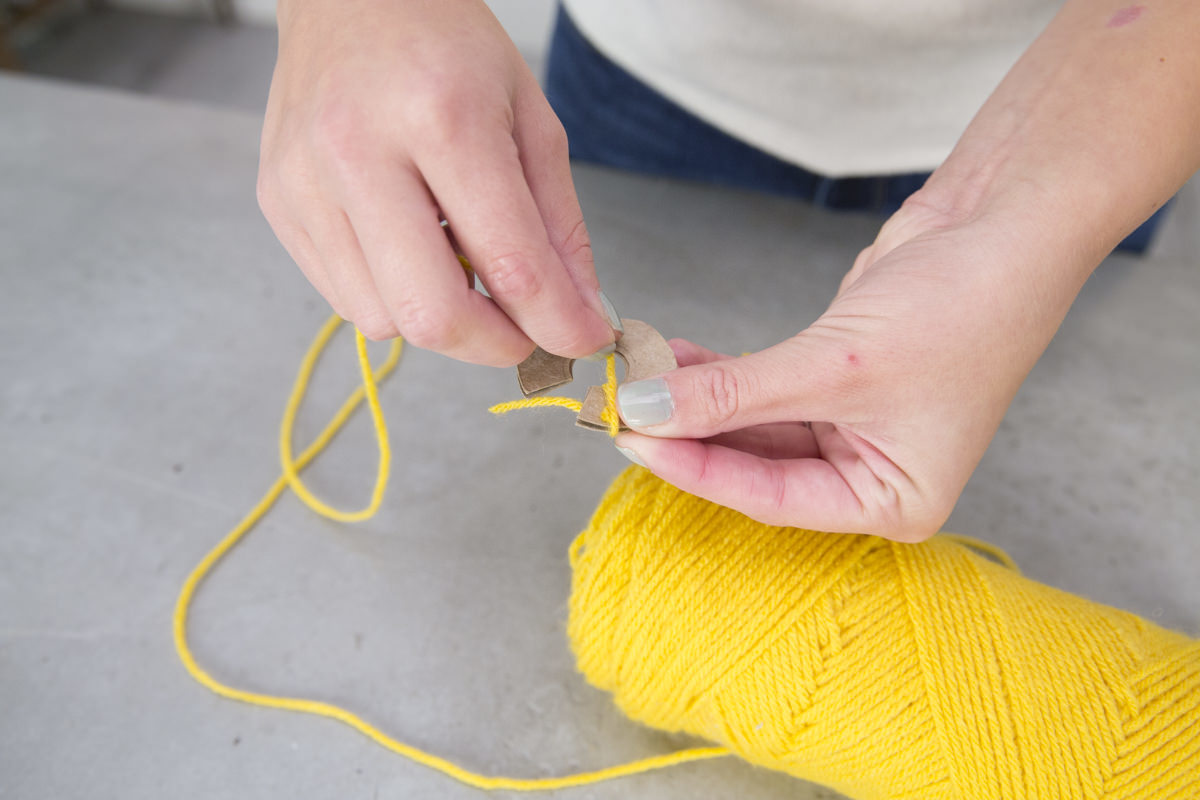 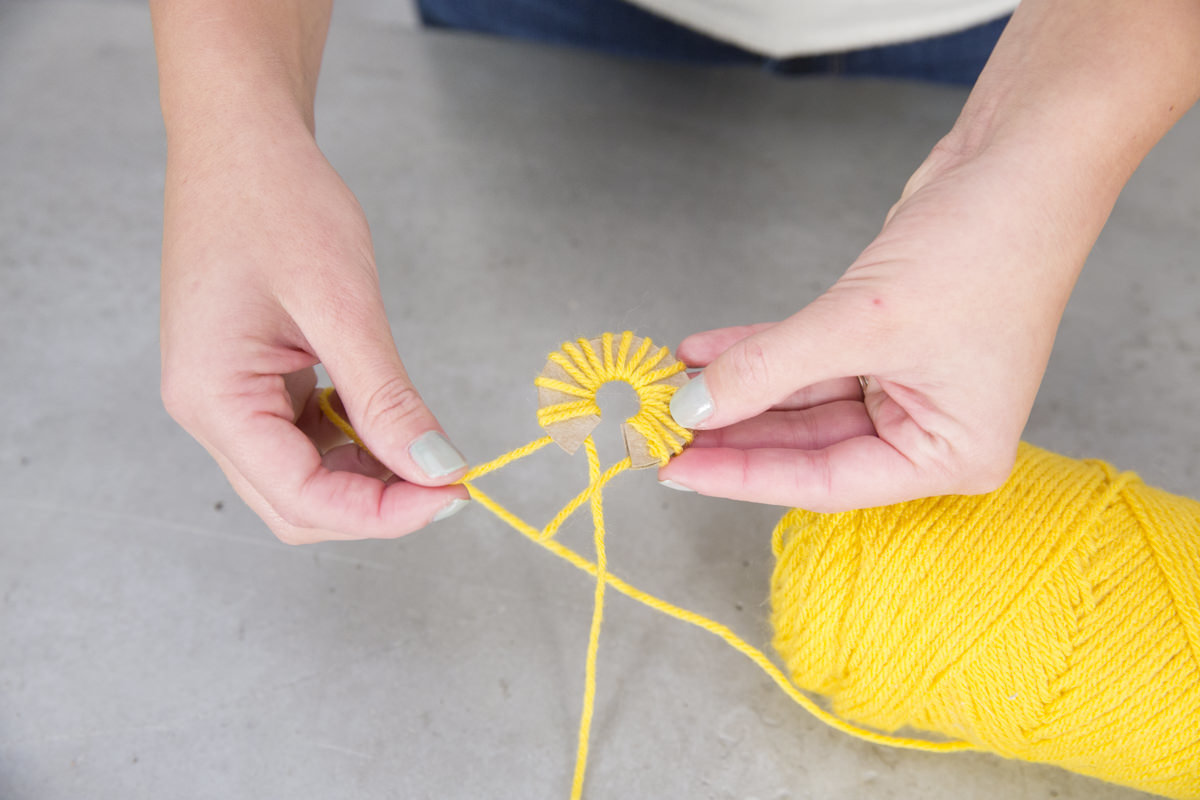 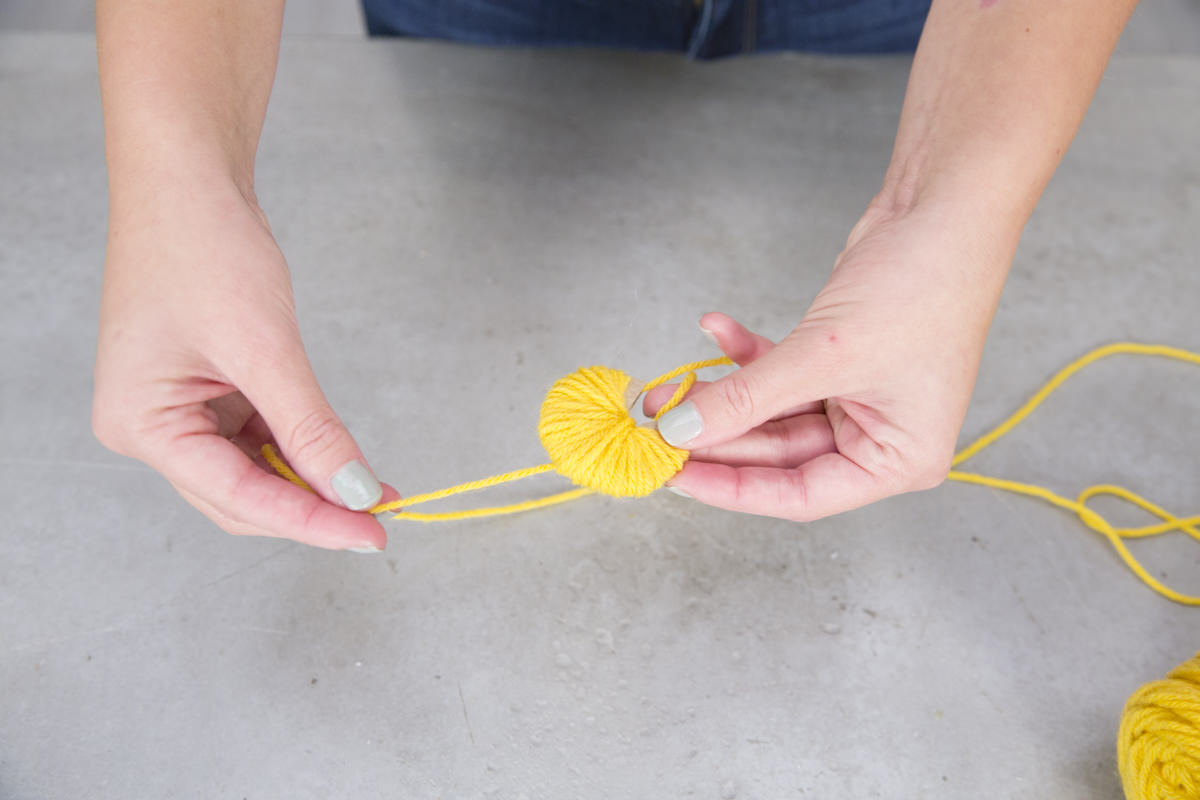 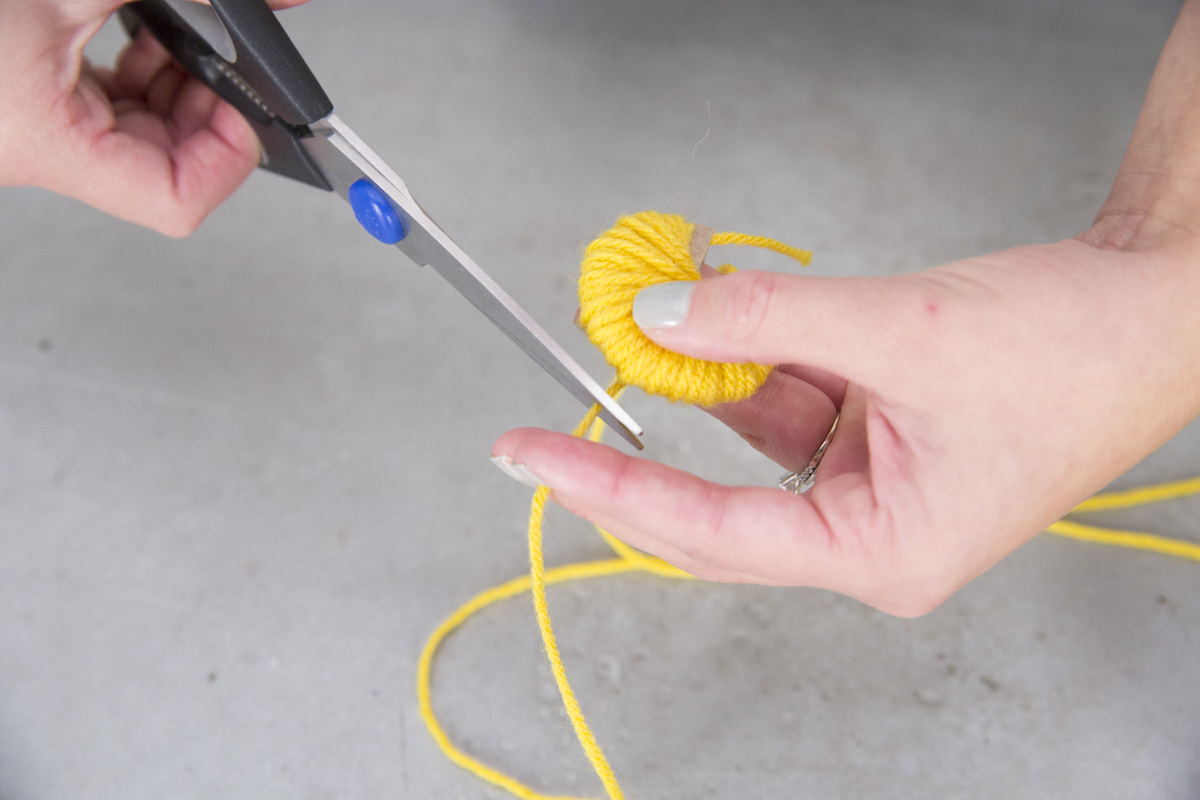 Pull together the two tails sticking out of the ends of the “C” and tie. Holding the tails in one hand, slip the scissors in between the two pieces of cardboard and cut the yarn where it wraps over the outside edges. Be careful not to cut the cardboard pieces (though sometimes this just seems unavoidable). Once all the yarn is cut, take the two tail ends and tie them into a knot as tight as possible.

If you’re having a problem with accidentally cutting the cardboard during this step, cut out new pieces of cardboard. Once you make one cut, it tends to get snagged and will keep getting in the way. Also, try wrapping your yarn a little looser—too tight of a wrap might cause the cardboard to bend over and get in the path of the scissors. 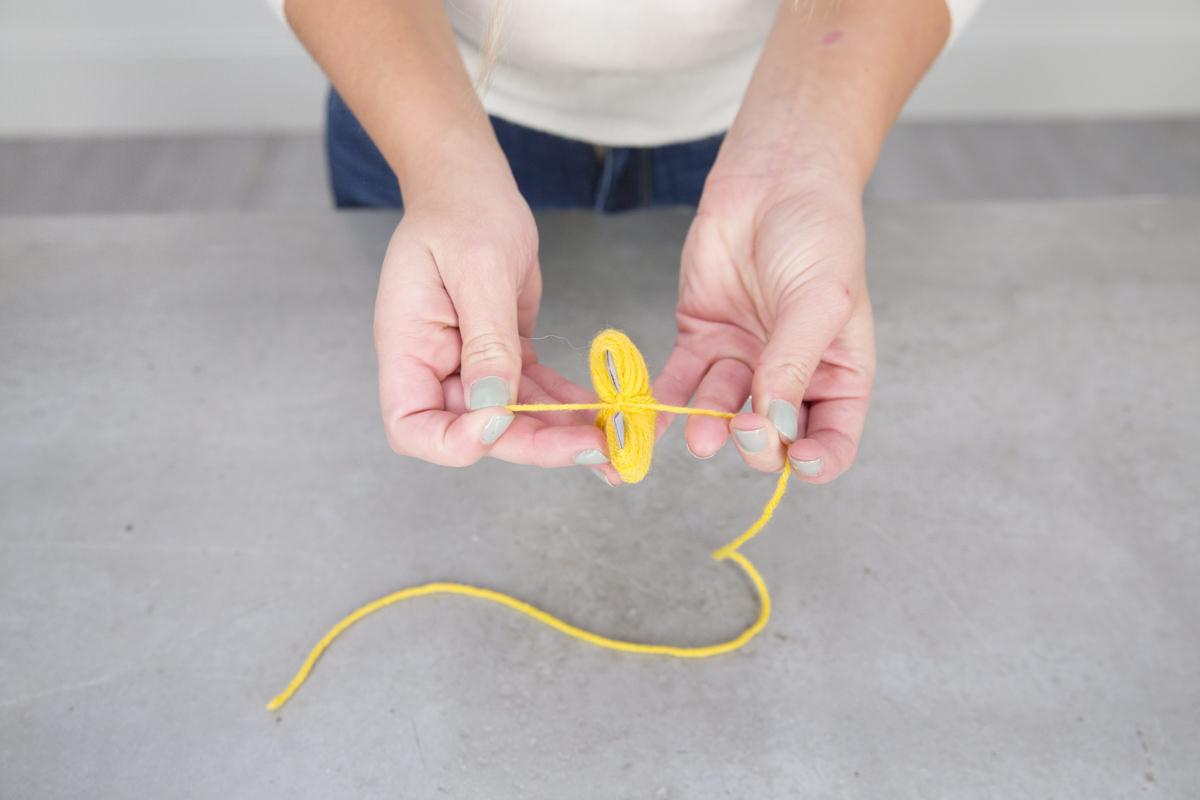 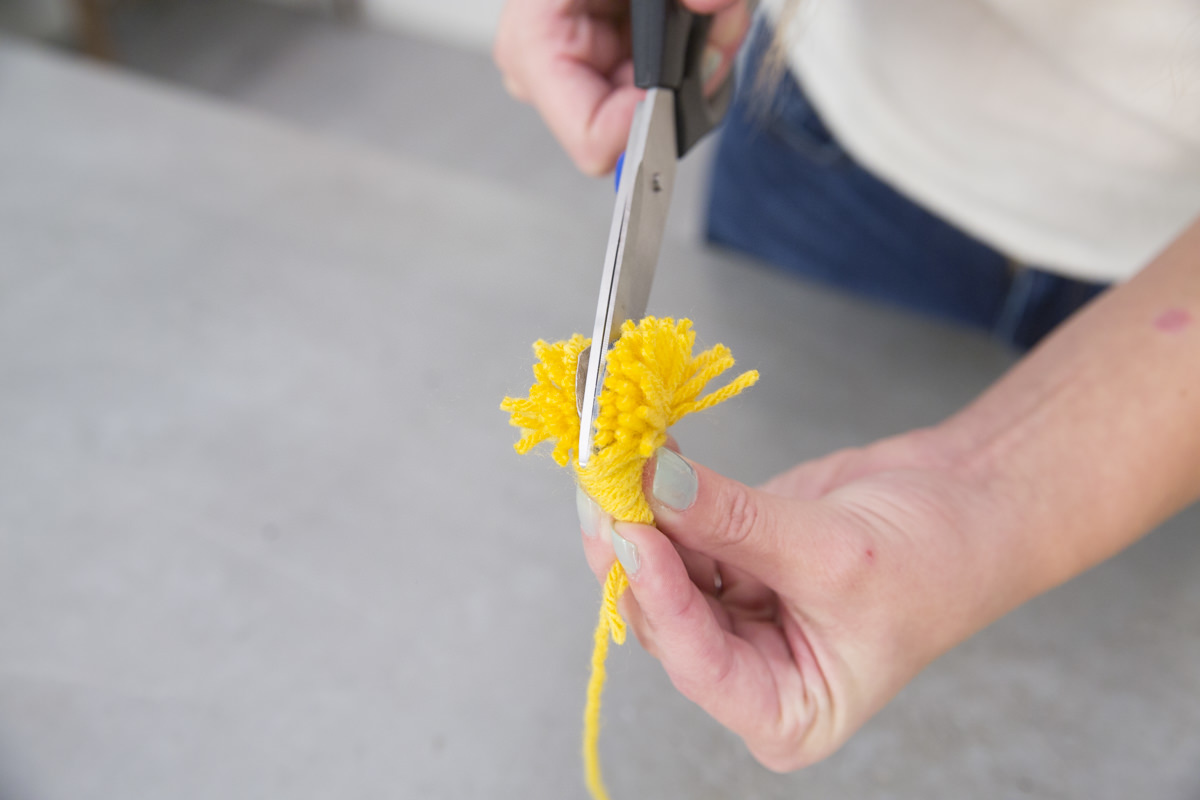 When your pom-pom has been cut and tied, there’s a good chance it’s still not going to look very pretty (even after making over fifty of these pom-poms I couldn't figure out why some turned out almost perfectly spherical and others turned out horribly lopsided).This is where shaping comes into play. Much like trimming a hedge or bush, you’ll need to use your scissors to trim your pom-pom into the perfect sphere. Cut in a circular motion and in different directions, turning the pom-pom around so that you’re looking from all different angles and not missing anything. 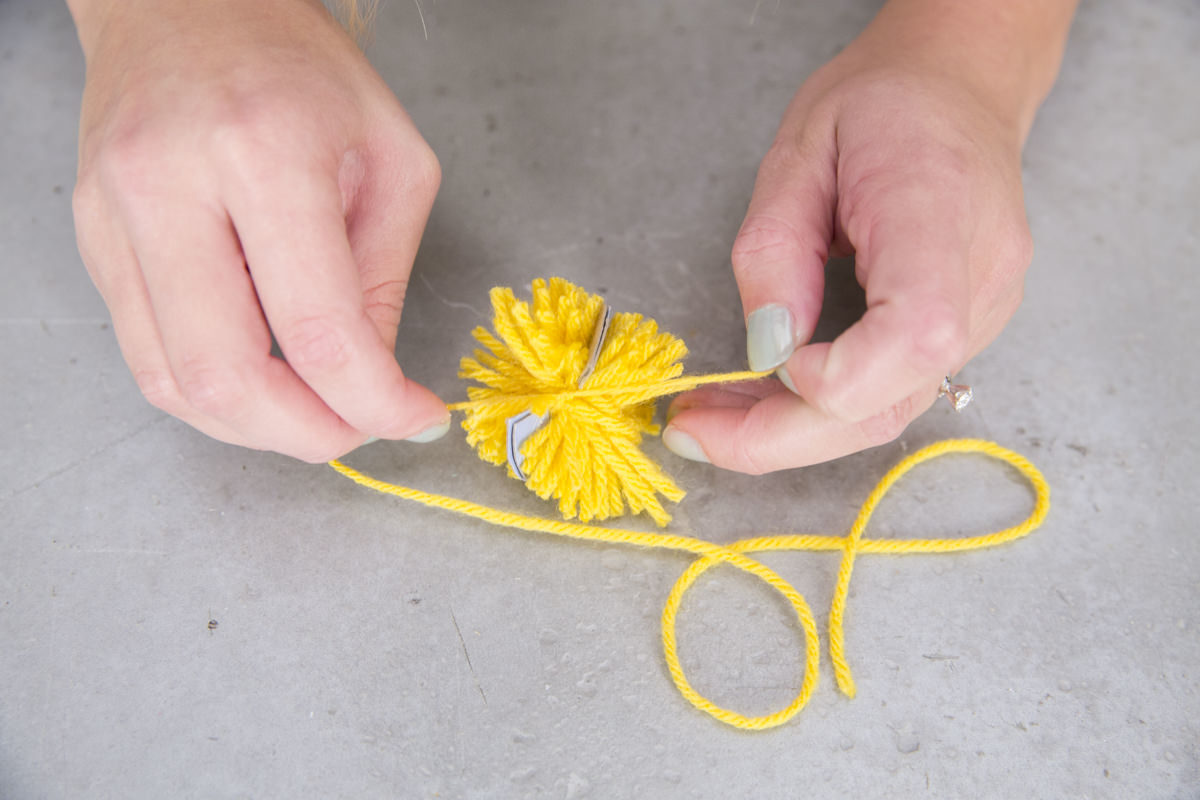 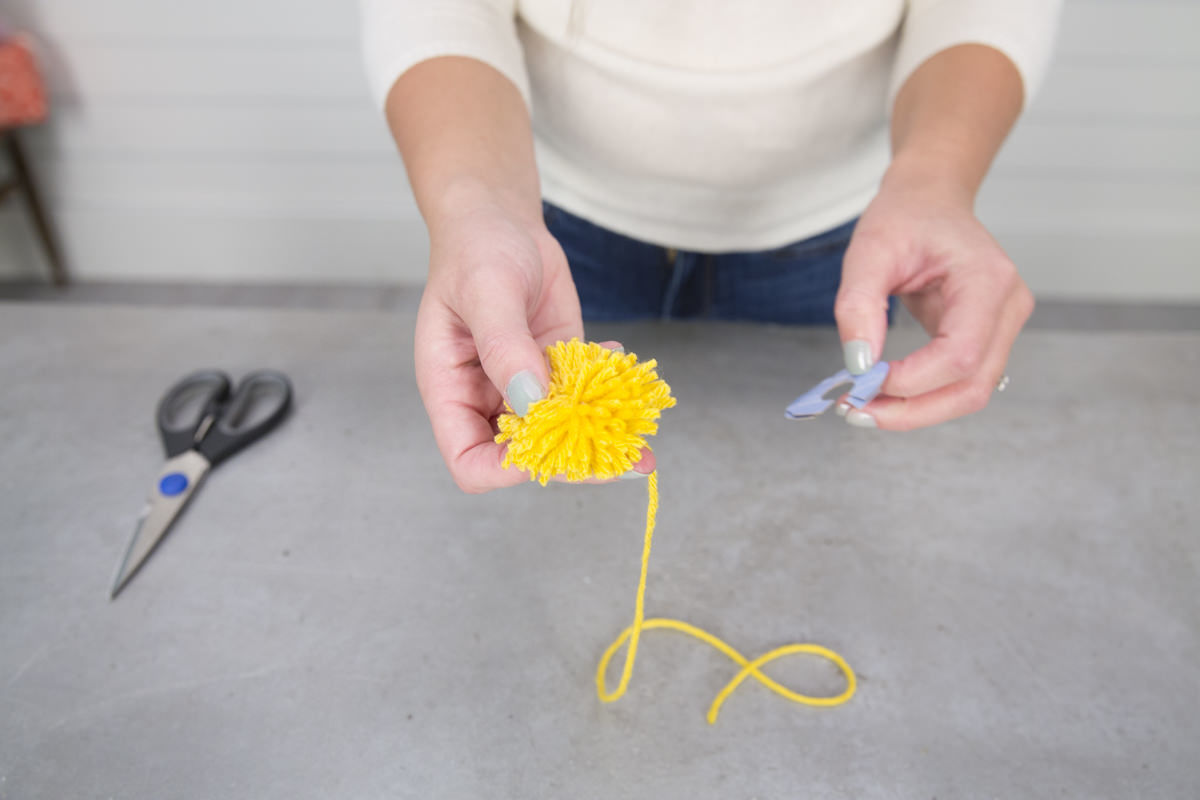 Now take a large drill bit (roughly 1/2") and drill a hole in the center of your Styrofoam sphere; this will allow you to set the topper on your tree. This will be the body of the tree topper. Measure the depth of the drill bit against the diameter of the Styrofoam and tape off the bit if necessary so that you don't break through the opposite side of the sphere. Our styrofoam was much deeper than the length of the bit, so we just went as deep as we could.

Once you have one hole drilled, expand the width by drilling another one right next to it and then breaking down the wall in between the two holes using a pair of scissors (or a butter knife) like an ice pick. If you have a tree on hand already, this is a great time to fit the Styrofoam on the tree and adjust accordingly. 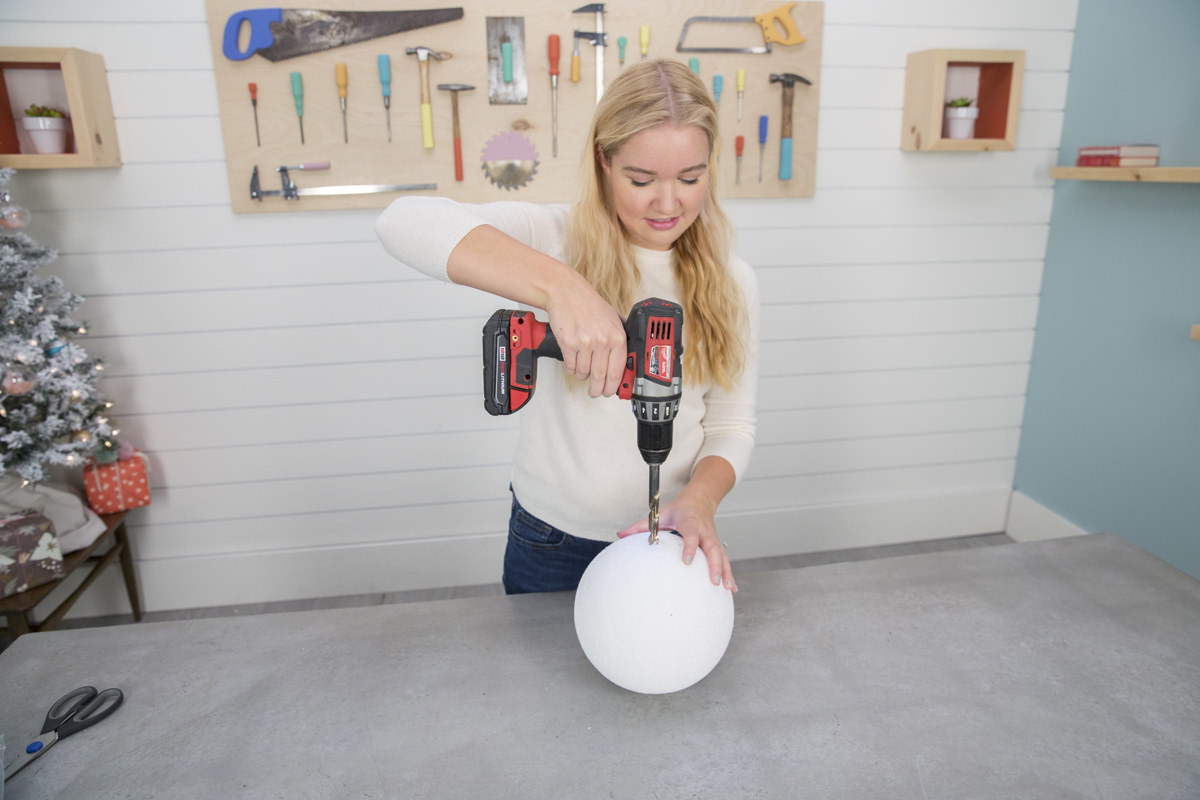 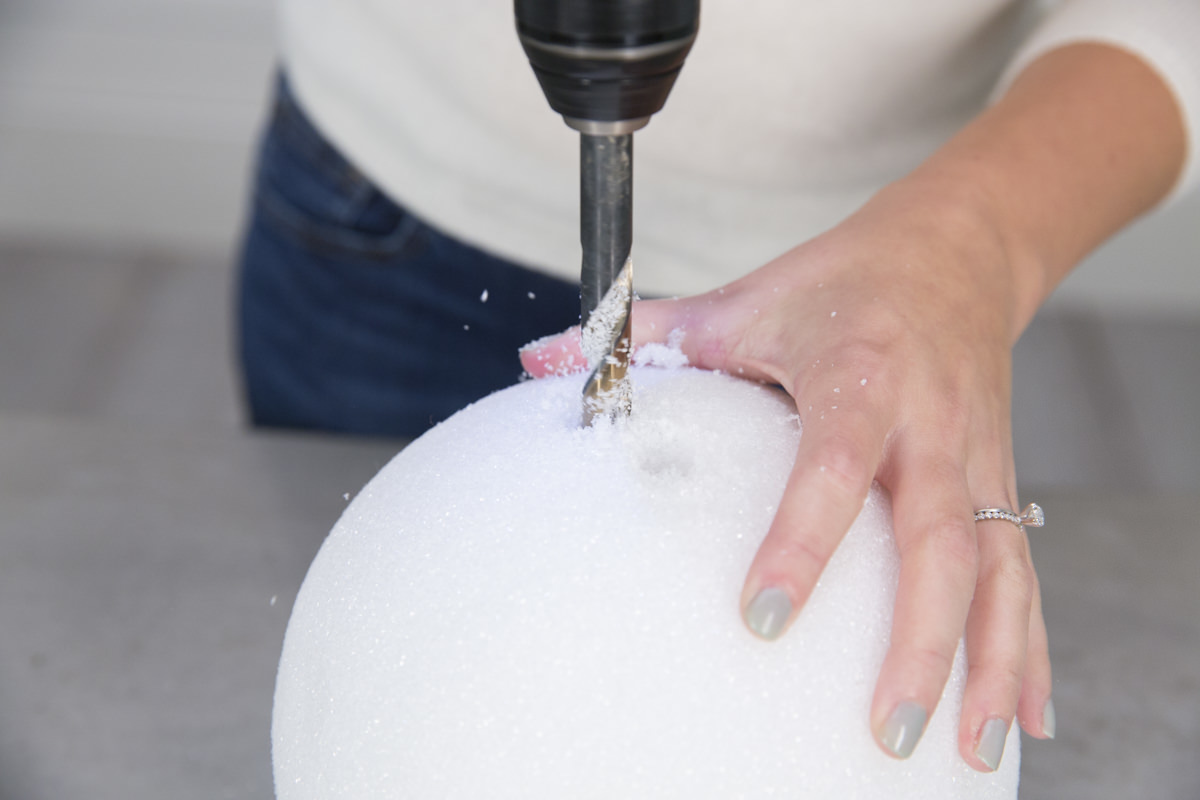 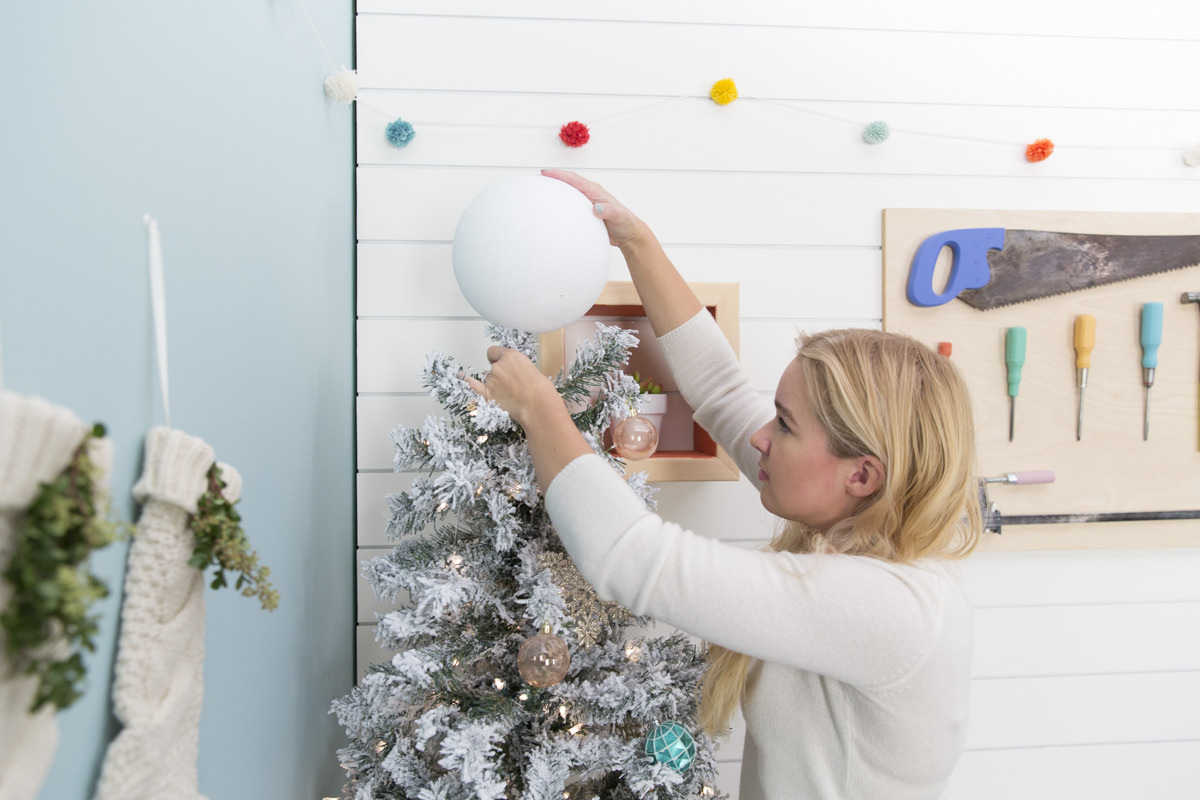 I’m a perfectionist, and wanted a very precise “random” pattern for this tree topper. I wanted a mix of different sizes and of different colors without any of the same two colors touching, so I arranged my pom-poms on a flat surface before starting to glue them to the Styrofoam. I made a 15” x 15” square, which ended up not being big enough. I would suggest making a 20” x 20” circle instead. Just know that this method can be helpful in getting started, but it won’t be a perfect transfer from tabletop to sphere. 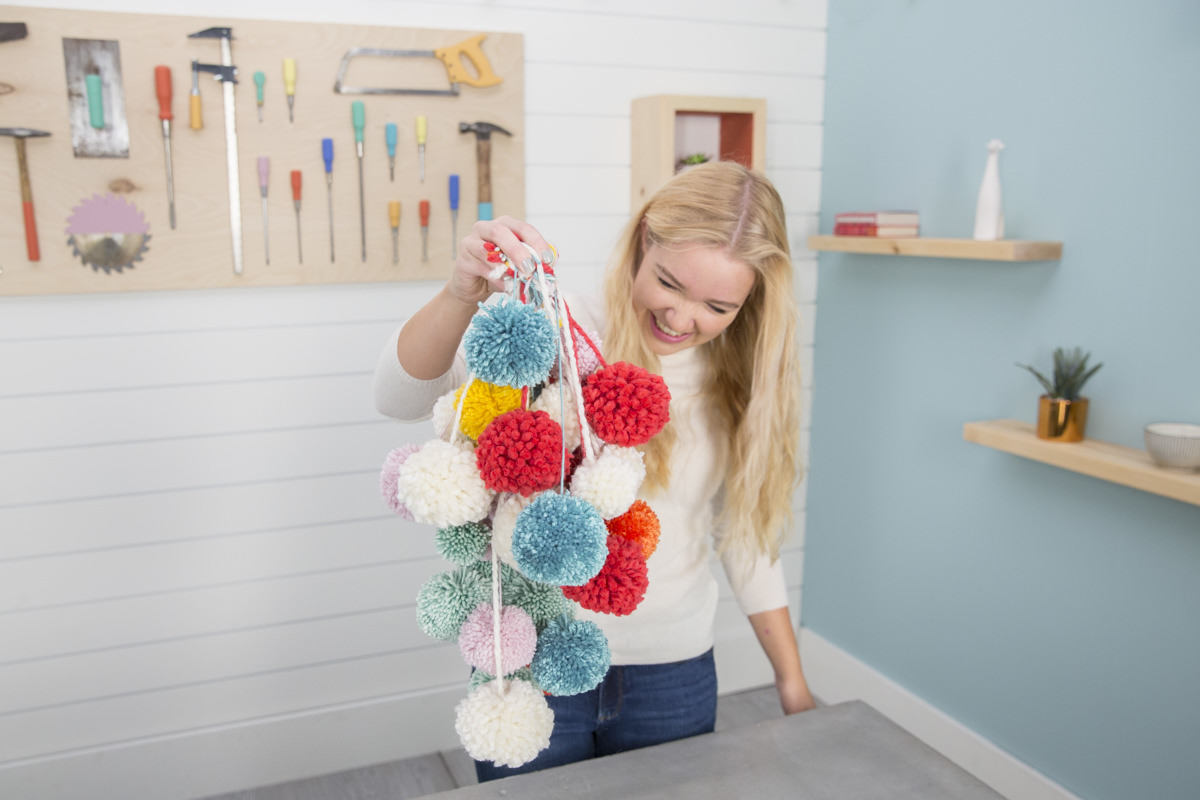 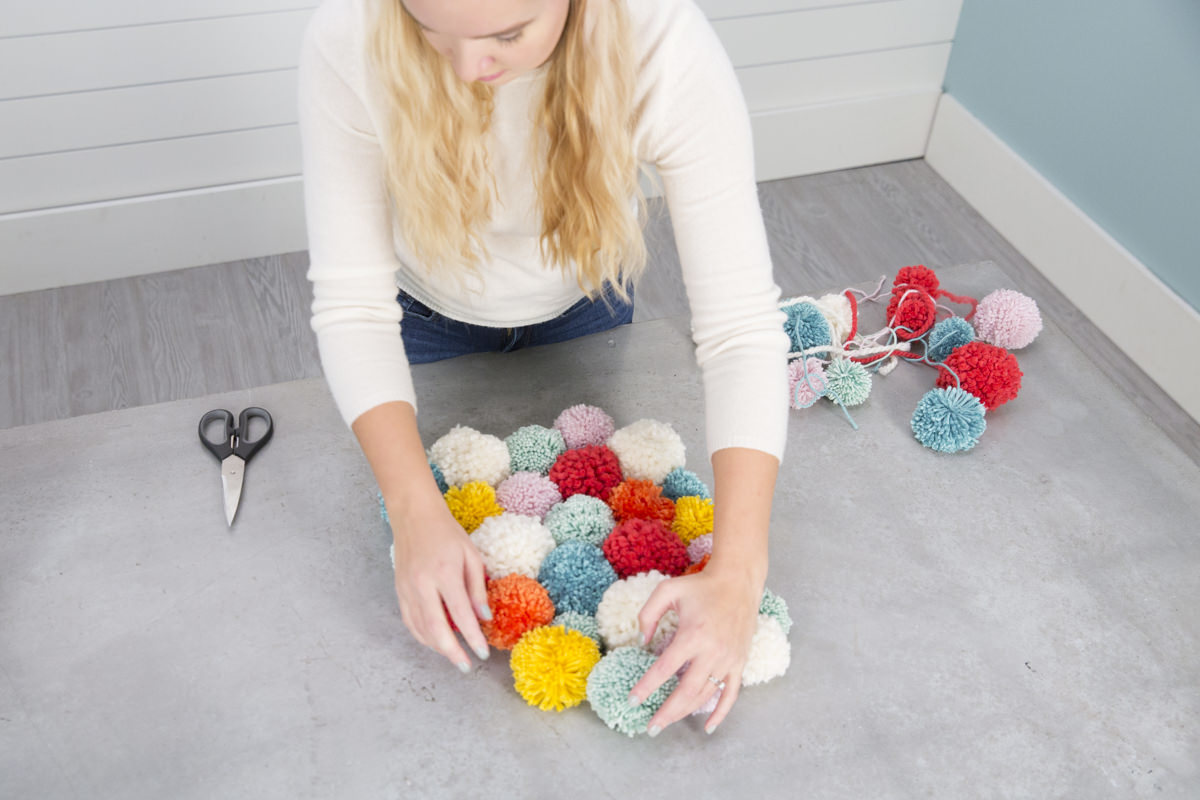 Now it’s time to arrange the pom-poms on the Styrofoam and attach them all with hot glue, keeping the pom-poms close enough together so that none of the Styrofoam shows through. For a really secure configuration, push down the sides of the pom-pom (not just the center) when you’re gluing. 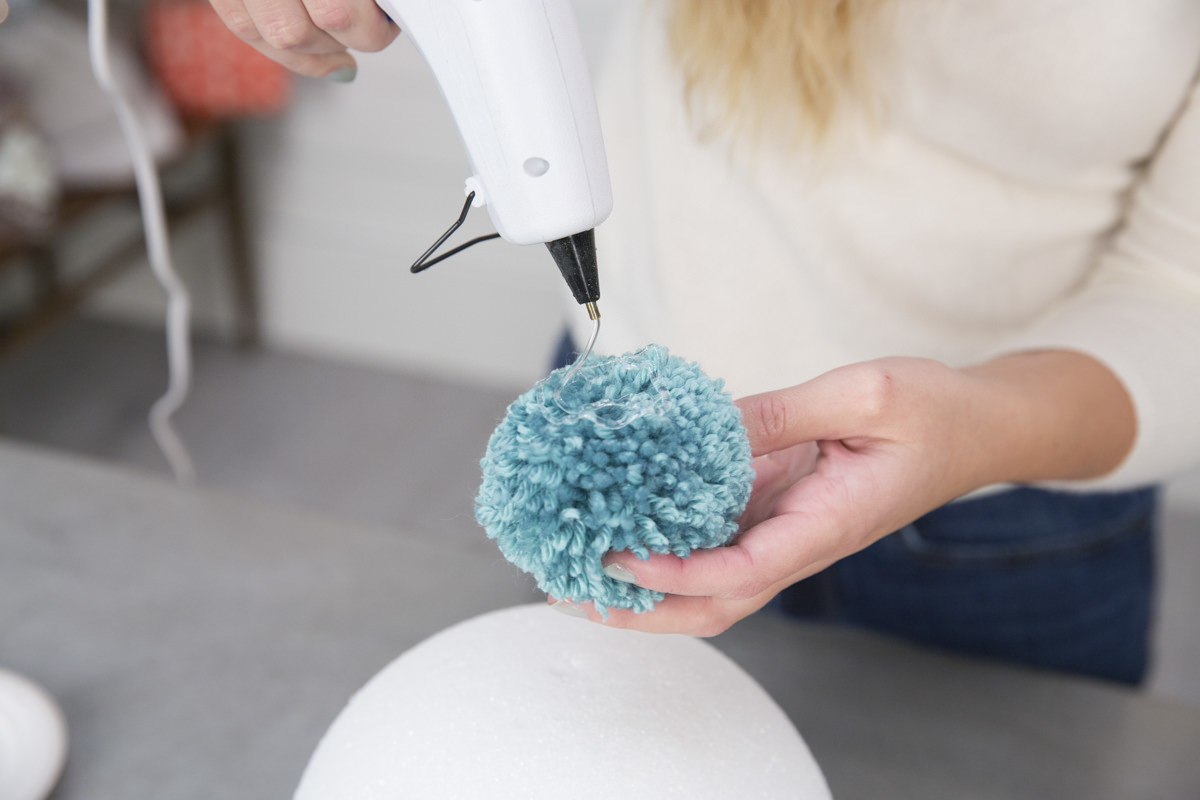 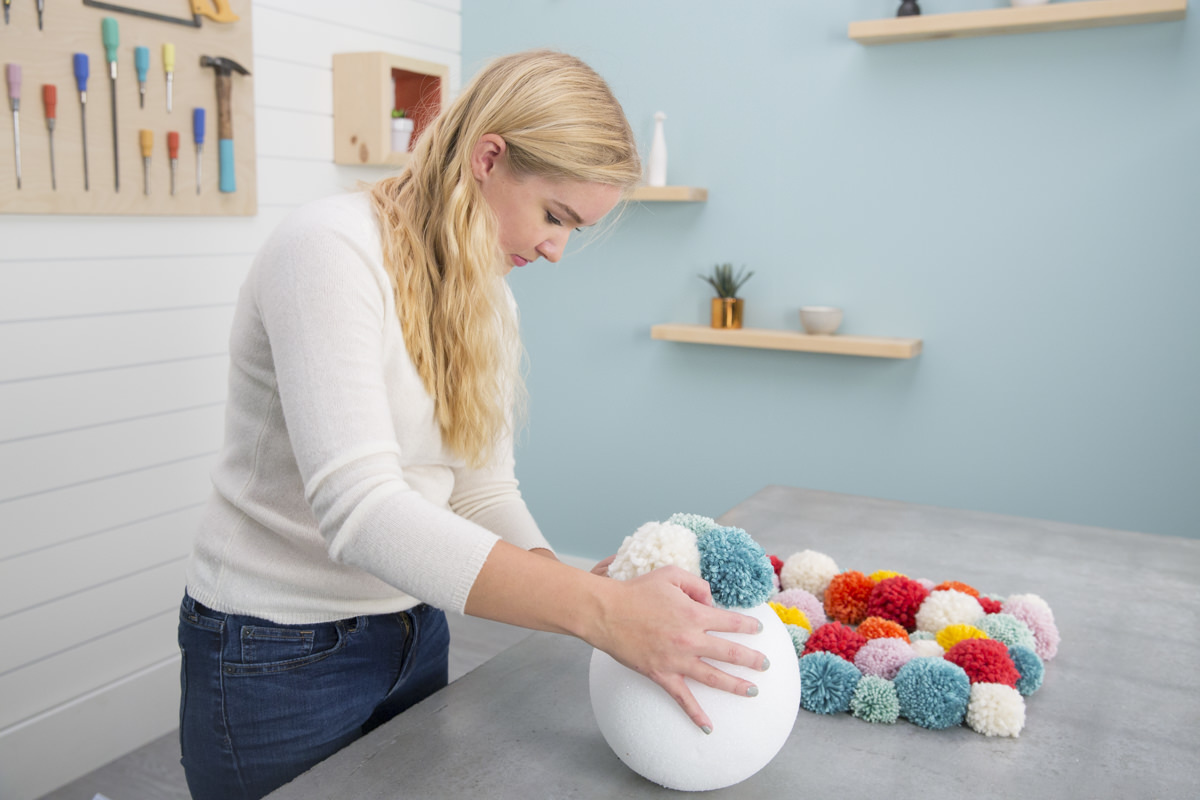 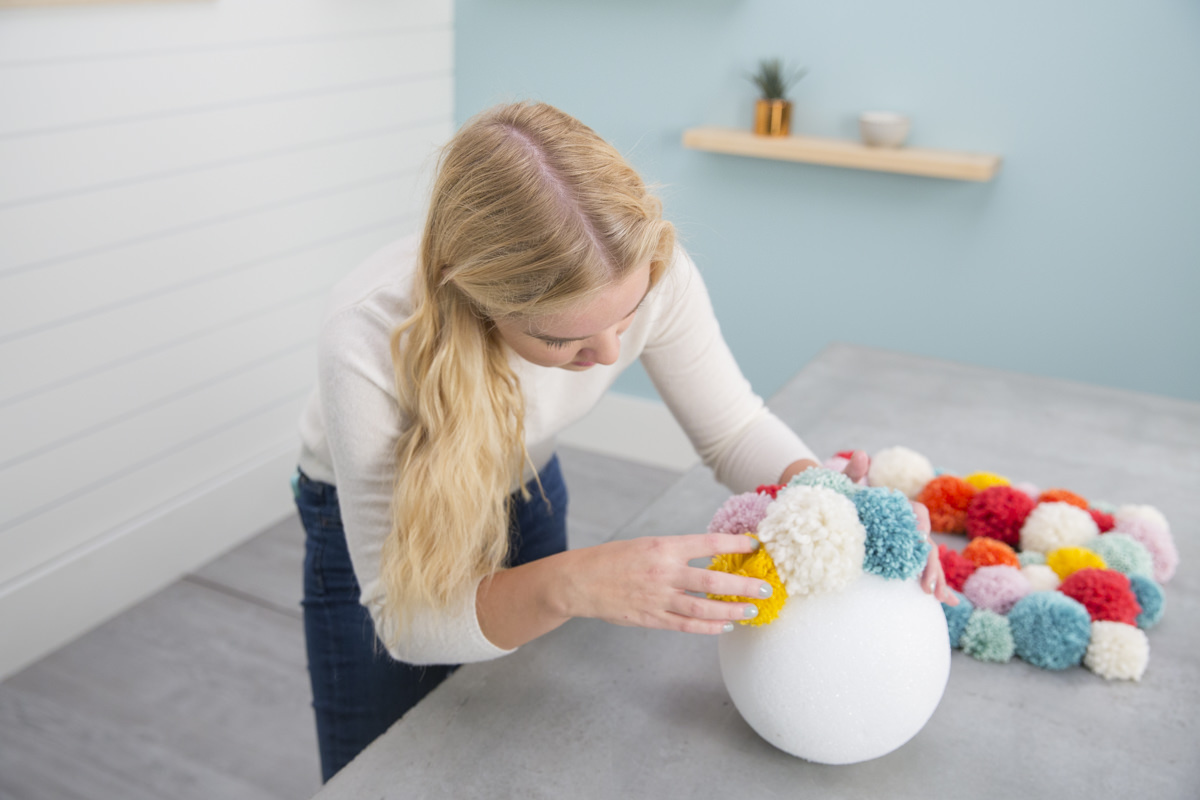 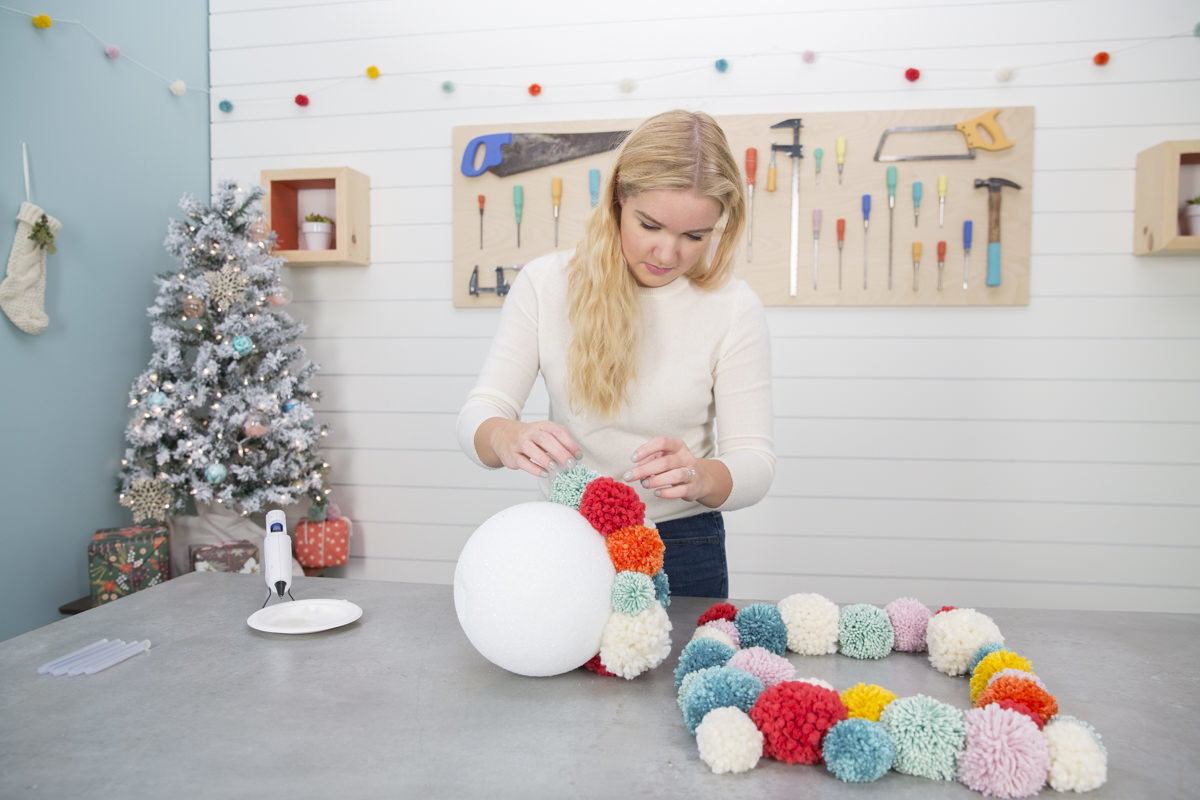 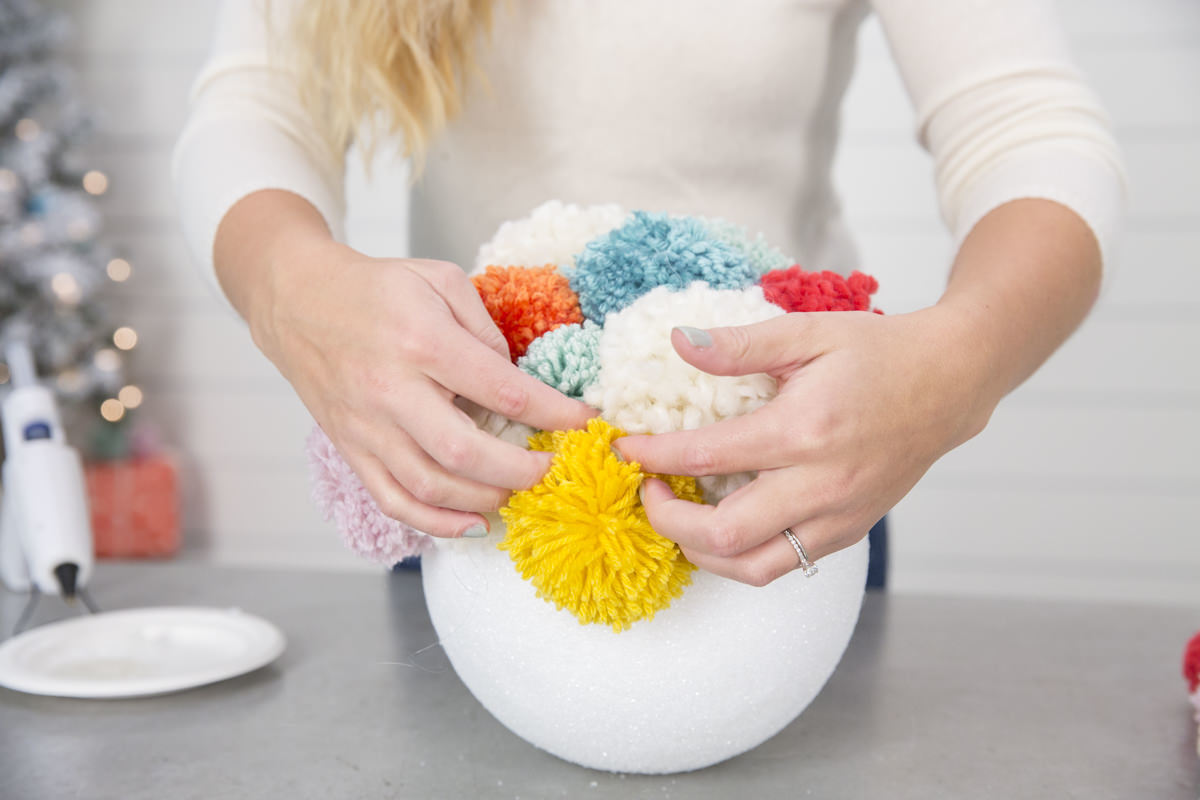 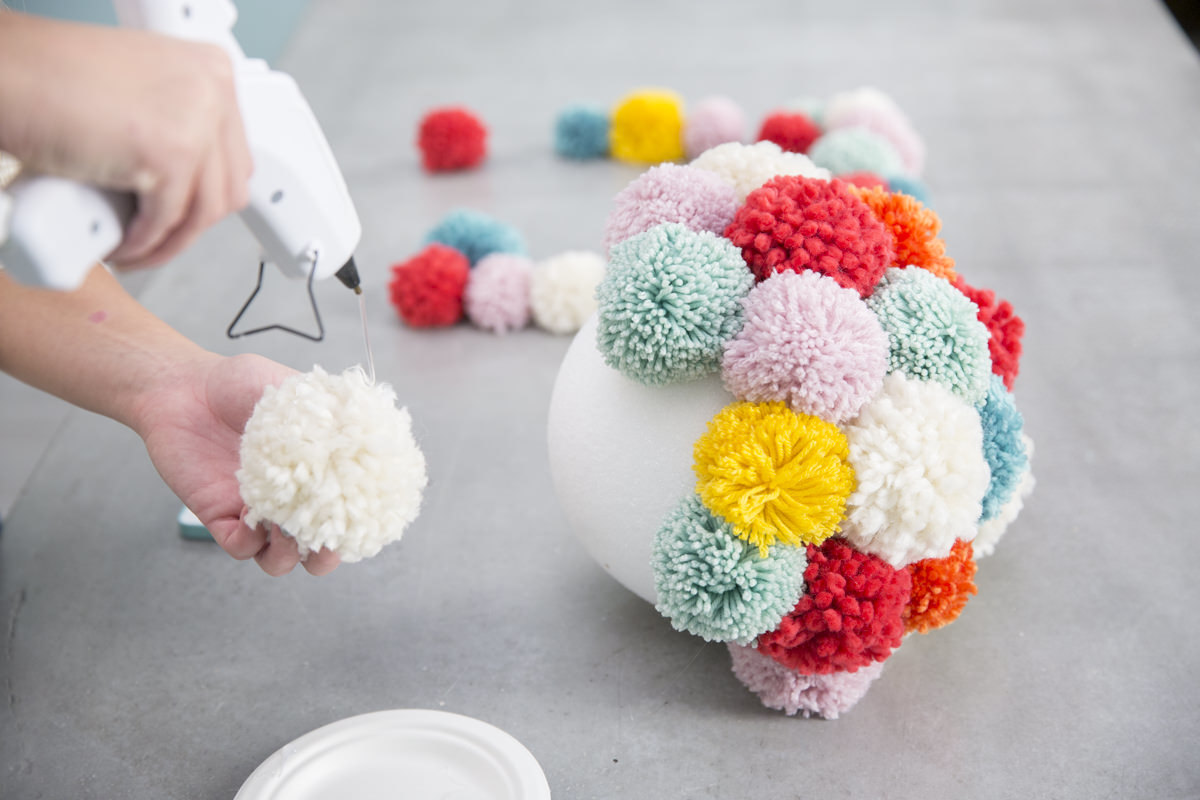 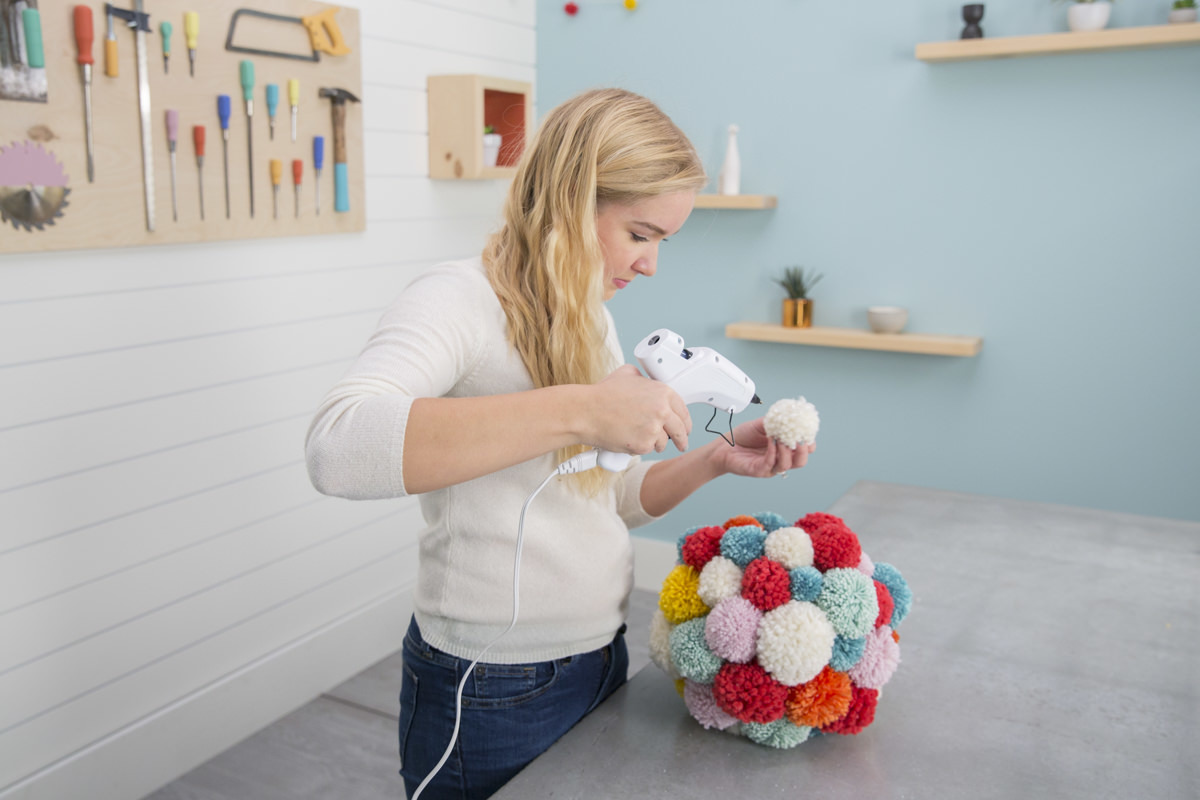 The last step is fitting your pom-pom topper on the tree. We were working with a fairly small artificial tree, which meant it took a little bending and manipulating of the tree before the topper was on straight and secure. Like most tree toppers, it might take a couple tries to get it right. 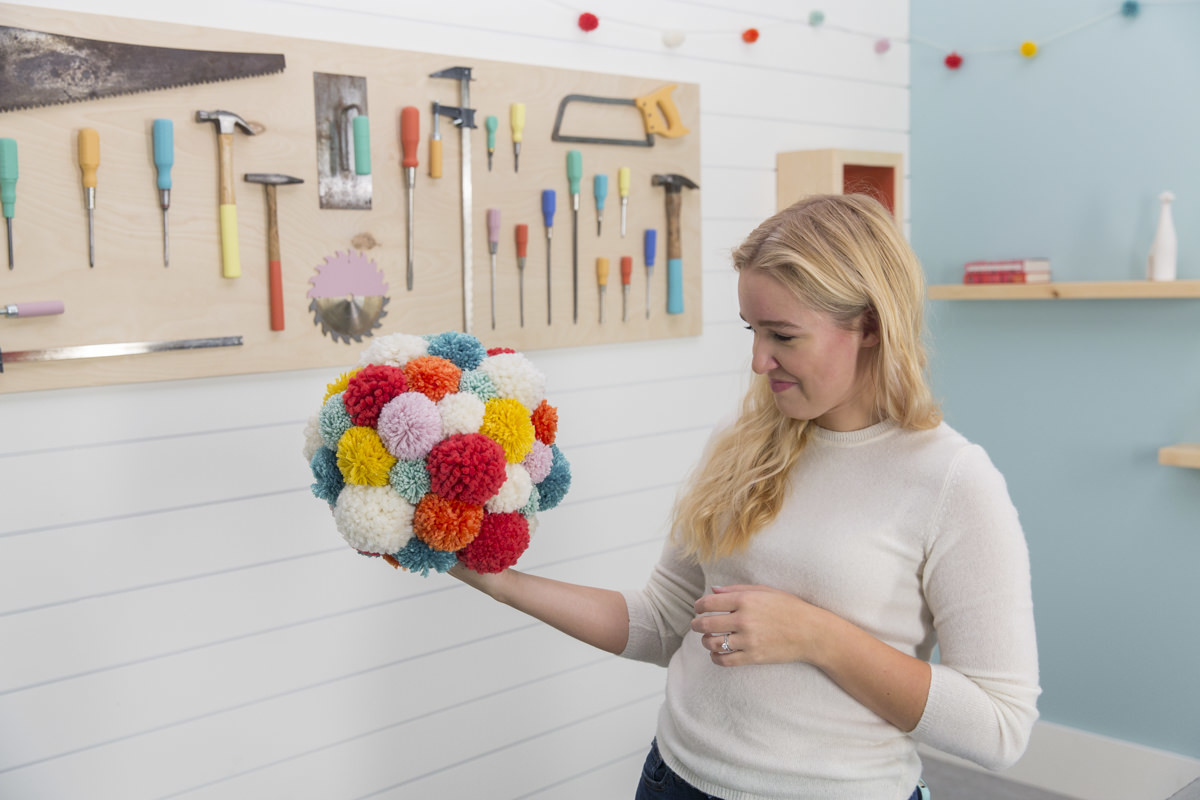 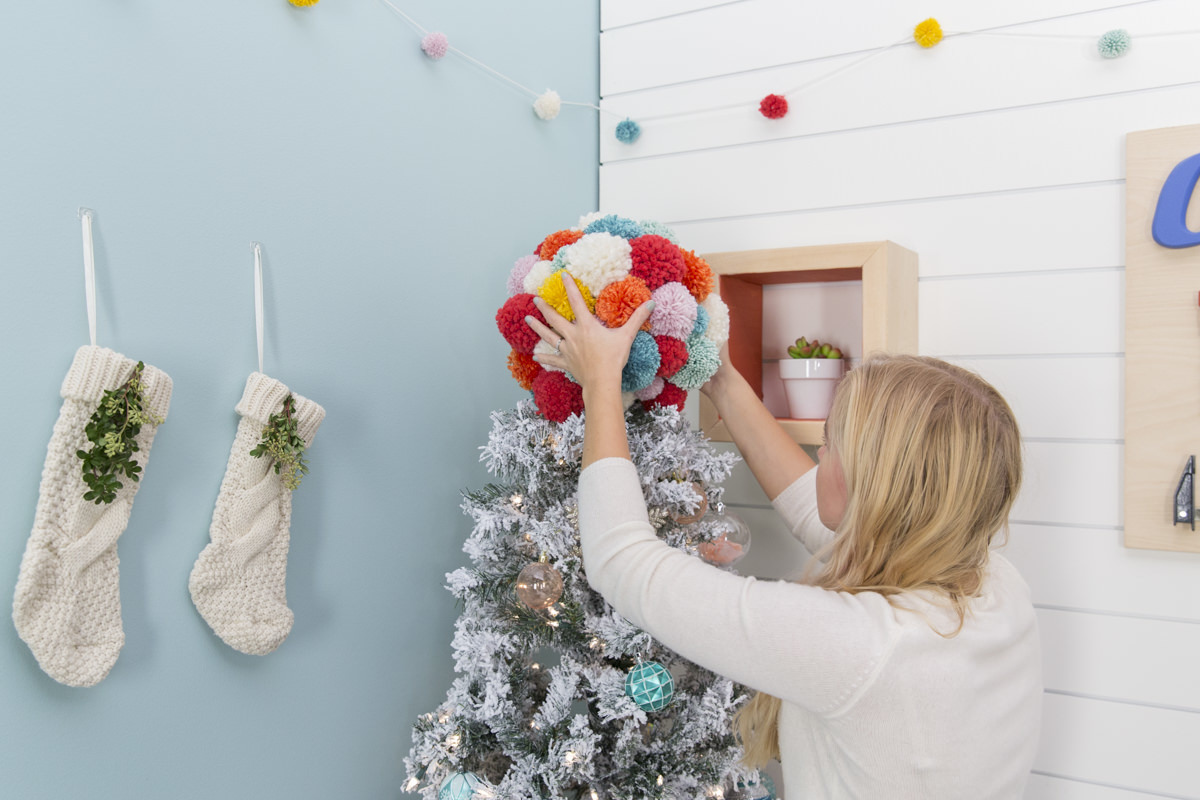 I love this pom-pom tree topper because it’s a bright and colorful alternative to a traditional star or angel. It’s a little more playful, and there’s something wonderful and whimsical about it that just screams “Christmas cheer.” Not to mention there's no end to the ways you can accessorize your holiday decor with homemade pom-poms! Happy decorating! 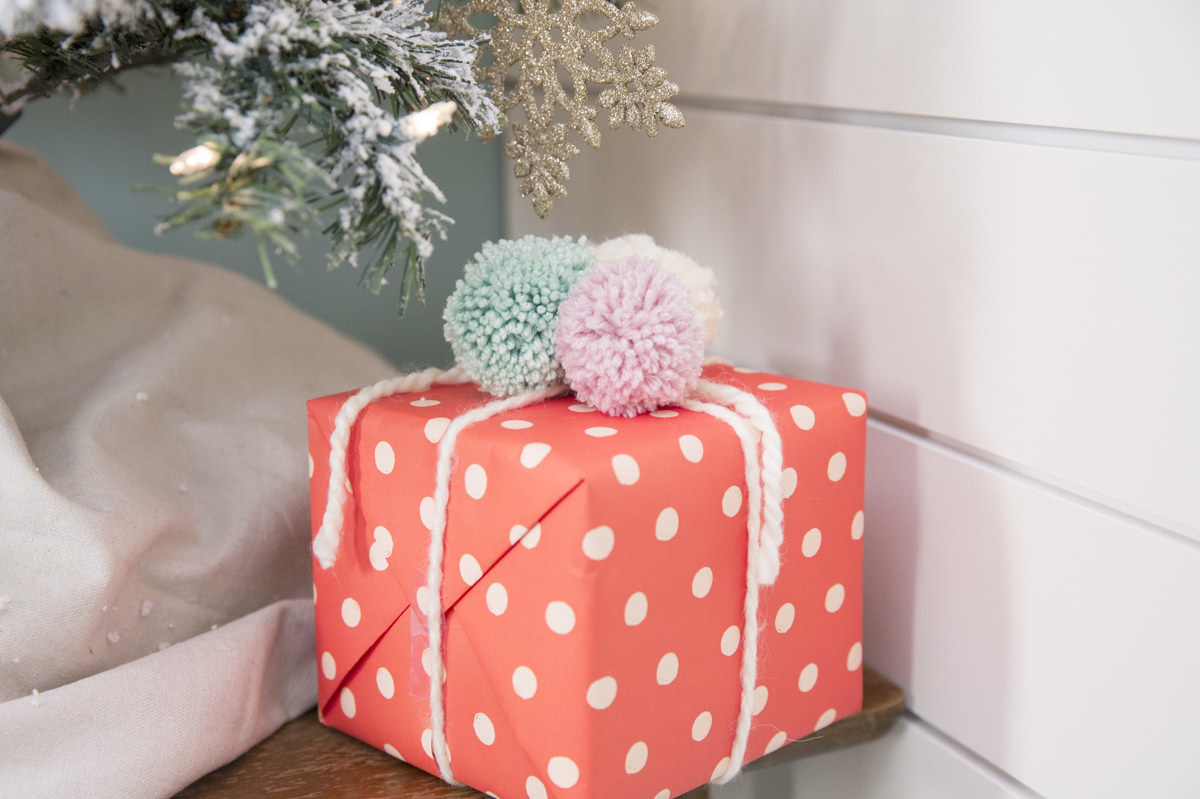 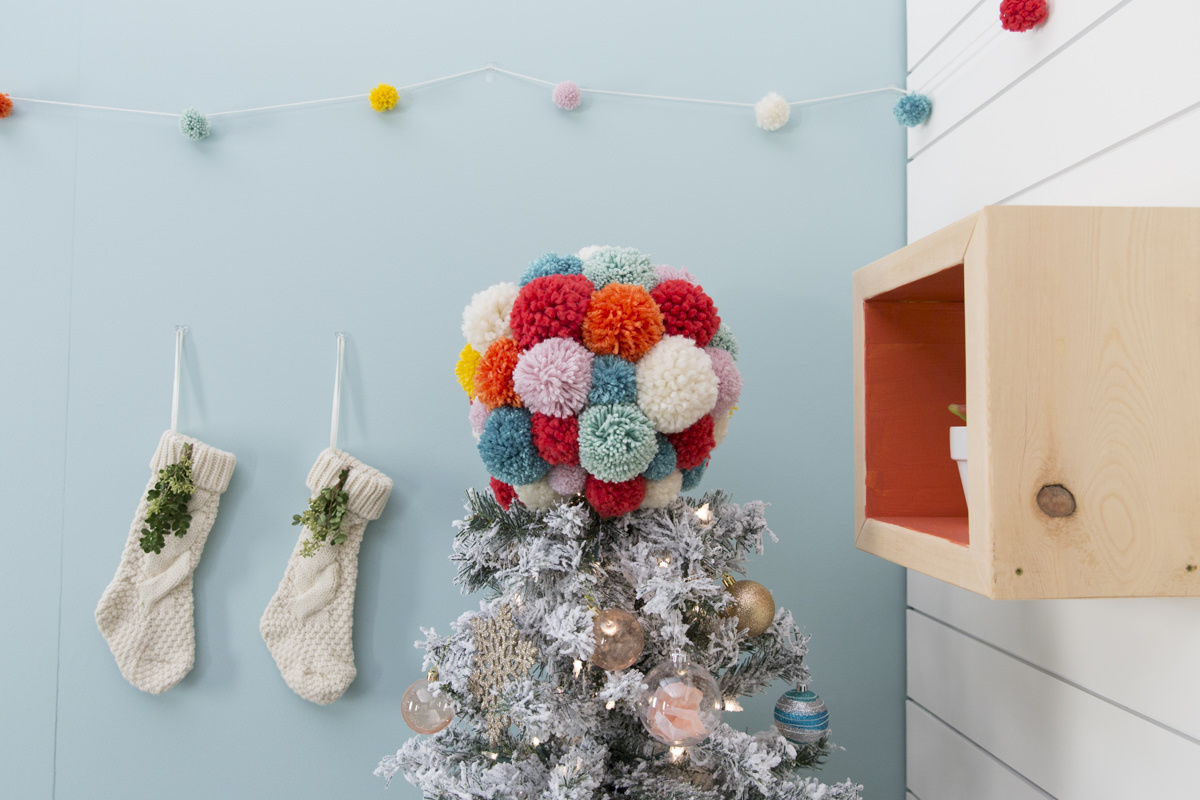 How to Make a DIY Plinko Game Board

Bring the classic “The Price Is Right” game to your backyard with our mini Plinko tutorial.

A white Christmas would be lovely. But here in the Pacific Northwest we're used to the rainy ones. So we made our own snowflakes! This is an easy project that can take a few minutes or an afternoon. You can add glitter and sequins, or keep your snowflakes simple.

How to Make a Lemonade Stand

My dad and I came up with this Lemonade stand designed to be beautiful but simple enough that kid participation—depending on age or skill level—would be possible.