Much to my disappointment, I did not grow up with a slip-and-slide. One summer, my brother and I were so desperate for one that we decided to make our own. We rummaged up one of my dad's old tarps from the garage, hosed it down, squirted some soap on it, and had at it—the only problem was that it was one of those heavy-duty brown and green tarps that has the woven fibers in them. We spent 20 minutes sliding down that thing until we realized that our stomachs were completely raw and we just couldn’t do it anymore. Needless to say, it was not the most fun I’ve ever had.

As an adult, the idea of building a DIY slip-and-slide—not necessarily careening down one head-first—is more appealing to me. Plus, building my own means I can make it exactly like I would have wanted it: with a little splash pool at the bottom. (Who wants to slide into a muddy patch of grass?) A homemade slip-and-slide also means you can customize it to fit your space: you can buy a 50’ sheet of polyethylene and make a super long slip-and-slide, or make a petite one that’s 10’ or 20’ long.

Even better? All you need to build one is a few hours on a sunny afternoon.

The materials for this project are pretty straightforward: the two main ones are PVC pipe and construction-grade lumber. All the water flows through the pipe—almost like an extension of the hose you’ll be attaching at the very end.

The cuts for the PVC are pretty minimal. I used a miter box and a backsaw, but you could totally get away with a regular handsaw. You can also try pipe cutters, but they’re fairly expensive. If you have them, great, if not, go with what you’ve got. One note if what you’ve got is a chop saw: make sure to clamp down your PVC (which is a good thing to do with any saw, really) and wear protective eyewear—it has a tendency to jump.

Here are your cuts: 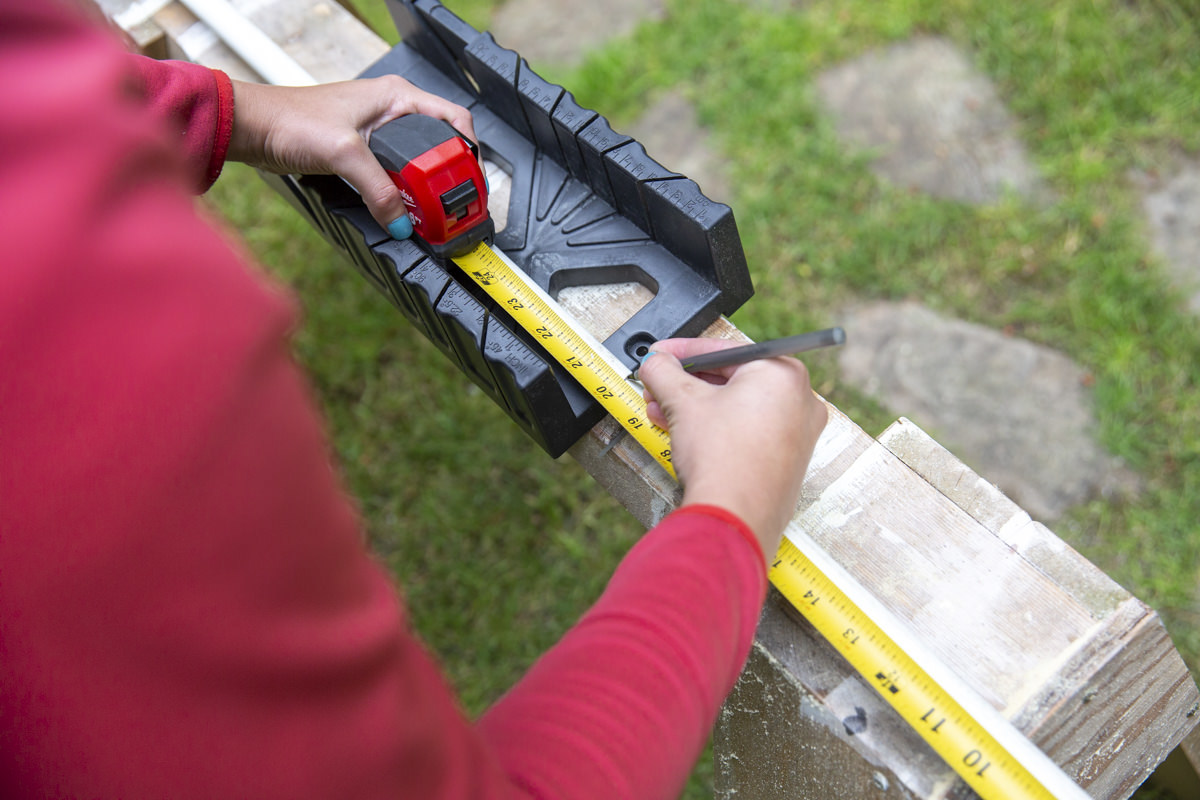 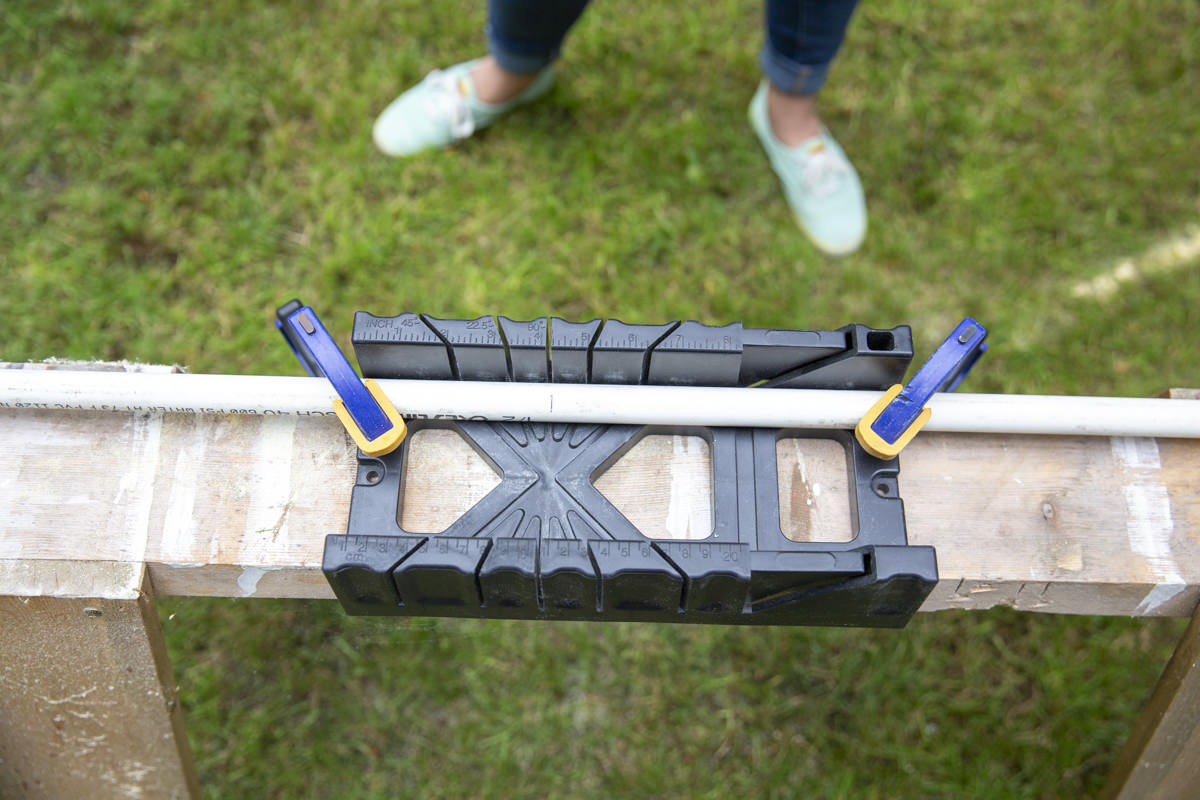 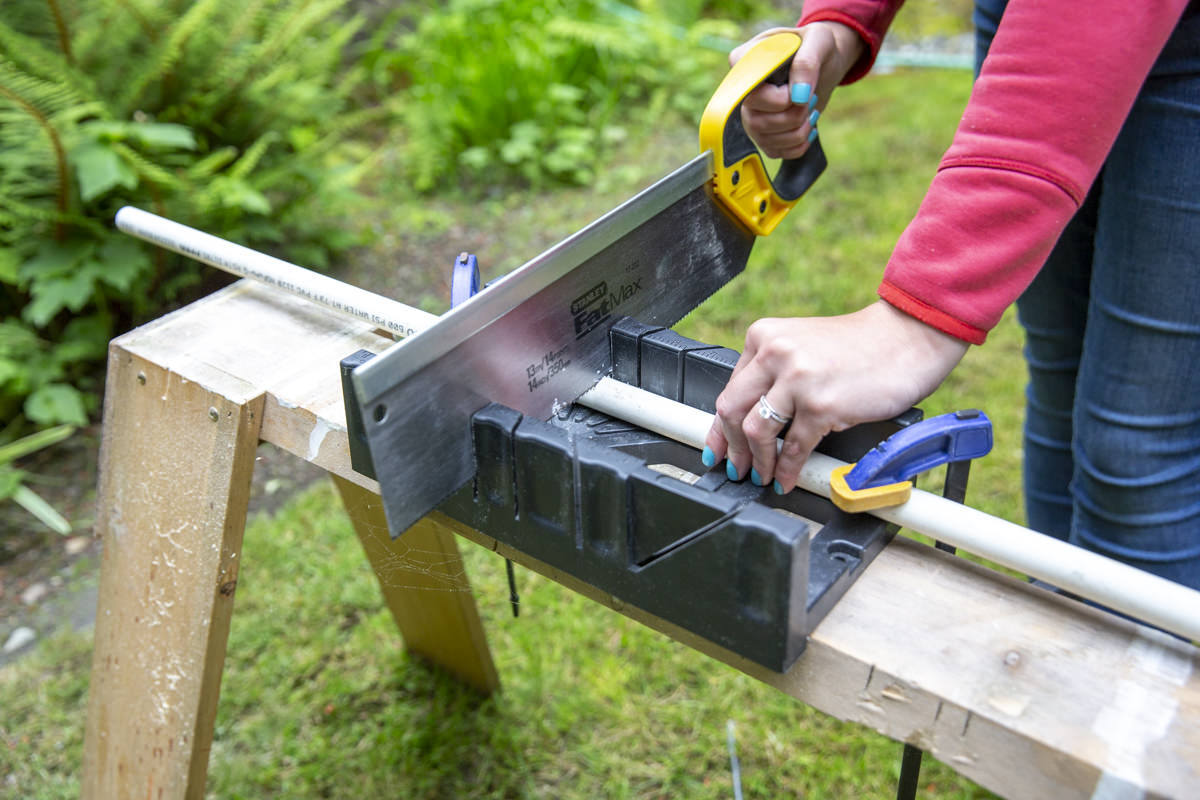 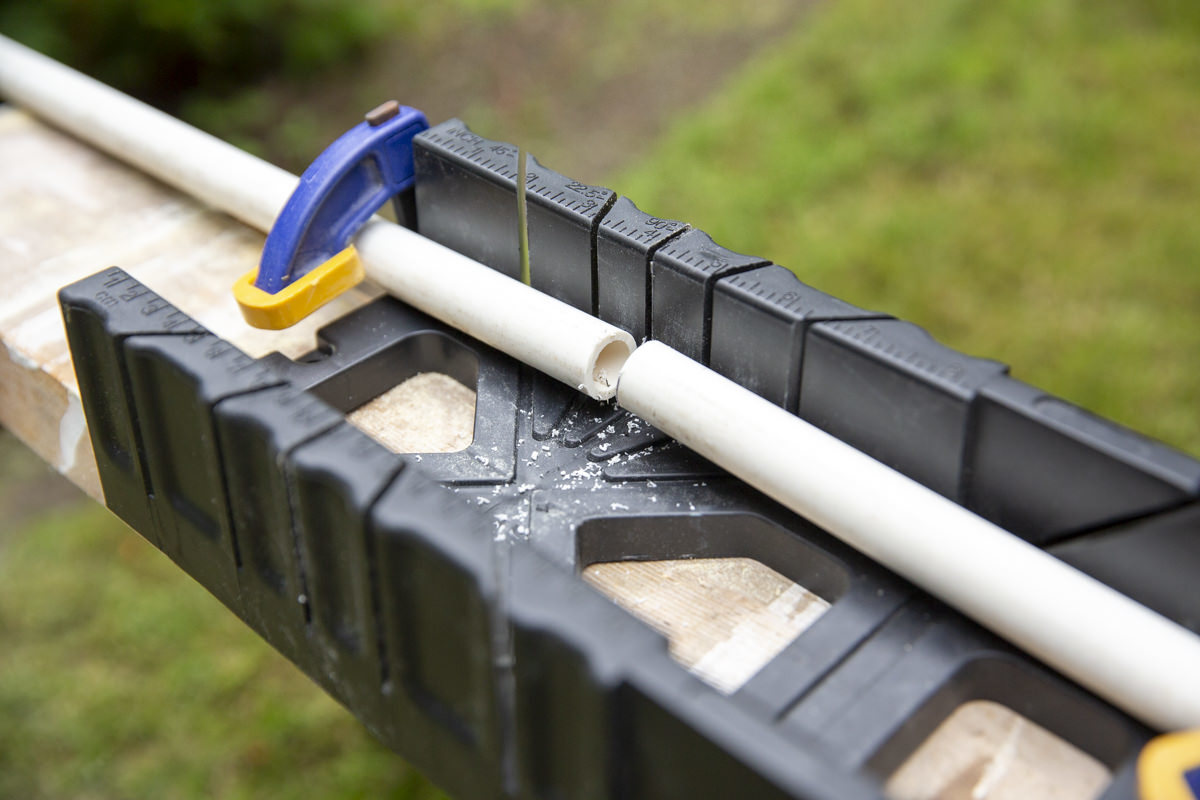 Next, cut your wood. We’re using construction-grade lumber, though we’ll eventually cover the wood with pool noodles, so it’ll barely be seen. I used construction-grade two-by-threes because it’s what I had lying around—you can use whatever works for you, even if it’s a two-by-four.

Most of the cuts are straightforward:

The trickiest part here isn’t all that tricky: it’s cutting two of the two-by-sixes at a long, sloped angle. Those pieces will form the sides of the splashdown pool. The sides are angled to increase in height—which allows the pool to hold more water. You’ll be able to make this cut if you have a circular saw. If not, you’re in for long cuts with a handsaw, or you can make the pool from lumber that’s not as wide (if you’re fine with less water in the pool).

To make this cut with a circular saw, mark a 2 1/2" width on one end of the 28” two-by-six. Use a straightedge to create an angle cut. Clamp down, saw, then repeat with the other 48” two-by-six.

Finally: because this is outside and mostly covered, you don’t need to worry about sanding any of your wood. 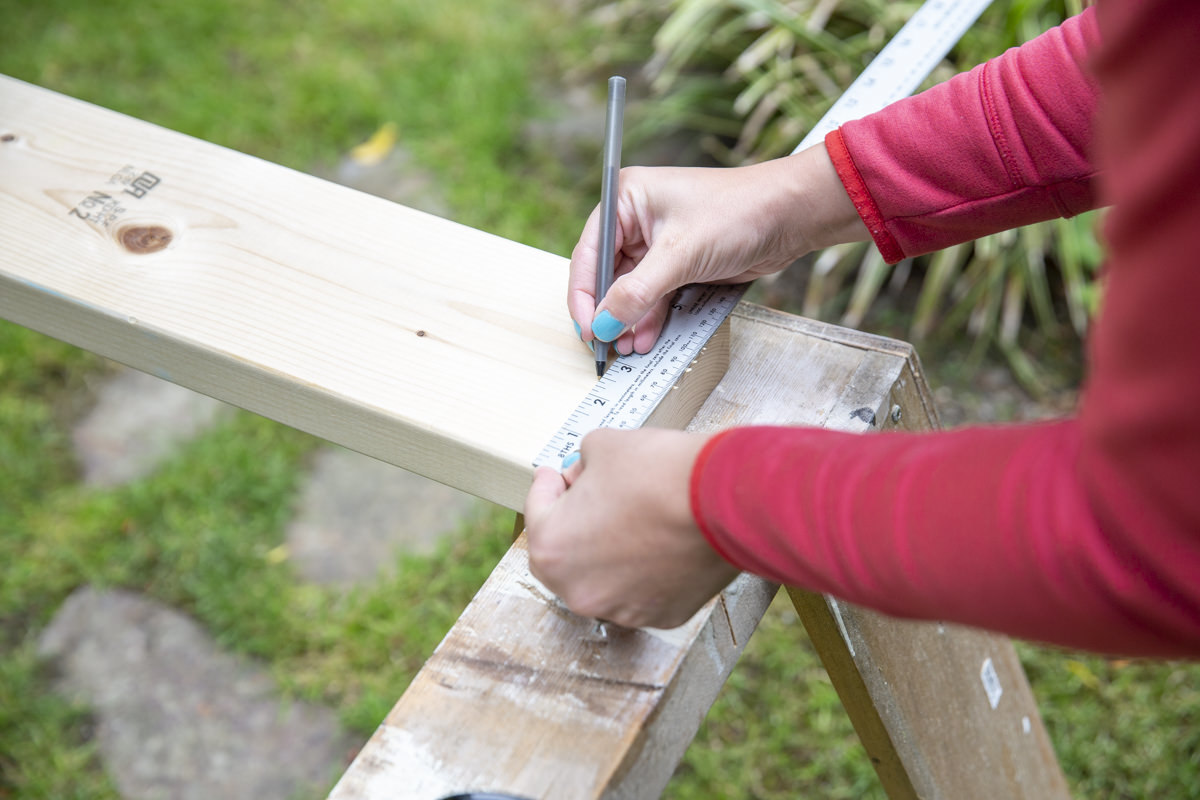 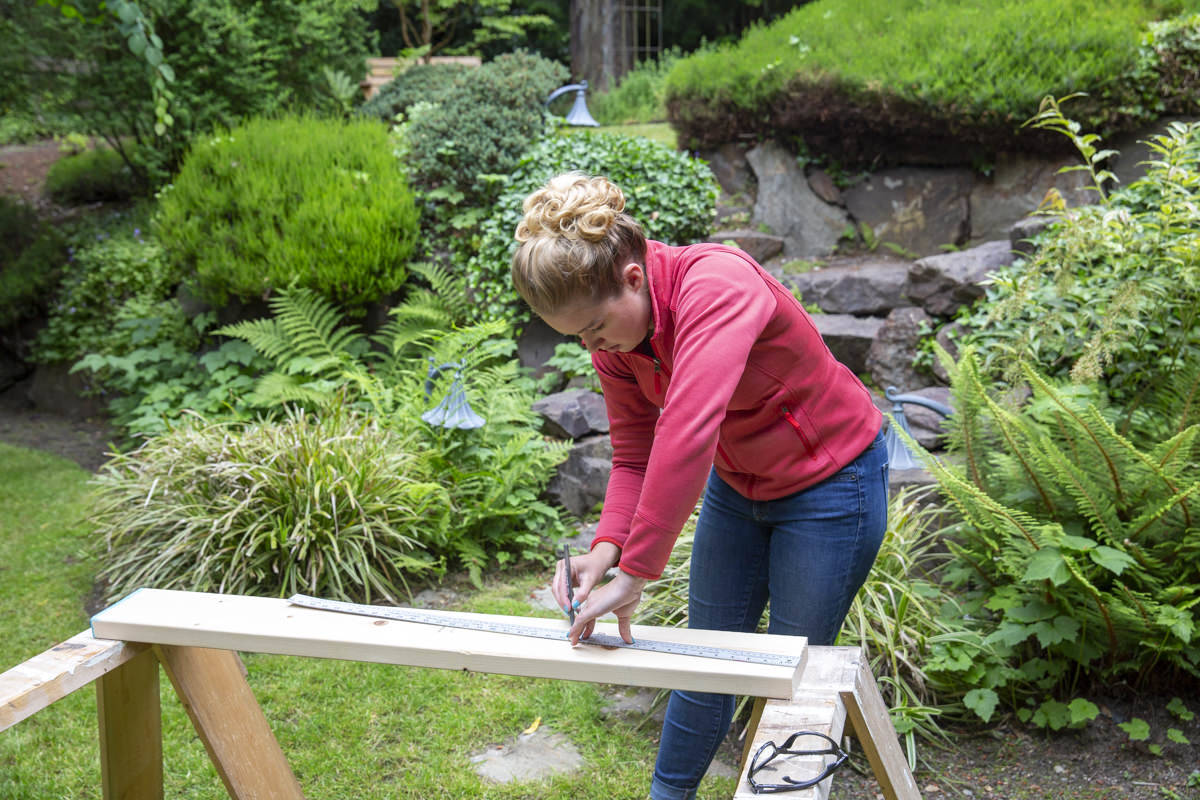 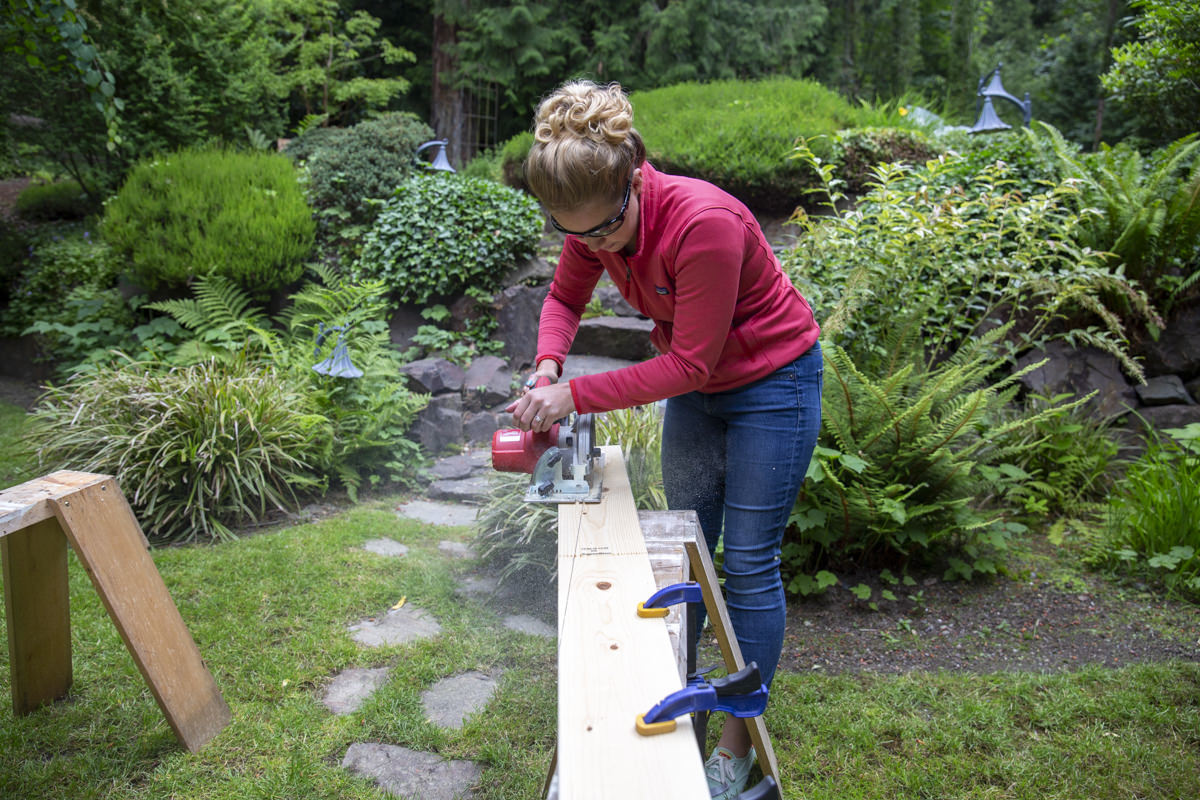 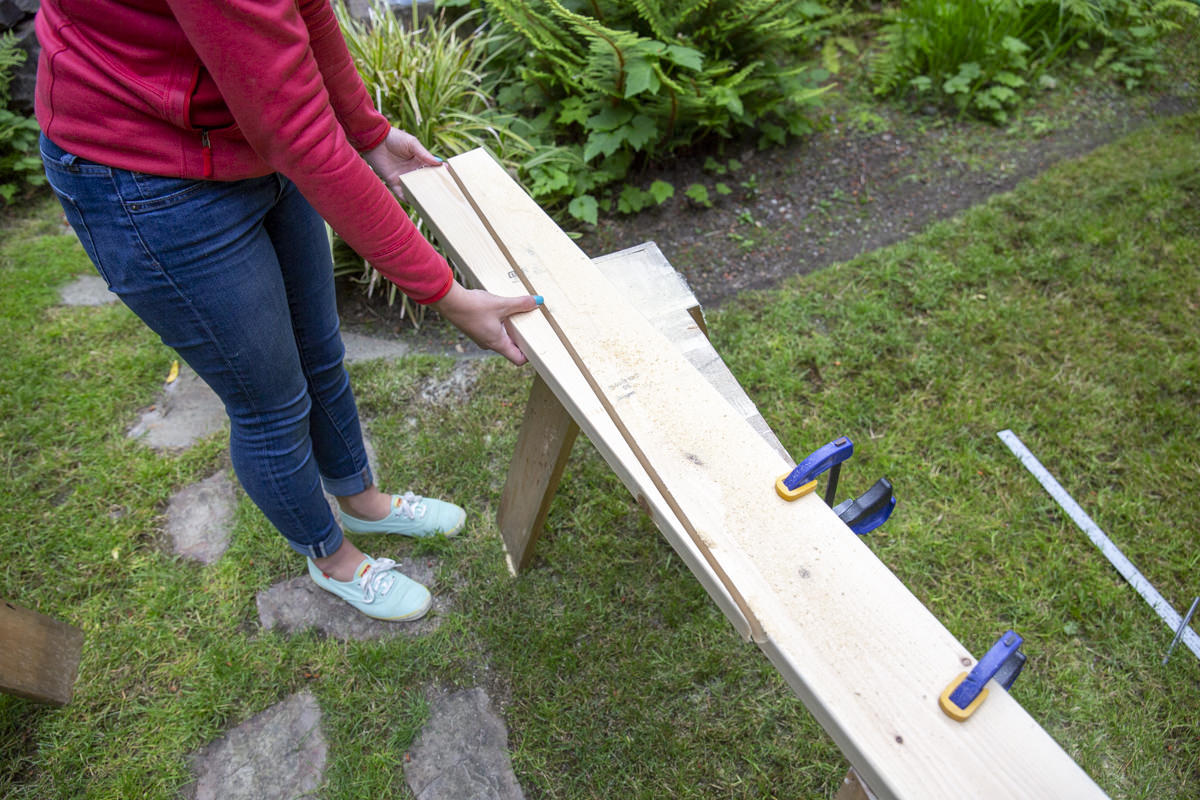 Now it’s time to make the sprayer! Take both 48” pieces of PVC pipe and all three of the 20” pieces. Measure along the length and mark every 3” inches. Drill holes with a 3/32” drill bit. Try to do it in a straight line, but don’t worry if it’s not perfect—the imperfection of water spraying every which-way is part of the fun! 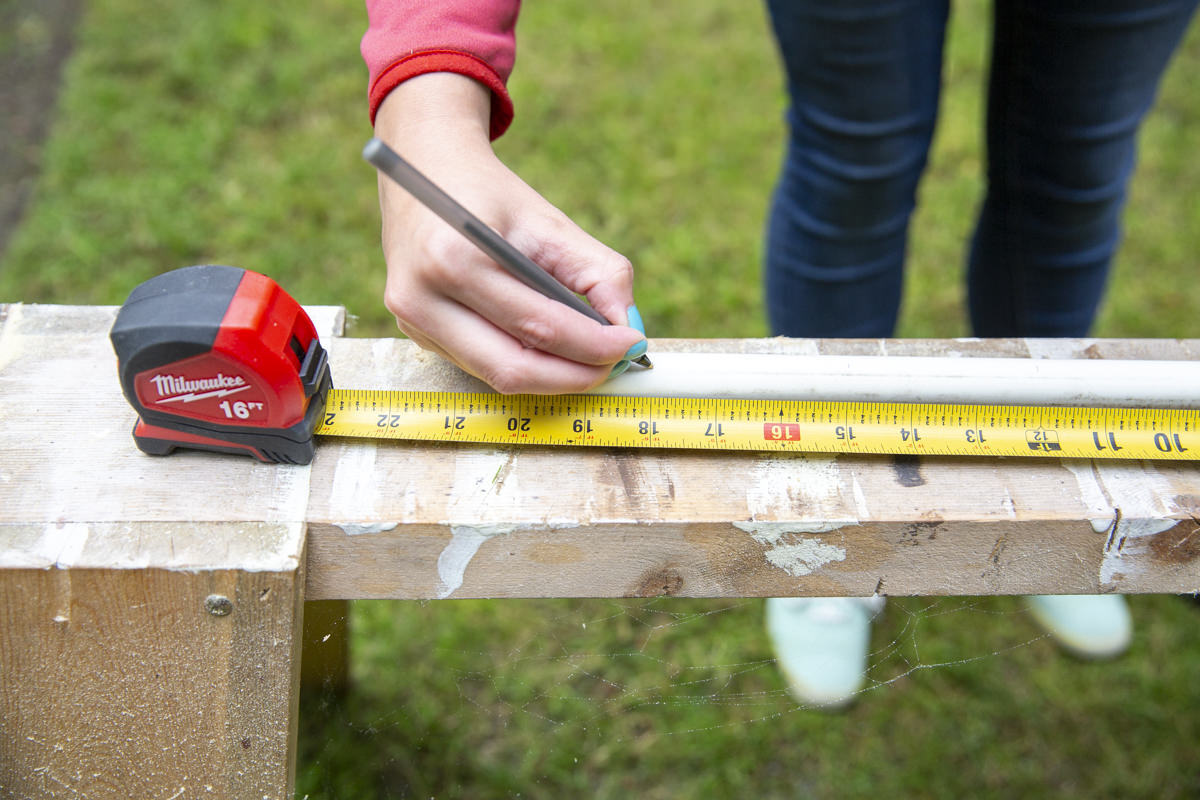 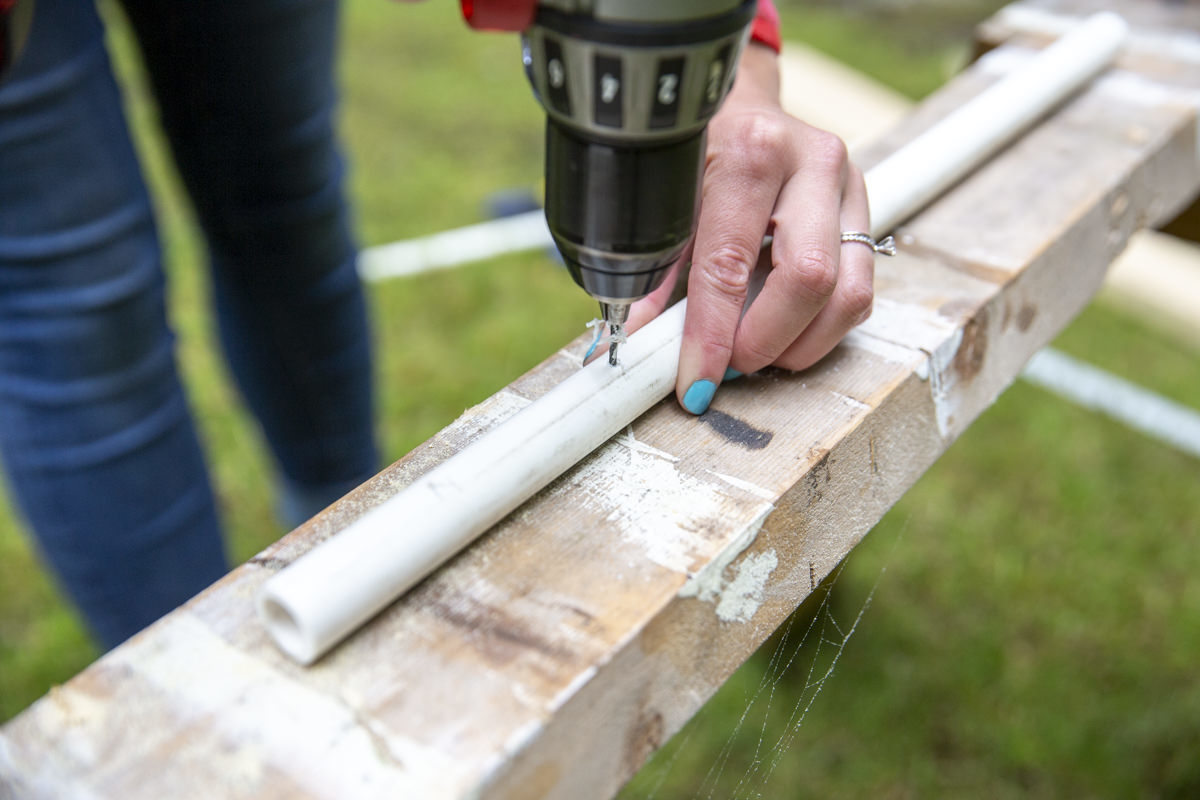 There are three PVC arches that sit over the slip-and-slide and spray water. The front arch has a totally different construct just to make things fun, plus it’s easier—you don’t want to hit your head as you start to slide. As long as you know what goes where (the GIFs should help!), this step is super easy. 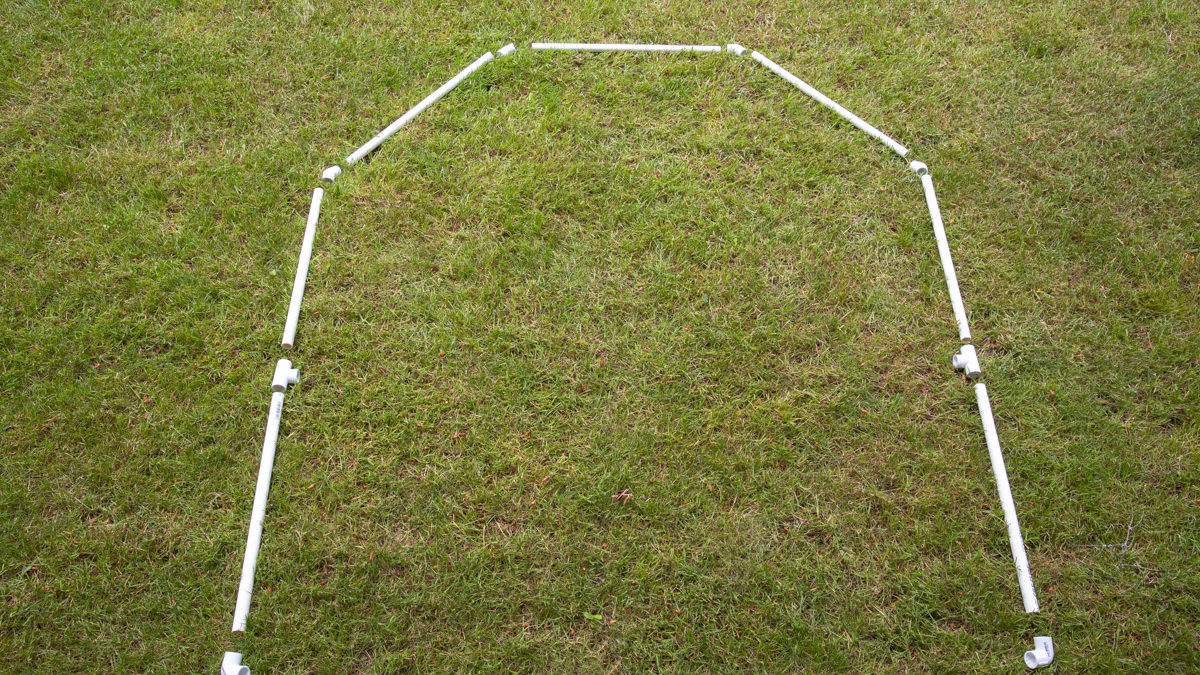 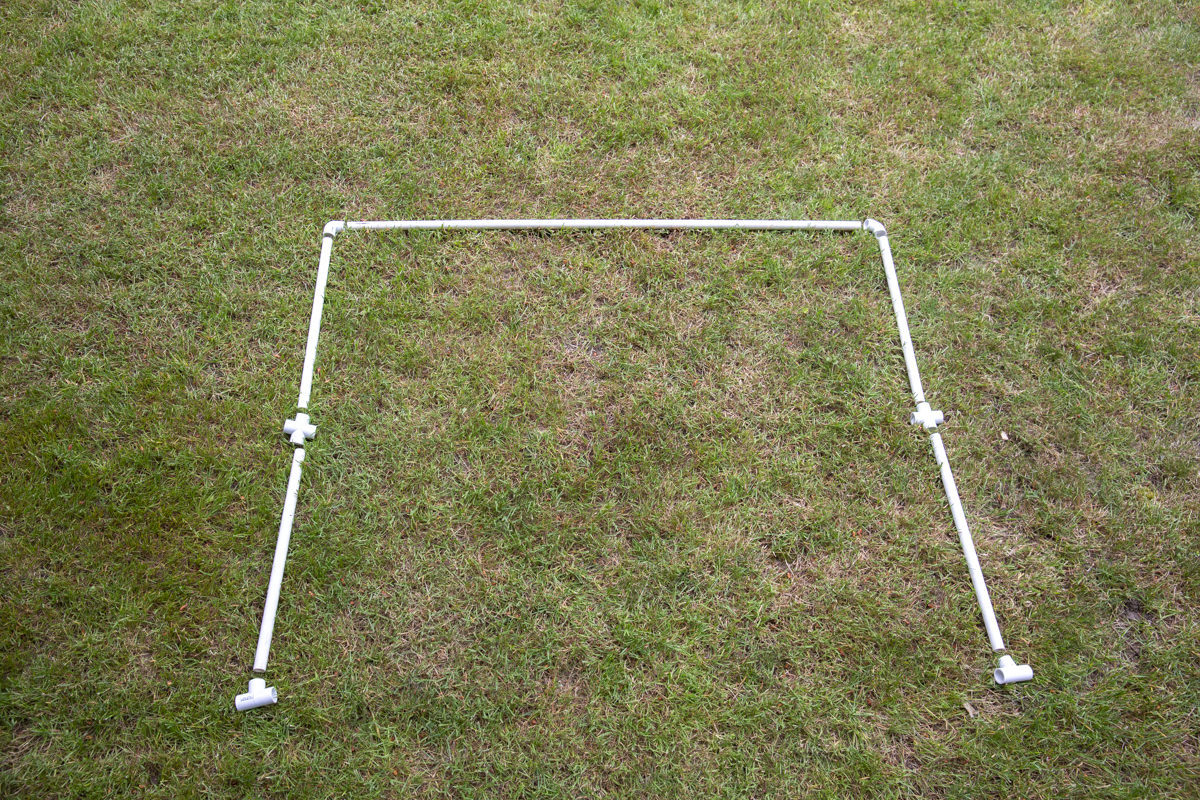 Like the middle arch, the back arch is also created with a 48” piece on the top connected to two 18” pieces with elbows. On the sides below the 18” pieces, attach tees sideways with 18” pieces below as well. On the bottom of one side, attach an elbow. Attach a tee to the other. This is where your hose connects. For us, the best location for the hose was on the back arch, but you can also replace one of the elbows on the front arch with a tee and connect the hose up there. 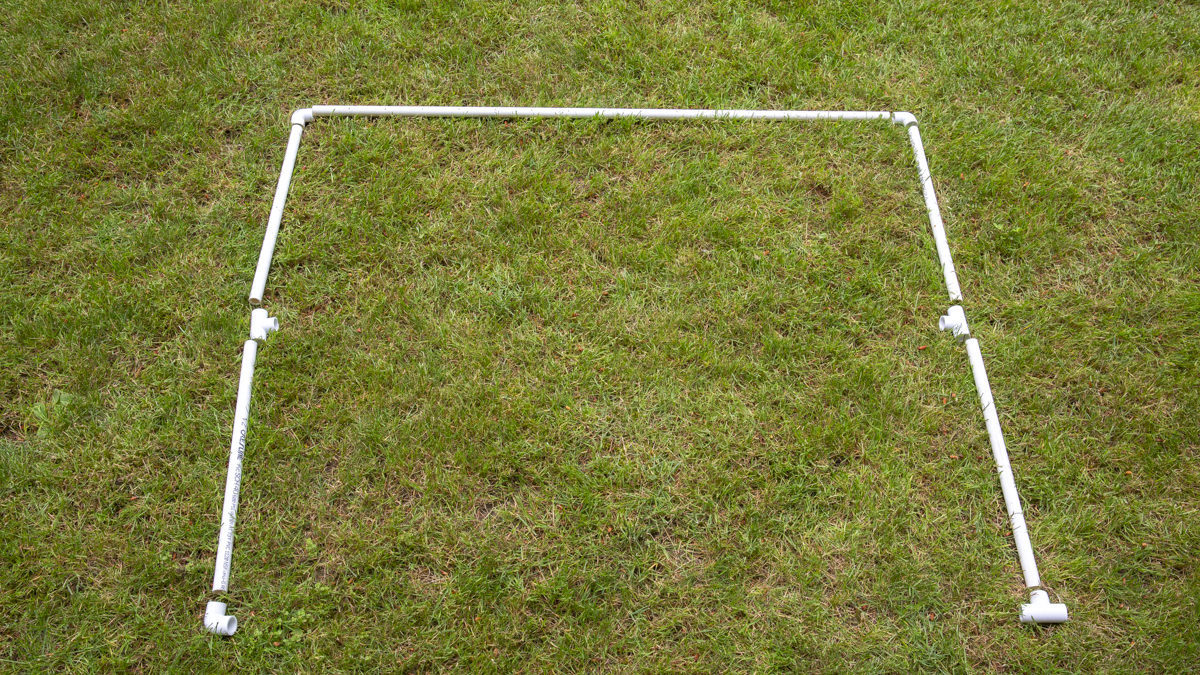 Now that you have the three arches assembled separately, it’s time to connect them. Do this at the bottom and in the middle with the 5’ pipe lengths.

This process has a little trial-and-error. Because the PVC pipes are somewhat unwieldy until everything is locked in place, it would fall apart as I was working on it. It helps to have an extra set of hands here to streamline the process—if not, just be patient. It’s sturdy once it’s put together! And if you want a little extra security, you can glue parts of the structure together with PVC glue. Just keep in mind how you’ll be storing it—you want to be able to take it apart enough to put it away during the cold, rainy months.

Use the slider to learn how to assemble your DIY slip-and-slide arches:

Step 8: Assemble Base of Slip-and-Slide Frame

Next, make the frame. We’re starting at the end where all the water collects. Butt the wide angle of the angled two-by-six up against the sides of the 49” two-by-six. Position a corner brace around the outside, and secure only to the angled two-by-sixes. By doing this, the 49” piece can fit inside when the slip-and-slide is being used, and it can be easily taken out to drain the pool of water that’s gathered at the base of the slip-and-slide. 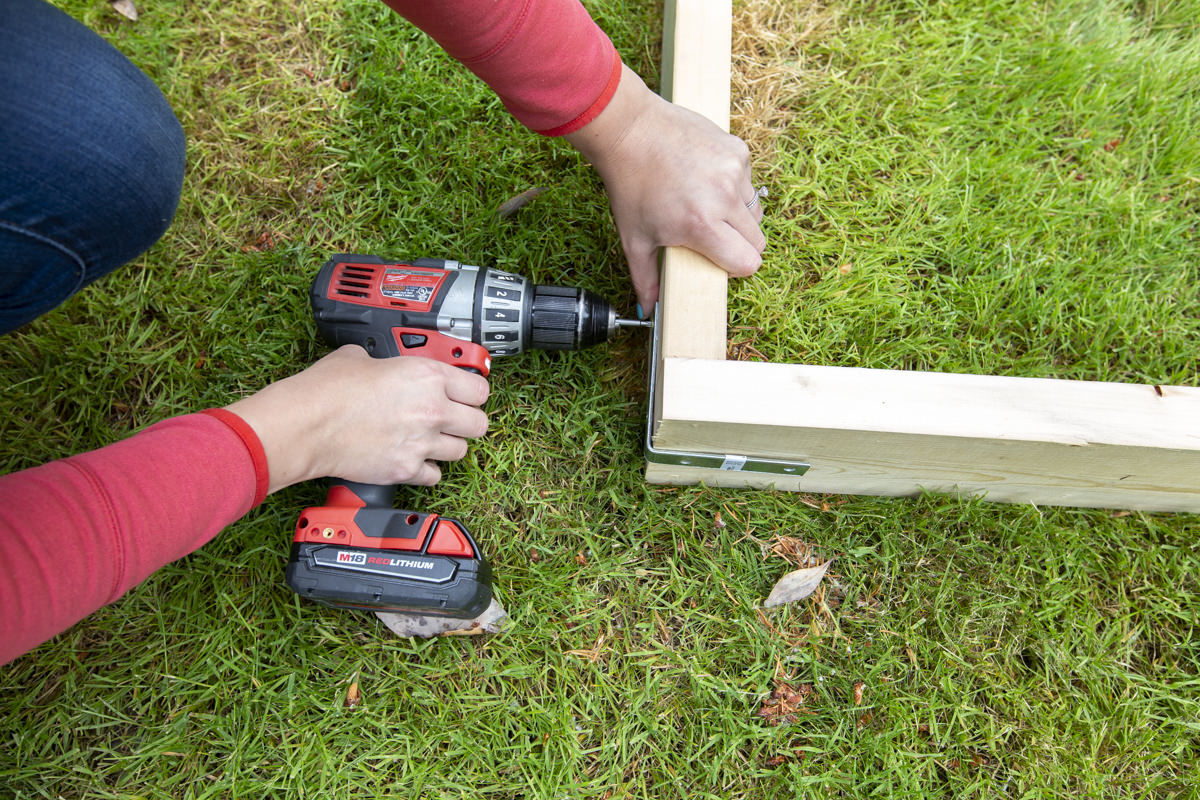 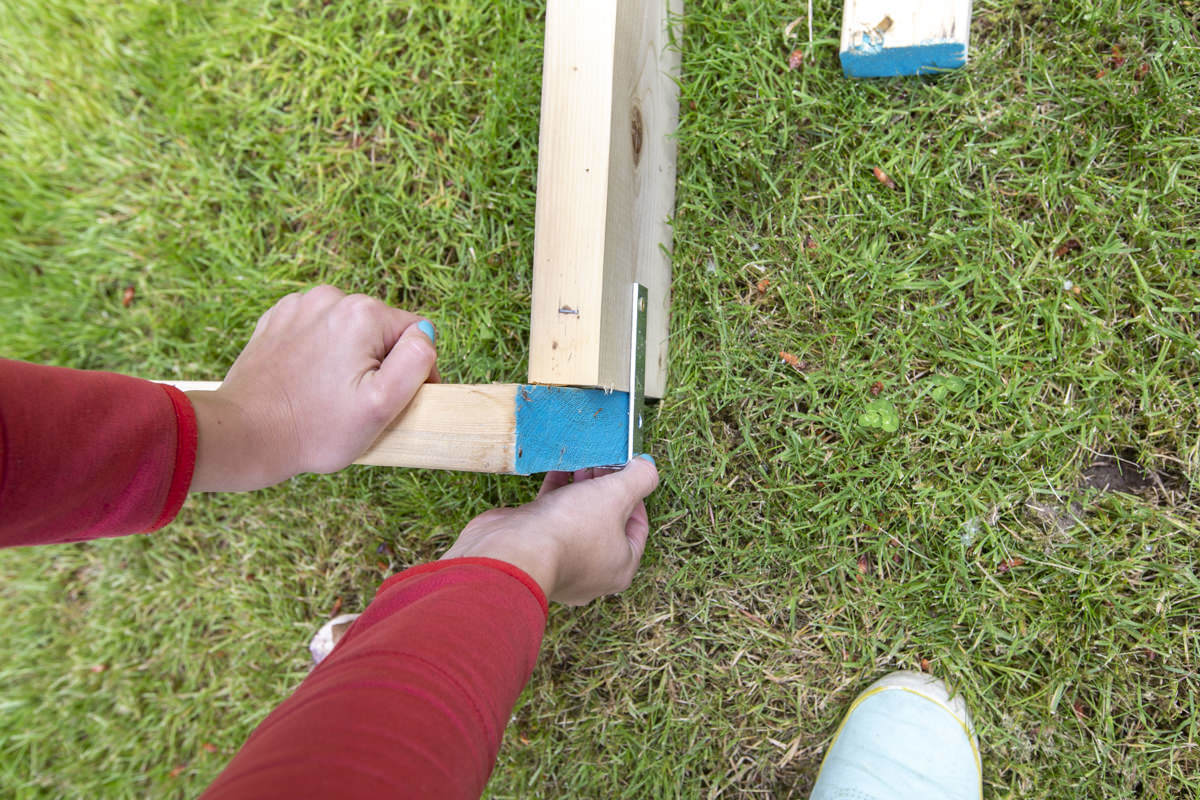 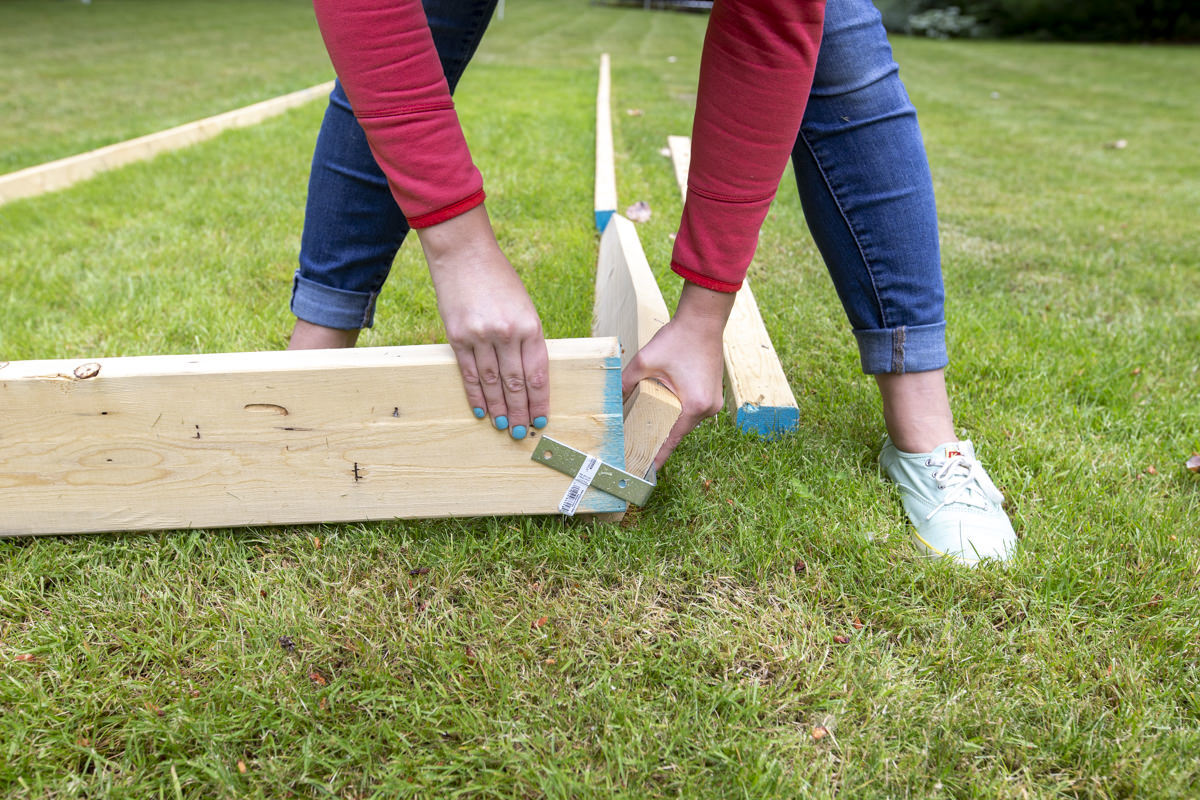 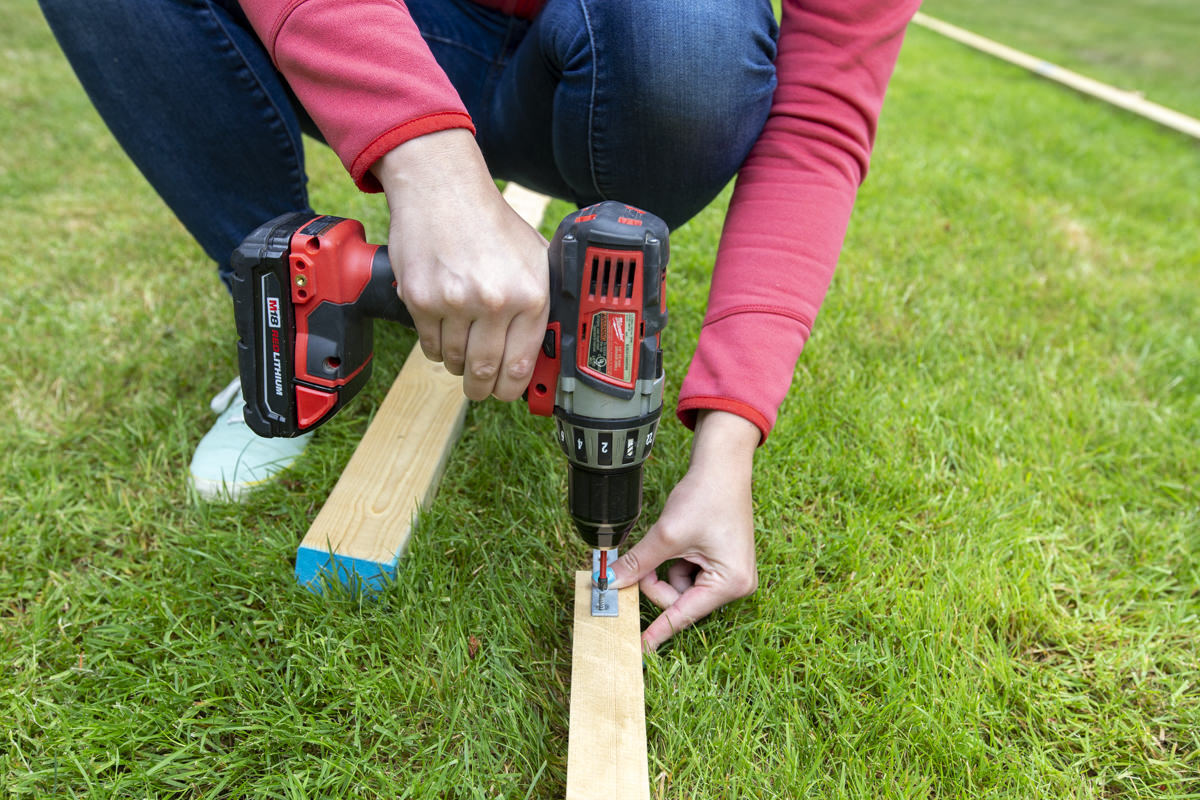 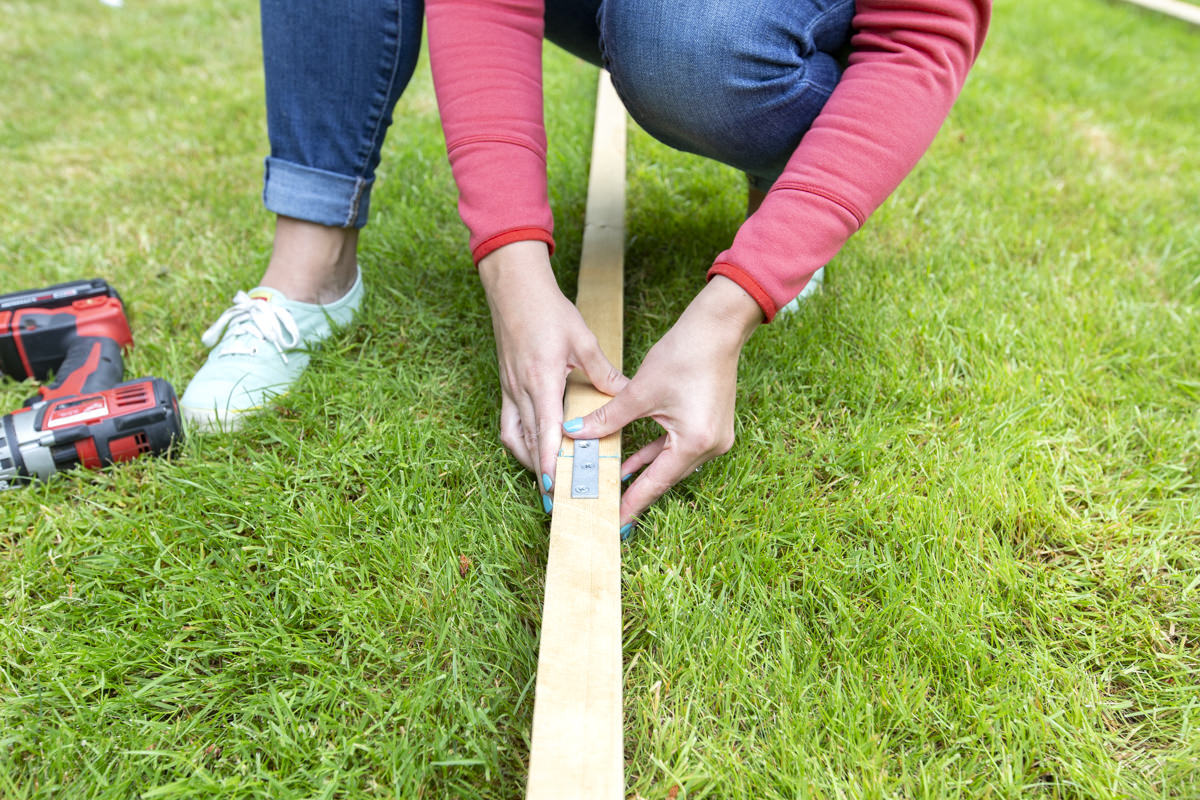 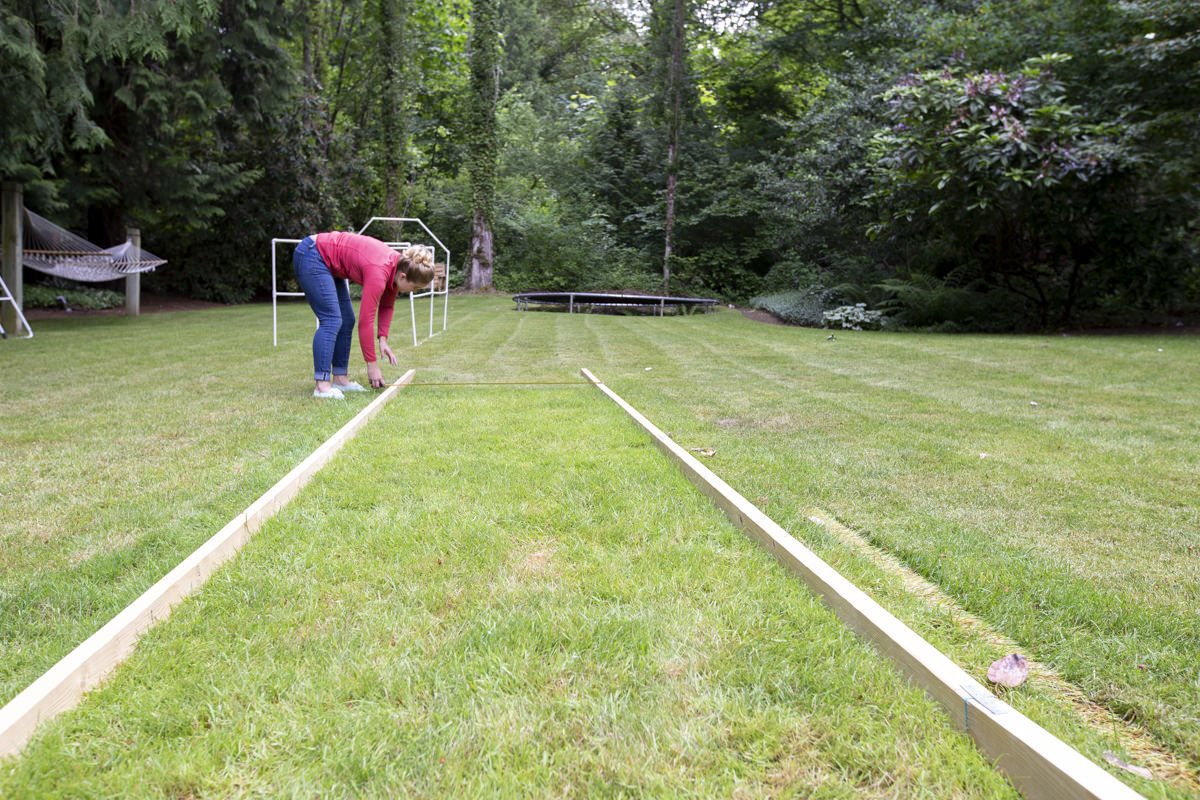 I used a 3.5mm-thick polyethylene sheeting (which seemed plenty thick to me), but you can find some that are 4mm, or 6mm thick if you want something that’s a little sturdier. Place it over the slip-and-slide frame, cut off the excess, then tuck the edges under the outside of the wood—think of it like the top sheet on your bed. Don’t pull it too tight, or the pool noodles will pop off any time someone slides down. There should be a little bit of slack. 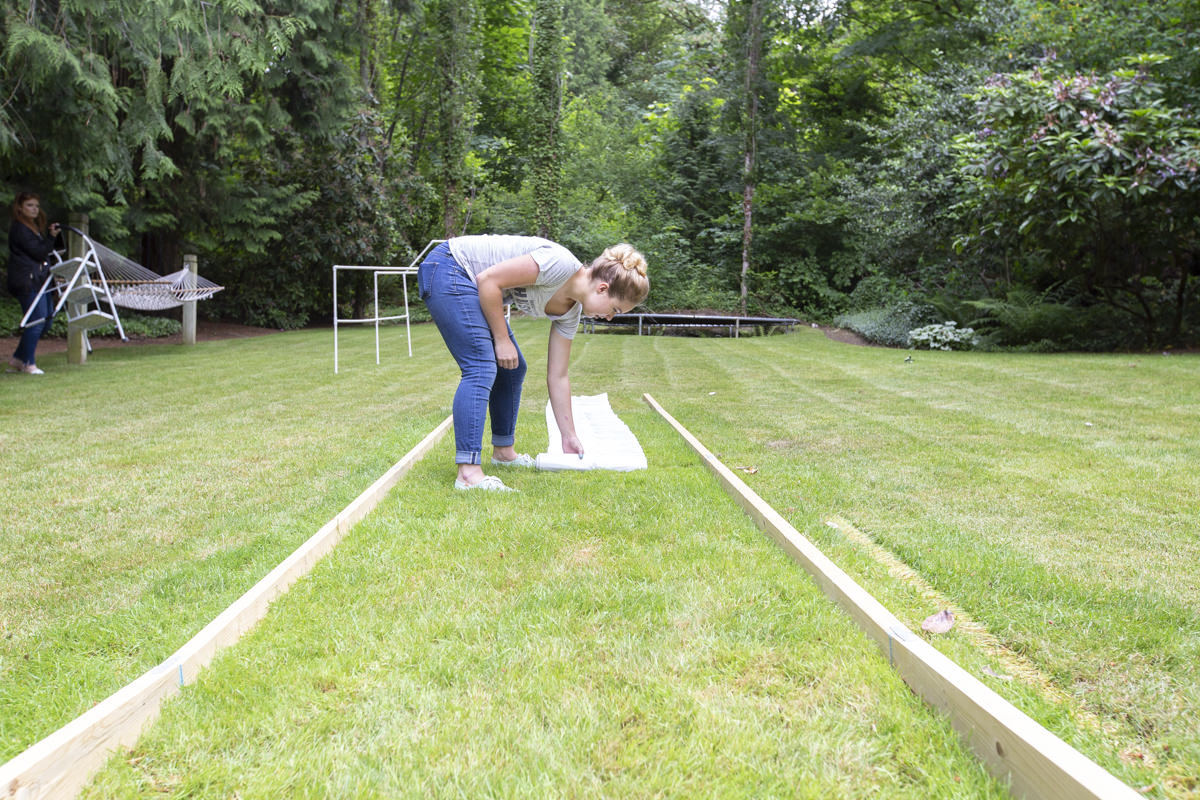 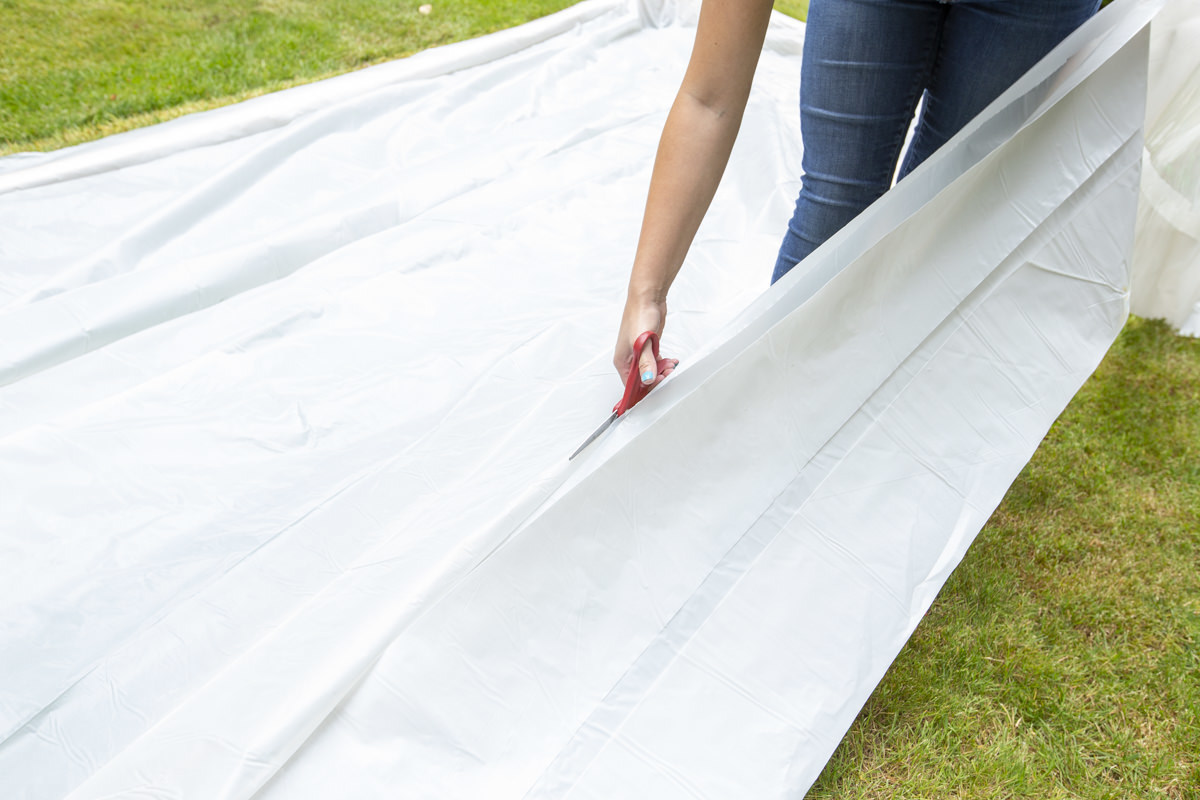 I originally looked online for pool noodles, but found them to be more expensive than I wanted, and a pain to ship. I found these at Target, and you should be able to find them at your local department or sports store as well. I went with rainbow colors, but you can choose whichever you’d like!

The noodles serve a few purposes: they’re pretty, they hold down the plastic sheeting, and they act as a bumper. Attaching them is easy—they hug right to the frame. To get them ready, use a utility knife to score the length of the noodle. Go over it once more, then pull the noodle apart. Try for a straight line, but don’t worry if it’s not perfect. Cut any pieces that are too long to size. Make a notch in the pool noodle at the corners, so they butt up nicely.

Note: the foam scraps from the noodles tend to get everywhere, so I’d recommend doing this part over plastic or somewhere where it’s easier to clean up. (Don’t do what I did, which was cut them on the grass.)

The next part is easy! Just pull them open and pop them over the frame. 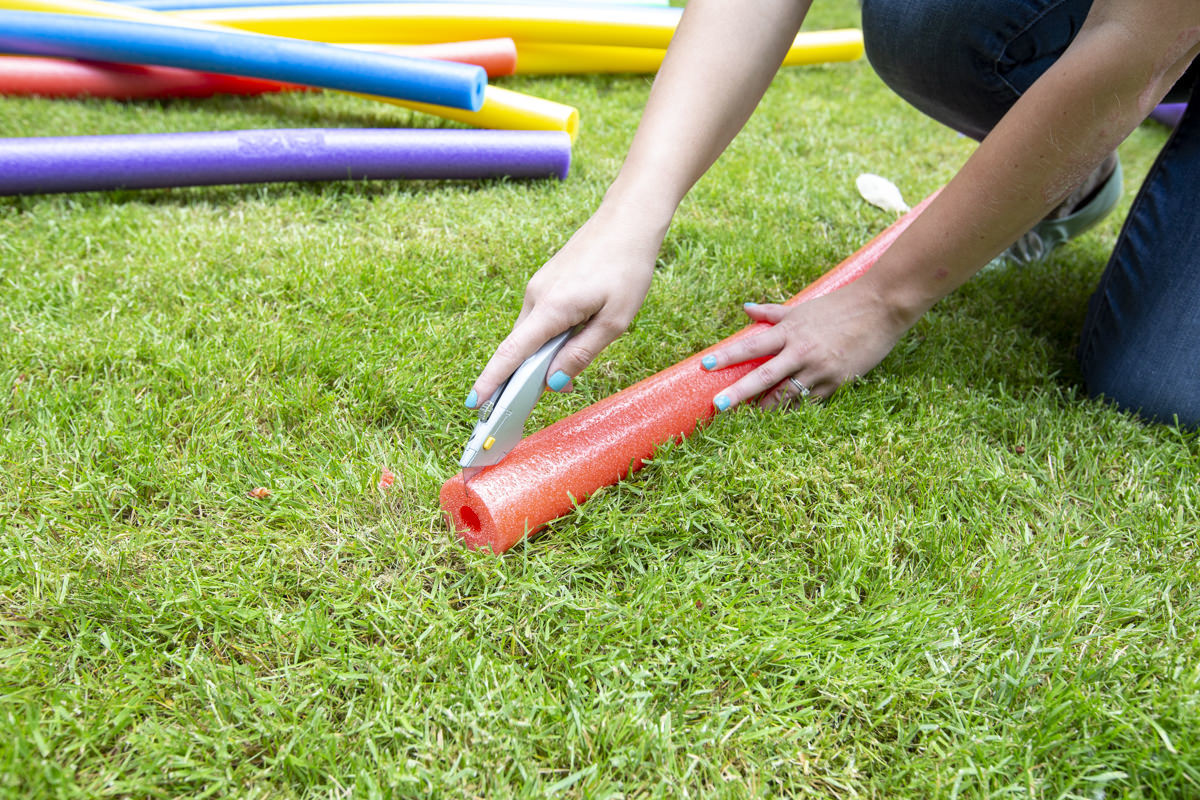 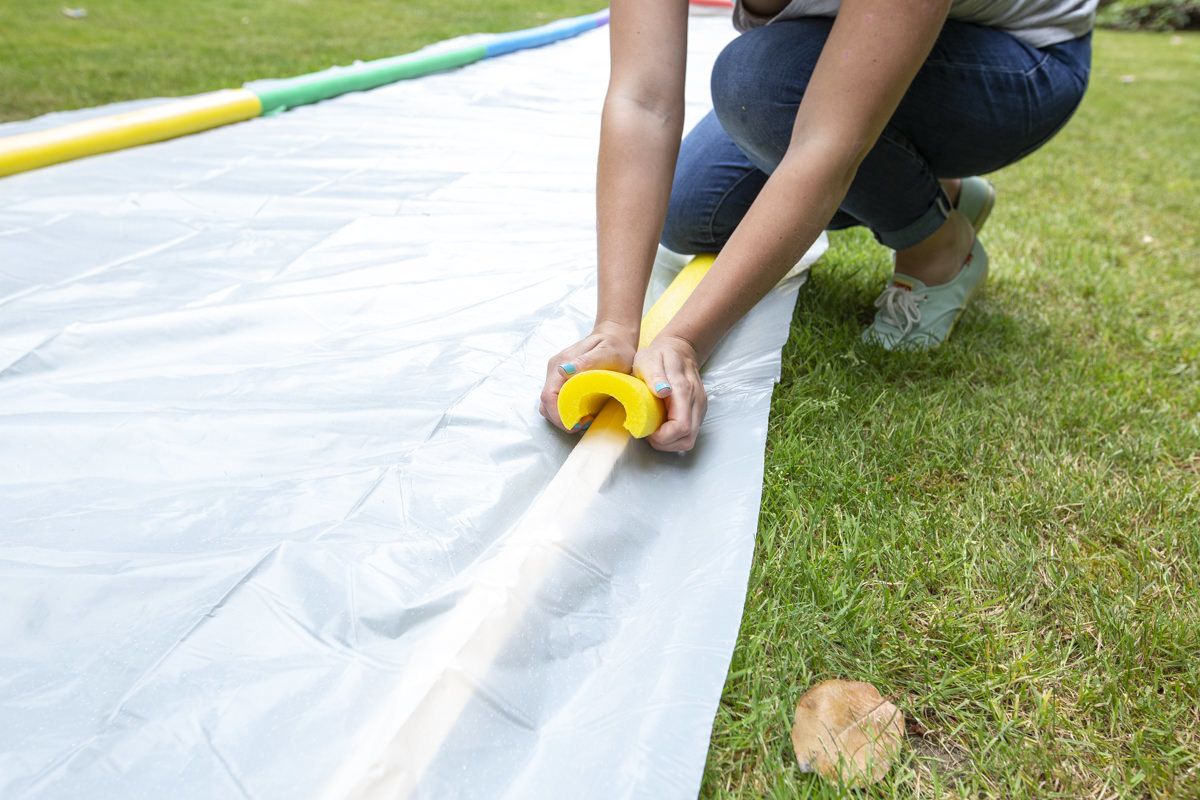 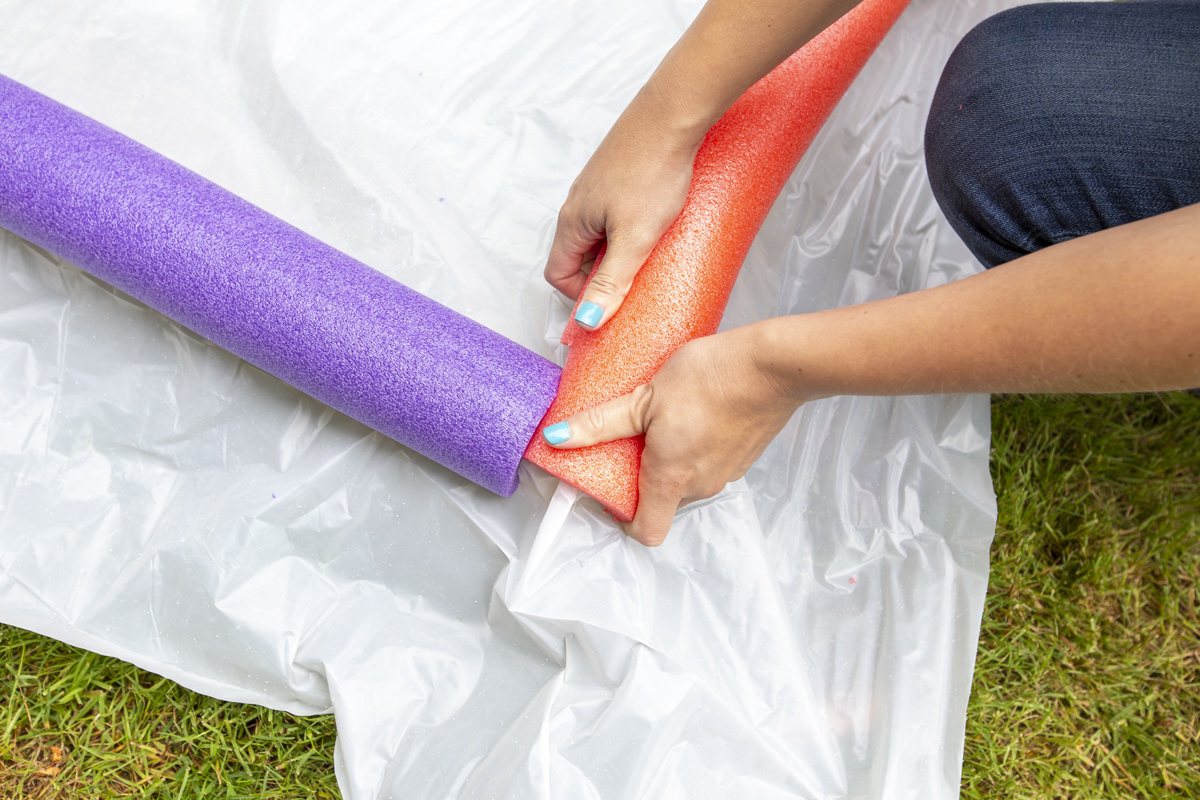 Now that everything is in its right place, it’s time to make it slippery! Attach your adapter to the hose, and then attach the hose to the PVC male adapter piece. Attach the opposite end to the 4” PVC length and insert into the tee at the bottom of the back arch. The whole PVC structure is a closed system with one opening, so it should be pretty easy to figure out where the hose goes.

Now the only thing that’s left to do is turn on the water! For extra slipperiness, throw on some tear-free baby shampoo. So fun! 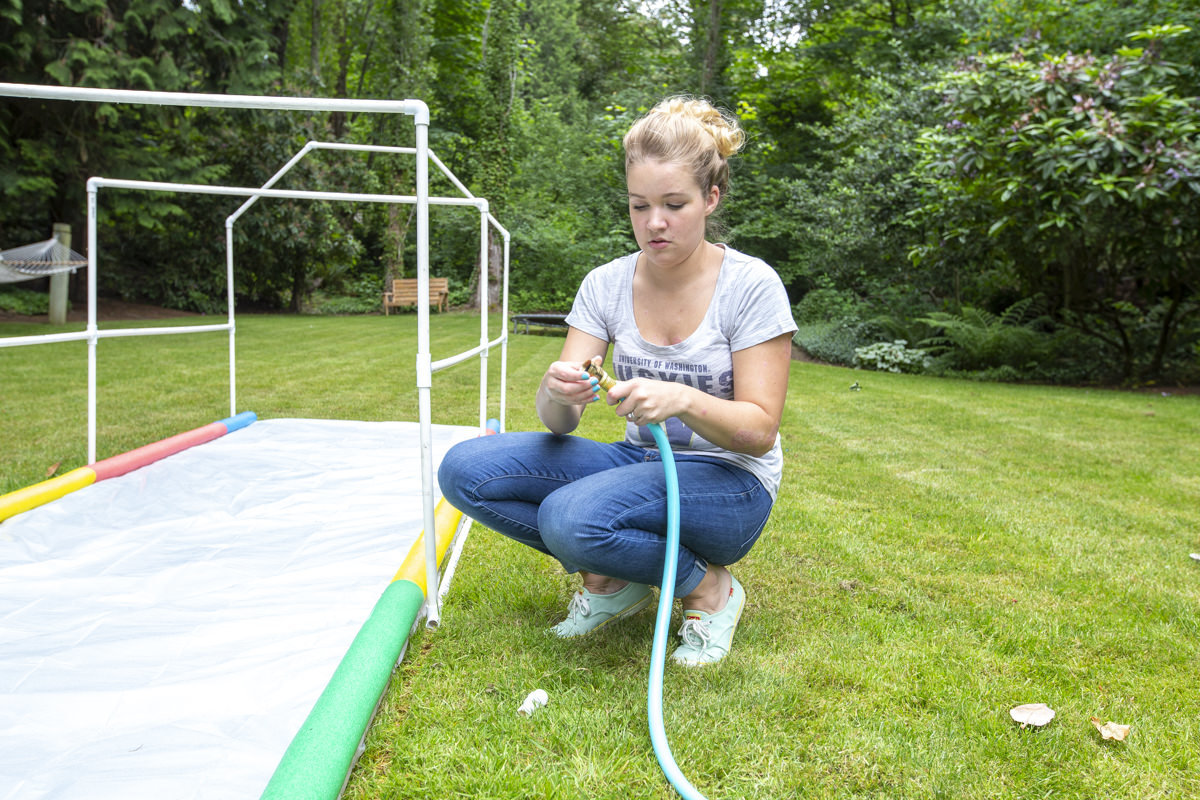 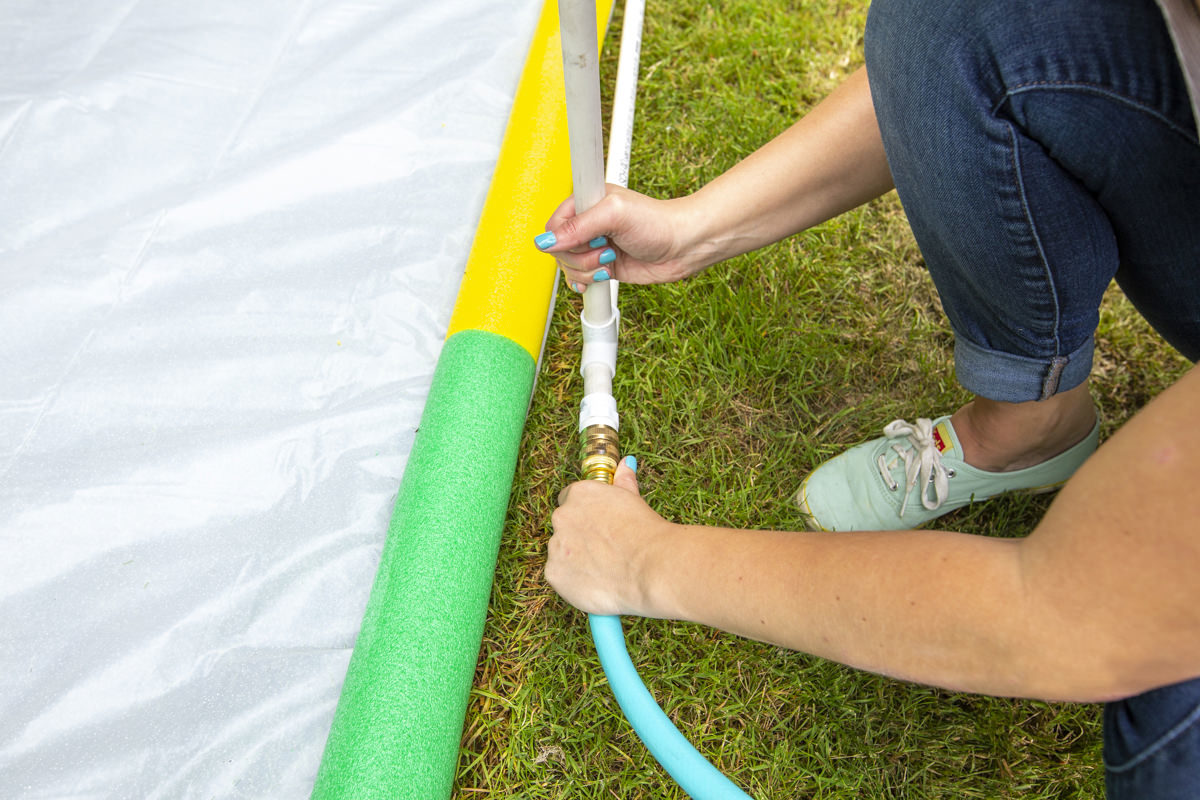 I invited my friends’ kids over to test it out—they were big fans of the pool of water at the bottom of the slip-and-slide, so I’m glad I made that design choice. There’s something nice about getting to play in water without trudging to the pool or the lake, and it’s a great attraction for a backyard barbecue. Plus, I always love a project that can be assembled and disassembled, and this one does just that. Now grab a popsicle, build a slip-and-slide, and enjoy! 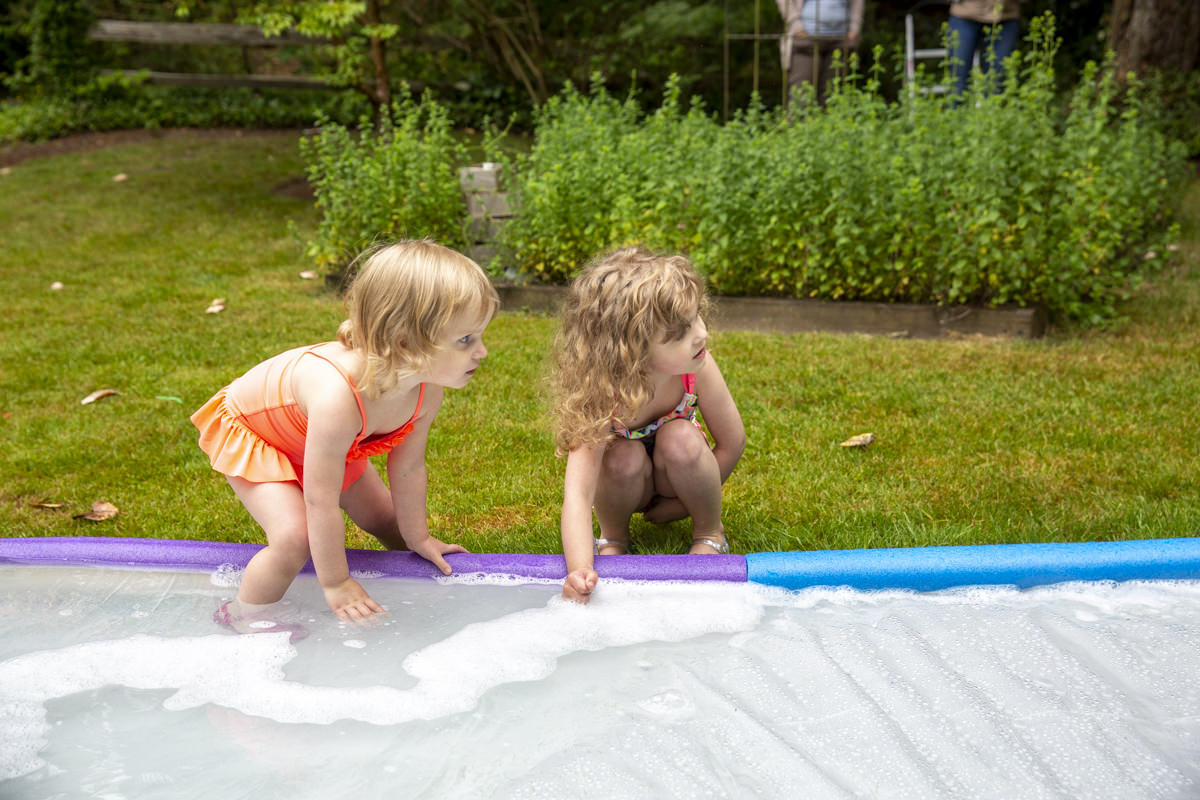 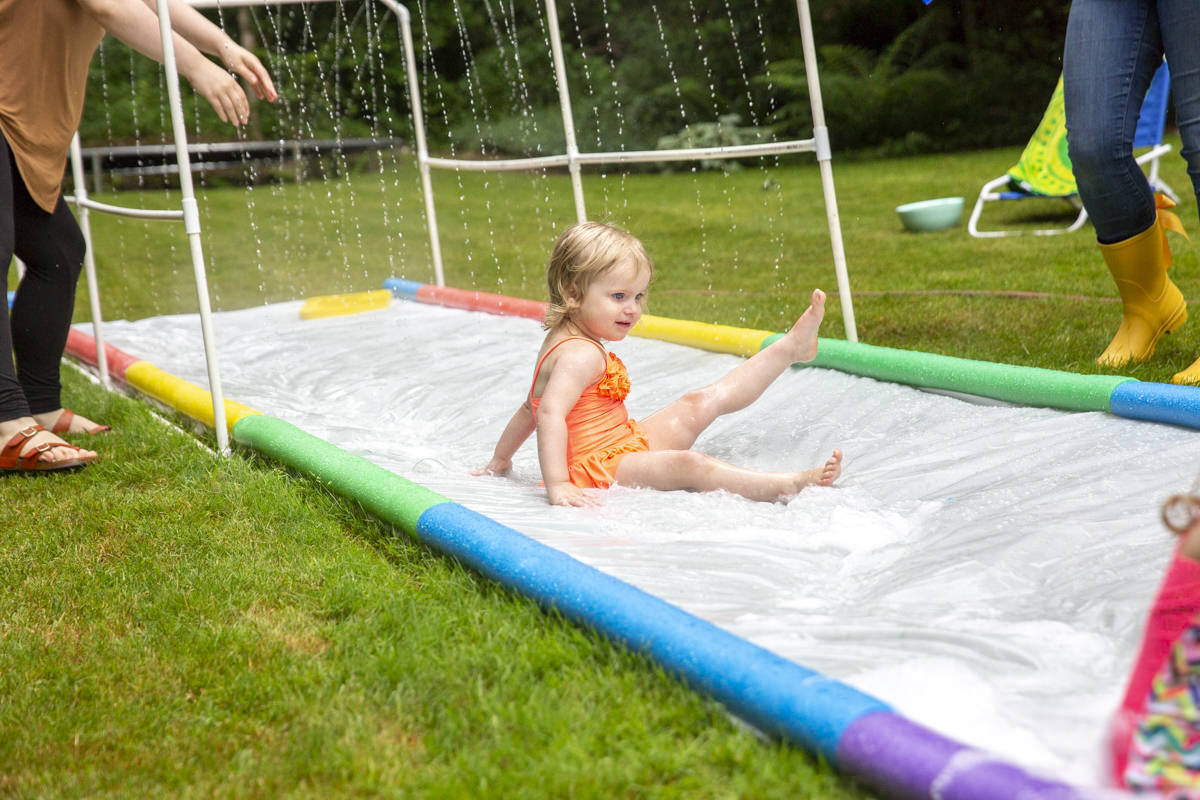 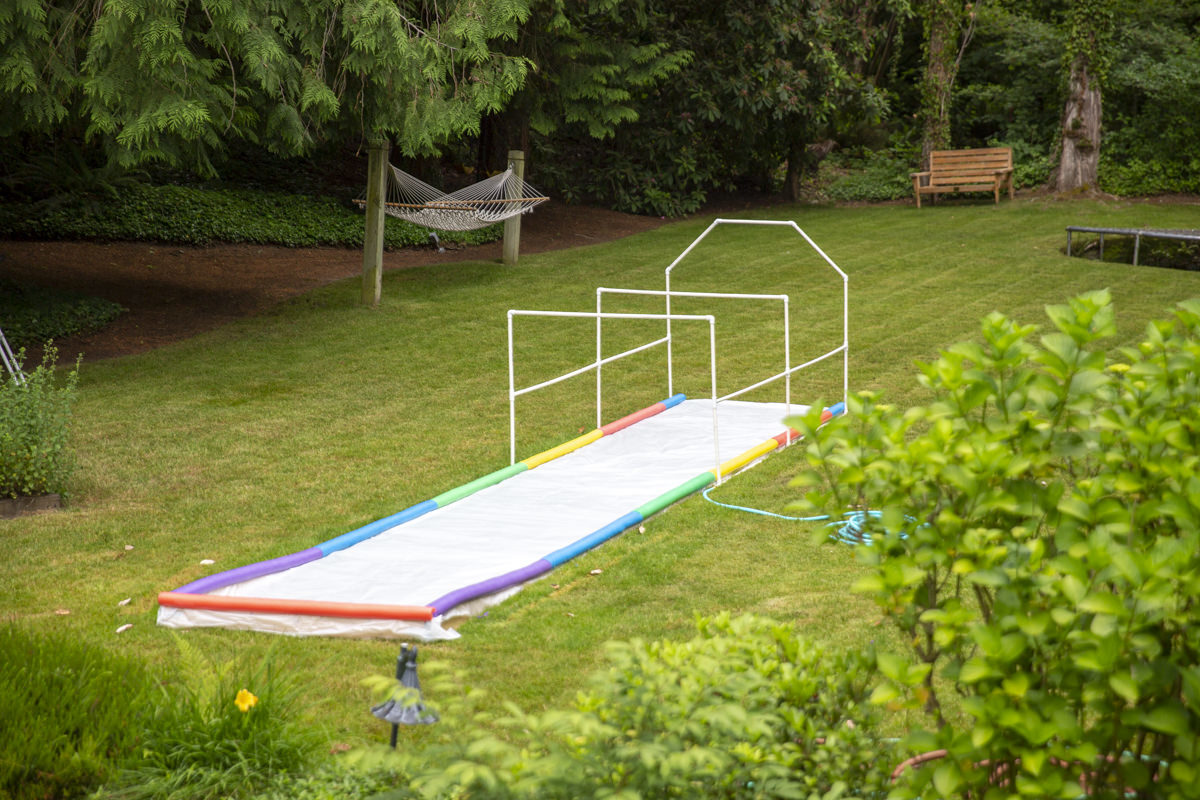 Tools 101 Series: How to Use a Square

In this installment of our Tools 101 series, we discuss the square.

How to Make a Mid-Century Bed Frame

Some of our friends recently moved into a new home and were in need of a bed frame. After chatting through some concepts, we came up with a sleek, simple bed frame based on this concept—and we were able to make it for under $100!

Six Projects to Make with Materials You Have at Home

Make the most out of your time at home with these six simple projects—all made with materials you (hopefully!) already have around the house.