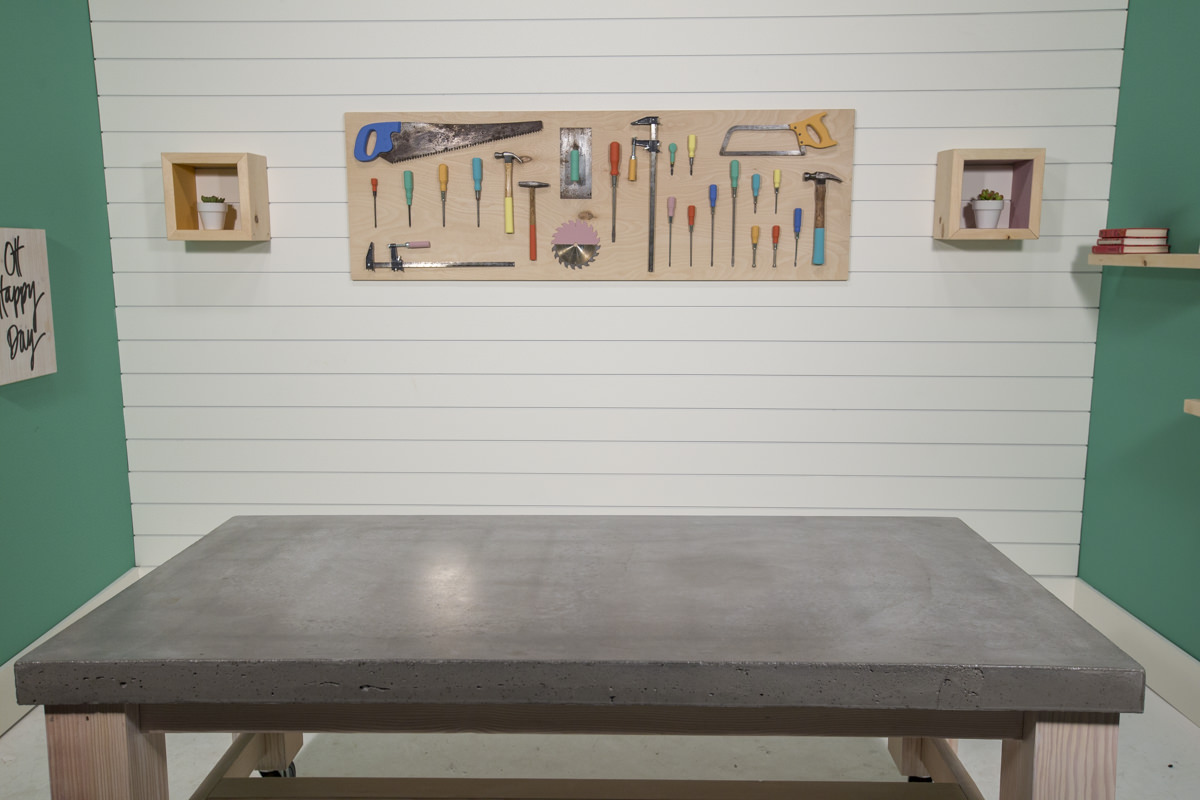 Big news! Dunn DIY got a serious backdrop upgrade. As you can see, the space looks a little different. We’ve spent two and a half years building DIY projects in an office, in parking lots, in apartment buildings—basically wherever anyone will let us sand, stain, and use a drill. We’ve finally moved into our own studio! It’s a space that’s exclusively Dunn DIYs, and I am very excited to no longer have people give me weird looks when I’m spray painting or sawing lumber in a parking lot.

Of course, the studio ended up being very DIYd: Robin Daly helped us pick out paint colors, and all of the shelving and accessories in the studio were built by hand, by us! And of course, there are succulents everywhere, because I love succulents. 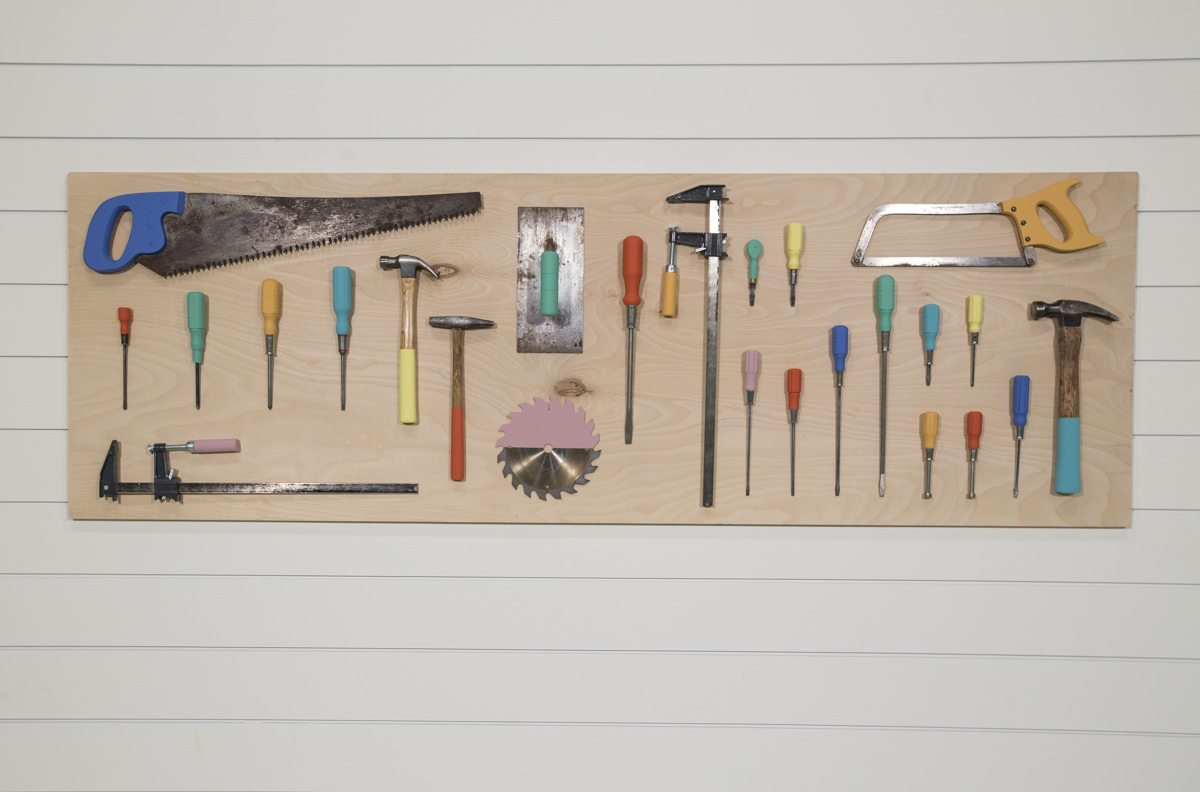 A while back, I stumbled across a hanging light that looked like a cloud and had multiple lights in it, and speakers, and it could be a dining room light fixture or you could set it up so it thundered and flashed lightning. It was this beautiful, very cool, interactive work of art...and it cost over $3,000!

So of course, I set out to figure out how to make my own. After doing some research, I found a bunch of super-simple, twinkle-lights-in-stuffing Pinterest renditions, and I thought I could get a lot closer to this artist’s rendition without spending so much money.

A big part of this is the interactive light inside the lamp. I was familiar with FluxSmart light bulbs; they’re “smart” light bulbs that connect with your phone and sync with music.

There were a lot of test runs on this project. The first time I did it, I worked with a really small paper lantern and I loved the way it looked, but it wasn’t big enough. So I tried the project again with a big lantern, and this time it just looked like a giant cotton ball. The lanterns are round, so in order to make it look like a cloud, you want the shape to be oblong.

I tried a lot of things, but in the end I ended up back at the beginning. I picked a 10-inch paper lantern and put a lot of thought and care into making it oblong. I spent a lot of time thinking there was a better option, and then realized after lots of work that the simple thing was the best. Go figure.

In the end, I really love the way this LED light looks. I honestly love living in grey, gloomy Seattle, and there’s something about bringing that atmosphere indoors that I think has such a cozy feel to it. It makes me feel like I get to be out in the weather and still be inside wrapped up in a blanket at the same time. And I get to be in control of the weather! I’m a total sucker for a thunderstorm, and the idea of being able to have one on command is so fun.

Assemble the paper lantern according to the instructions that come with it.

There’s a hole at the bottom of the lantern that you’ll want to cover with stuffing, so I taped a piece of white cardboard in the hole with packing tape, so there’s something for the stuffing to attach to. 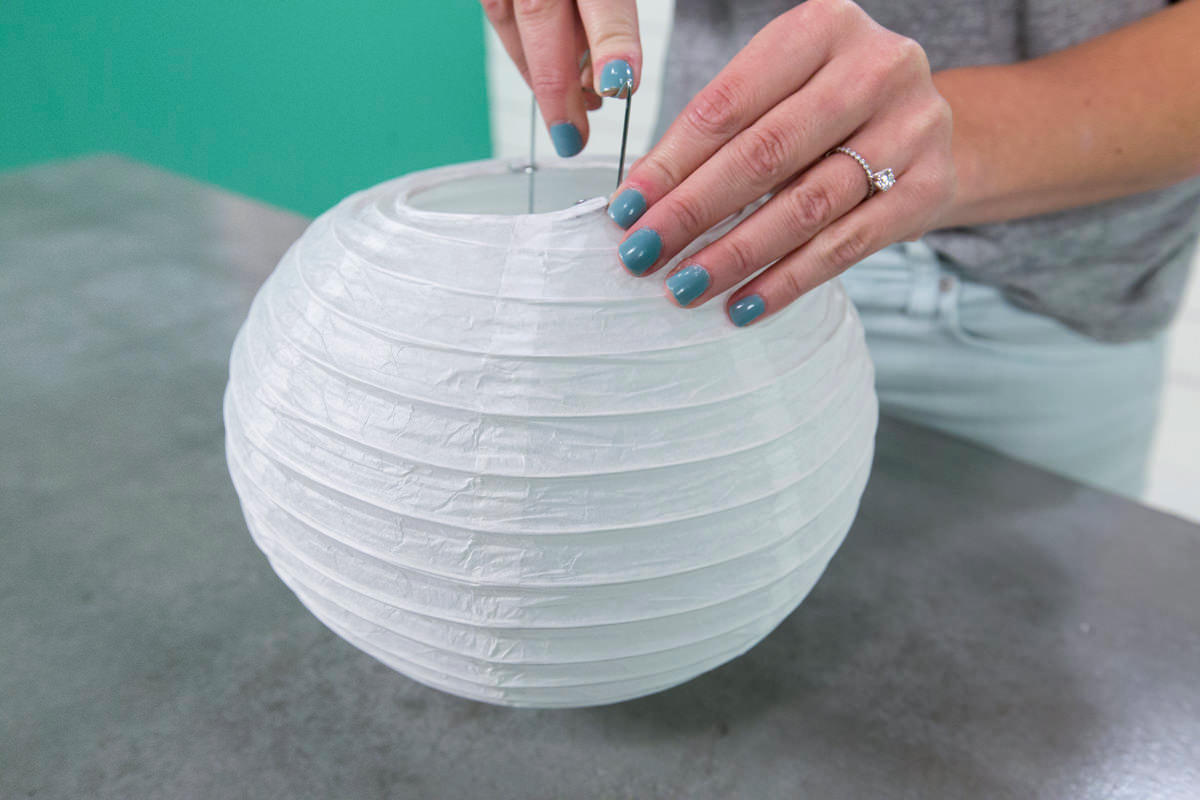 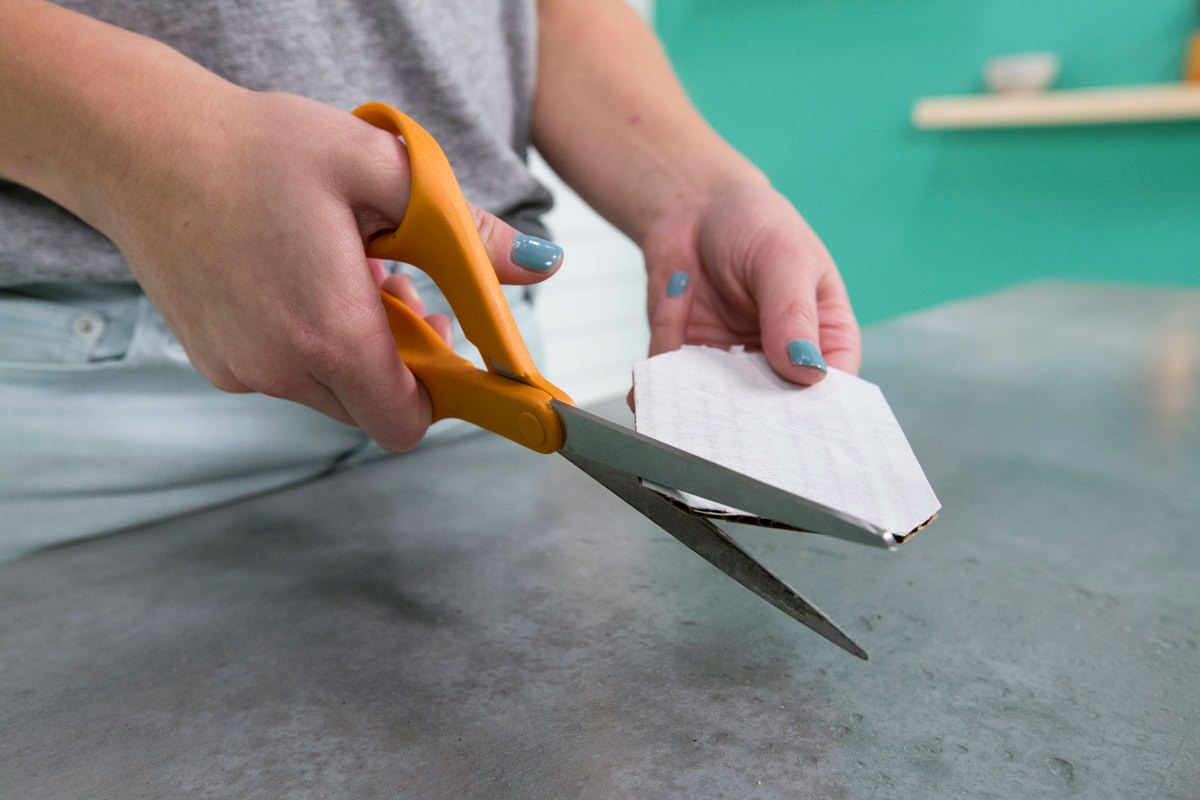 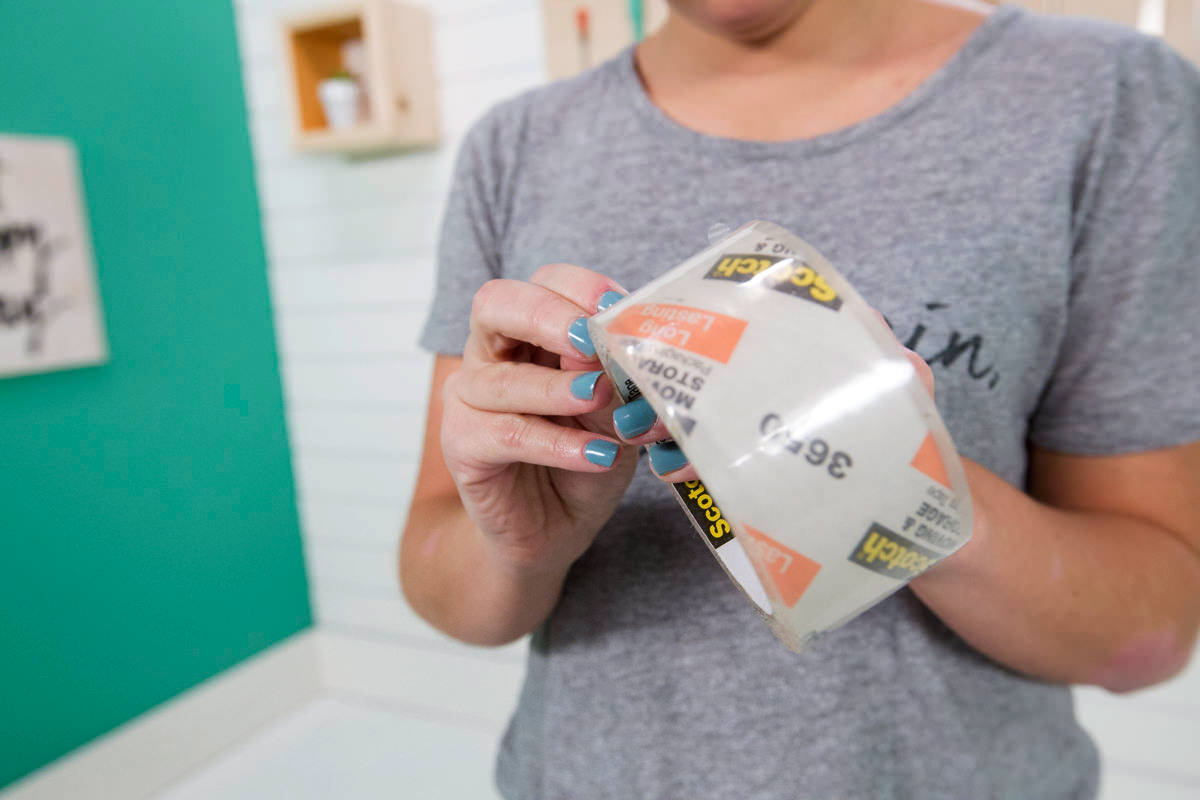 Step 2: Attach Fiberfill to the Lantern with Hot Glue

This is standard "polyfill", or polyester stuffing, like you’d use for filling stuffed animals and pillows. If you’re in a craft store, there’s another similar-looking material called batting, which is what you put in a blanket to give it thickness. It’s pretty easy to see in the store that one of them is conducive to being stuffing (polyfill) and the other is a sheet (batting). Batting is much more matted and stuck in its form. But just in case, I bought both and tried them, and there was just no comparison: polyfill is the way to go.

The stuffing isn’t substantial, and you’re applying hot glue to it and then adhering it to the paper lantern. I found the best thing to do was shape the stuffing. It’s very malleable; honestly it’s kind of like working with clay. You kind of figure out the shape you want, then you drizzle the hot glue onto it, as opposed to having the tip of the gun against the stuffing. So you’re going to end up using a ton of it—more than you’d think you need for the weight of the stuffing.

Once you’ve put the glue on the stuffing, get it onto the lantern as quickly as possible. It’s a really forgiving material to work with. If you rip a big chunk off, you can mold it back into a cloud shape and make it work again.

Keep an oblong shape in mind and manipulate the stuffing to get that look. I found that keeping it in mind as I’m gluing stuff on and trying to make the stuffing thicker on two sides and thinner on the other two sides helps, and then after that just gluing more fluff onto those ends, kind of building off of that and pulling it out. When everything is glued in place, you can pull and fluff it out and manipulate it from there, too.

After you’ve gone from top to bottom or bottom to top, go back and pull the stuffing apart and see if there are any spaces where you can still see the lantern, to make sure you’re not missing any spots. If there are any gaps, glue a piece of stuffing there, because the stuffing tends to sag and shift and you’ll see the bald spots later, and your cloud will look very sad. 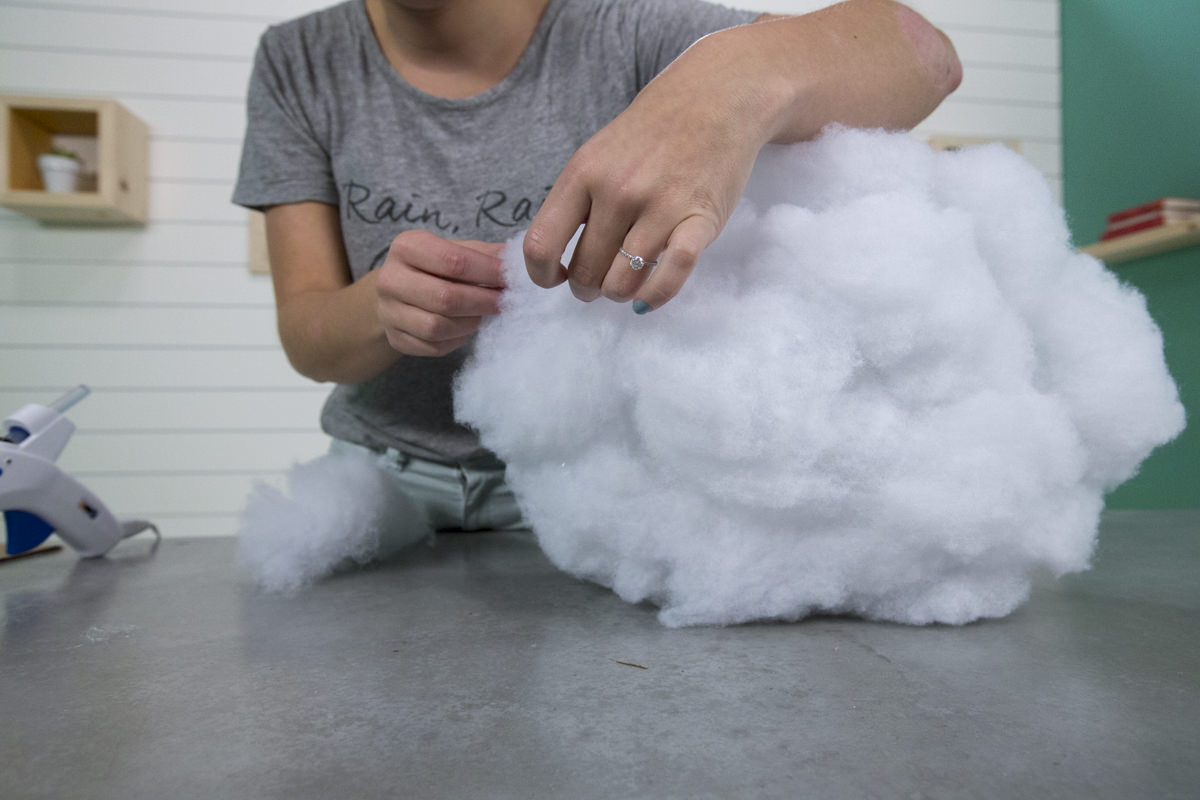 Step 3: Screw in the LED Bulb

Screw the light bulb into a hanging pendant lamp cord.

There’s the little wire bar that goes across the top that keeps the lantern open, and the light bulb and the head of the cord are too big to fit inside the paper lantern when it’s constructed with that wire bar intact. You have to unhook that and move it aside and get the light bulb in there, and then put the wire back in. It takes a little moving around to get it right.

Stick to an LED bulb for this project. There’s not a lot of space in the lantern, and LED bulbs don’t get hot like incandescent bulbs do. It would be a terrifying thing if all that polyfill went up in flames! 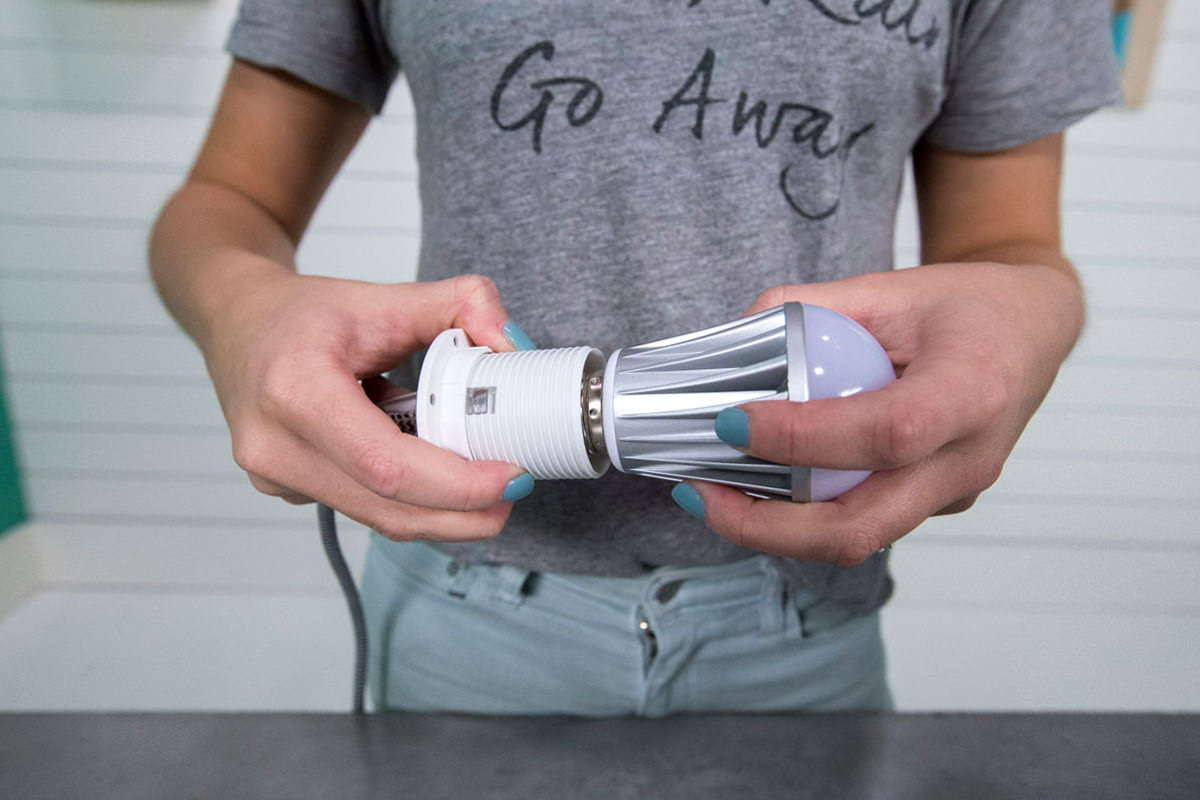 Smart light bulbs are connected to your phone, so you can use Bluetooth to turn it on, change the color, or even set an alarm so that you wake up to it turning on. You can program it to music so that it flashes with the beat, or if you buy a track with thunder on it, it will flash with the thunder, like lightning! It also has microphone sensitivity, so if you’re having a dance party it will respond to the sounds of the music playing and everyone dancing, which is what we did with my extended family on Christmas Eve!

Download a thunder and rain track to your phone. They are available for both iPhone and Android. In the FluxSmart app, there’s different sensitivity settings. I found that “jazz mode” was slightly more sensitive to the thunder—it lit up more and was a little more responsive, but it’s totally a preference. Play around with it! There’s also a big color wheel that changes the color temperature of the bulb. You can choose and save six favorite colors, or you can spin around on the wheel to get a random color.

I love the way this project turned out. I have one of my prototype lamps hanging in my bedroom, and I spent a lot of time just sitting and watching it thunder. And I can honestly look at the $3,000 light and say, obviously it’s better than the one we made, but I don’t think it’s $3,000 better!

This was one of the many projects that hit the point where I said "I can’t do it, it’s impossible." It sat in a box for a month, until I went back and said that I just had to do it; I had to make it work. The ever-true lesson in DIY is try, try again. Just because it didn’t work four times doesn’t mean it won’t work the fifth time. That’s just kind of what you have to live by if you want to do DIY. 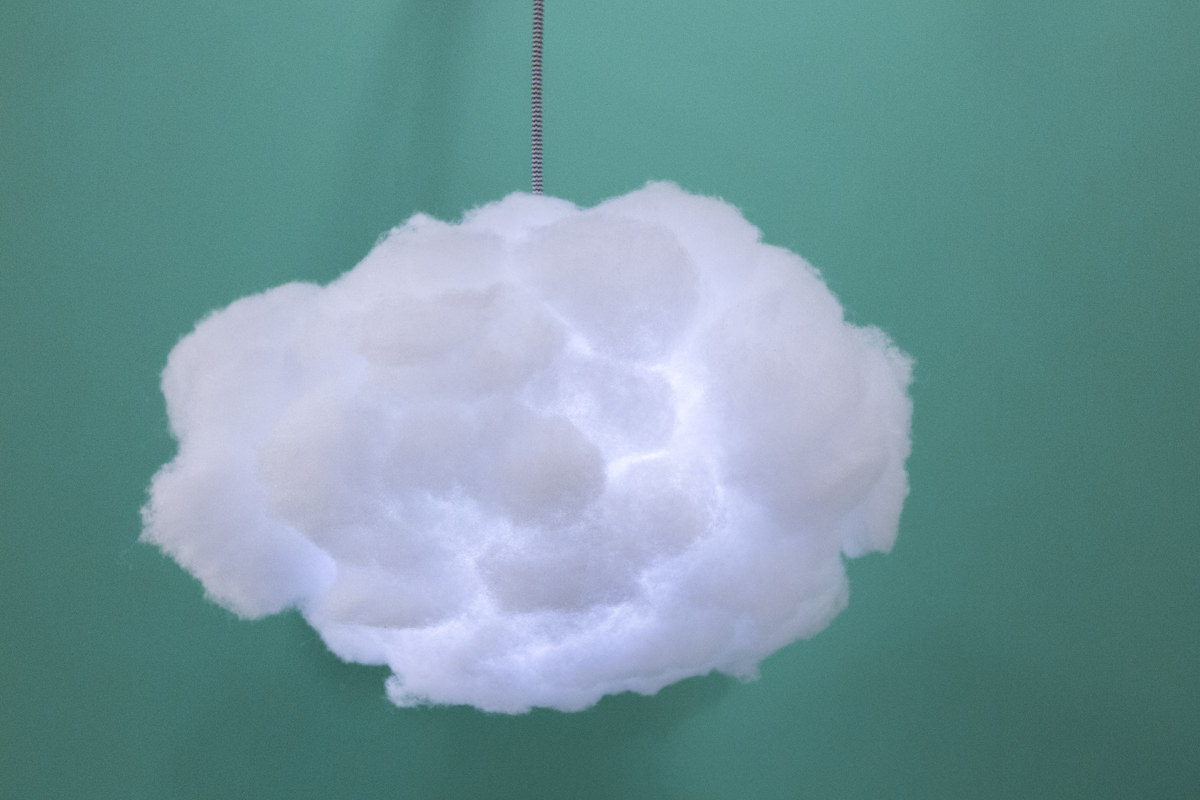 How to Refinish a Weathered Bench

There are some simple strategies to give new life to your old wooden outdoor furniture. This step-by-step guide to exterior wood refinishing is the perfect companion for a weekend DIY project. Clean, brighten, and stain your way to a great addition for outdoor entertaining!

How to Make a DIY Christmas Stocking

It doesn't take a lot of felt to make a decorative stocking that you'll cherish year after year.

How to Easily Install Outdoor Lights for Your Home